Thugga (Dougga) - page three
(detail of the theatre at Thugga)

You may wish to see an introductory page to this section or page one first. The latter provides an introduction to the visit of the town and a description of the monuments located at its centre, most of which were built during the reigns of Emperors Hadrian, Antoninus Pius and Marcus Aurelius (117-180 AD). This page together with page two illustrates the development of the town during the Severian Dynasty (193-235). 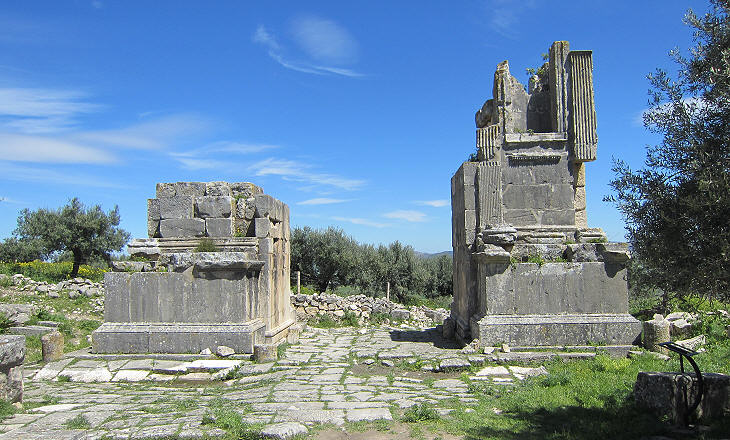 Pre-Roman Thugga was surrounded by walls which can still be identified at the top of the hill. Byzantine Thugga was protected by a small fortress built on the site of the Forum. Roman Thugga did not have walls, yet the limits of the town were clearly identified for taxation and other purposes (funerary monuments were to be built out of town). Roads linked Thugga to other towns of the Mejerda River valley, e.g. Thignica, and to the road linking Carthage to Theveste, in today's Algeria where Legio III Augusta was stationed.
In 205 a triumphal arch dedicated to Emperor Septimius Severus was built on the eastern access to Thugga. It celebrated the granting by the emperor of the rank of municipium to Thugga and its surrounding district. This concession increased the authority of the local magistrates and eliminated some legal differences between the descendants of Roman settlers and the peregrini, the local freemen.
In 225 another arch was built at the western entrance to the town. 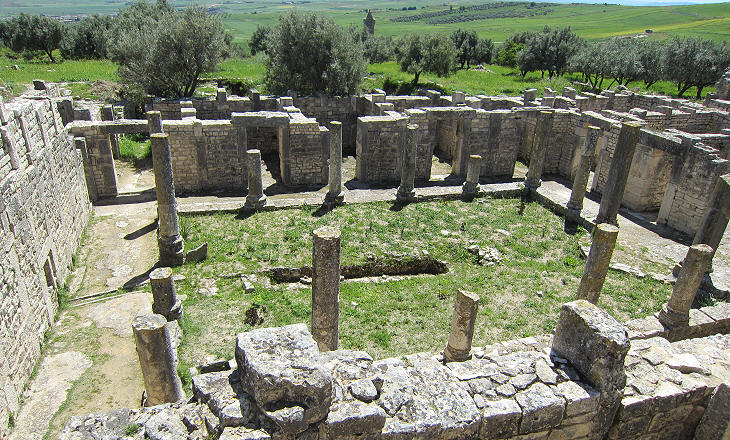 The eastern side of the hill where Thugga is located is rather steep and the expansion of the town required extensive terracing. The main entrance of several houses was at the upper storey and steps led to the peristyle, the colonnaded courtyard around which the house was structured. The House of Trifolium was a large complex which must have belonged to very rich owners; today they might be turning in their graves due to the fact that their home is dubbed as the "Brothel of Thugga", because of a relief depicting a phallus found in the street leading to the house. In general these reliefs had an apotropaic (to avert bad luck) purpose and were placed even on the gates of towns (see Porta Minore at Alatri). 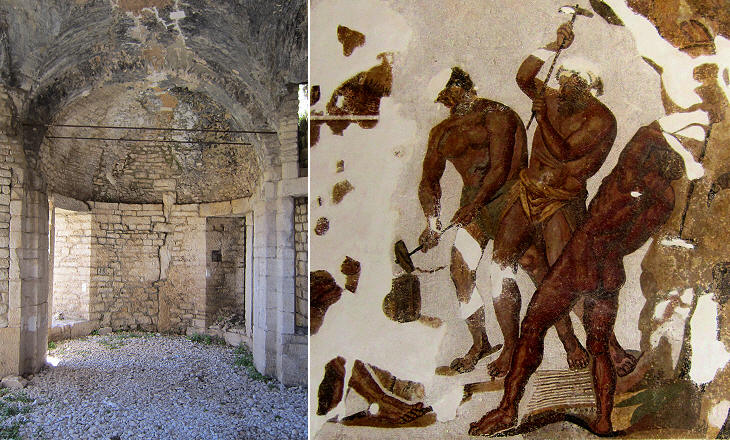 The house is named Trifolium (clover) because of three adjoining round halls which were the reception and dining rooms. The building is dated late IIIrd century. The property most likely included adjoining small baths where a mosaic portraying the Forge of Vulcan was found. It is a rather large mosaic which shows Brontès, Stéropès et Pyracmon, three Cyclopes, working on Zeus' thunderbolt with the assistance of Vulcan (partially visible seated, on the lower left corner). The alignment of the Cyclopes along the same axis must have required very careful planning and execution of the mosaic. The result is still impressive after 1800 years and one can feel the sweat on the Cyclopes' bodies and imagine the noise of their hammering. 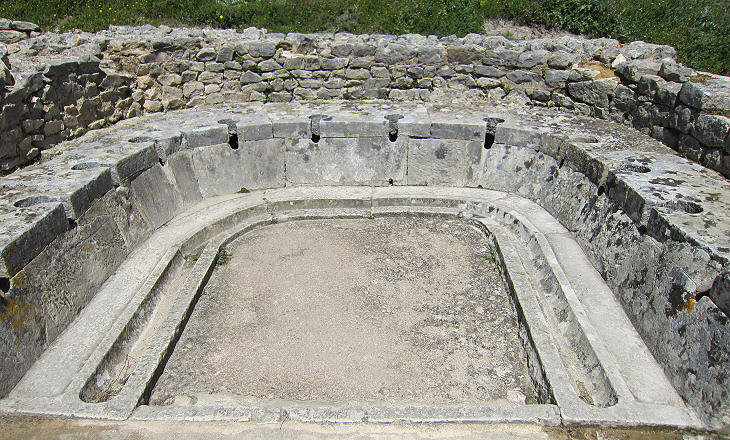 The baths had another surprise for the archaeologists: latrines in excellent state of conservation. One wonders whether group psychotherapy sessions were held in this very comfortable setting. Latrines were usually one of the most decorated parts of Roman baths and their technical design was very similar throughout the whole Empire from Ostia to Corinth and to Leptis Magna. For a cosier design see the latrines of the Baths of the Fishing Angels at Uthina. 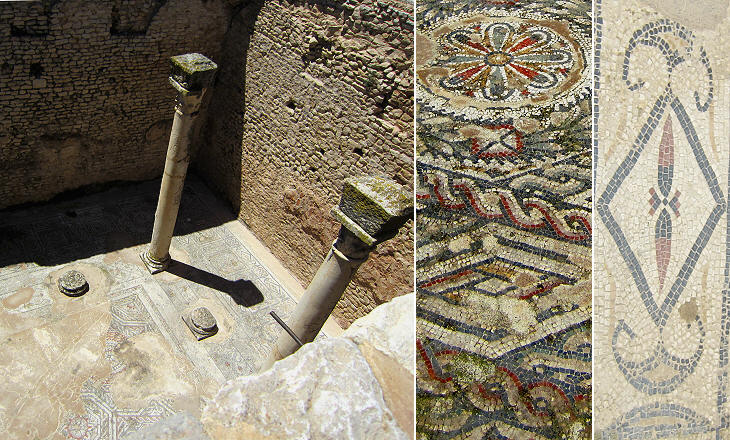 The inhabitants of Thugga had a choice of baths where they could go to relax. Those closest to the Forum are called Licinian Baths, because of an inscription making reference to Emperor Gallienus (260-68) of the Gens Licinia, but they are now thought to have been built at an earlier time, probably during the reign of Emperor Caracalla. Similar to the House of Trifolium they had the entrance at the upper level and stairs led down to a large hall with a portico and mosaics, a feature which characterizes many houses of Bulla Regia. 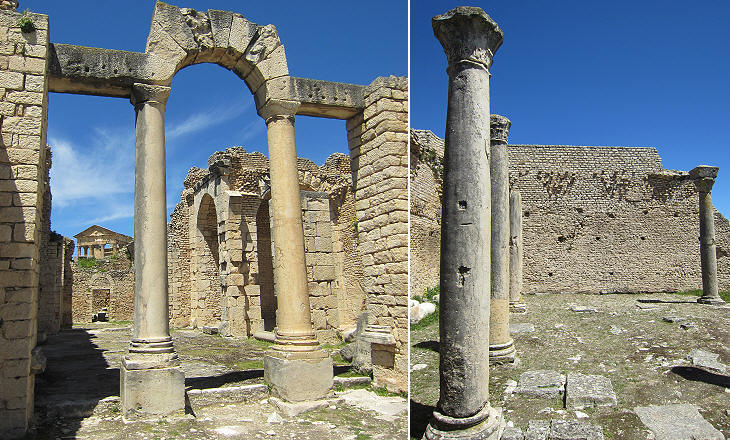 Halls of the Licinian Baths: (left) "frigidarium" (cold room) with the Capitolium in the background; (right) an ancillary hall overlooking the countryside

The halls were arranged along an axis which led bathers through the frigidarium to the tepidarium (mild temperature room) and to the calidarium (hot room). Dressing rooms and palaestrae (wrestling schools) stood at the sides of the main halls. You may wish to read a description of a day at the baths by Seneca with images of the Baths of Caracalla in Rome. 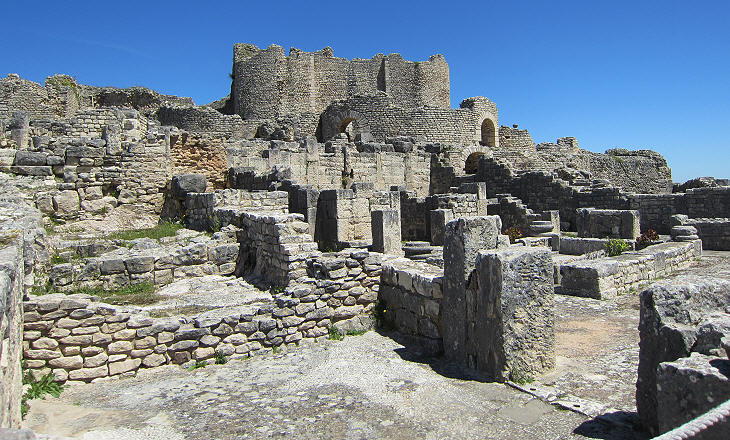 Houses and the "calidarium" of the Licinian Baths (photo taken at 1:00 pm)

Vitruvius, the author of De Architectura, a treatise on architecture which was rediscovered in 1414 and influenced many Renaissance architects, gave precise guidelines on the orientation of the baths and in particular of the calidarium. In order to minimize the cost of heating, he recommended that the hall should receive plenty of sunlight and therefore should be facing south and possibly south-west because people went to the baths in the early afternoon. The calidarium of the Licinian Baths was built in line with Vitruvius' recommendations.
The area beneath the baths was terraced during the reign of Emperor Gallienus to build a series of houses. 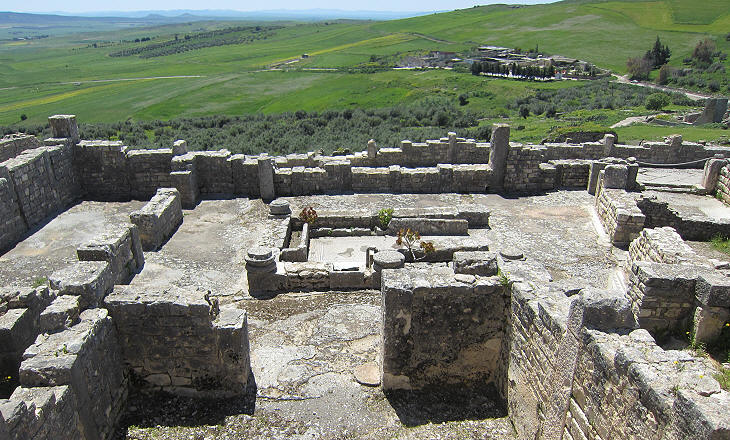 House of Ulysses and Dionysus and, in the background, Nouvelle Dougga, the new village where the inhabitants of the Arab town were relocated in the 1960s

Given the limited size of the houses, archaeologists who excavated them did not expect major findings. One of the houses instead was decorated with very well preserved mosaics. Those having a geometric design were left in situ (one of them can be seen in the image used as background for this page). Other mosaics portraying Ulysses and Dionysus were moved to the Museum of Bardo. 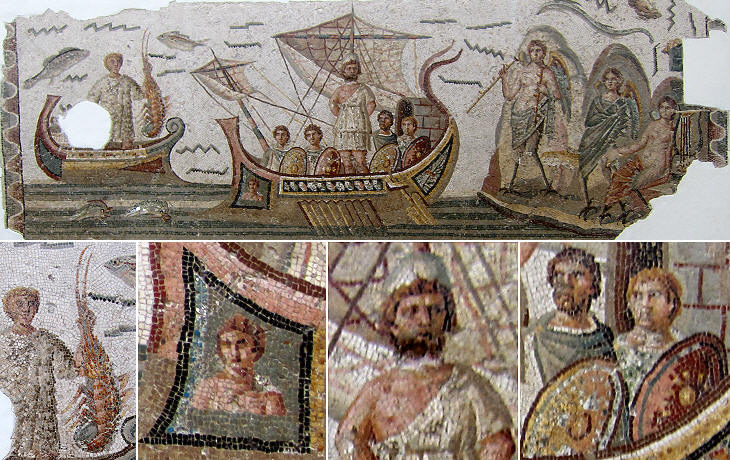 Museum of Bardo: mosaic portraying Ulysses and the Sirens

I had hardly finished telling everything to the men before we reached the island of the two Sirens, for the wind had been very favourable. Then all of a sudden it fell dead calm; there was not a breath of wind nor a ripple upon the water, so the men furled the sails and stowed them; then taking to their oars they whitened the water with the foam they raised in rowing. Meanwhile I look a large wheel of wax and cut it up small with my sword. Then I kneaded the wax in my strong hands till it became soft, which it soon did between the kneading and the rays of the sun-god son of Hyperion. Then I stopped the ears of all my men, and they bound me hands and feet to the mast as I stood upright on the cross piece; but they went on rowing themselves. When we had got within earshot of the land, and the ship was going at a good rate, the Sirens saw that we were getting in shore and began with their singing. "'Come here,' they sang, 'renowned Ulysses, honour to the Achaean name, and listen to our two voices. No one ever sailed past us without staying to hear the enchanting sweetness of our song - and he who listens will go on his way not only charmed, but wiser, for we know all the ills that the gods laid upon the Argives and Trojans before Troy, and can tell you everything that is going to happen over the whole world." They sang these words most musically, and as I longed to hear them further I made signs by frowning to my men that they should set me free; but they quickened their stroke, and Eurylochus and Perimedes bound me with still stronger bonds till we had got out of hearing of the Sirens' voices. Then my men took the wax from their ears and unbound me.
The Odyssey by Homer - Book XII - translation by Samuel Butler
Ulysses resisting the charm of the Sirens is a symbol of the right man who does not deviate from his principles. Maybe the mosaic decorated the study room of the owner of the house. Episodes of the Iliad and the Odyssey were often depicted in mosaics, e.g. at Villa del Casale in Sicily, but this one is not very common, although other examples can be seen in Algeria and near Rome.
The mosaic is rather small, so the artist had few tesserae (tiles) to portray his hero and the other personages and yet he managed to convey the tension of the moment in the worried looks on the faces of Ulysses and of his companions.
Homer speaks of two Sirens, but some Latin authors say they were three, a number which best suited the author of the mosaic. The man holding a gigantic lobster on the boat to the left was probably portrayed to give symmetry to the overall scene and place Ulysses at its centre. You may wish to see a XVIIth century painting at Palazzo Barberini in Rome depicting the same subject with some slight changes. 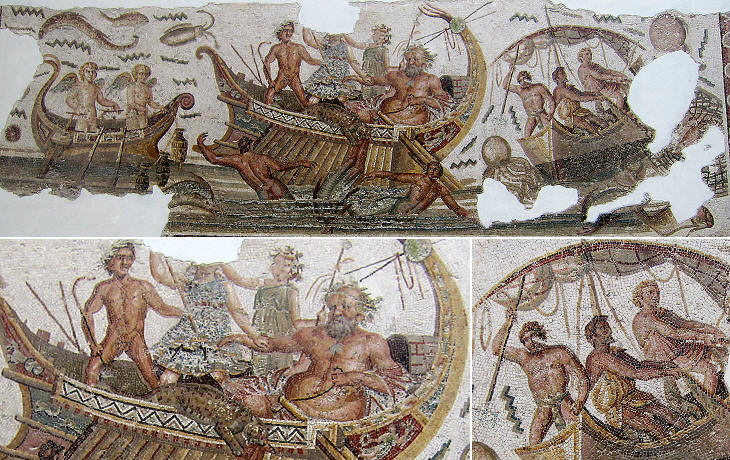 Dionysus, the Greek god of winemaking, who was associated with initiatory rites and frenzied lust was a recurring subject in the decoration of triclinia, the rooms where the Romans had their banquets. Very often the god was portrayed in a small medallion at the centre of a geometric pattern. His conventional iconography represented him driving a chariot drawn by two panthers (see mosaics in Algeria, Libya and Spain). This tradition was totally ignored by the author of this mosaic where Dionysus, the personage wearing a bluish tunic and holding a lance, and his seasick panther almost disappear in a complex marine scene which is centred around a fat Silenus who is at the helm.
The mosaic is based on an episode of Book III of the Metamorphoses by Ovid which is also depicted in a relief of the main bronze door of S. Pietro in Rome. 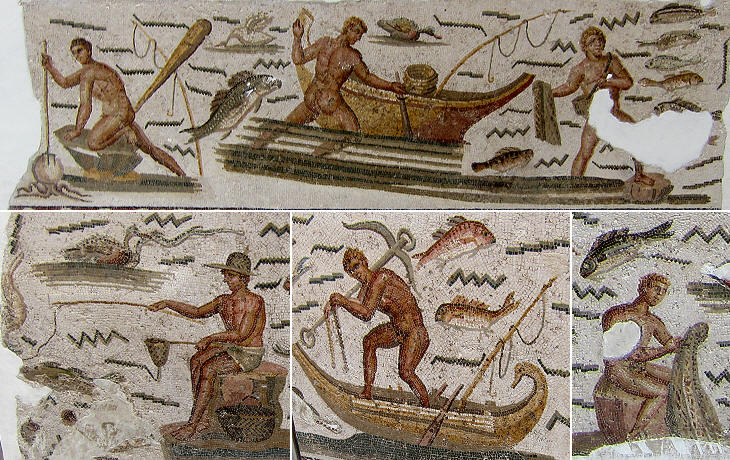 A third mosaic depicting fishermen at work was found in the House of Ulysses and Dionysus. It is a long strip with a double sequence of three scenes. The subject was a popular one and in many cases fishermen were putti (at Philippopolis) or boys (at Antioch), but apparently in Africa they had a preference for showing male adults (see mosaics found at Carthage, Hadrumetum and Leptis Magna). 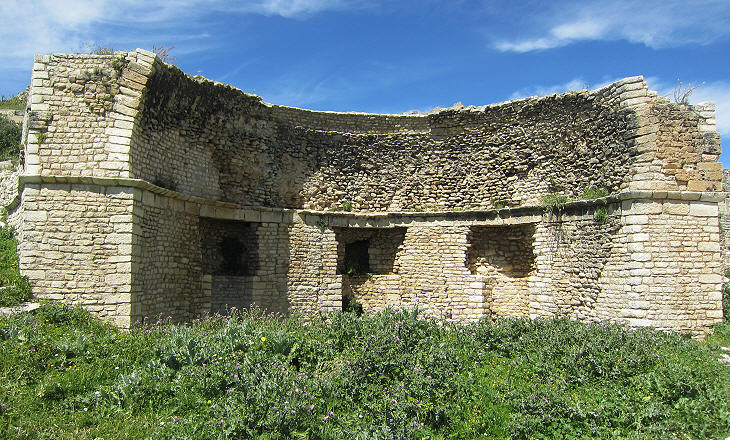 While the eastern and western ends of Thugga were clearly marked by arches and the northern limit by ancient walls, where exactly the town ended along the gentle slope to its south is uncertain.
The presence of a large fountain to the south of the House of Dionysus and Ulysses suggests that it continued where now the ground is covered by olive groves. 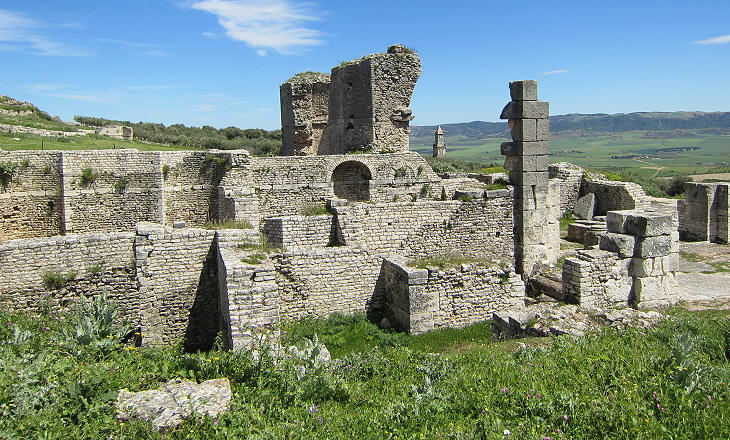 Excavations are still being carried out at the south-western end of the archaeological area to unearth the walls of large baths, which were presumably built at the time of Emperor Commodus when Aqua Commodiana, an aqueduct was completed (the cisterns it supplied are not far from the baths). The baths appear to have been the largest ones of Thugga with the halls aligned along a NS axis. 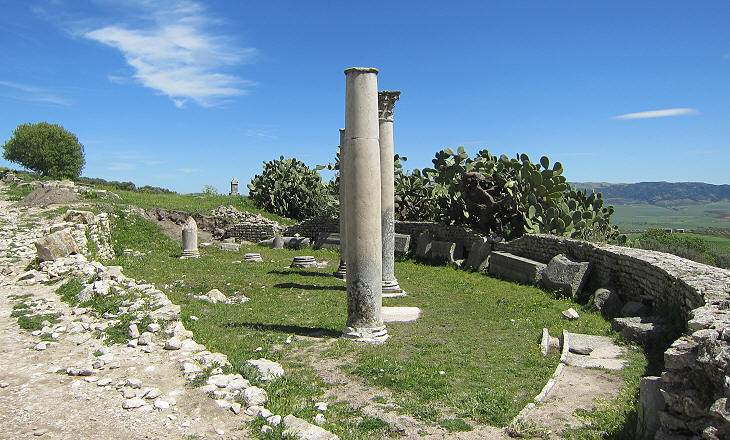 During the reign of Emperor Antoninus Pius imposing baths were built at Carthage. They had two very large latrines having the shape of a crescent; their design most likely influenced that of the latrines of these baths which were built only a few years later. 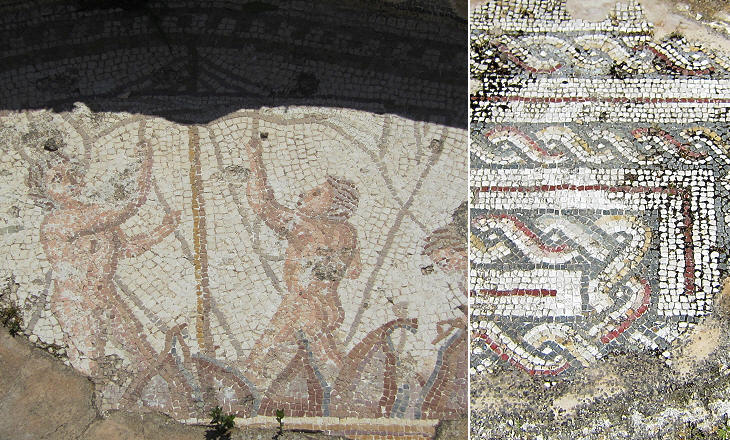 Mosaics in a house behind the Southern Baths

The area between the Southern Baths and the centre of the town is only partially excavated and is in an apparent state of abandonment. It was a residential area with some decorated houses. Maybe if archaeologists found some reliefs with phalli and the neighbourhood was dubbed as the "red-light district of Thugga", more attention would be paid to its preservation. 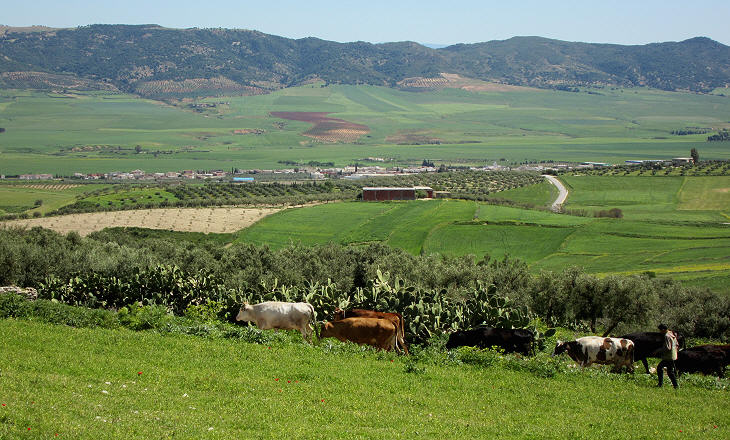 View of the countryside from the Southern Baths