View of modern Tiberias (and as it appeared at the beginning of the XXth century in the image used as background for this page). You may wish to see the town and its lake from Umm Qays in Jordan

Descending the mountain by a very steep rocky road we reached the foot of it and entered Tiberias at half past four. It is a small wretched city of which the houses, or rather hovels, are built of stones, for the most part heaped on one another without mortar. In the walls about eighteen feet high are visible the patches with which the Turks have repaired the breaches made by the French when they took the city in 1799.
William Turner - Journal of a Tour in the Levant - 1820. Turner made an excursion to Tiberias and its environs from Nazareth.
We are camped in this place, now, just within the city walls of Tiberias. We went into the town before nightfall and looked at its people - we cared nothing about its houses. Its people are best examined at a distance. They are particularly uncomely Jews, Arabs, and negroes.
Mark Twain - The Innocents Abroad - 1869. Twain reached Tiberias from Syria, after having visited Banias and Capernaum. 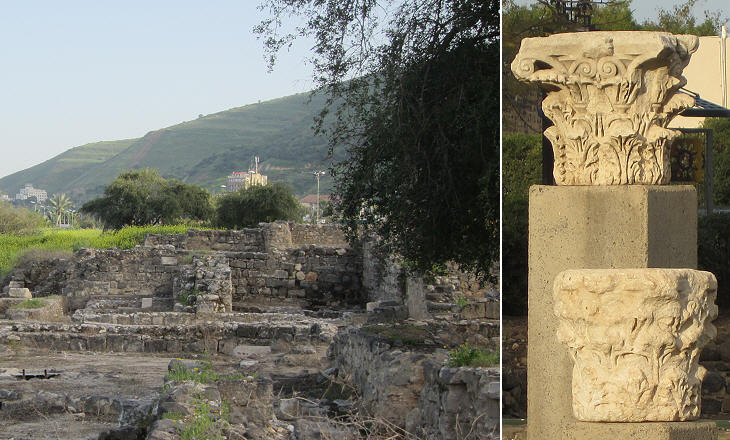 In the morning early we walked with the physician to a mineral bath half an hour south of the city along the sea shore. About a quarter of an hour from the walls we passed some remains of the wall of the ancient city of which also there are ruins close to the northern wall and there are marks of antiquity on the mountain to the west. W. Turner
From various authorities I have culled information concerning Tiberias. It was built by Herod Antipas, the murderer of John the Baptist, and named after the Emperor Tiberius. It is believed that it stands upon the site of what must have been, ages ago, a city of considerable architectural pretensions, judging by the fine porphyry (most likely granite) pillars that are scattered through Tiberias and down the lake shore southward. (..) This modern town - Tiberias - is only mentioned in the New Testament; never in the Old. M. Twain 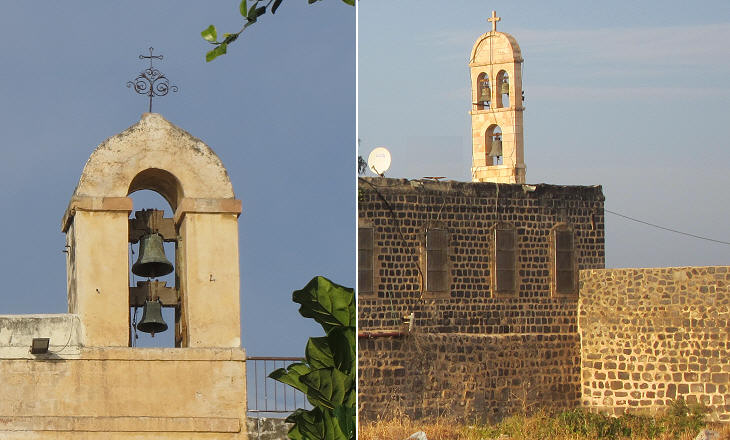 We rode immediately through narrow dirty dusty streets to the Catholick church belonging to the Catholick convent at Nazareth, but lent by them to the Greek Catholicks. It is a ruined building with bare unplastered walls said to have been the house inhabited by St. Peter. Micheli, our guide, went immediately for the keys to the Greek Catholick priest who sent with them two mattresses for us. (..) While the Frenchman and I were looking dolefully at each other commenting on the wretched accommodation which the church would afford us, there entered a Neapolitan physician Signor Adam who has been summoned here from Acre where he resides in the service of the Pasha to attend the wife of a rich Jew. He very civilly led us to the house of a Jew where he lodged, in which we were tolerably comfortable and supped on fish from the neighbouring sea. W. Turner 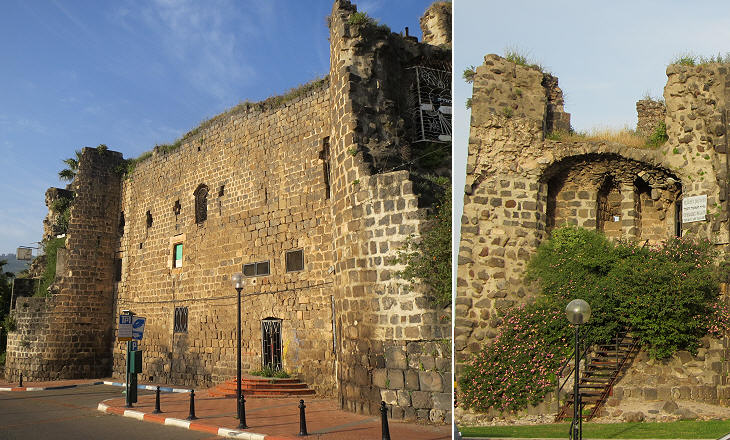 Palace of the Crusaders, actually an XVIIIth century fortress built on the site of a previous one

In the XIIth century Tiberias was the capital of a county of the Kingdom of Jerusalem. In 1187 Saladin, Sultan of Egypt and Syria, laid siege to Tiberias, in response to Crusader attacks to Muslim caravans en route to Damascus. The King of Jerusalem marched on Tiberias with a large army and the support of the Knights Templars and Hospitallers, two military orders. They arrived near Tiberias at the beginning of July when the heat was extreme (Tiberias is 200m/650 ft below sea level). Saladin prevented them from accessing water wells and in the battle which was fought at Hattin, a few miles northwest of Tiberias, he defeated the tired and thirsty Christian army. The king and the chief knights managed to reach Tiberias, but on the following day they surrendered. Eventually Saladin conquered the main towns of the Kingdom of Jerusalem including its capital. 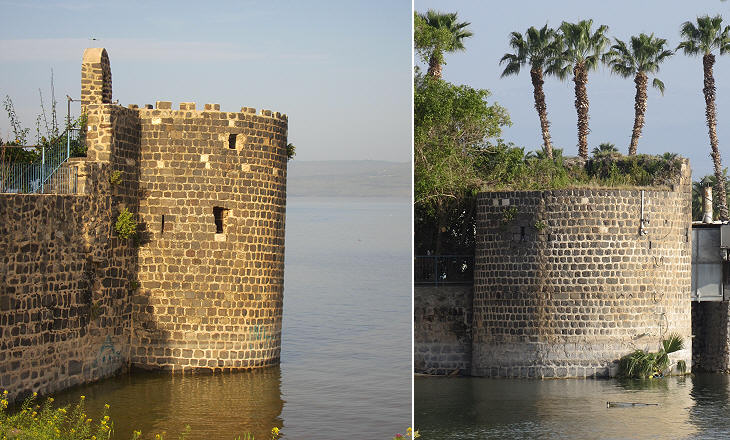 Turner was not much interested in the Crusader period, unless King Richard I the Lionheart was involved. Twain instead described the battle: We came at last to the battle-field of Hattin. It is a grand, irregular plateau, and looks as if it might have been created for a battle-field. Here the peerless Saladin met the Christian host some seven hundred years ago, and broke their power in Palestine for all time to come. Both armies prepared for war. Under the weak King of Jerusalem was the very flower of the Christian chivalry. He foolishly compelled them to undergo a long, exhausting march, in the scorching sun, and then, without water or other refreshment, ordered them to encamp in this open plain. The splendidly mounted masses of Moslem soldiers swept round the north end of Genessaret, burning and destroying as they came, and pitched their camp in front of the opposing lines. At dawn the terrific fight began. Surrounded on all sides by the Sultan's swarming battalions, the Christian Knights fought on without a hope for their lives. They fought with desperate valor, but to no purpose; the odds of heat and numbers, and consuming thirst, were too great against them. (..) Sunset found Saladin Lord of Palestine, the Christian chivalry strewn in heaps upon the field, and the King of Jerusalem and the Grand Master of the Templars captives in the Sultan's tent. 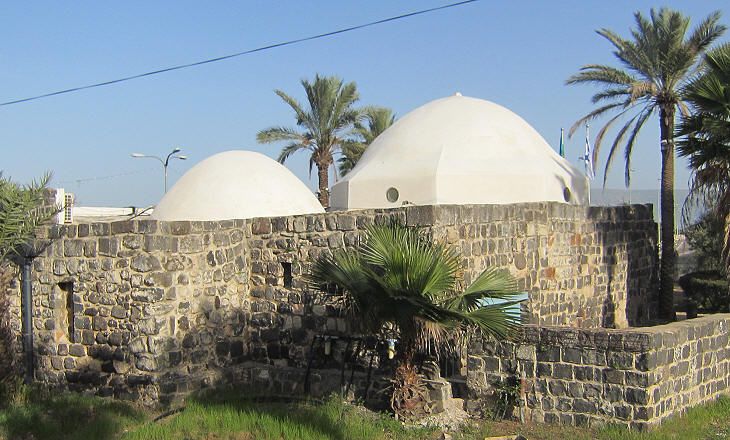 The baths formed from six natural springs of boiling heat are inclosed in a mean Turkish building and resorted to by those afflicted with scorbutick disorders very common here and with leprosy. W. Turner
We did not go to the ancient warm baths two miles below Tiberias. I had no desire in the world to go there. This seemed a little strange, and prompted me to try to discover what the cause of this unreasonable indifference was. It turned out to be simply because Pliny mentions them. I have conceived a sort of unwarrantable unfriendliness toward Pliny and St. Paul, because it seems as if I can never ferret out a place that I can have to myself. It always and eternally transpires that St. Paul has been to that place, and Pliny has "mentioned" it. M. Twain
Twain had in mind what Pliny the Elder wrote in Historia Naturalis - Book V: Iordanes (..) in lacum se fundit, quem plures Genesarem vocant, (..) amoenis circumsaeptum oppidis, ab oriente Iuliade et Hippo, a meridie Tarichea, quo nomine aliqui et lacum appellant, ab occidente Tiberiade, aquis calidis salubri. (The River Jordan empties into the lake which most call Genesarem which is surrounded by nice towns: Iuliade and Hippo to the east, Tarichea which gives its name to the lake to the south and Tiberias with its healthy hot springs to the west).
Today the springs are still utilized in modern facilities by the lake; the old hammam houses a small museum about the positive effects of hot baths. An ancient synagogue with interesting mosaics has been excavated very near the hammam. 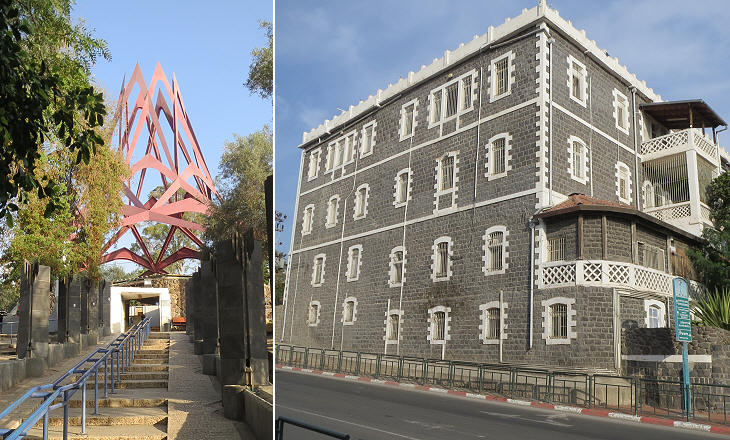 (left) Modern Monument at the Tomb of Maimonides, a Jewish philosopher (1135-1204); (right) Meyouhas Hostel, one of the first modern buildings of Tiberias (1896)

The Sanhedrim met here last, and for three hundred years Tiberias was the metropolis of the Jews in Palestine. It is one of the four holy cities of the Israelites, and is to them what Mecca is to the Mohammedan and Jerusalem to the Christian. It has been the abiding place of many learned and famous Jewish rabbis. They lie buried here, and near them lie also twenty-five thousand of their faith who traveled far to be near them while they lived and lie with them when they died. The great Rabbi Ben Israel spent three years here in the early part of the third century. He is dead, now. M. Twain
Initially the Jews refused to live at Tiberias because the town stood on a former cemetery, but in the IInd century it became a centre of Jewish religious studies and it continued to attract rabbis until it was conquered by the Crusaders. In 1247 Tiberias was seized and razed to the ground by Mameluke Sultan Baibars and for many of the following centuries it was just a small village. 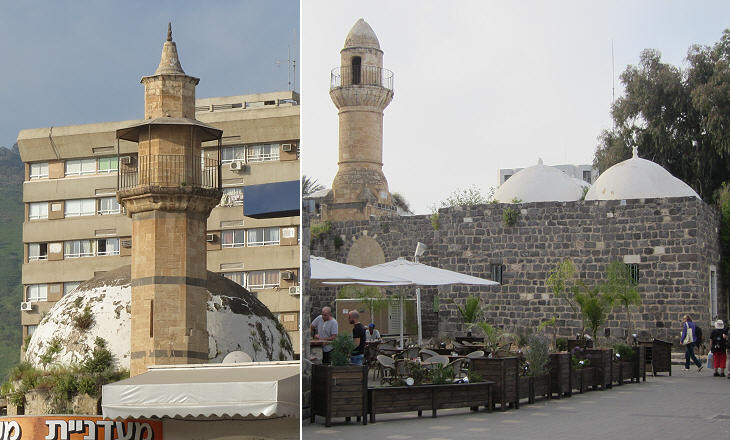 In the XVIIIth century Tiberias became the capital of a semi-autonomous territory ruled by Daher el-Omar, the son of a tax collector who expanded his father's activity to become a local chief. In 1743 the Ottoman governor of Damascus briefly sieged Tiberias, but altogether the authority of Daher el-Omar was tolerated as he paid the due portion of tax to the central government. He gradually expanded his authority over Nazareth and Acre and he founded Kaifah, today's Haifa.