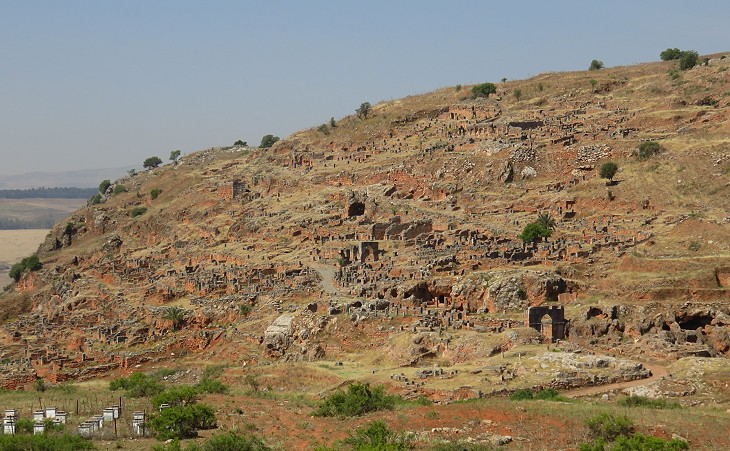 View of the town

A very interesting excursion, which, however, must be made on horseback, is to the ruins of El-Kheneg erroneously called by the Arabs Old Constantine, in reality the ancient Roman Respublica Tidditanorum. It is situated about 23 kil. N.W. of Constantine, on the same river which flows past the capital, and the general character of the ground on which the two cities are situated is very similar. There are very well preserved remains of a Roman road, a Roman citadel restored by the Byzantines, many other ruins of the same character, and numerous dolmens.
John Murray - Handbook for Travellers in Algeria and Tunis - 1895 (written by R. L. Playfair) 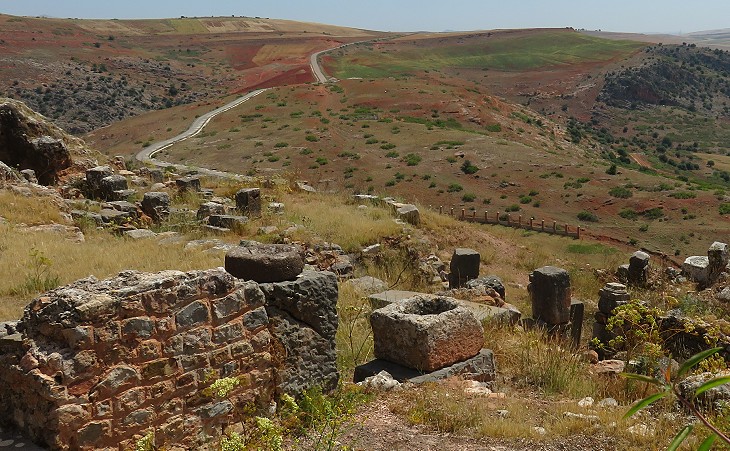 Latin castellum meant a small castrum (fortified camp) situated on a hill and it stated the military purpose of this small town which stood on a rock with a commanding view. Because of its easily defensible position the site was populated well before the Roman conquest of Numidia in 46 BC. 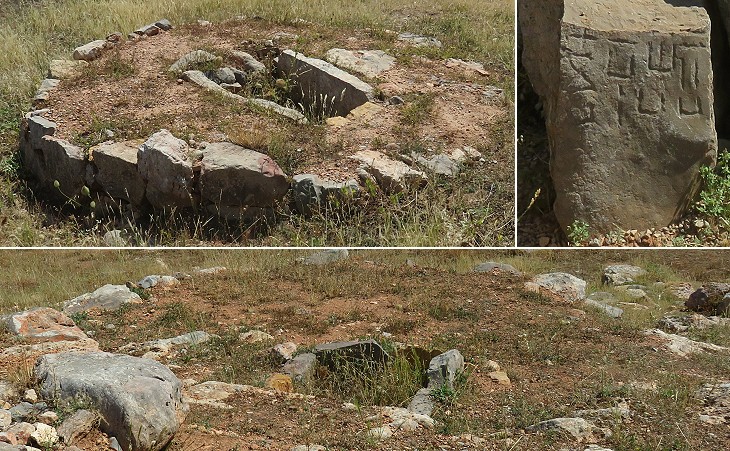 "Bazinas" and Punic inscription outside the city gate

The Carthaginians founded a number of towns along the coast and only a few inland, e.g. Cirta (Constantine). Although the first inhabitants of Castellum Tidditanorum might not have been Carthaginians they adopted the Punic alphabet and some of the deities who were worshipped at Carthage. The oldest tombs of a small necropolis outside the city gate are circular bazinas, typical Numidian tombs, in the middle of which one or two coffers were placed. A sort of very large Christian bazina can be seen at Tipasa. 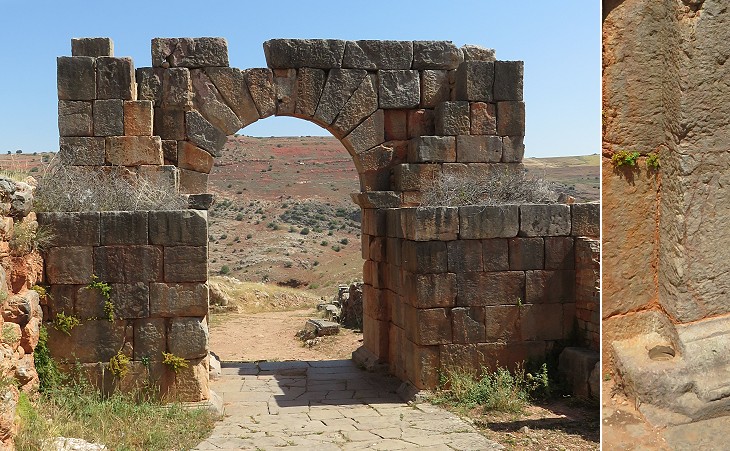 Similar to a medieval castle, Castellum Tidditanorum had only one major entrance and also its urban layout was similar to that of a small medieval fortified town, both because of the morphology of the ground and of military reasons. Notwithstanding these constraints its citizens did their best to turn the old village into a proper Roman town. 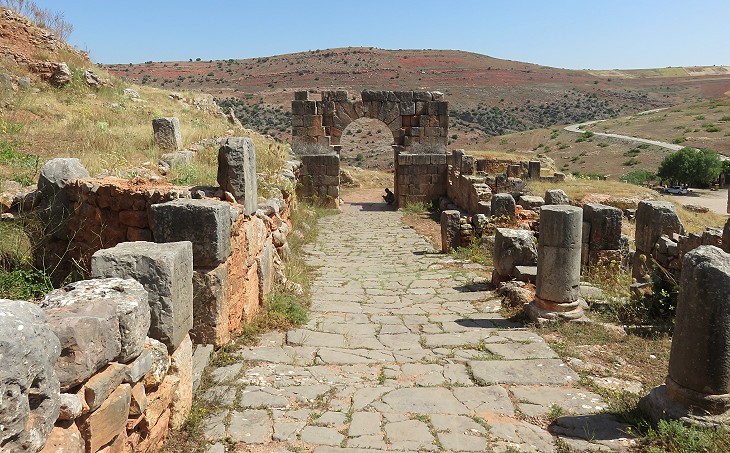 The urban layout does not have the regular features of Roman towns in Algeria which were built from scratch, e.g. Thamugadi, but the main street of Castellum Tidditanorum can be rightly called Cardo Maximus, because it is the largest street crossing the town from north to south. 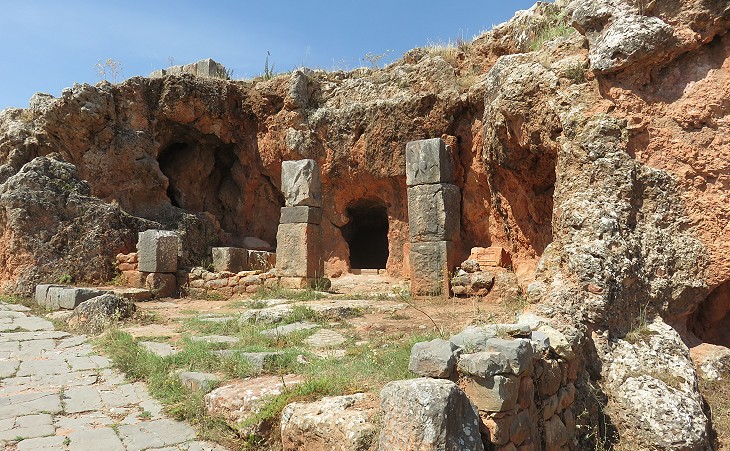 Archaeologists have identified two monuments along the first section of Cardo Maximus which do not belong to the initial period of the Roman town. The first one is a mithraeum, a usually narrow hall where worshippers of Mithra gathered for their ceremonies. It is unlikely however that the mithraeum had the current aspect which makes it very noticeable from the main street. The nine mithraea which have been identified at Ostia are all in a secluded location. The cult of Mithra was reserved to initiates who did not seek visibility. 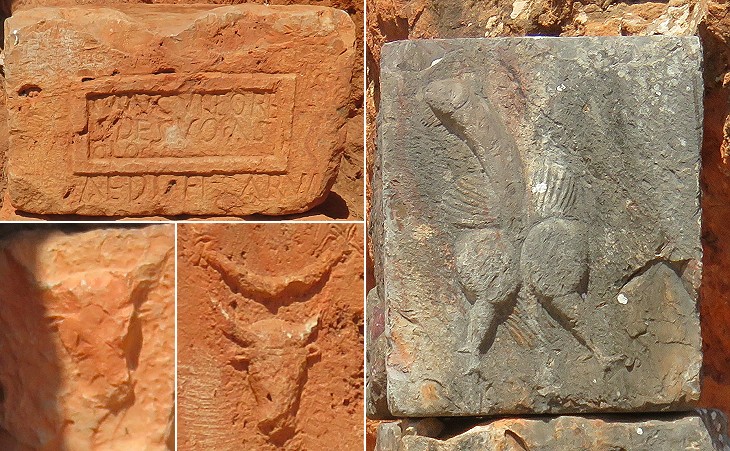 (left) Reliefs supporting the opinion that the site was a "mithraeum": inscription "I(nvicto) M(ithrae) Cultores de suo a solo (a)edifi(c)arun(t)" and heads of bulls; (right) a "fascinus", a phallic symbol placed on a cock (see a similar one at Tyre in Lebanon)

Very often archaeologists found more decisive evidence of the cult of Mithra than that provided by the reliefs at Castellum Tidditanorum, e.g. a statue of Mithra slaying the Bull (Tarquinia) or a design of the prayer hall with two opposite benches (Capua). A cock holding a fascinus is a symbol of the new day and it could be a reference to Mithra who was often portrayed with the chariot of the Sun (S. Prisca in Rome). It was a popular amulet especially with the Roman soldiers who worshipped Sol Invictus, another belief which was very popular in the IIIrd century AD at the same time as Mithraism. 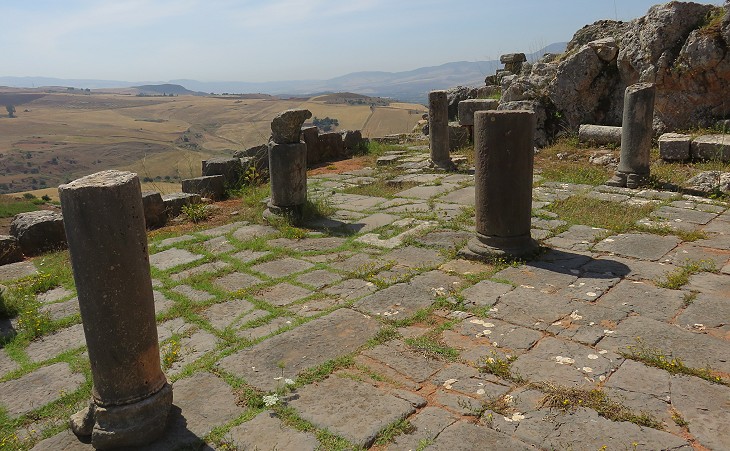 Small Christian basilica opposite the Mithraeum

At the end of the Vth century the town is known to have been the seat of a bishopric. A small Christian basilica has been identified opposite the mithraeum; it might have been an existing building which was adapted to be used as a church. 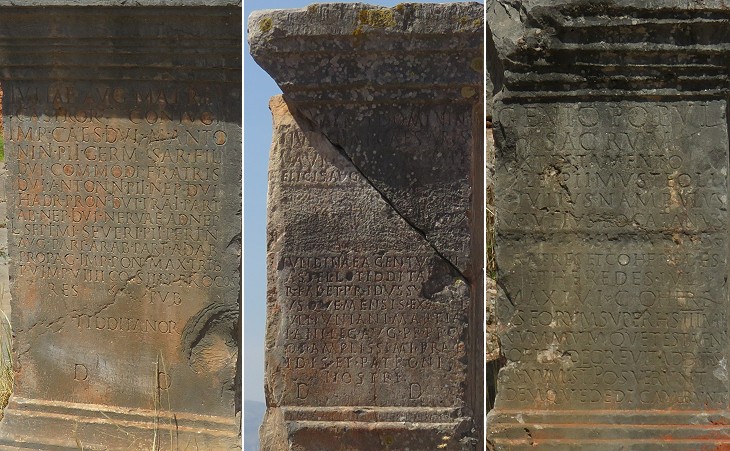 Inscriptions along Cardo Maximus: (left) base of a statue to Julia Domna, wife of Emperor Septimius Severus; (centre) inscription of the time of Emperor Alexander Severus (whose name was erased as at Cuicul) stating the institution of "nundinae", market days, on the day before the kalends (the first day of every month) and on the day before the ides (the 13th or the 15th day of every month); (right) base of a statue to a local citizen who left a bequest of 4,000 nummi to the temple of "Genio Populi", similar to that at Thamugadi

The general opinion was that the ruins of El-Kheneg were those of ancient Cirta. In 1852 I visited the site at the head of a group of sappers. They soon found a number of inscriptions. (..) I was not too happy because they did not help solve the question about the name of the town, when I came across to the upper end of an inscription buried in the ground. My sappers began to excavate frantically and soon the dedication "Iuliae Aug Matri" became visible. Hopefully when the whole inscription was cleared I had the name I was looking for "RES PVB(lica) TIDDITANOR(um)". Free translation from Annuaire de la Société archéologique de la province de Constantine - 1853
An inscription establishing nundinae contained another reference to Castellum Tidditanorum.
Among the names quoted in the bequest to the temple is that of Rogatianus, which occurs also in the inscription celebrating the construction of a library at Thamugadi. The systematic recording of all Latin inscriptions (Corpus Inscriptionum Latinarum - CIL) was initiated in 1853 by the Berlin-Brandenburg Academy of Sciences and Humanities and it has proved of invaluable usefulness to archaeologists, historians and the curious traveller. 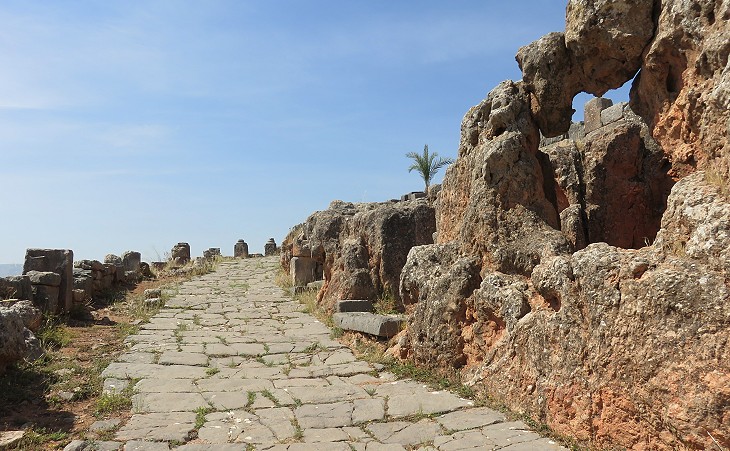 The Romans were very keen on straight roads. At the peak of their military power and economic wealth they did not hesitate to undertake expensive works to eliminate bent or steep sections, e.g. at Pisco Montano along Via Appia, but at tiny Castellum Tidditanorum, municipal authorities had to live with a large bend in their Cardo Maximus, so that it could reach the upper part of the town. 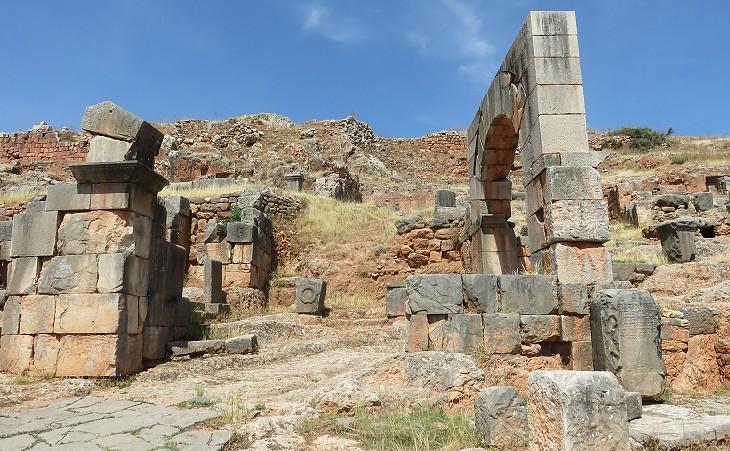 Arches at the turn of Cardo Maximus towards the upper town

The intersection between Cardo Maximus and Decumanus Maximus (the east-west main street) was the central point of a Roman town and it usually housed its Forum. Castellum Tidditanorum did not have a proper Decumanus Maximus, but only a series of steps which crossed Cardo Maximus and led to the top of the hill. Municipal authorities marked this central point by erecting two arches. 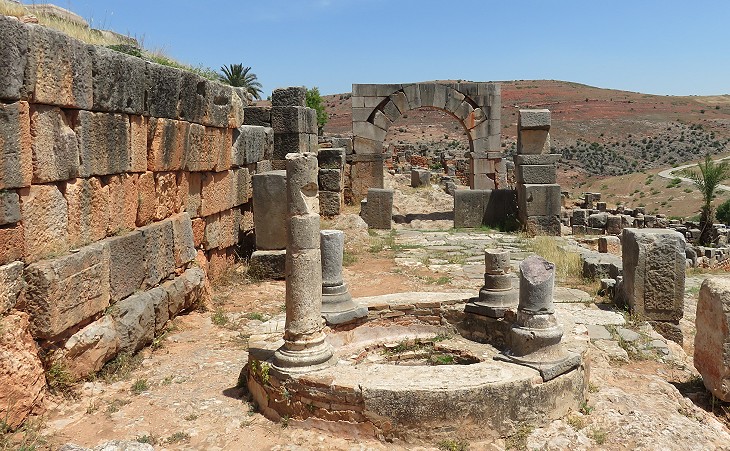 Baptistery near the arches

In many Roman towns in Algeria, e.g. at Tipasa and Cuicul, archaeologists identified a large Christian neighbourhood in a peripheral location. At Castellum Tidditanorum this has not occurred yet. The only other evidence of the Christian period of the town in addition to the basilica opposite the Mithraeum is a baptismal font, but not a baptistery. The sacrament was administered by immersion and the font was covered by a canopy, a feature which occurs in other towns of the region, e.g. at Sufetula. 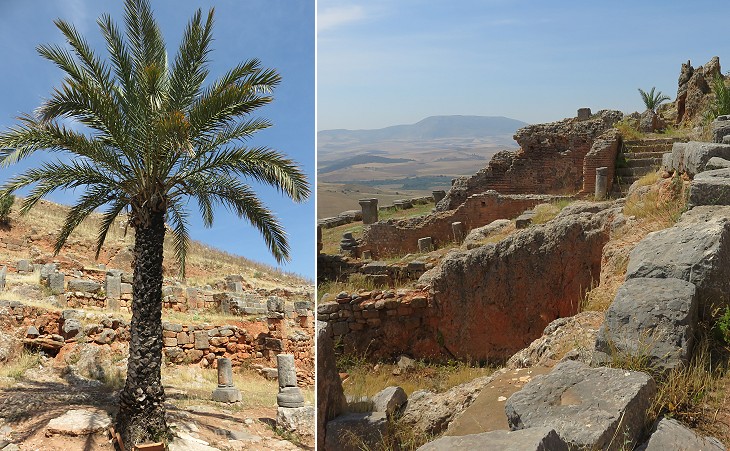 En route to the upper town above the small forum

Visits to archaeological sites are often an enduring experience, because of heat or rain or because the location is too crowded. A sunny day with a fine breeze made my visit to Castellum Tidditanorum very enjoyable. Not many tourists visit the Roman monuments of Algeria and less so this small town. There were no national visitors either because of the Holy Month of Ramadan. The site was all for me and my fellows. 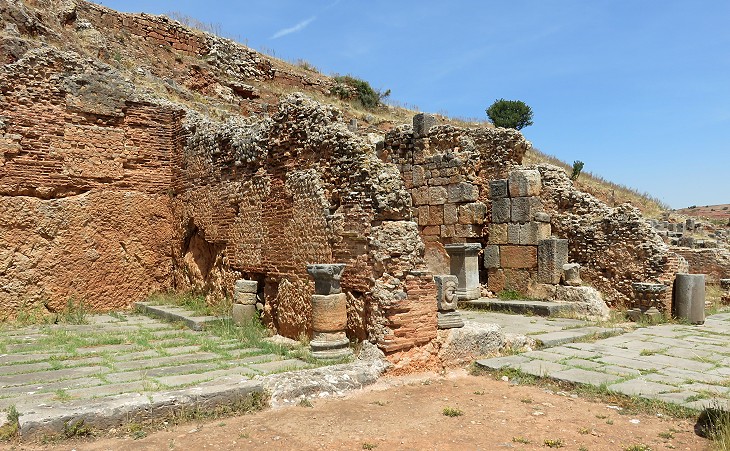 The hill was excavated in order to obtain a small terrace with three halls, one of which most likely housed the tribunal of the town. A number of inscriptions, not necessarily found on the spot, provide information on some monuments or historical events of the town. The relief of a bearded man which can be seen in the image used as background for this page could represent Saturn, to whom a temple was dedicated at the very top of the hill. The god was the local Romanized version of Baal, the main Phoenician/Carthaginian deity. A very large number of simple stelae portrayed Saturn as a bearded man (see those found at Thamugadi in the introductory page). 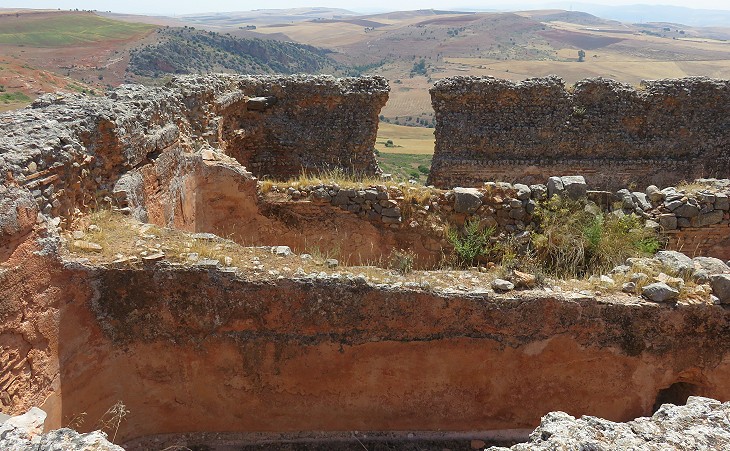 Great cisterns near the top of the hill

The small size of the town and its isolated commanding location did not warrant the construction of an aqueduct. As no springs were available on the hill and the river in the valley was more than a mile away, cisterns, public and private, were built throughout the town in order to collect rainwater. The largest ones supplied a bath establishment and the adjoining neighbourhood. 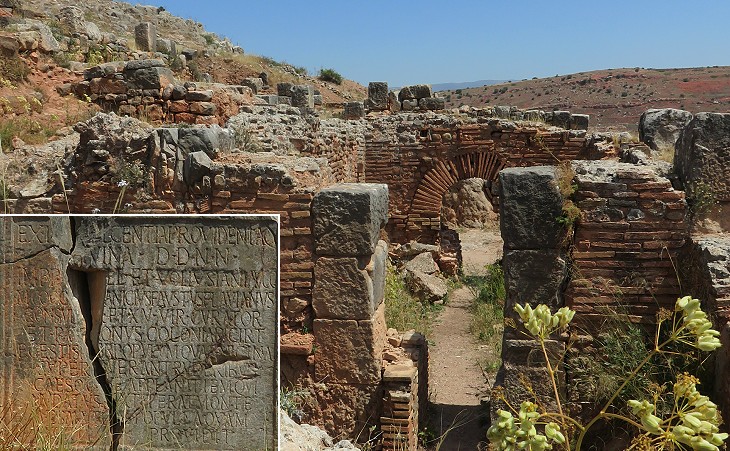 Baths below the great cisterns; (inset) inscription celebrating their construction

The completion of the great cisterns and of the baths occurred in 251 and it was celebrated by an inscription in which the difficulties of the undertaking were spellt out (.. caesoque ad planitiem qui nudatus extiterat monte - the existing mountain was flattened) in a wording which brings to mind that celebrating the construction of Colonna Traiana in Rome.
The inhabitants of Castellum Tidditanorum had a choice between two bath establishments, but both options required good legs; they could either climb the whole hill to reach the small baths at its top or go to the lower town to larger baths which perhaps were supplied by a spring. 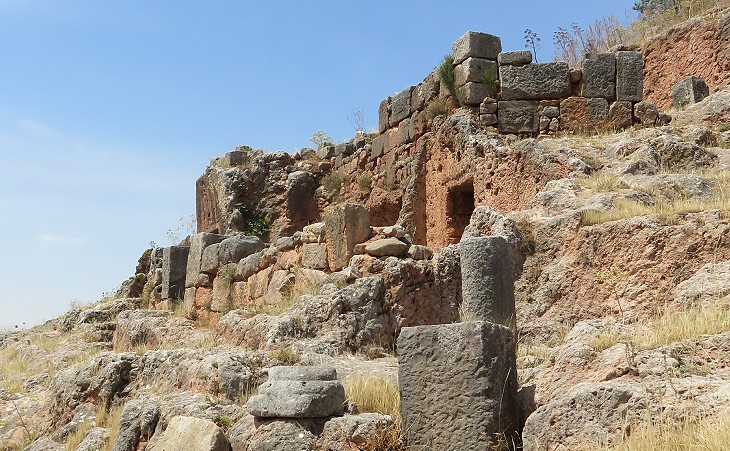 Byzantine fortifications at the top of the hill

Very few inscriptions shed light on the history of Castellum Tidditanorum after the end of the IVth century. The region was conquered by the Vandals in the 430s and a century later by the Byzantines. The latter distinguished themselves by tearing down the ancient temples and monuments to use their stones to build very small fortifications, e.g. at Musti and Thignica, which eventually proved to be of no avail when the Arabs launched their conquest campaigns at the end of the VIIth century. 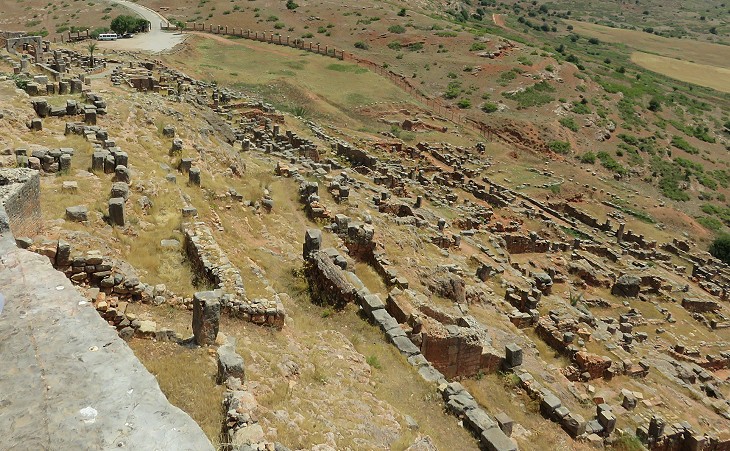 Overall view of the lower town

In the lower town archaeologists found evidence of some spatious houses, of many domestic cisterns and of an olive press in addition to baths, the furnaces of which were eventually turned into pottery kilns. The slope of the hill was carefully terraced in a very effective way because there is no evidence of landslides. 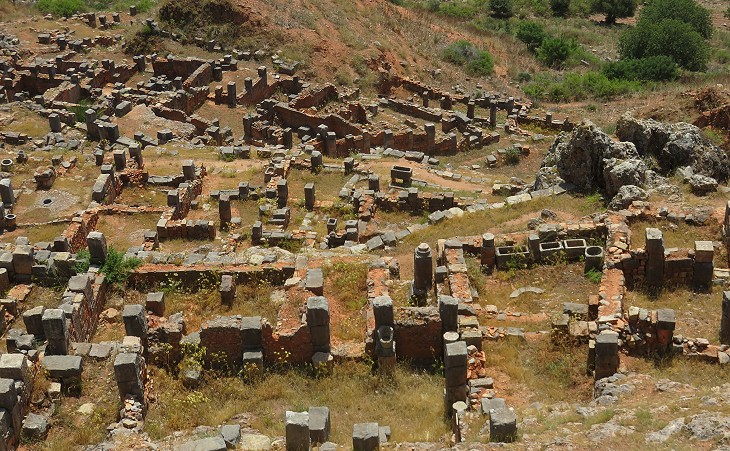 Residential neighbourhood in the lower town