Grand Place with the symbols of the guilds; it was almost entirely rebuilt after the 1940 bombings

Tournay is the capital of a small territory, called the Tournesais and a bishop's see subject to the archbishop of Cambray. The cathedral church of our Lady is an old Gothic building, built by Chilperic king of France, with four steeples, and adorned with many beautiful chapels and magnificent tombs, both in marble and brass, and some excellent paintings. (..) There is a large number of religious houses for men and women as in the other cities of Flanders. They reckon seventy trades with their deacons in this city, who are under the direction of the magistrates. Their trade at present lies chiefly in the linen manufacture, but formerly they dealt considerably in the woollen way.
Thomas Nugent - The Grand Tour - 1749
At Nugent's time Tournai was part of the Austrian Netherlands. 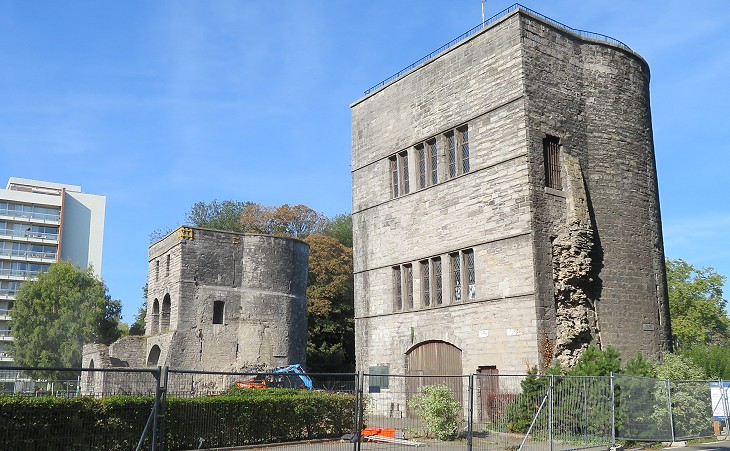 Tournay is a fortified town on the Schelde, whose banks are faced with masonry, so as to contract the river into a navigable channel and form at the same time handsome quays on each side. (..) It was considered one of the strongest fortresses on the outer line nearest to France, and endured many sieges from English, French, and Spaniards.
John Murray III - Hand-book for Travellers on the Continent - 1858
At Murray's time Tournai was part of the Kingdom of Belgium which was created in 1830; today it is the westernmost territory of Wallonia, a French-speaking region which is one of the components of the Federal State of the Kingdom of Belgium.
The central arch of the Pont des Trous was blown up by retreating British forces in May 1940. It was reconstructed after the war, but the design of its Gothic arches was modified to allow the passage of larger boats. In 2018 it was dismantled in order to further facilitate the passage of boats. It will be given a "medieval aspect" again, according to the promises of local authorities. The towers were less affected by war events and modern restructuring. 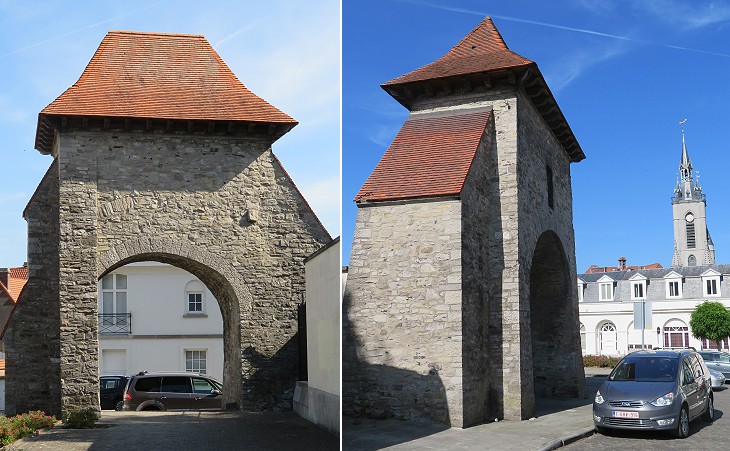 Tournai is not mentioned by Caesar in his account of the Gallic Wars, nor by Pliny and Strabo. We know its Roman name Turnacum because it shows up in descriptions and maps of roads during the Late Empire. The town was situated along a road which linked Bagacum Nerviorum (Bavay) with Gesoriacum (Boulogne-sur-Mer), the main port for Britain. A letter by St. Jerome says that it was raided by the Vandals in 407. 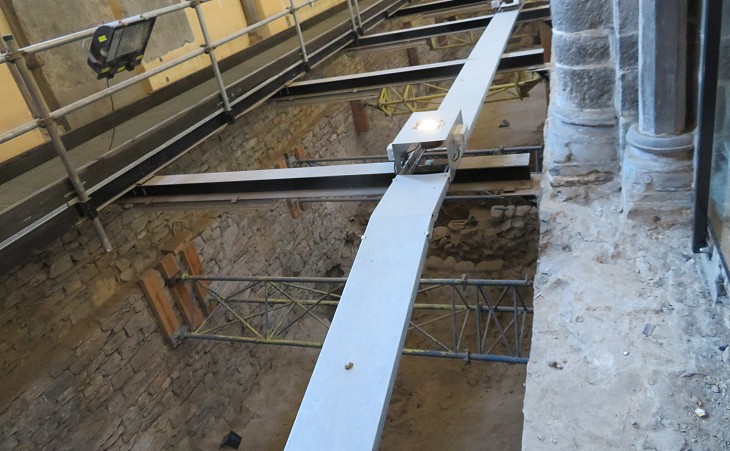 Excavations in the left aisle of the Cathedral

The Roman past of Tournai came to light in a series of excavations which were carried out after WWII in the area surrounding the Cathedral and in the building itself. In 2010 managers in charge of the restoration of the Cathedral announced that they had found traces of Roman buildings and of an early Christian church. The excavations focussed on the nave and in 2019 they were continuing in the aisles. 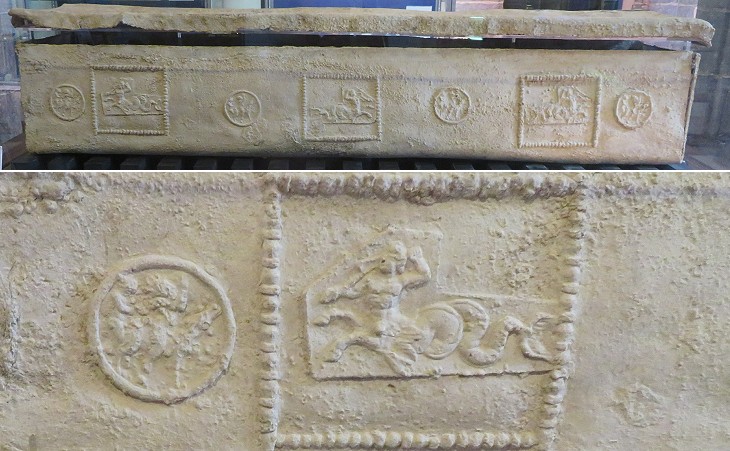 This fine lead coffin was found in 1989 in Rue Perdue, outside medieval walls which might have followed the layout of Roman ones. It is perhaps the most interesting Roman exhibit of a small archaeological museum. A finely decorated lead cinerary urn was found at Bavay and lead coffins at Tongeren and in Britain, e.g. at Cirencester and St. Albans. 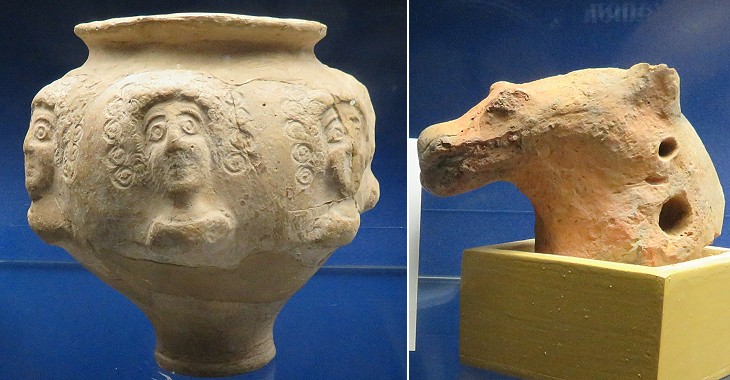 The economic development of Turnacum was linked to its position on the Schelde which was navigable from the town to its mouth in the North Sea. In particular it was important for the trade between Gaul and Britain, which acquired importance even before the Roman conquest of the island in 43 AD. 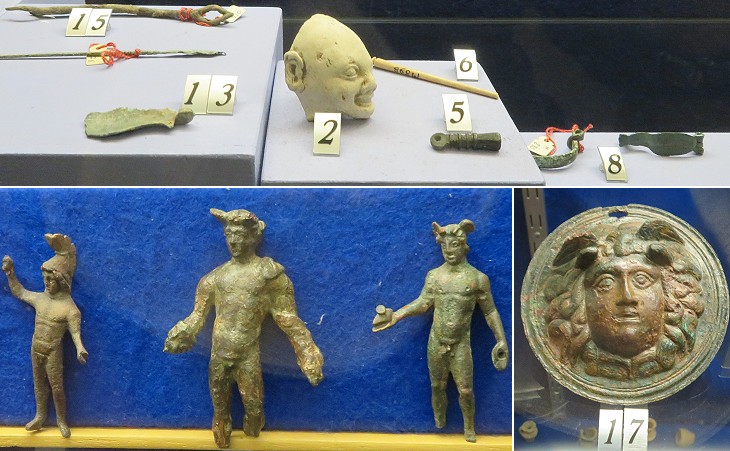 The small objects were found in a necropolis adjoining a Roman villa along the road to Bavay; they included the head of a laughing boy aka Risus (Laugh in Latin), a subject which has been found in many parts of Gaul and was perhaps linked to a local cult. The bronze objects show the degree of Romanisation of the region and are similar to those of the Treasure of Bavay, but the frequent depiction of Mercury is of local origin, because it was already noted by Caesar. 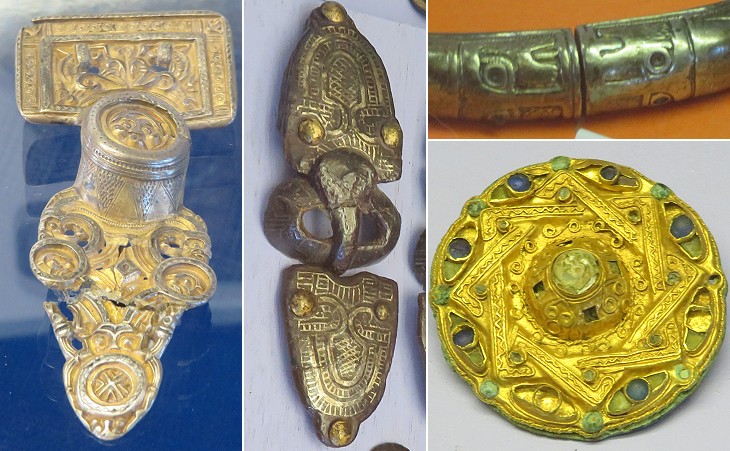 The Merovingians are a dynasty of King of the Franks who are named after a mythical ancestor. Childeric, the first king who is historically known, was the ruler of a small territory around Tournai in the Vth century. He was most likely an ally of Roman general Flavius Aetius in driving Attila out of Gaul. His tomb was found by chance at Tournai in 1635; the precious objects and jewels were eventually presented to King Louis XIV. In 1831 the treasure was stolen from the National Library of Paris and melted. In 1985 excavations near the site of the tomb of Childeric unearthed that of an aristocratic woman. Clovis I, son of Childeric, united all the Frankish states under his rule and he is regarded as the first King of the Franks. He made Paris the capital of the kingdom. 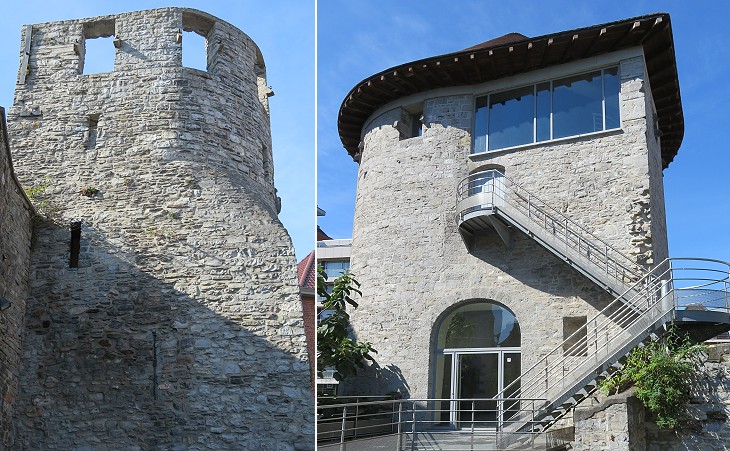 The history of Tournai is characterized by a neverending series of sieges; the town had several lines of fortifications and a state-of-the-art citadel which was built in 1667-1674 by King Louis XIV and was totally dismantled in 1780. The walls of the XIIth century most likely followed the layout of the late IIIrd century Roman walls. Rue du Cygne (Street of the Swan) owes its name to Latin cingulum which means belt, but could also indicate the elliptical shape of the walls, as at Cingoli. Cingulum was corrupted into cingle and eventually into cygne. 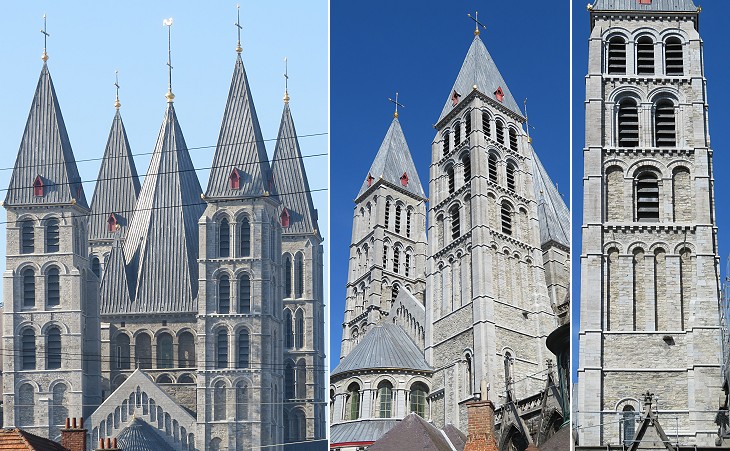 The most interesting edifice is the Cathedral, conspicuous from all sides with its five towers: it is exceedingly fine especially in its interior. Murray
The vast cathedral of Tournai, with its five towers, its Romanesque nave and transept, and its 14th century choir, a very lantern of glazed stonework, is one of the most striking in Europe. It lies outside the limits of Germany proper; but its apsidal transepts with their flanking towers attach it to the style of the great Rhenish churches, and if the Romanesque choir were, as no doubt it was, apsidal too, the plan would have been like that of the three trilobate churches of Cologne.
Thomas Graham Jackson - Byzantine and Romanesque Architecture - 1913
The Cathedral of Tournai is especially distinguished by a Romanesque nave of extraordinary dimensions, a wealth of sculpture on its capitals and a transept topped by five towers that foreshadow the Gothic style.
From the UNESCO brief description which supported the inclusion of the Cathedral in the World Heritage List in 2000. 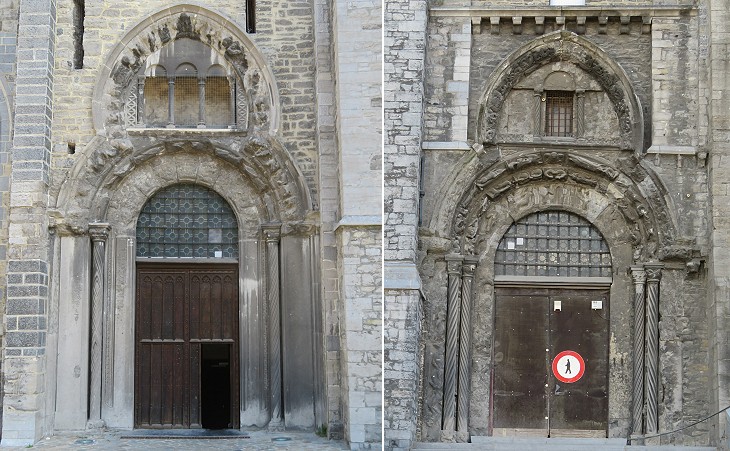 The existing edifice is in great part Romanesque. The W front has been disfigured by alterations. (..) The cathedral is entered by 2 doors, one on the N. side of the nave, the other on the S., adjoining the transept. The N. door is of the transition period. It consists of a semicircular archway beneath a pointed trefoil arch, the whole profusely adorned with ranges of sculptured figures, animals, and foliage. (..) At the French revolution this church was not only stripped of its revenues, but pillaged and defaced; its sculpture broken, and its painted glass for the most part demolished. Murray

Porte Mantile: details: (above) depiction of a fight, perhaps between Childeric and another Frankish chieftain, or scenes related to Judith and Holofernes; (below) capitals

The Romanesque Cathedral was built after fire destroyed the episcopal ensemble in the mid 9th century. The great 11th century basilica, part of which still remains, owes its construction to the growing importance of the Marian cult, which attracted many pilgrims in the wake of the plague of 1089 (Notre-Dame des Malades, "Our Lady of the Sick," otherwise known as Notre-Dame de Tournai). Another factor was the wealth of Flanders and of Tournai, its religious centre and a renowned centre of learning, in a region that produced wool and exported local limestone. In 1146 the city was granted its own bishop instead of being attached to the archdiocese of Noyon, as it had been since the early 7th century. UNESCO 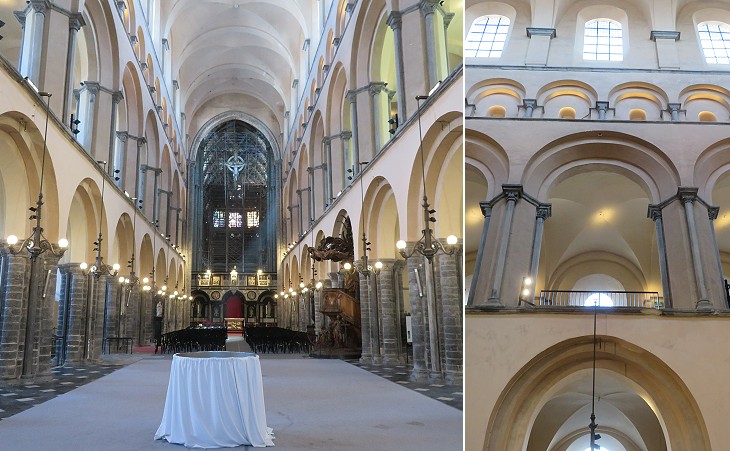 The nave has an aisle on each side, separated by piers and small columns, bearing semicircular arches, which in various parts approach the horse-shoe form. Above these is a second range of piers and arches, of similar or greater height than the first, forming the front of a large gallery, extending the width of the aisles. Over these is a series of arches against the wall, springing from short piers. Murray
The nave on the other hand has more affinity with the churches of Normandy, so that Tournai serves as a link between the Romanesque styles of northern France and Germany. The nave was dedicated in 1066, but some of the details are hardly consistent with so early a date. It has the large open-arched triforium of the Norman churches, here quite as large as the arcade below. Both of these storeys are vaulted, and above them is a real triforium under the aisle roof with small plain openings under a colonnaded arcade towards the nave. The nave piers have half-columns on all four sides. Jackson 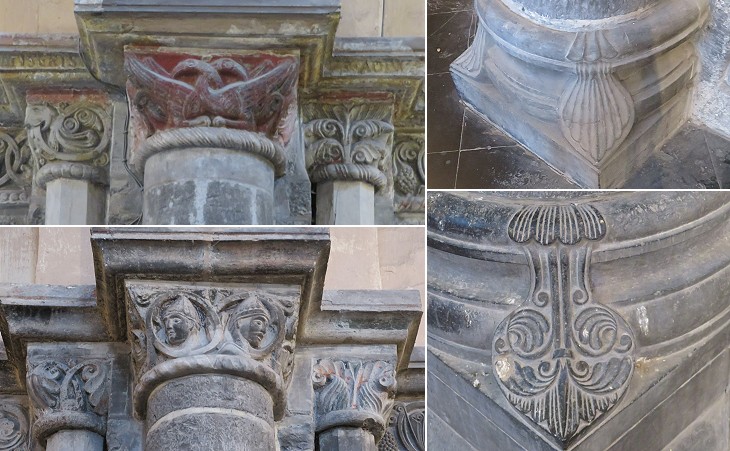 The capitals are richly carved, those in the lower arcade of a convex form, with interlacing foliage, grotesque animals, knots and twists of various kinds, much elaborated and highly finished. Those of the upper galleries have the concave outline and angle volutes of a more advanced kind than one would expect from so early a date. Jackson
The capitals and plinths were carved in a local black stone which was already quarried by the Romans. It was used also for the epitaph of Pope Adrian I at S. Pietro which was dictated by Charlemagne. The image used as background for this page shows another capital. 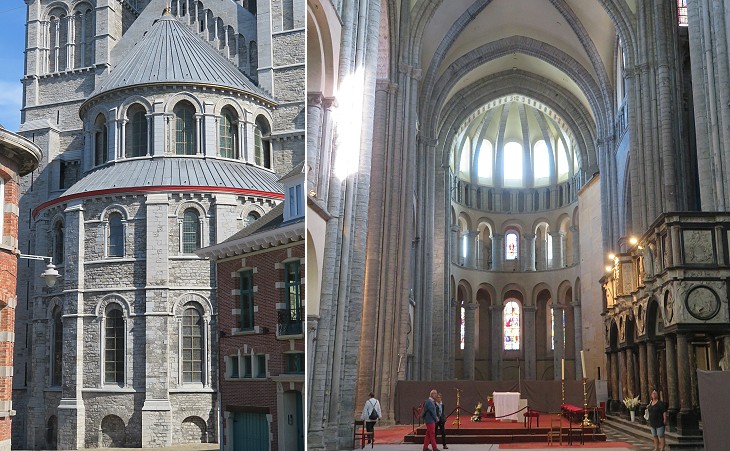 Cathedral: Romanesque apse of the transept

The apsidal transepts are later than the nave and were built about 1146. They have a diameter of 32 ft. and are surrounded by ambulatory aisles parted from them by cylindrical columns carrying round arches of two orders. The semi-dome is supported by converging ribs from the piers between the windows. These transepts are as fine as anything I know in Romanesque architecture. Jackson 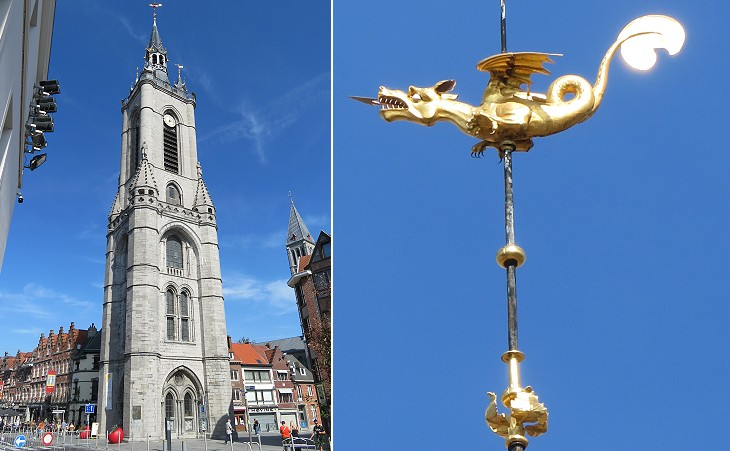 (left) Belfry (civic bell tower); (right) dragon weathervane, a symbol of the belfry watchmen in charge of alerting the population in case of fire, enemies or other events

With cathedrals for only mountains
And black church towers for greasy poles
Where stone devils take down the clouds
With the passing days as only journey
And paths of rain for only goodbye
With the west wind listen to it want
The flat land which is mine.
Lyrics translation of Le Plat Pays (The Flat Land), a 1962 song by Belgian Jacques Brel
The tall civic tower which complemented the fortifications of Tournai is regarded as the oldest (1187) of Belgium. It allowed a commanding view on the surrounding flat countryside. 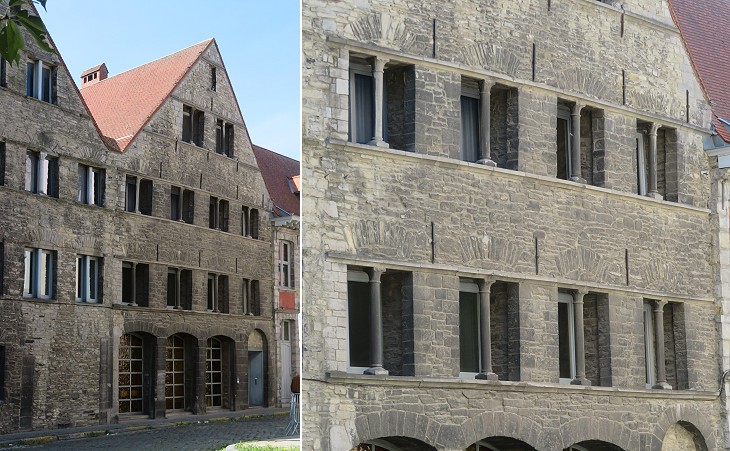