In 146 BC, at the end of the Third Punic War, the Romans destroyed Carthage and established their first province on the southern shore of the Mediterranean Sea; it was called Africa, a name the etymology of which is uncertain, and it comprised only of the northern part of today's Tunisia; the remaining possessions of the Carthaginians were assigned to the Kingdom of Numidia; in 105 BC the eastern part of this kingdom was annexed by the Romans and the province of Africa was enlarged to include the coastal strip from Tunisia to Syrtis Maior (today's Gulf of Sidra). 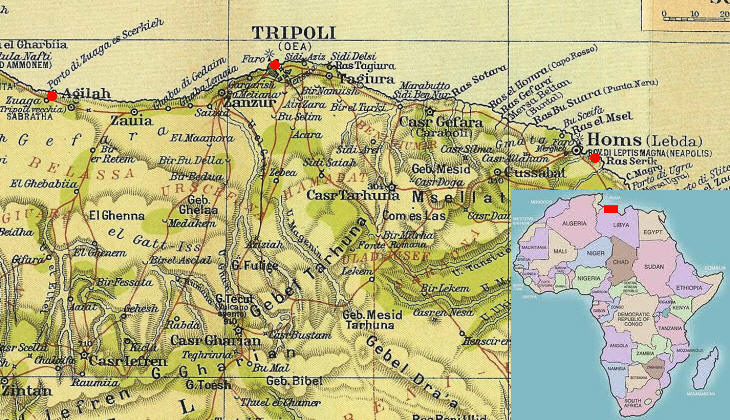 A section of the territories added to the province of Africa was called Tripolis (three towns) because of three ports located at approximately the same distance one from the other; of these ports Leptis Magna was the most important one and its municipality enjoyed special privileges for having supported the Romans in their fight against Jugurtha, an usurper to the Numidian throne. 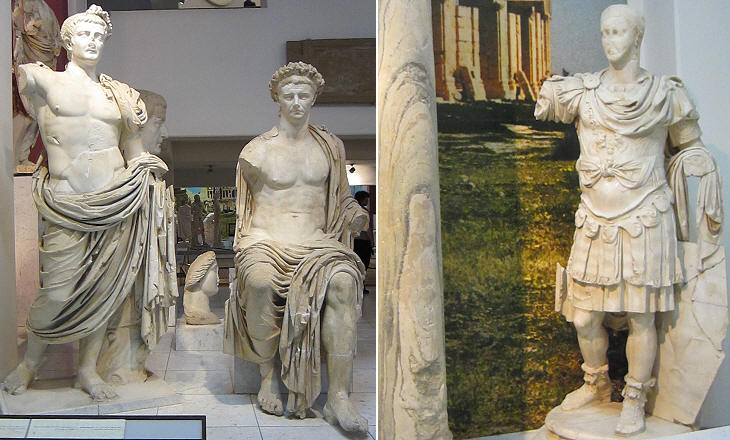 Museum of Tripoli: (left) colossal statues of Emperors Claudius (left) and Tiberius (right) from the old forum of Leptis Magna; (righ) statue of Emperor Septimius Severus from Leptis Magna near a cipollino column

Emperor Augustus expanded the Roman Empire to include almost all the coast of northern Africa by conquering Egypt and parts of today's Algeria; eventually Emperor Claudius annexed the Mediterranean coast of Morocco. The ensuing long period of peace was very beneficial for Tripolis, which acquired a significant role in supplying Rome with the commodities its large population needed. The presence of colossal statues of the emperors is an indication of the importance of these ports and in particular of Leptis Magna, where in 145 AD Emperor Septimius Severus was born. 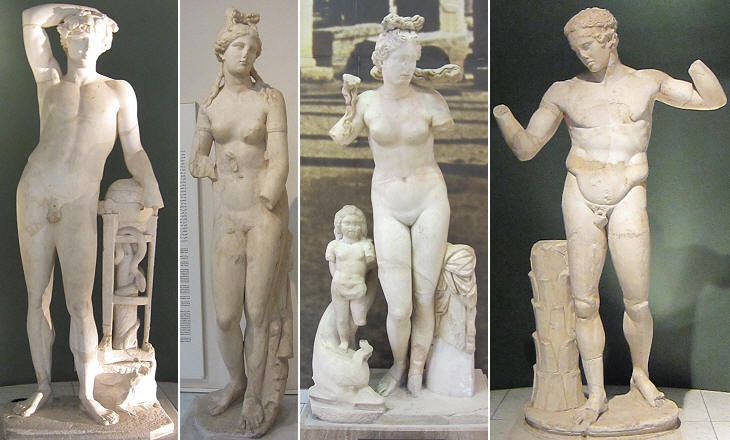 Museum of Tripoli - statues from Leptis Magna: (left) Apollo (with the head of Antinous) next to the tripod of Delphi; (centre) two statues of Venus of the type known as Capitoline Venus; (right) copy of "Diadumenos" (diadem-bearer), a lost statue by Polykleitos, a Greek sculptor of the Vth century BC, you may wish to see the copy found on Delos

Tripolis was scarcely populated and the Roman emperors favoured the settlement of veterans there; gradually the Romans mixed with the locals; the mother of Emperor Septimius Severus was of Roman descent, his father of Punic origin; Latin was widely spoken, but also the old Punic language was utilized; copies of classic statues were imported for the decoration of public facilities (in particular baths) and private houses.

Museum of Tripoli: detail of a mosaic from a villa near Leptis Magna showing fishing cupids and a ship reaching a port (you may wish to see the Room of the Fishing Cupids at Villa del Casale in Sicily)

The Carthaginians developed effective systems for growing olive trees and producing oil, which were improved by the Romans; cereals were another important commodity which was exported from Tripolis; the province of Africa was regarded as one of the granaries of the Empire; naves onerariae were ships particularly suited for transporting these commodities; their movement was mainly based on sails and they were relatively wide, while warships were propelled by oars and were long and narrow (you may wish to see a transportation ship in a "Carthaginian Shipping Lines" advertisement at Ostia). 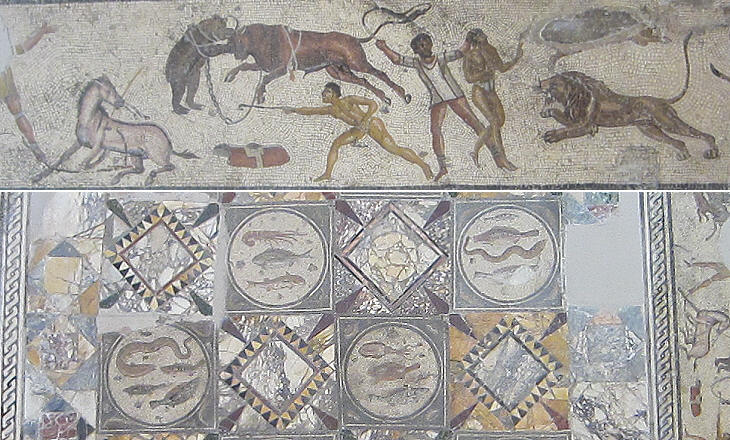 Museum of Tripoli: Mosaic of the Gladiators from Leptis Magna: (above) a detail showing "venationes", fights with or between large wild animals; (below) central part of the mosaic showing sea creatures

Large wild animals were shipped to Rome from the ports of Tripolis; some of them, such as Barbary lions, lived in the mountains near the coast, others came from sub-Saharan regions (see a mosaic at Hippo Regius showing how they were captured); caravans which crossed the desert carried also ivory in such large quantities that tablets of ivory were used for writing instead of papyrus or parchment; in 19 BC the Romans waged war on the Garamantes, tribes who lived in the interior, in order to protect trade routes across the desert. 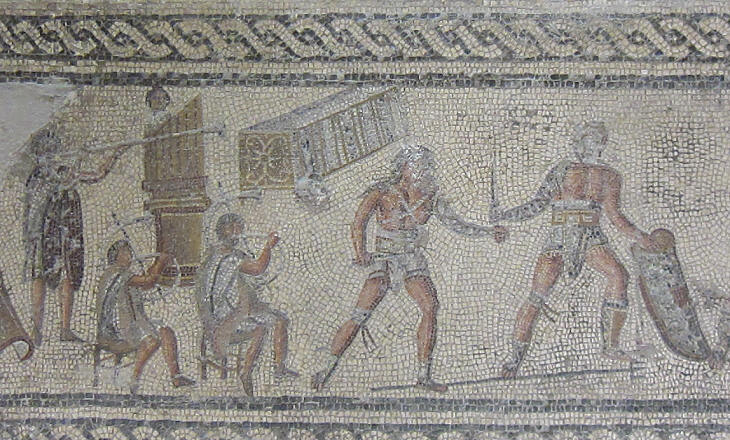 Museum of Tripoli: Mosaic of the Gladiators from Leptis Magna: detail showing a "hydraulis"

A remarkable aspect of the Roman Empire is the level of homogeneity it achieved in many aspects of life; fights between gladiators or with wild animals were popular throughout the whole empire and they were accompanied by a soundtrack; the players used various kinds of trumpets, but also a hydraulis, a pipe organ which was activated by water (see that depicted in a mosaic near Trier); the Romans developed a small portable organ, an example of which has been found at Aquincum, near today's Budapest in Hungary, at the furthest point of the Empire from Tripolis. 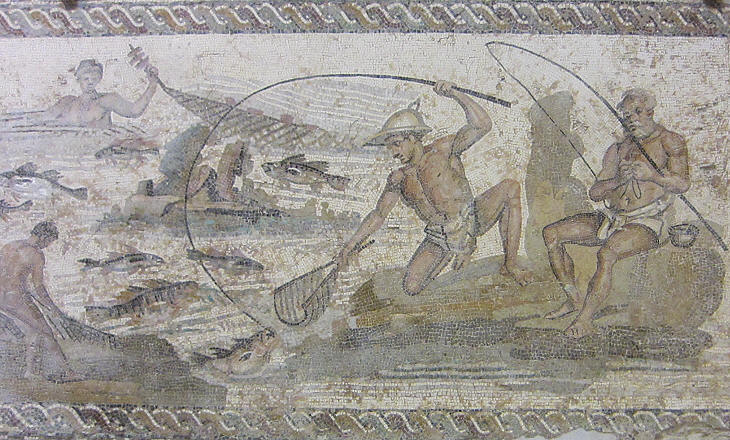 Museum of Tripoli: detail of a mosaic from a villa near Leptis Magna portraying fishermen on the Nile

The quality of the mosaics found in baths and private villas of Tripolis is excellent and comparable to that of other important cities of the Empire, such as Antioch. The subjects were mainly related to the sea; different species of sea creatures, scenes of fishing (especially angling, see a silver bowl found in Algeria), boats, marine monsters and gods. 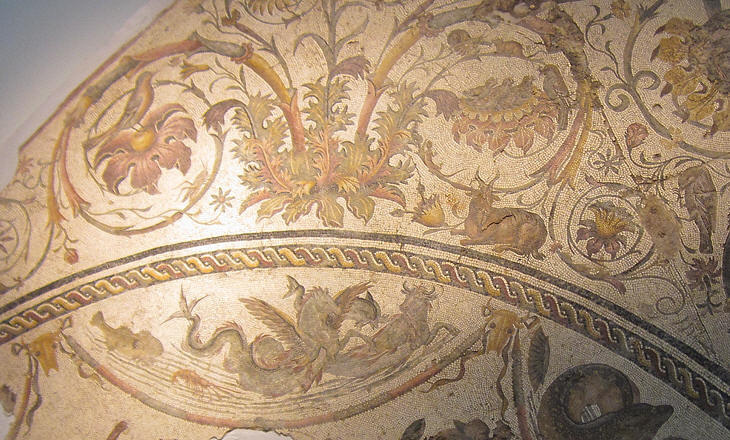 Museum of Tripoli: a small mosaic with a particularly elaborate use of different colours

The decline of Tripolis was due to the war between the Byzantine Empire and the Vandals who had established a kingdom in northern Africa in the Vth century and to the plague which halved the population of the countries around the Mediterranean Sea in the same period; these factors were aggravated by a process of desertification, the effects of which were already felt in the IIIrd century; in the following centuries the "granary of the Empire" became a barren land; while Sabratha and Leptis Magna gradually disappeared under the sand, Oea survived and eventually became known as Tripoli. 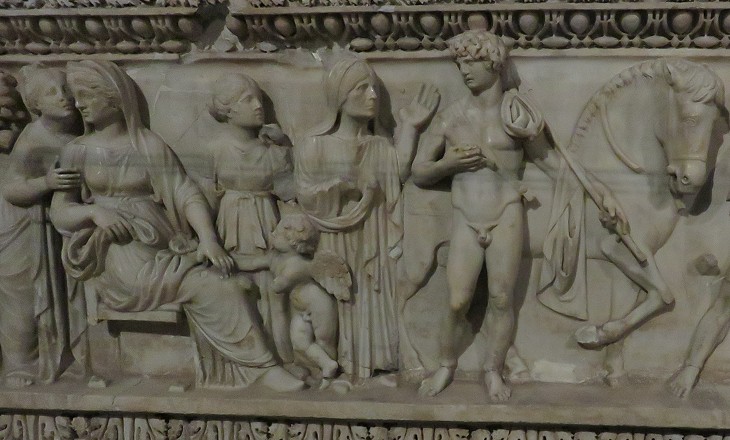 Archaeological Museum of Istanbul: sarcophagus from Tripoli (IInd century AD) depicting Phaedra (seated) and Hippolytus (by the horse), learn more about this myth

The image used as background for this page shows a portrait of Emperor Septimius Severus.

Move to other pages of this section:
Oea
Sabratha
Leptis Magna
or see a section on the carvings and paintings in the Libyan desert.