- Diyarbakir - Ulu Cami
(Detail of a relief at Karatepe)

You may wish to see an introductory page to this section with a map first. Diyarbakir is covered in this and three other pages showing: the walls, the gates and other monuments.

Ulu Cami, the Great Mosque of Diyarbakir is hardly regarded as a "must see" in a tour of Turkey, yet it would impress the general public and not only those who have a special interest in Islamic art. The buildings around the courtyard which leads to the prayer hall are a unique example of reutilization of ancient Roman structures. 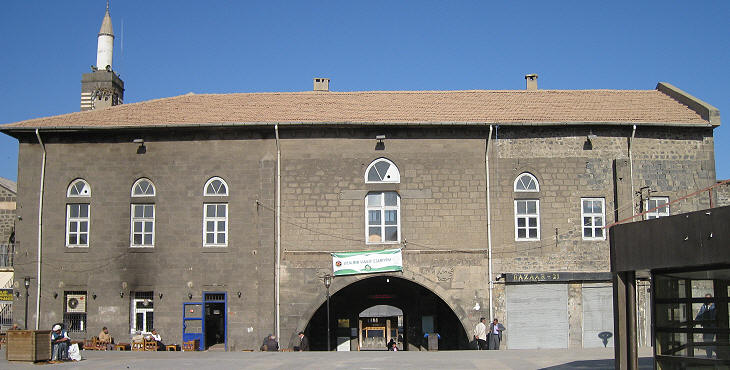 Ulu Cami: eastern (and main) entrance to the courtyard

Not far from the point of intersection stands the Ulu Jami' with its famous courtyard, enclosed to east and west by a two-storeyed portico, which has been conjectured to be either the remains of a church built by Heraclius or a Byzantine palace. The buildings need a more exhaustive study than the fanaticism of the Mohammadan population will at present admit, and the correct plan of mosque and court has yet to be made.
Gertrude Lowthian Bell - Amurath to Amurath - 1911
Ulu Cami and its ancillary facilities are located along Diyarbakir's main north-south street near its intersection with the main east-west road: in a Roman town the Forum and other important buildings were usually located in such a central position; it is therefore possible that sections of ancient buildings were incorporated into the Ulu Cami complex. An old arch in a modernized building leads to the courtyard eastern portico. 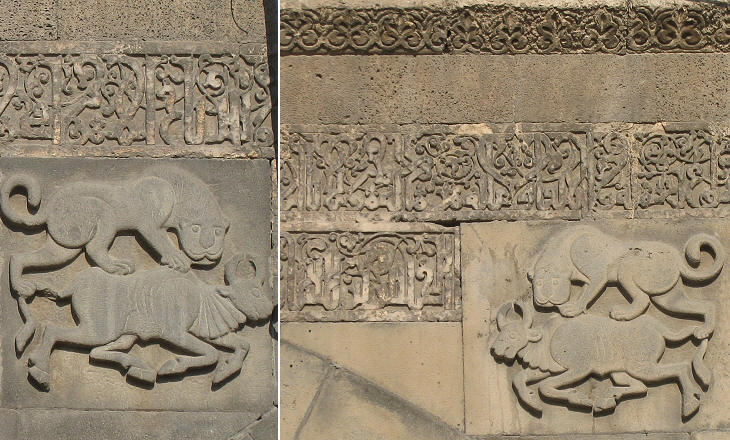 The arch leading to the courtyard is decorated with reliefs showing two lions attacking two bulls; similar reliefs can be seen on the palace of the Artukids rulers of Diyarbakir. When compared to the nearby very elaborate Kufic inscriptions these reliefs have a very naive appearance which is difficult to explain; the lion's tail in particular seems more a calligraphic exercise than the depiction of an actual tail. 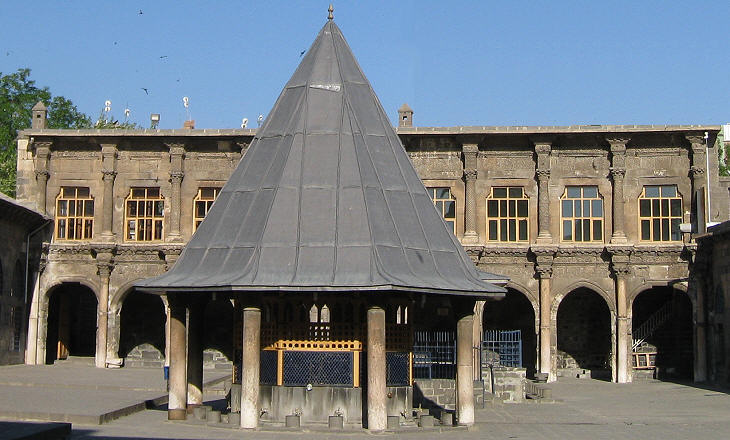 Ulu Cami: main sadirvan (fountain for ablutions) and behind it the western portico

The view of the rectangular courtyard is impaired by the oversized XIXth century roof of a sadirvan, yet the attention of the visitor is immediately captured by the design of the western portico. 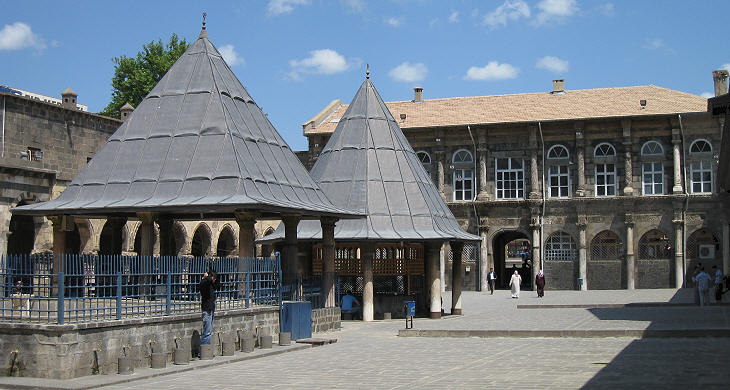 The courtyard is 63 meters/69 yards long and 30 meters/33 yards wide: it is aligned with the cardinal points; the mosque stands on its southern side because Diyarbakir is situated on the 40th Meridian of the Eastern Hemisphere which is the same as Mecca; for this reason all mosques of the town are built on a north-south axis; the orientation of the courtyard however, in addition to complying with Muslim requirements, is also consistent with the Greek/Roman approach of building on an east-west axis. 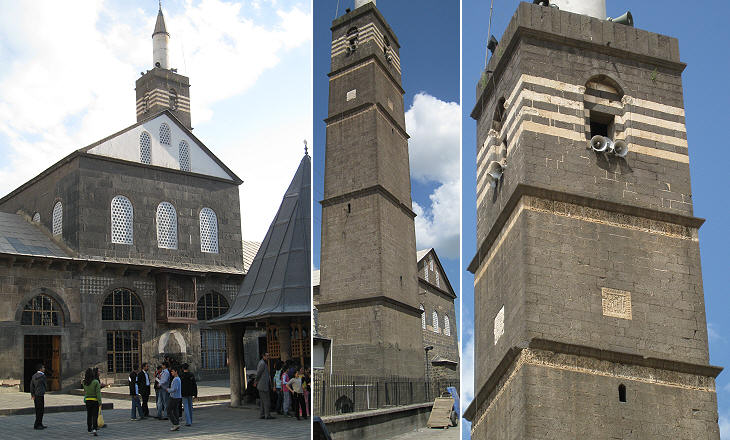 Ulu Cami: (left) central part of the façade; (centre/right) views of the minaret

Ulu Cami was built in 1092 on the site of a previous mosque which in turn replaced a church dedicated to St. Thomas; it is a very wide building in relation to its length; the interior is similar to that of the Great Mosque of Damascus. At the time of its construction Diyarbakir was part of a large Seljuk Empire founded by Malik Shah after the 1071 Byzantine defeat at Manzikert; it included parts of Anatolia, Mesopotamia, Persia and Syria. Malik Shah died in 1092; dynastic quarrels led to the dissolution of this empire. A few years later the heirs of Artuk, a general under Malik Shah, took control of Diyarbakir. The square minaret was built during the Artukid rule; its decoration based on white stripes and inscriptions is similar to that of a tower near Yeni Kapi. 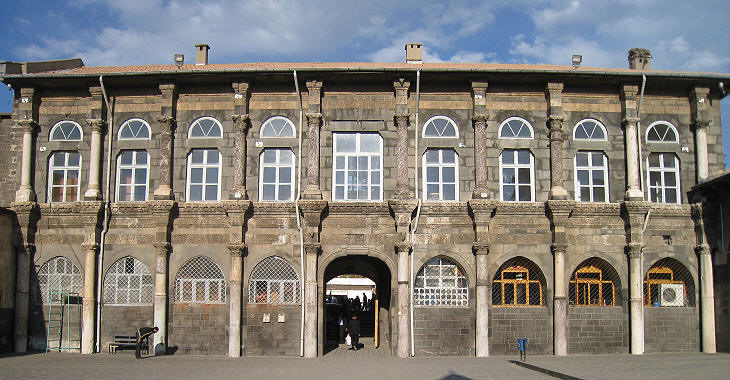 It is generally thought that the eastern portico is a reconstruction of a previous Roman building, not just that its columns and reliefs come from Roman monuments; this building could have been the scene of a theatre (see that of Bosra); in this case the columns and entablatures were the decoration of a blank wall, which later on was rebuilt as a portico.
In the upper storey the shaft of the columns is made of a single block, whereas in the lower storey two blocks were assembled to give the shaft the desired height: this could mean that while the upper storey has the same height of the original structure, the lower one is higher than the original. 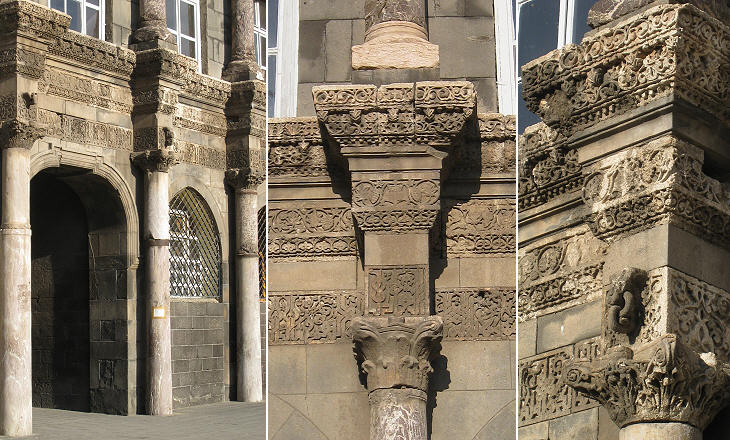 The decoration of the entablature is based on three bands; the oldest one is placed at the top; a frieze with a vine stalk forming loops around leaves and bunches of grapes is in a middle position and it probably belongs to a VIIth century Byzantine building; the lower band is a Kufic inscription of the Artukid period which says that the portico was completed in 1117.

The western portico was completed in 1164; its design is very similar, but not identical to that of the eastern portico; total symmetry was forbidden by Muslim beliefs, which considered it as a symbol of perfection and thus not achievable by human beings. 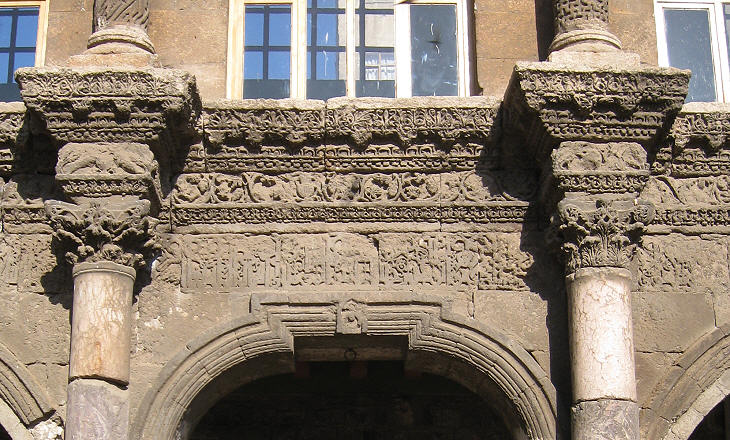 The porticoes are supported by pointed arches, but the central arch of the eastern portico and three arches of the western one are of a very unusual and elaborate design: this kind of broken arch is supposed to derive from patterns developed in Central Mesopotamia (today's Iraq). In Turkey it was first used in these porticoes. 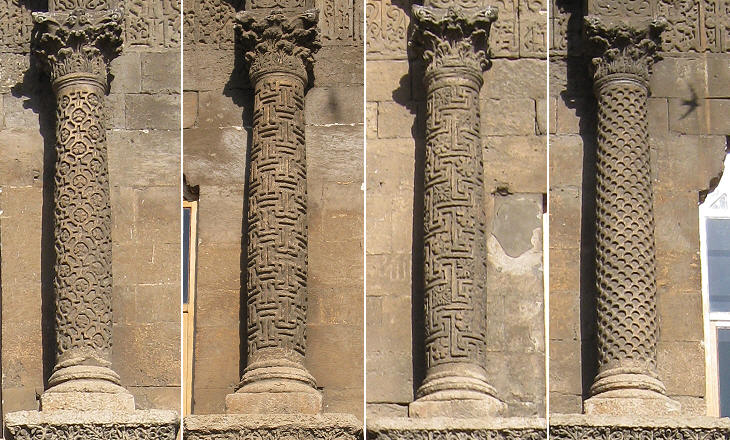 The Clash of Civilizations is a theory, proposed by political scientist Samuel P. Huntington, that people's cultural and religious identities will be the primary source of conflict in the post-Cold War world. The columns of the western portico which combine classical design with Islamic excellence in geometrical decoration suggest that at least artists know that there are better alternatives than confrontation and war.

Most of the northern side of the courtyard is occupied by a third portico built on columns with splendid Corinthian capitals; this portico leads to Mesudiye Medresesi which has also another totally different entrance.

The capitals are different in size and decoration, so they come various ancient buildings; it is possible that they were gathered and used for the mosque which preceded the XIth century Ulu Cami. Nasir Khusraw, a Persian poet and traveller who visited Diyarbakir in 1046, reported that the interior of the mosque was supported by hundreds of ancient columns. 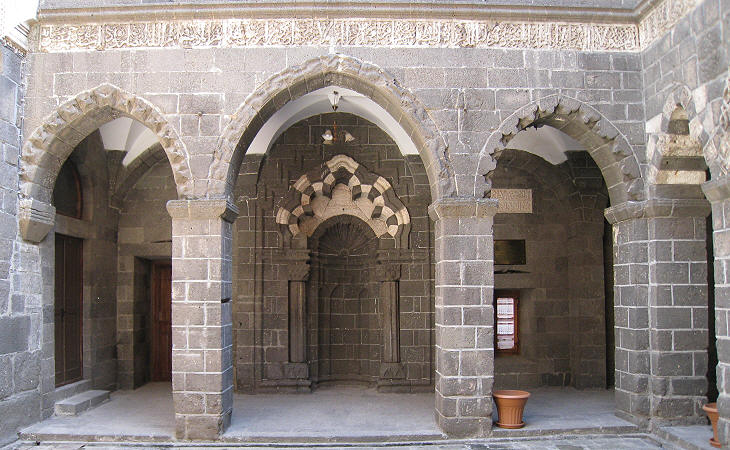 Mesudiye Medresesi, adjacent to the Ulu Cami and one of the first theological school in the region, was completed by the Artukids in 1198. Its decoration is based on the contrast between the prevailing black basalt stones and a white decoration, which is known as "cis". According to the inscriptions also canon law, medicine, physics, mathematics, biology, chemistry, literature and philosophy were taught. 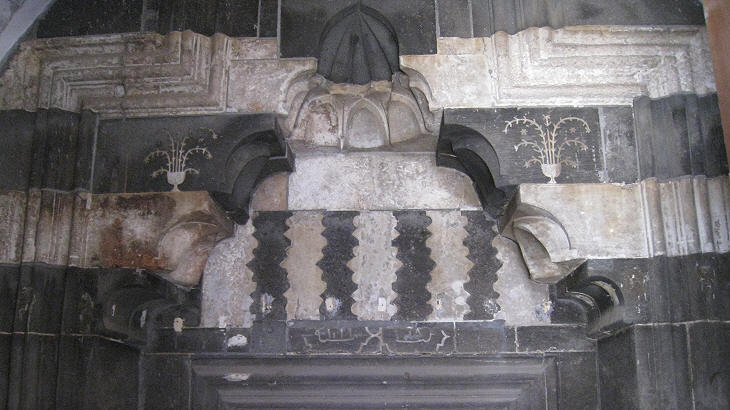 Mesudiye Medresesi: detail of its decoration with two fountains of life, one of which is shown in the image used as background for this page

Move to page four - other monuments or return to page one - the walls or to page two - the gates or go to: