You may wish to see an introductory page to this section or a page on the Harbour Neighbourhood first. 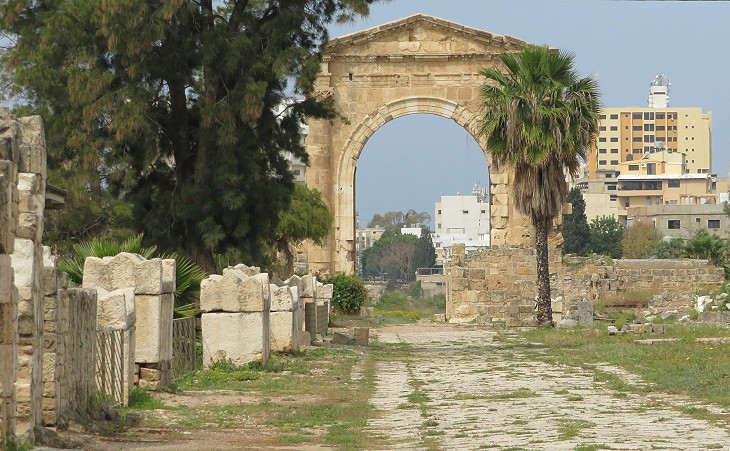 Al-Bass Necropolis: road leading to the town, tombs and sarcophagi at its sides and triumphal arch

The peninsula on which Tyre, now Sur, is built, was originally a long narrow island, parallel to the shore, and distant from it less than half a mile. (..) The isthmus was first created by the famous causeway of Alexander; which was enlarged and rendered permanent by the action of the waters, in throwing the sand over it broadly and deeply. At present, the isthmus cannot be much less than half a mile in width; and although consisting of loose sand, yet it is covered with traces of the foundations of buildings, probably out of the middle ages.
Edward Robinson / Eli Smith - Biblical Researches in Palestine and the Adjacent Regions - A Journal of Travels in the Years 1838 and 1852
Major excavation campaigns in 1946-1975 by Emir Maurice Chehab, Head of the Antiquities Services and Director of the National Museum of Beirut, discovered that the foundations of buildings in the isthmus were actually of the Roman period and they led to the creation of a large archaeological area which is so described in the 1984 UNESCO decision to include Tyre in the World Heritage List:
The sector of Tyre Al-Bass, constituting the principal entrance of the town in antique times, comprises the remains of the necropolis, on either side of a wide monumental causeway dominated by a Roman triumphal arch dating from the 2nd century AD. Among the other vestiges are an aqueduct and the hippodrome of the 2nd century, one of the largest of the Roman world. 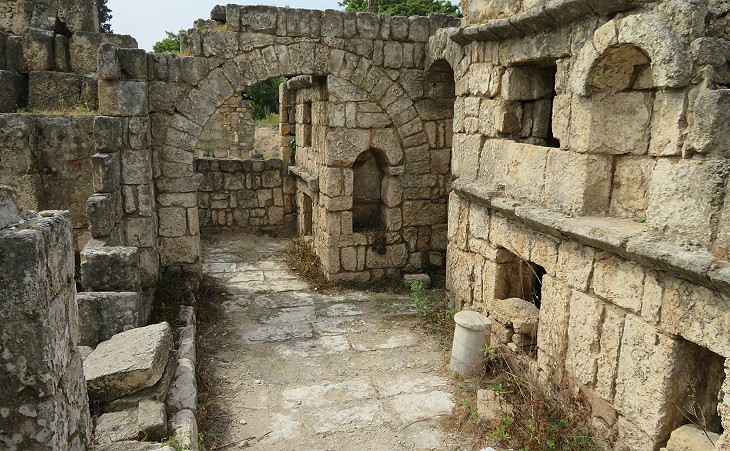 The layout of the necropolis at the sides of the main road leading to the city centre is similar to those which can be seen in other Roman towns, e.g. at Ostia. The necropolis consists of family tombs and of unrelated sarcophagi as at the Great Necropolis of Porto. The sarcophagi are scattered about or lined up along the road, but the latter is a modern positioning, most likely influenced by the Alyscamps (Elysian Fields), a road with sarcophagi outside Arles. 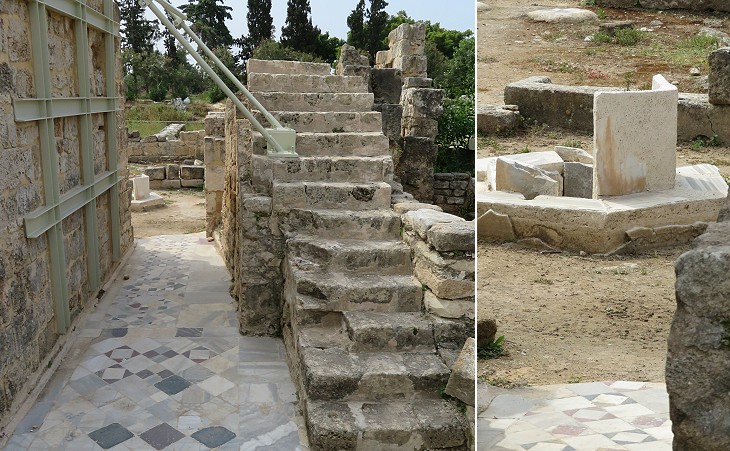 Family tomb with an upper storey, an "opus sectile" (marble inlay) floor and a garden with a fountain; according to some archaeologists it was turned into a church

Rich tombs have been found at the side of very modest ones. The luxury of the former testifies to the wealth of the merchants of Tyre. The members of the upper class of the town increased after 194 when Emperor Septimius Severus made Tyre the capital of Syria Phoenice, a newly established province. Some tombs were redesigned and decorated according to new patterns, opus sectile being typical of the Late Empire as one can see in Domus dell'Opus Sectile at Ostia. Cremation was the usual mode of burial in most parts of the Roman Empire until the IInd century AD when it was replaced by inhumation. Although large tombs were built for one person (e.g. Piramide di Caio Cestio), usually they were designed for a family. Columbarium means dovecote and it was a tomb with many small niches which housed the cinerary urns. When cremation lost ground in favour of inhumation, many columbaria were adapted to the new practice by digging an underground room where sarcophagi were placed or by removing some cinerary urns and creating arcosolia, large niches on the walls, which housed the sarcophagi of the most important members of the family. 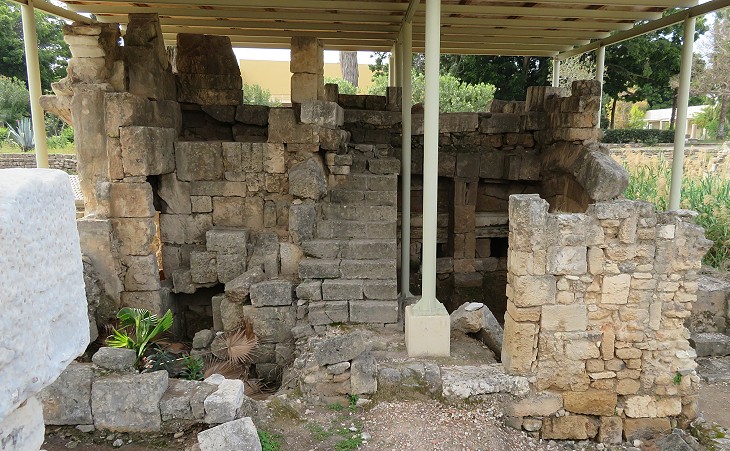 Tower Tomb, maybe "tower tomb" is more appropriate for those at Palmyra

Very often tombs had an upper storey where funerary banquets and other ceremonies were held (you may wish to see a page on Roman funerary rites and on the manufacture and trade of marble sarcophagi). Some very fine sarcophagi were found in this necropolis and are now on display in the National Museum of Beirut; they can be seen in another page. 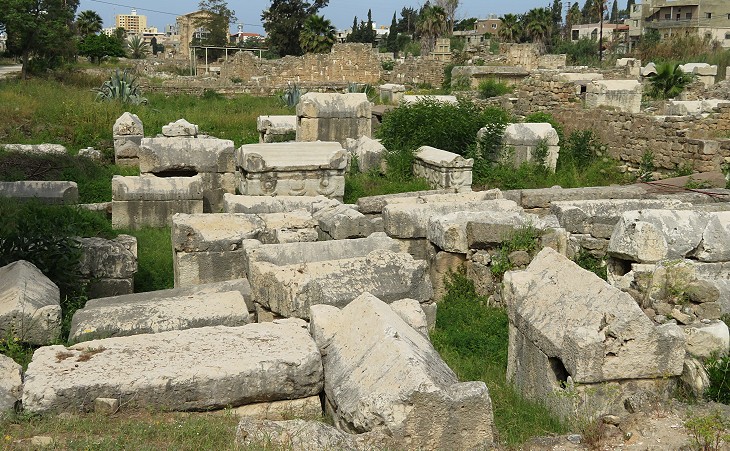 Most of the sarcophagi are made of the whitish marble which was quarried on Proconnesus, an island also known as Marmara because of its marble and which gave its name to the surrounding sea. They are characterized by having a gabled lid (see some similar sarcophagi at Assos, the town in Troas where the use of stone sarcophagi first began). They were most likely shipped to Tyre in an unfinished state and local sculptors completed their decoration. 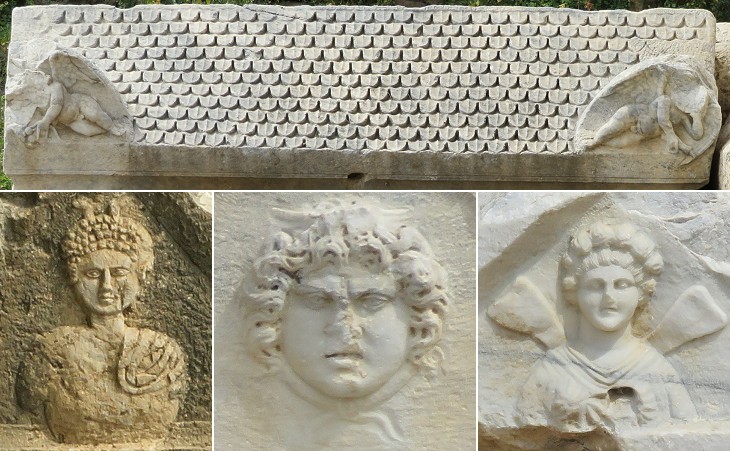 The lids of the most expensive sarcophagi had statues portraying the dead attending their funerary banquet (as in a sarcophagus in the National Museum of Beirut), but also some of the simpler sarcophagi which were left at Tyre had lids with a fine decoration. The two small angels carry poppy seed capsules (which Demeter, in despair over the seizure of her daughter Kore by Hades, ate in order to fall asleep and forget her grief) and a dying out torch, a symbol of death. The relief of a Gorgon protected the dead from evil spirits. In another relief Psyche, a personification of the soul, was portrayed with butterfly wings, a reference to the butterfly which departs from the chrysalis (see also a painted stela from Sidon portraying a butterfly and a sarcophagus at Arles). (left/centre) Details of boxes of sarcophagi in the necropolis; (right) relief from the box of a sarcophagus from Tyre at the Airport of Beirut

Bucrania (ox-sculls) between garlands of fruits and flowers were a popular decorative motif in Rome (see an altar and the Mausoleum of Cecilia Metella). Ox-sculls were a reference to sacrifices, but in the decoration of the boxes of some sarcophagi of the necropolis they were replaced by bull heads with the flowers and ribbons with which they were adorned before the sacrifice (see a relief of the Arch of Trajan at Benevento). The boxes of less expensive sarcophagi were decorated with simple geometric motifs, one of which can be seen in the image used as background for this page. 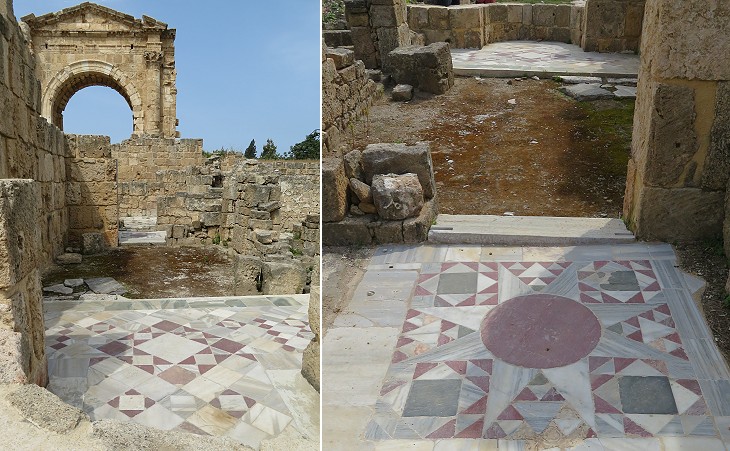 A church with fine opus sectile floors was built very near the triumphal arch. A small apse is clearly identifiable, while the space before the entrance was perhaps a narthex from which catechumens watched the ceremonies by remaining outside the building. A small fresco portraying the Virgin Mary was found in a tomb dated 440. In general there is limited evidence of the Christian use of the necropolis, which instead contains remains of small temples or just niches which housed statues of deities. 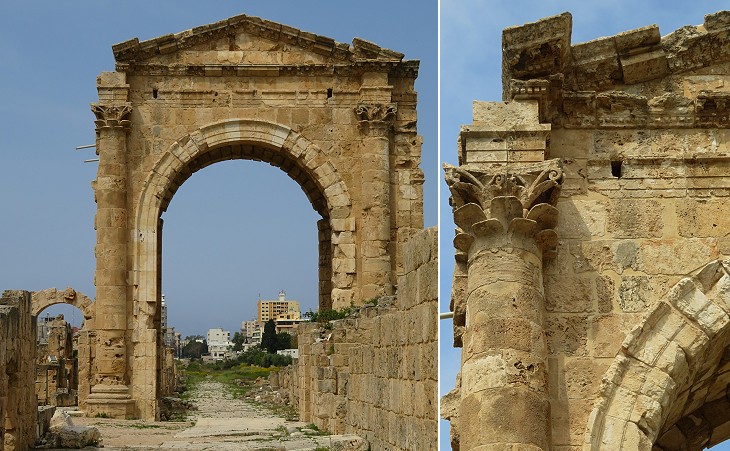 Emperor Hadrian visited Tyre in 130 or 131 and it is possible that the arch was erected to celebrate that event as it occurred at Antalya and other locations. For a time archaeologists thought that it marked the beginning of the causeway built by Alexander, but today this opinion is dismissed. The level of the street is slightly higher than it was when the arch was built because it was repaved in the Vth century. 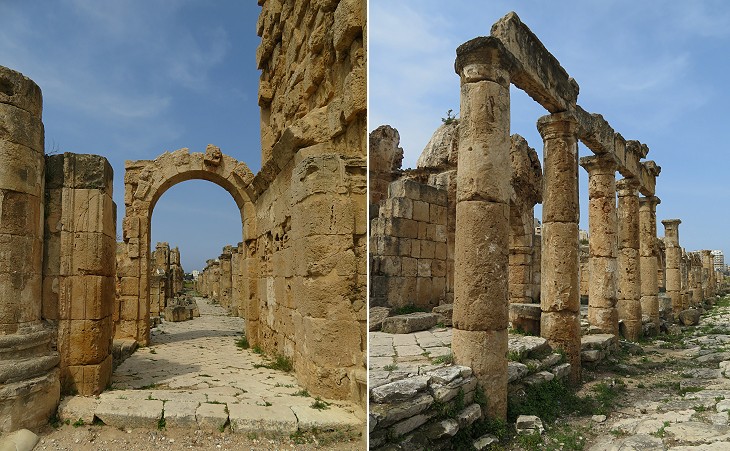 (left) One of the two side passages for pedestrians; (right) colonnaded street which started after the gate

It is likely that the smaller arches were part of a wall having niches for housing statues as one can see at Jerash in another arch erected to celebrate Hadrian or at Thamugadi in a later arch. The street after the gate was flanked by a portico and by the arches of an aqueduct inside which shops were nested. Roman towns competed in having the longest colonnades with perhaps Apamea in Syria being the winner. 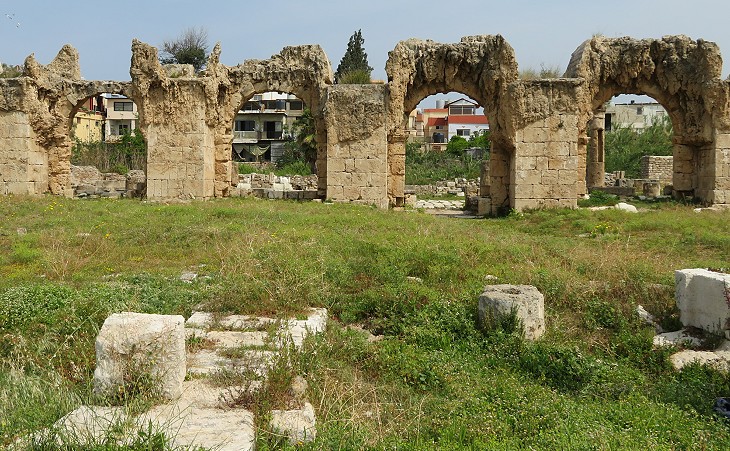 Arches of the aqueduct and in the foreground evidence of "carceres", the starting boxes of the Hippodrome (see them in a mosaic at the Museum of Girona in Spain)

Ras el Ain has its name as being the fountain head of the aqueducts by which Tyre was anciently supplied with water. The place lies in the plain hardly a quarter of an hour from the sea shore and one hour from Tyre on the direct road. (..) Directly from this fountain an ancient aqueduct goes off NNE through the plain exhibiting strong and excellent masonry with round arches and a continuous cornice above them, evidently of Roman architecture. Edward Robinson / Eli Smith
The Roman aqueduct has an approximate length of 7 Km; some of its arches and the spring from which it started were described by many travellers. 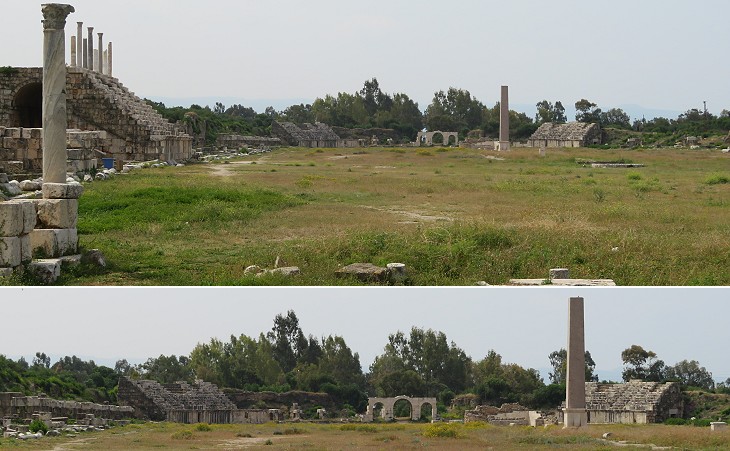 Views of the southern part of the Hippodrome

The excavation campaigns carried out in 1946-1975 led to the unexpected discovery of a large hippodrome (or rather a circus because its design followed Roman patterns) for chariot races. Its seating section was partly reconstructed to convey a feeling of its original appearance. It is dated IInd century AD, a period during which many provincial towns built circuses, because chariot races had become a very popular form of entertainment. It remained so also after Christianity became the official religion of the Empire (you may wish to see a relief portraying Emperor Theodosius in the Hippodrome of Constantinople). 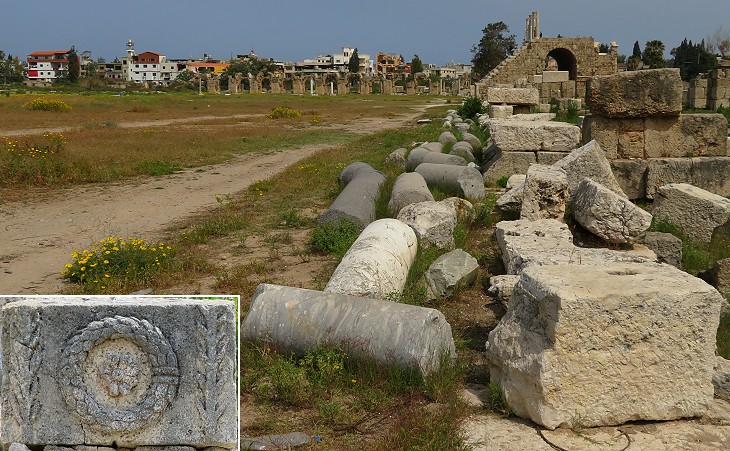 View of the northen part of the Hippodrome; (inset) decoration of a stone

Archaeologists found evidence of two buildings with inscriptions celebrating the Greens and the Blues, two of the factions which took part in the races with one, two or even three chariots (the other factions were the Reds and the Whites). You may wish to see lively depictions of the races in mosaics at Barcelona, in Sicily and in Tunisia and charioteers in their coloured costumes in Roman mosaics and the circuses of Merida and Tarragona in Spain and Circo di Massenzio along Via Appia in Rome. 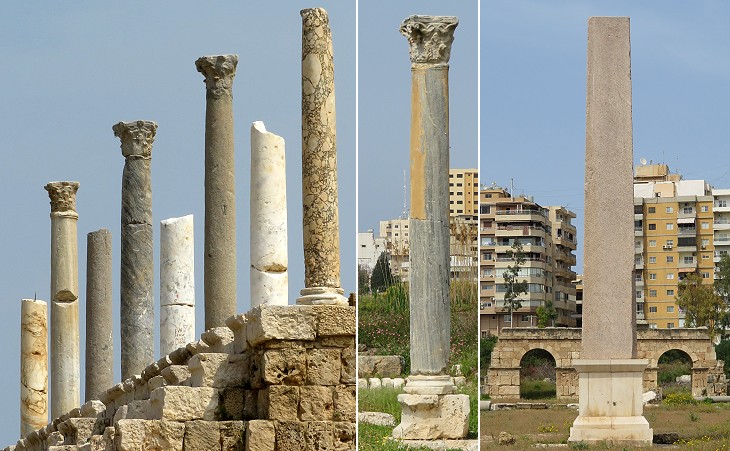 Hippodrome: columns of many different stones and the obelisk at the centre of the "spina" (thorn), the raised area around which the chariots raced

Move to the The Exhibits from the Al-Bass Necropolis in the Museum of Beirut or to The Roman Southern Harbour Neighbourhood.