May 5th, 1812 - I took a guide to shew me to Om Keis, which, I was told, was inhabited by several families. I there intended to pass the night, and to proceed the next day to Feik, a village on the E. side of the lake of Tabaria (Tiberias).
J. L. Burckhardt - Travels in Syria and the Holy Land - 1822 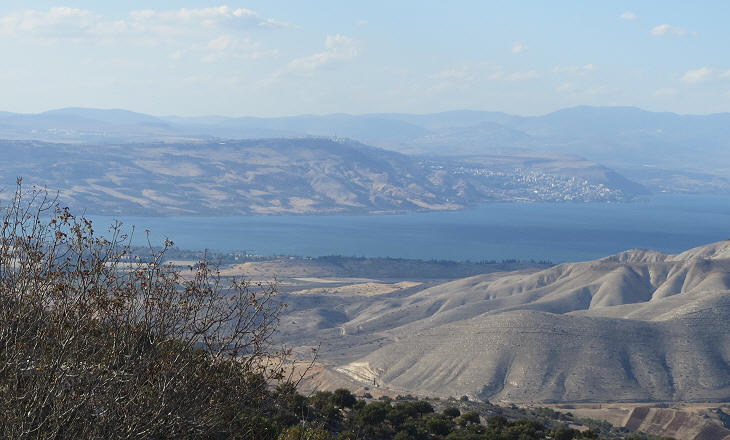 Tiberias and the Sea of Galilee seen from Umm Qays

Om Keis is the last village to the west, in the district of Kefarat; it is situated near the crest of the chain of mountains, which bound the valley of the lake of Tabaria and Jordan on the east.
Umm Qays enjoys a wonderful view over the Sea of Galilee: today the territory shown in the photo is partitioned among four countries: Umm Qays is situated at the north-western end of Jordan, the bald hills in the lower right corner of the image are part of the Golan Heights which are internationally considered Syrian territory, the Lake of Tiberias (aka the Sea of Galilee) is in Israel and the mountains in the far distance are in Lebanon. 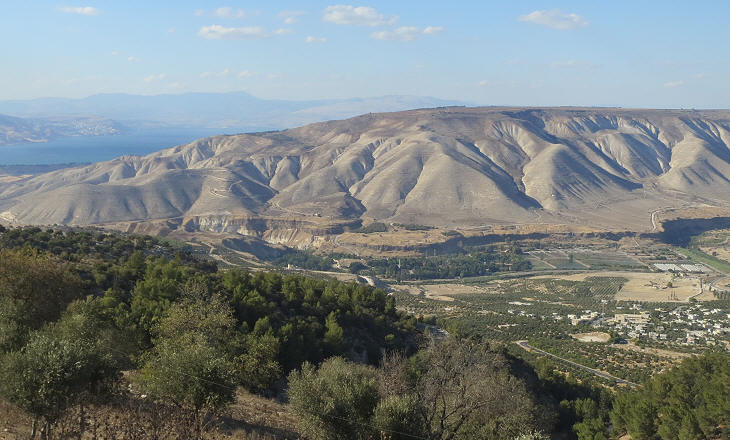 To the N. of it, one hour, is the deep Wady called the Hieromax of the Greeks and Jarmouk of the Israelites.
The River Yarmouk is the main tributary of the Jordan and its valley was a historical way of passage between Syria and Palestine. In 636 a large Byzantine army was defeated there by Muslim Arabs in a crucial six-day battle. The Byzantines were unable to regroup and to prevent the fall of Damascus. Eventually they abandoned the whole of Syria. 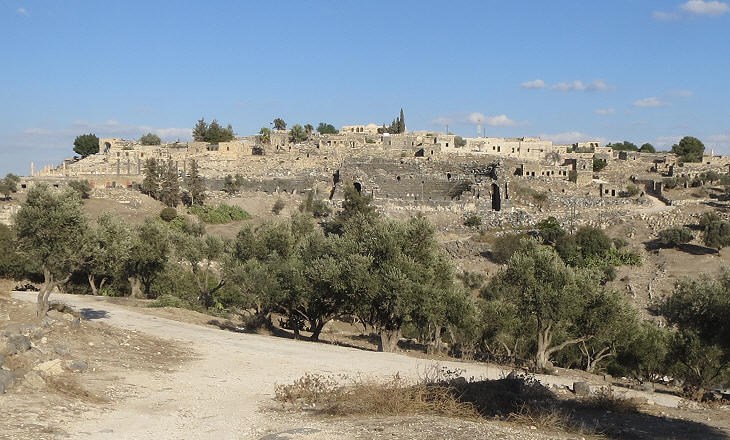 I am doubtful to what ancient city the ruins of Om Keis are to be ascribed. At Om Keis the remains of antiquity are very mutilated. The ancient town was situated round a hill, which is the highest point in the neighbourhood. Burckhardt
Ulrich Jasper Seetzen, a German explorer, gave a very short account of his visit to Om Keis, but was the first to indicate it could have been the ancient Gadara: We set off the next morning (Feb. 23, 1806) for M'kess. This town is situated in an angle of a high mountain. (..) It was formerly a large and opulent town, proofs of which are still visible in remnants of marble colunms, and of large buildings. (..) I thought there was reason to believe that M'kess was the ancient Gadara, a town of the second rank among the decapolitan cities.
A Brief Account of the Countries Adjoining the Lake of Tiberias, the Jordan, and the Dead Sea - 1810
Archaeologists and historians have established that the ruins of Umm Qays belong to Gadara, an ancient town which was part of Decapolis, a loose federation of ten towns to which the Romans granted some degree of self-government. In addition to Damascus it included Canatha (Qanawat), Scythopolis (Bet She'an), Gerasa (Jerash), Pella, Philadelphia (Amman) and other minor towns. 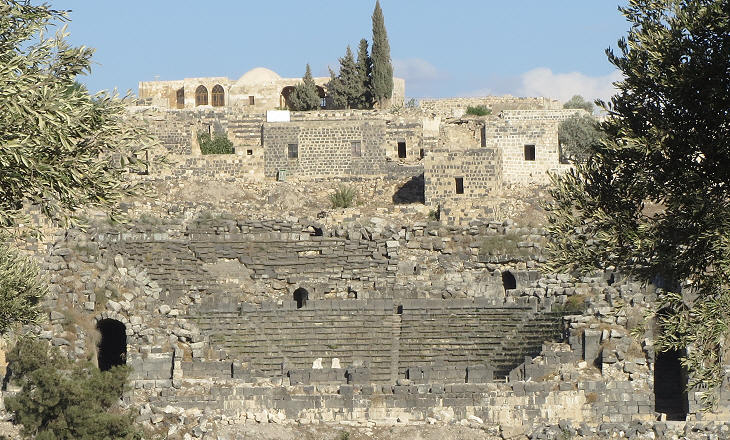 On the summit of the hill are heaps of wrought stones, but no remains of any important building: on its west and north sides are the remains of two large theatres, built entirely of black stone. That on the W. side is in better preservation than the other, although more ruined than the theatres at Djerash. Burckhardt
It is difficult to assess the population of ancient Gadara, however considering the size of the area covered by its ruins, it must have been a rather small town. The construction of two theatres was unlikely to respond to actual needs, but it showed the wealth of the town. The western theatre was situated on high ground so that it was immediately visible to travellers arriving at Gadara. 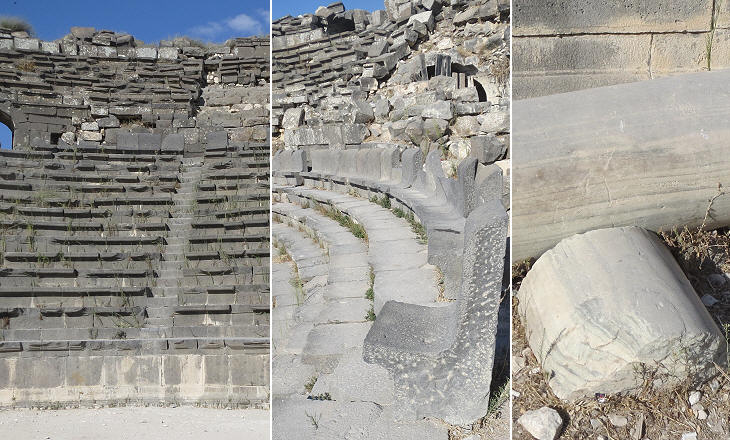 The walls and the greater part of the seats yet remain; a tier of boxes intervenes between the rows of seats, as at Djerash, and there are deep vaulted apartments beneath the seats. There are no remains of columns in front of either theatre.
The western theatre was not cut into the rock. Vaulted passages allowed the audience to reach the upper tier. Archaeologists have eventually found remains of columns from the proscenium which Burckhardt did not notice. The cipollino ones came from Greece. Their use was very popular in the IInd century AD. 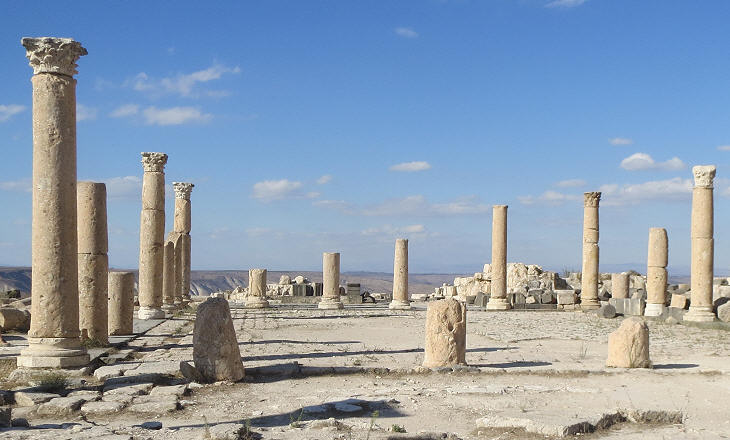 Basilica near the Western Theatre

With the exception of the theatres, the buildings of the city were all constructed of the calcareous stone which constitutes the rock of every part of the country.
The columns were made from local stone, but white marble was used for most of the capitals. The basalt stones with which the theatres were built came from the northern shore of the Sea of Galilee (you may wish to see Korazim, a town built using basalt). 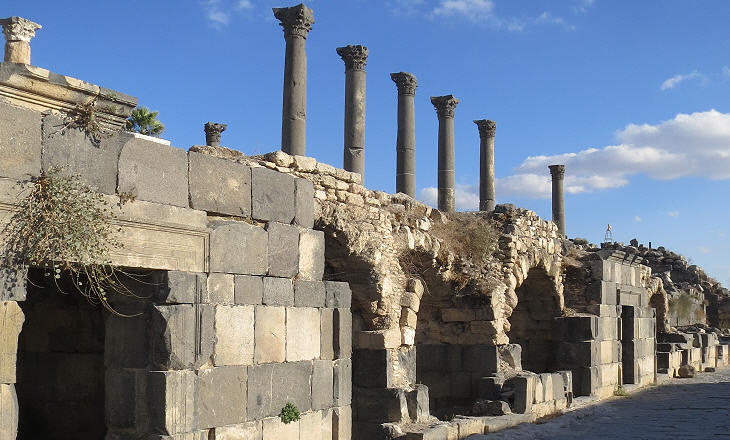 Shops along Cardo Maximus which were turned into houses

The habitations of Om Keis are, for the greater part, caverns.
In 30 BC Emperor Augustus assigned Gadara to King Herod the Great, but at the death of the latter in 4 BC the town returned to be part of the Roman province of Syria. During the First Jewish Revolt (66-73 AD) Emperor Vespasian set fire to the town which was rebuilt according to the traditional Roman layout; its Cardo Maximus (main north-south street) was much shorter than its Decumanus Maximus (main east-west street), because of the shape of the hill where Gadara was located. 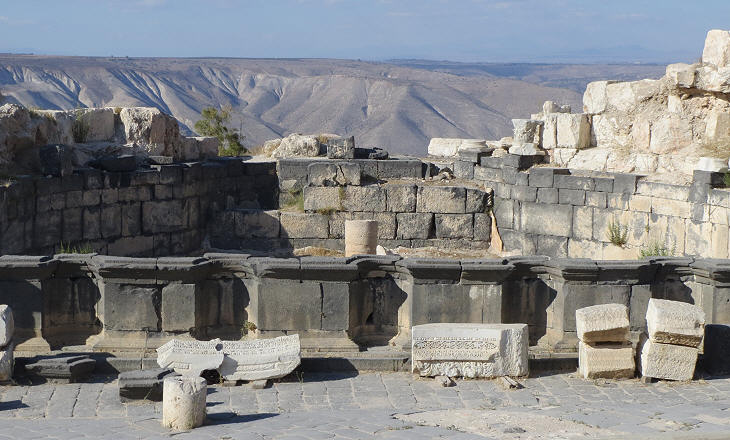 In 2004 German archaeologists identified the longest (54 miles) known underground ancient tunnel. It carried water to Gadara from a swamp in Syria to supply the fountains and baths of the town. Some sources say its construction was promoted by Emperor Domitian, Vespasian's son, others say by Emperor Hadrian, who is known for having recommended many similar bold undertakings such as the aqueduct of Carthage. 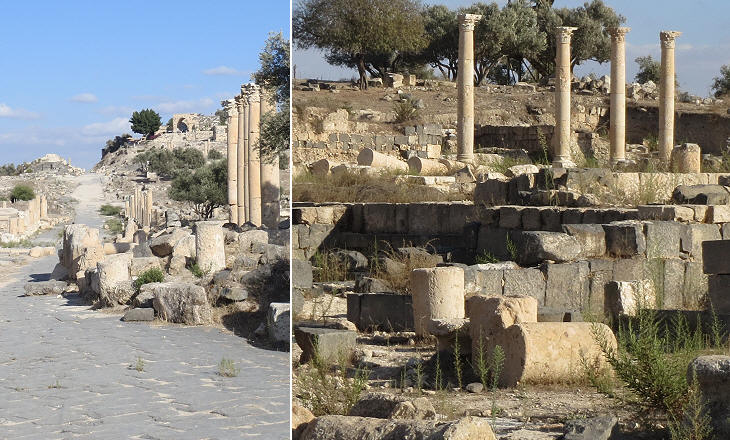 From these two theatres the principal part of the town appears to have extended westwards, over an even piece of ground at the foot of the hill; its length from the hill was at least half an hour. Nothing is at present standing; but there are immense heaps of cut stones, columns, etc. dispersed over the plain. A long street, running westward, of which the ancient pavement still exists in most parts, seems to have been the principal street of the town. On both sides there are vast quantities of shafts of columns. At a spot where a heap of large Corinthian pillars lay, a temple appears to have stood. (..) There is no water but what is collected in reservoirs during rains; these were quite dried up, which was the occasion, perhaps, of the place having been abandoned, for we found not a single inhabitant.
The once flourishing town of Gadara was probably completely abandoned after a major earthquake, known as the "Earthquake of the Sabbatical Year", struck the region around the Sea of Galilee in 747 or 749 AD. 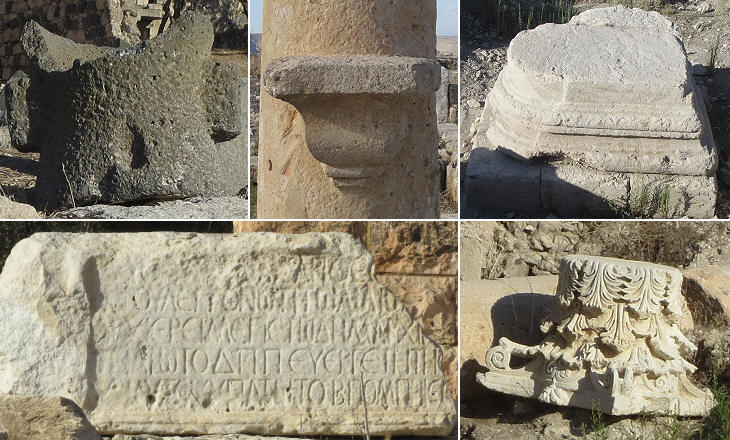 Details: (above-left) a basalt millstone; (above-centre) a support for the statue of a donor on a column (similar to those at Apamea); (above-right) heart-shaped section of columns at the corner of a square portico (you may wish to see the entire columns at an ancient synagogue at Capernaum on the northern shore of the Sea of Galilee); (below-left) Greek inscription; (below-right) Corinthian capital

The image used as background for this page shows a Corinthian column along Decumanus Maximus.