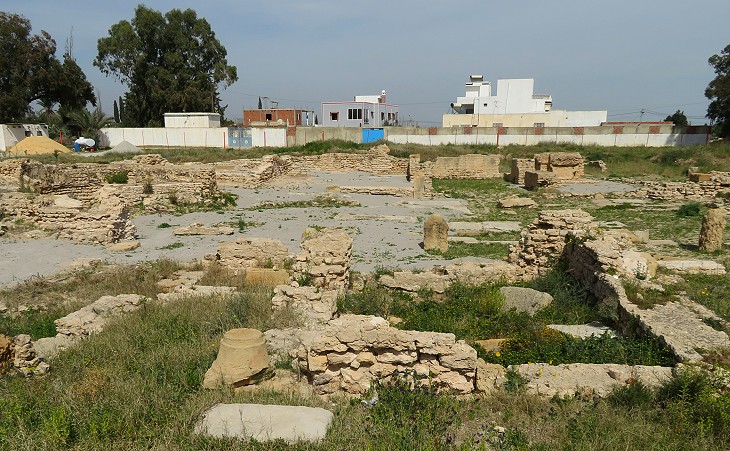 Overall view of the funerary basilica of Uppenna

Let me begin with a blasphemous statement: there are no disinterested researches, in archaeology less than in other sciences. (..) Archaeological campaigns are expensive in terms of time, human resources and money. They are not undertaken unless one expects to find something interesting. (..) You do not start excavations unless you have already an idea of what you are likely to discover. (..) This initial assumption is likely to influence all those who are involved in the matter including local authorities, the Church and the public in general.
Free translation from Jean-Marie Pailler - The Discovery of an Early Christian Basilica at Uppenna in 1905. Among Scientific Research, Ideological Divisions and Colonial Justification - Anabases 9/2009 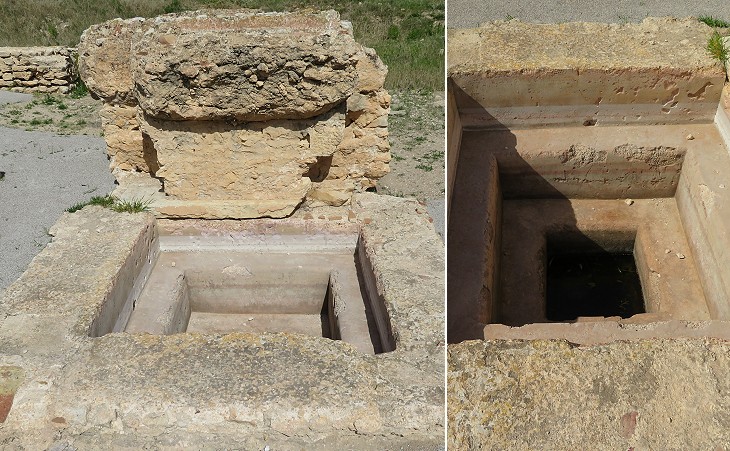 Uppenna is situated few miles south of Pheradi Majus along the road which linked Carthage with Hadrumetum (Sousse). The excavation campaign was prompted by the finding of an inscription on a tombstone which mentioned a bishop Oppenensis (of Uppenna). It was mainly conducted between November 1904 and February 1905 by a local railroad engineer. In May 1905 the site was recorded as a Byzantine basilica with a baptistery and Paul Gauckler, Head of the Department of Art and Antiquities of the French Administration of Tunisia, recommended the removal of the floor mosaics to the Museum of Bardo. 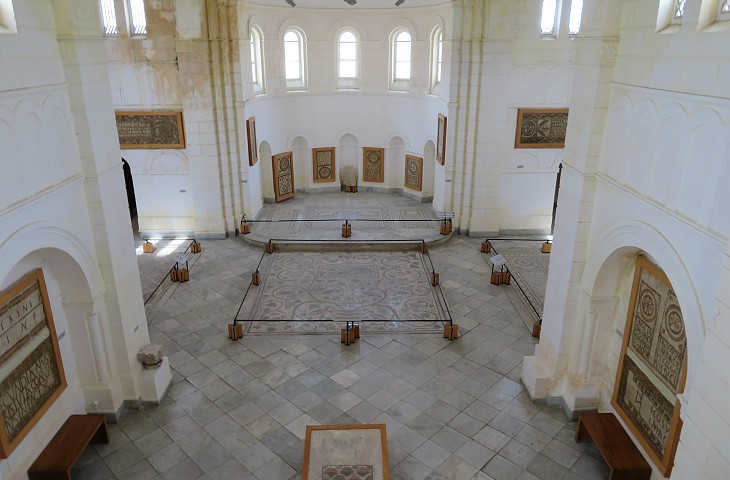 Archaeological Museum of Enfida inside the former parish church of St. Augustine

The proposal by Gauckler was rejected by Société Franco-Africaine which owned a very large estate around Uppenna and had established its headquarters at Enfidaville, a new settlement in the process of becoming a sort of small capital of a "capitalistic" state with French schools, a Catholic church, a railway station, a post office and other modern facilities. The company suggested the reconstruction of the basilica to turn it into a local attraction. Eventually it was decided to move the finest mosaics to the church of Enfidaville. 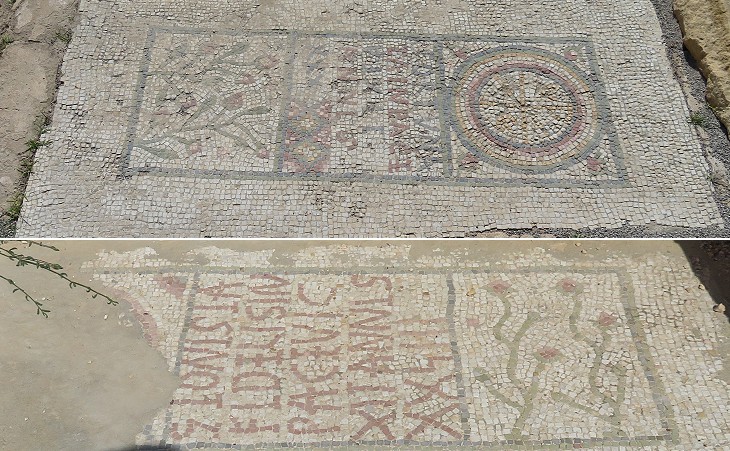 The removal of the mosaics was completed in May 1907, but the proposed action to rebuild the basilica or at least shelter its ruins and the other mosaic tombstones was not pursued. Today the site is not even fenced, although a warden made his appearance during my visit. See other mosaics which would require fencing and sheltering at Clypea (Kelibia). 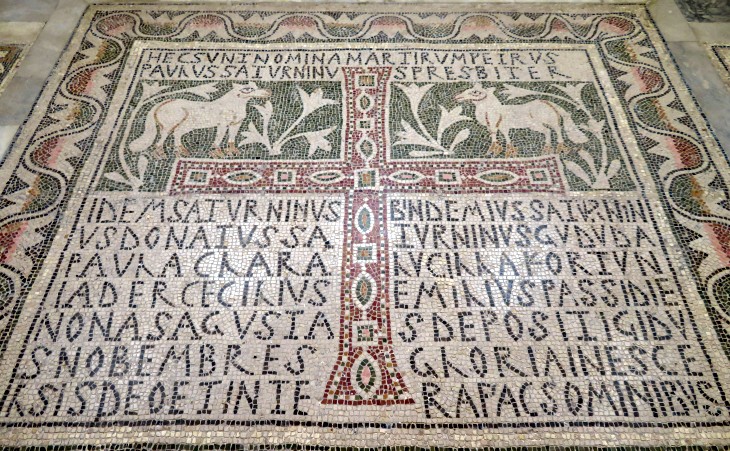 Archaeological Museum of Enfida: Mosaic of the Martyrs from the apse at Uppenna (see the "Crux Gemmata" (Jewelled Cross) and the lambs in the apse of S. Apollinare in Classe at Ravenna ca 549)

A key element in the decision to relocate the works of art of Uppenna to a church was the finding of a very fine floor mosaic mentioning a number of martyrs who were associated with St. Peter and St. Paul. At the inauguration of the church Clément Combes, Archbishop of Carthage stated: Twelve centuries have elapsed on this land, on these fields of dead; and now thanks to our hands the Cross is planted again in the ground after so many revolutions; and its roots find everywhere a ground retaining the sufferings, the tears, the blood of the first Christians. Twelve centuries have elapsed and we have come back to start again a broken tradition. Also the excavations at the amphitheatre of Carthage were aimed at highlighting the Christian presence in Tunisia. In 1964 the properties belonging to French and Italian farmers at Enfida were nationalised and the church was deconsecrated and turned into a museum. 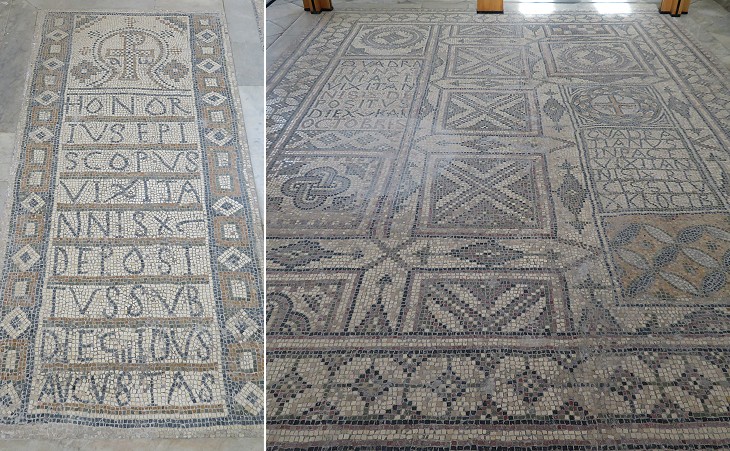 Archaeologists have been able to date some of the tombstones and to find evidence of the persons who were buried. Honorius was a Catholic bishop who was persecuted in 484 by Huneric, a Vandal king who supported the Arian heresy. Quadratianus must have held some important role in the clergy at Uppenna because his mosaic tombstone was enlarged and a second inscription was added. As a matter of fact when in Tunisia we speak of Christian martyrs it is more likely that they were killed by other Christians, rather than by Pagans. The Catholic Church saw with favour the archaeological campaign at Uppenna on the assumption that the basilica had not been an Arian or Donatist one. Mosaic tombstones are typical of Tunisia; see some fine examples at the Bardo Museum of Tunis.

The Romans had laws which imposed that people should be buried outside the town walls and they did not build mausoleums inside their temples. They did not focus on afterlife nor on concepts such as being judged according to one's deeds. These aspects had a great importance for the Early Christians who felt that the Apocalypse was imminent. In this context being buried next to the site of a martyr/saint was a meritorious act of piety. Some early churches appear to have been built with the primary purpose to be a burial site. That at Uppenna falls into this category and similar churches can be found in other ancient Roman towns, e.g. at Tipasa in Algeria and Salona in Dalmatia. 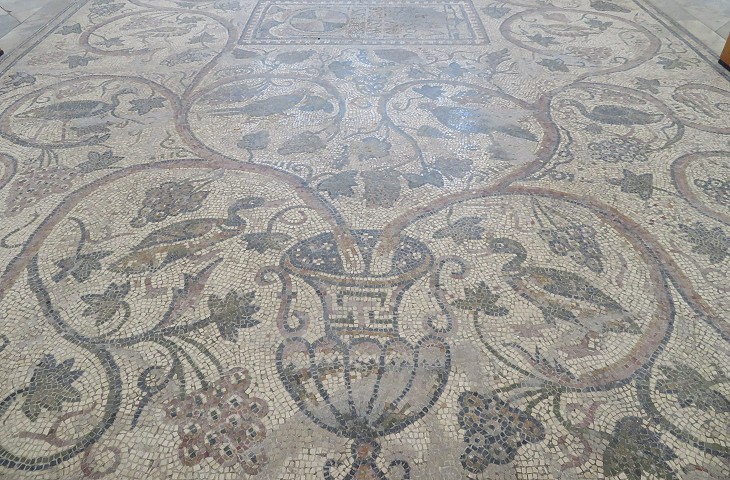 The excavations at Uppenna were driven by religious rather than by archaeological interest. From accounts and some photos we know that the basilica had floor mosaics similar to those found at Sidi Abiche, another location in the proximity of Enfida. When the decision was taken to remove the mosaic to St. Augustine's only the sections containing a tombstone were selected and the other ones were left to rot.
Luckily at Sidi Abiche another pattern was followed and attention was paid to save and restore a large floor mosaic with many Christian symbols which however followed previous pagan patterns. The image used as background for this page shows a fragment of another mosaic from Sidi Abiche. It depicts a lamb and it is very similar to a mosaic tombstone at Tarragona.
You may wish to see a collection of early Christian mosaics at Beiteddine in Lebanon and in churches at Madaba in Jordan. 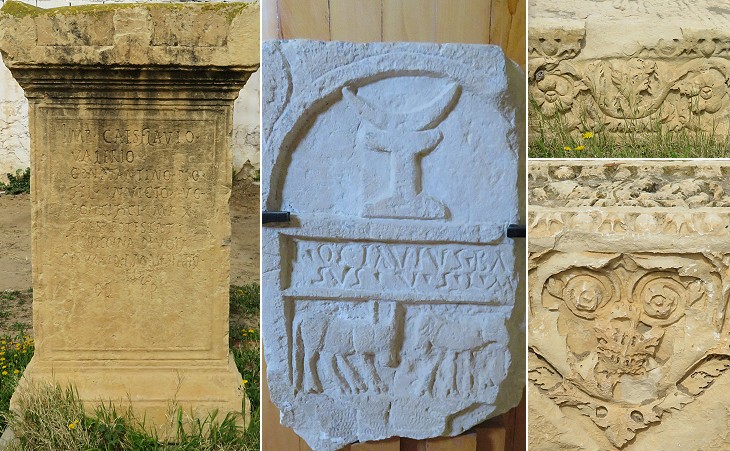 Other exhibits at the Archaeological Museum of Enfida: (left) inscription celebrating Emperor Constantine with the name of the town "Uppenna devota"; (centre) stela to Saturn; (right) decorative reliefs