Porta Pinciana
(Vasi at work in the Grand View of Rome)

Links to this page can be found in Book 1, Map A2, Day 2, Rione Colonna and Rione Campo Marzio. 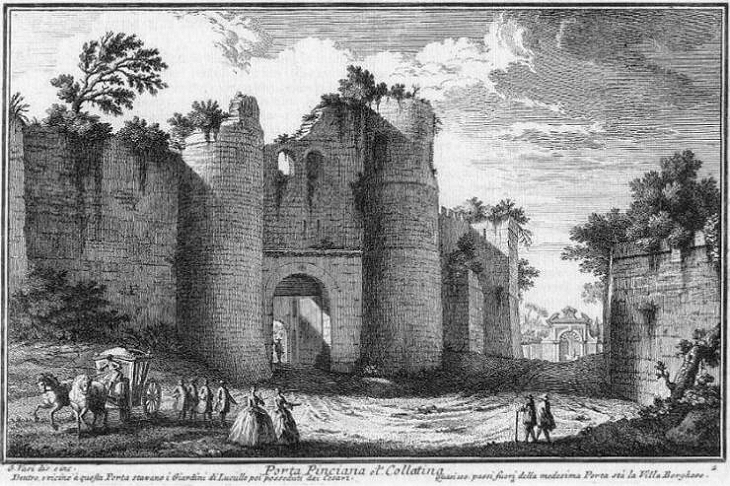 In 1747, when Giuseppe Vasi published this etching, Porta Pinciana, one of the minor gates of Rome, was kept open only to allow access to Villa Borghese and some other suburban villas. In 1808, after the Borghese had enlarged their property by buying neighbouring estates, a new entrance to their villa was opened near Porta del Popolo and Porta Pinciana was closed.
The ancient Romans called this area Collis Hortulorum (Garden Hill) with reference to its many horti, large houses surrounded by gardens, e.g. Horti Sallustiani; the gate and the hill were named after a mansion belonging to the Pincii family in the IVth century AD (you may wish to see a Renaissance imaginary reconstruction of the area - it opens in another window).
The view is taken from the green dot in the small 1748 map here below: the numbers indicate: 1) Porta Pinciana; 2) (lost) gate of Vigna Ascani, one the estates which were bought by the Borghese; 3) gate of Villa Medici. The dotted line in the small map delineates the border between Rione Campo Marzio (left) and Rione Colonna (right). It runs along Via di Porta Pinciana, at the time the only street leading to the gate. 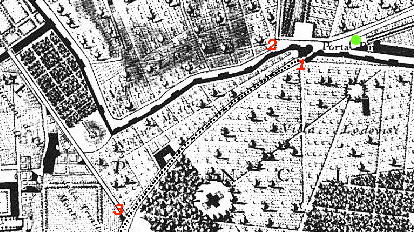 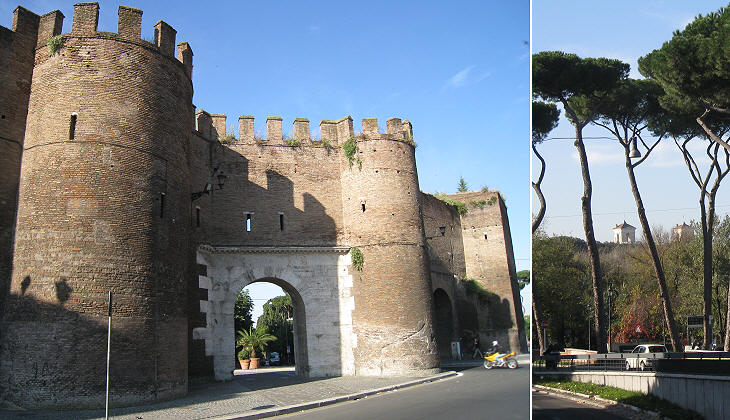 (left) The view in June 2009; (right) the view towards Villa Medici from a terrace outside the gate

The gate is in much better shape today than at Vasi's time. It was reopened in 1887 when a new quarter was developed in the area of former Villa Ludovisi. During the XXth century the opening of large roads along the walls and across Villa Borghese and of underground parking facilities outside Porta Pinciana greatly increased the importance of the gate (the traffic flows through modern openings). Porta Pinciana was the starting point of Salaria Vetus, the old route of Via Salaria which joined the new road (departing from Porta Salaria) near Mausoleo di Lucilio Peto. When Emperor Aurelian built the walls in 275 AD, Porta Pinciana was just a posterula, a small opening; it was enlarged by Emperor Honorius in 402 and strengthened by Belisarius, the Byzantine general who conquered Rome in 536.
The gate was also known as Porta Belisaria, because of a (lost) medieval inscription saying Date obolum Belisario (give alms to Belisarius). According to a medieval legend, Belisarius fell into disgrace and Emperor Justinian ordered him to be blinded and all his possessions to be confiscated; the great general spent his last years as a beggar at Porta Pinciana (you may wish to see a painting by Jacques-Louis David - it opens in another window).

During the IInd century AD the request for highly decorated sarcophagi was so high that they were not made to order, but they were manufactured in workshops near marble quarries and then shipped to resellers in the main cities of the Empire. The portrait of the dead inside a clipeus (round shield) was left unfinished so that it could be retouched to depict the actual person for whom the sarcophagus was bought. A thiasos, a retinue of drunken satyrs and maenads (female followers of Dionysus), was a popular subject for the decoration of sarcophagi. That shown above was decorated with a sea thiasos in which tritons and sea nymphs replaced satyrs and maenads. You may wish to see some thiasos in a page covering the manufacturing of sarcophagi and two very similar ones at S. Grisogono and at Tipasa in Algeria. 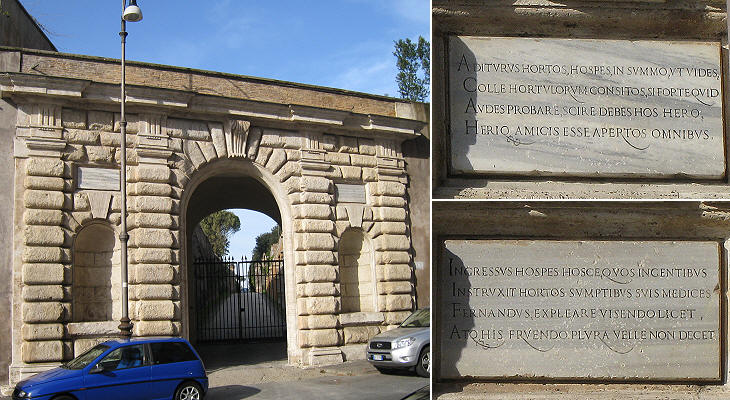 (left) The gate; (right) inscriptions above the niches; they were dictated by Cardinal Ferdinando de' Medici who became Grand Duke of Tuscany in 1587; the following is a rough translation: (above) Guest, now that you have reached these gardens on the summit of "Collis Hortulorum", where you may walk at your pleasure, be aware that the host opens them to all his friends; (below) Guest, now that you are in these gardens, which Ferdinando de Medici ordered with great expense, enjoy their view and rejoice, without desiring anything more

Villa Medici has a very decorated inner façade and a rather plain outer façade. The reason behind it is that when it was built, the villa was accessed through a gate near Porta Pinciana leading to its inner façade. The gate has a typical Florentine appearance with large bugnato stones. 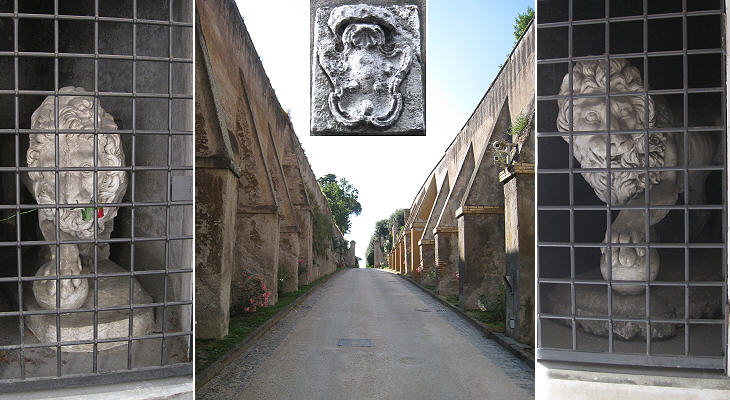 (left and right) Guarding lions in "cages" inside the gate (more about these lions); (centre) alley leading to Villa Medici (see where it ended); (inset) Medici coat of arms on the wall along Via di Porta Pinciana

The Walls between Porta Pinciana and Porta Salaria 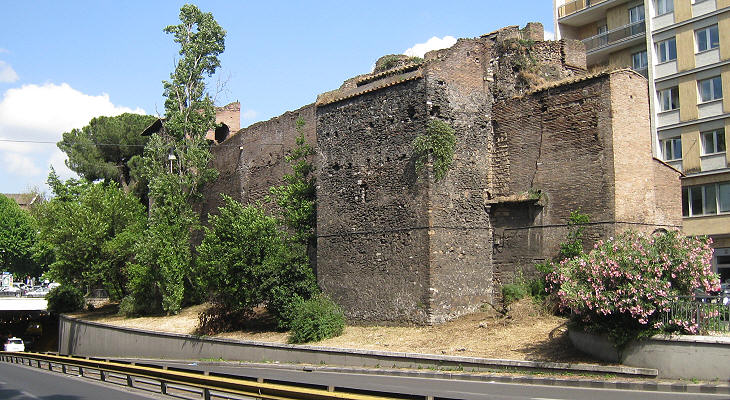 A section of the walls showing towers and ancillary buildings

The 1960 Summer Olympic Games were held in Rome and for the occasion a number of initiatives were taken to reduce traffic congestion. A new road (Viale del Muro Torto/Corso d'Italia) with many underpasses was opened along the northern part of the walls from near Porta del Popolo to Viale del Castro Pretorio. 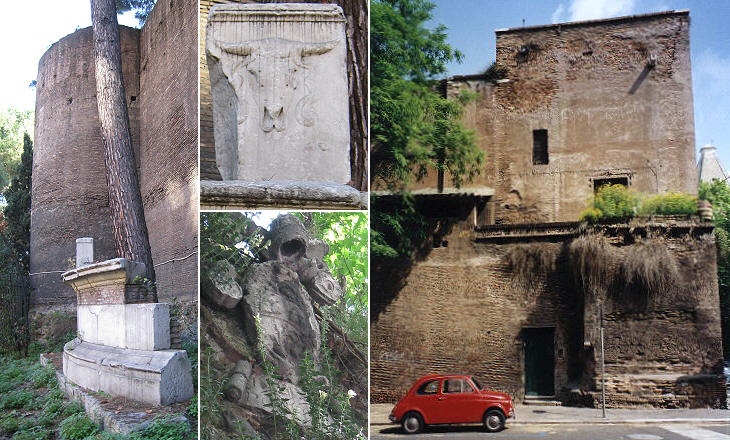 (left) Reassembled tomb; (centre-above) a bucranium from the cornice of the tomb; (centre-below) coat of arms of Pope Julius III on a short section of the walls he restored; (right) a Fiat 500 F, an iconic Italian car of the 1960s (also in the image chosen as background for this page) and a tower which was turned into a house

Excavations for the new road unearthed a small Roman funerary monument which was reassembled between two towers. Some of the towers were modified in order to be used as houses or studios for painters. Parked in front of one of them a red Fiat 500 shines in the sun: in the 1960s this car was the dream of every Italian teenager. Other images of the walls can be seen in the page covering Villa Ludovisi.