Porta Maggiore
(Vasi at work in the Grand View of Rome) 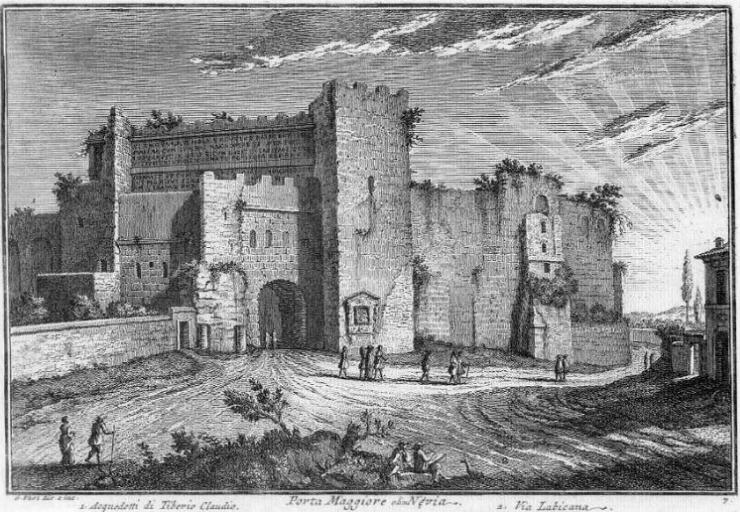 In 52 AD Emperor Claudius built a double monumental arch across Via Prenestina and Via Labicana (today Via Casilina) to celebrate the completion of two aqueducts. The plate shows the fortifications which turned the arch into a well protected gate. The walls built by Emperor Aurelian in 275 reduced the size of the openings of the arch; Emperor Honorius built a new gate in front of the old one in the early Vth century; it was flanked by a high tower and by a smaller one which incorporated a funerary monument.
Maggiore in Italian means greater, but the name given to the gate is not related to its size; it is thought to be a contraction of Porta di S. Maria Maggiore because it allowed direct access to that basilica; others suggest it was a reference to Aula Majoris, a large hall of a nearby palace owned by St. Helena. The gate was also known as Porta di S. Croce because of its proximity to S. Croce in Gerusalemme. Vasi believed that its ancient name was Nevia, but he was wrong. Porta Nevia was a (lost) gate of the Servian walls and it was situated near S. Balbina on the Aventine hill.
The view is taken from the green dot in the small 1748 map here below. In the description below the plate Vasi made reference to: 1) Aqueducts of Claudius; 2) Via Labicana. The small map shows also: 3) Porta Maggiore; 4) Anfiteatro Castrense; 5) Republican tombs in Via Statilia. The green dot happens to be placed almost on the site where in 1917 an underground basilica of the Ist century AD was discovered. 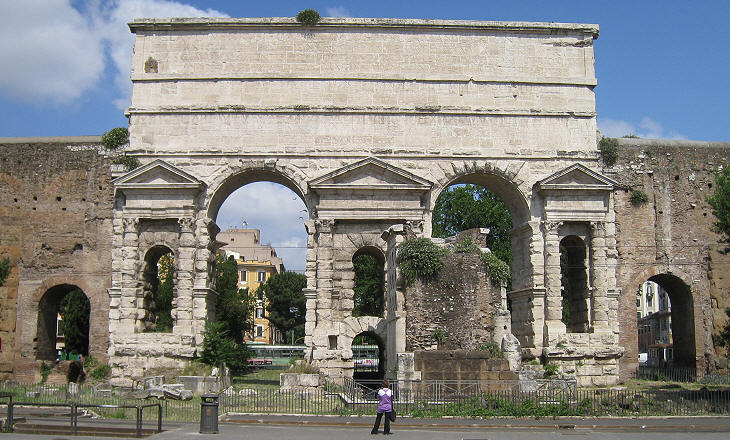 In 1838 Pope Gregory XVI decided to partially free the monumental arch by removing the gate built by Honorius; the remaining fortifications were pulled down after the unification of Italy in 1870. In 1956 the ground was brought back to its original lower level and cars were no longer allowed to go through the gate. 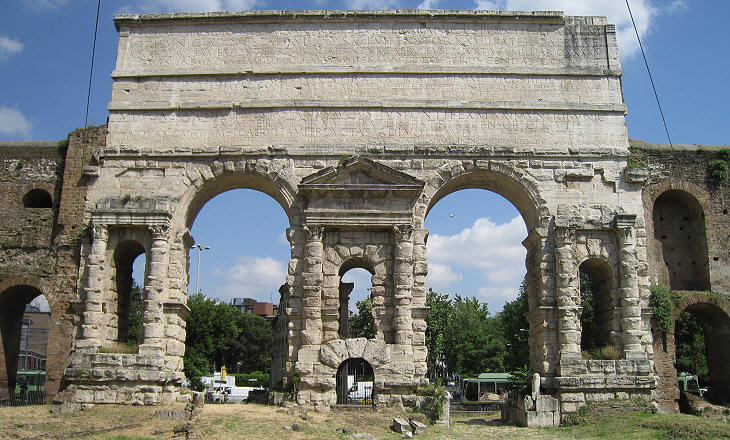 Porta Maggiore seen from the city (the two sides are identical)

Three lengthy inscriptions celebrate the completion of two aqueducts by Emperor Claudius and their restoration by Emperor Vespasian and his son Titus. An interesting aspect of the inscriptions is that they show the growing power of the emperors.
In the first inscription Claudius was described as:
TI. CLAUDIUS DRUSI F. CAESAR AUGUSTUS GERMANICUS PONTIF. MAXIM. TRIBUNICIA POTESTATE XII CO(n)S(ul) V IMPERATOR XXVII PATER PATRIAE ..
his name and the references to his family were followed by Germanicus, a title given to him for war victories, and by a series of "positions" he held in the frame of the republican institutions: pontifex maximus, tribune of the people, consul, imperator and father of the nation; the numbers say how many times a "position" was held. Imperator was just one of Claudius' titles and it was not given a particular evidence.
The inscription for Vespasian starts as follows:
IMP(erator) CAESAR VESPASIANUS AUGUST. followed by the reference to the positions he held.
Finally the inscription for Titus begins with:
IMP(erator) T(itus). CAESAR DIVI F(ilius) VESPASIANUS.
In these cases the title of imperator was emphasized by being placed at the beginning of the inscription.
Similar (but shorter) inscriptions can be seen on the inner side of Porta Tiburtina. 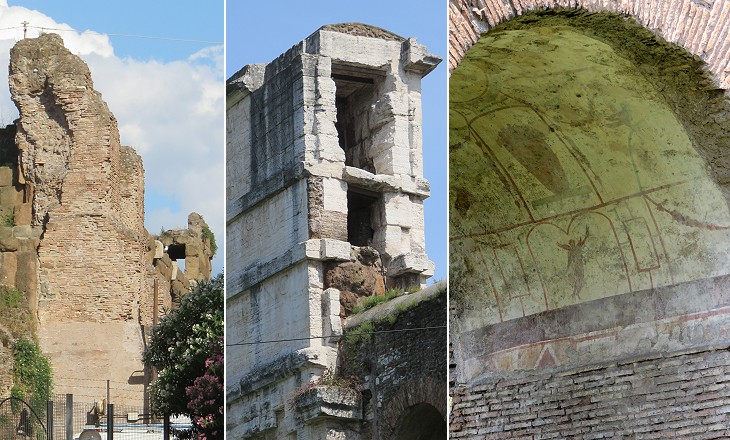 (left) Section of the aqueduct which was incorporated into the walls; (centre) the two conduits: above "Anio Novus" and below "Aqua Claudia"; (right) frescoes in one of the smaller passages

Anio Novus and Aqua Claudia were two aqueducts which carried water from springs near Subiaco in the Apennine Mountains. They joined together some seven miles east of Rome. You can see picturesque images of them in a page describing a walk to Porta Furba. You may wish to walk along Via Prenestina and see some other Roman monuments or follow the steps of German historian Ferdinand Gregorovius who started from here his walks in the Roman countryside or learn more about Roman inscriptions. 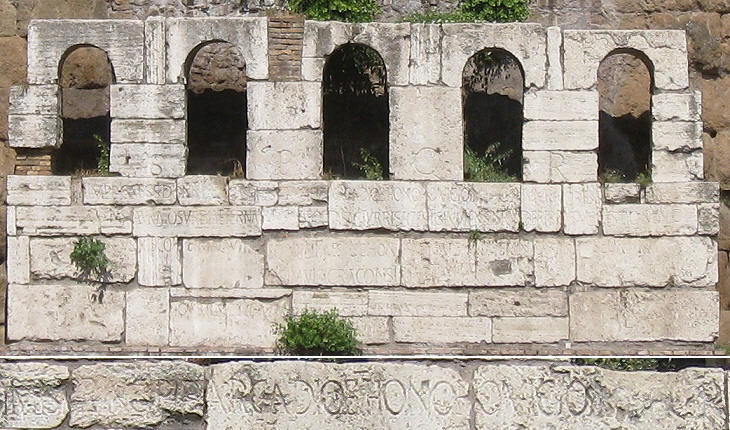 (above) Vth century gate; (below) detail of the inscription with the names of Emperors Arcadius and Honorius

The upper part of the outer gate built by Emperor Honorius was relocated to the left side of Porta Maggiore. Historians set the split of the Roman Empire at the death of Emperor Theodosius in 395. His two sons (Arcadius and Honorius) ruled over two separate entities: the Eastern and the Western Roman Empires. The inscriptions on the gates built/restored by Honorius show that in Rome there was not awareness of this split because they make reference to both emperors. 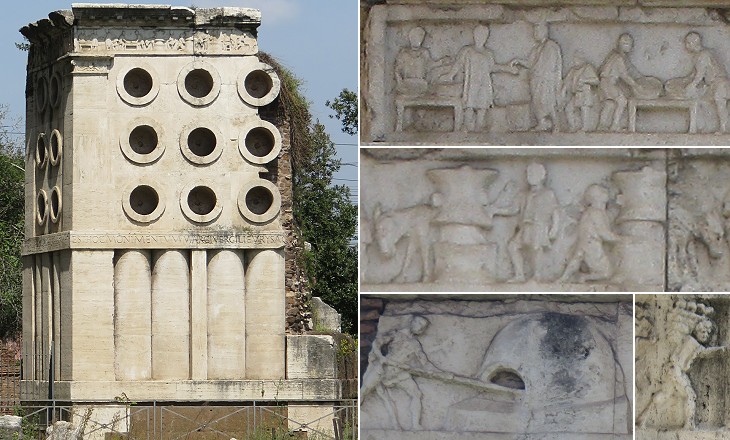 The restoration of Porta Maggiore has isolated an interesting tomb, that of Marcus Virgilius Eurysaces, a freedman, and of his wife Atistia. He was the owner of a bakery; it must have been a large one, because he described himself as a supplier of the state (in Britain he would have claimed to be a "purveyor to HM"). He celebrated his trade by decorating his tomb with reliefs depicting its phases "from manufacturer to consumer". The cylinders and the holes, one of which can be seen in the image used as background for this page, were most likely a reference to standard measures/containers for grain (see one at Pompeii). 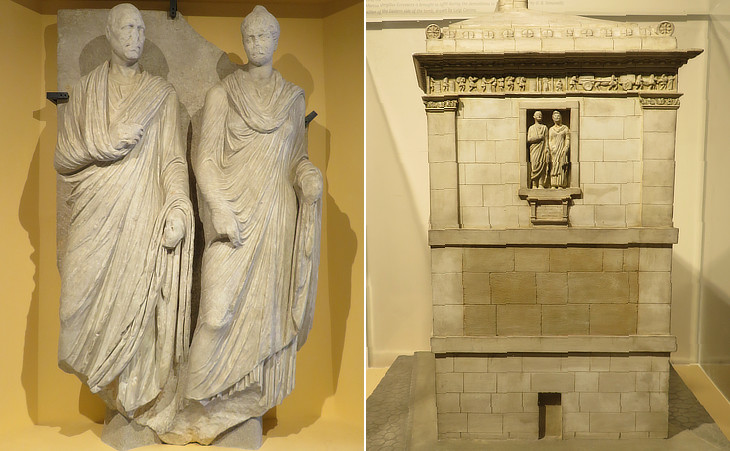 (left) Centrale Montemartini: statues of Eurysaces and his wife; (right) model of the tomb

The statues were meant for a frontal view but the heads have a small angle so that the couple slightly look at each other in a gesture of affection and support. The inscription under the statues indicates that Atistia died before her husband ("Atistia was my wife. She lived as an excellent woman, ...").
You may wish to see a mill/bakery at Ostia or at Pompeii or the funerary monument of another miller at Ostia with reliefs related to his trade. 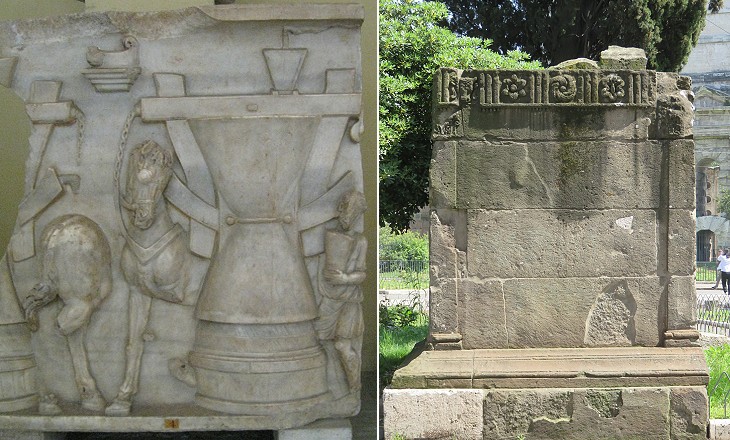 Maybe the area around Porta Maggiore was a sort of "industrial area" of ancient Rome because a sarcophagus found there was decorated with a grinding machine activated by a horse. The tombs in the proximity of Porta Maggiore were most likely all built before the construction of the aqueducts.

Museo Nazionale Romano: IInd century AD sarcophagus which was found near Porta Maggiore; it depicts scenes from the myth of Medea and in particular her cruel vengeance on Creusa, for whom Jason had deserted her: the sending of poisoned gifts to Creusa; the madness and death of Creusa in front of her father Creon, king of Corinth; Medea about to kill her own two sons (see a fresco from Pompeii); the departure of Medea on a chariot drawn by winged serpents

Creon: You, Medea, scowling with rage against your husband, I order you to leave this land and go into exile, taking your two children with you, and instantly. (..) I am afraid that you will do some deadly harm to my daughter. Many indications of this combine: you are a clever woman and skilled in many evil arts, and you are smarting with the loss of your husband's love. And I hear that you are threatening - such is the report people bring - to harm the bride, her father, and her husband.
(..)
Medea: Now I shall tell you all of my designs. (..) I shall send one of my servants and ask Jason to come to see me. When he arrives (..) I shall ask that the children be allowed to stay, not with the thought that I might leave my children behind on hostile soil for my enemies to insult, but so that I may kill the princess by guile. I shall send them bearing gifts, (bearing them to the bride so as not to be exiled,) a finely-woven gown and a diadem of beaten gold. If she takes this finery and puts it on, she will die a painful death, and likewise anyone who touches her: with such poisons will I smear these gifts. (..) Ah me, I groan at what a deed I must do next. I shall kill my children: there is no one who can rescue them. When I have utterly confounded the whole house of Jason, I shall leave the land, in flight from the murder of my own dear sons, having committed a most unholy deed.
Euripides - Medea - David Kovacs, Ed.

Republican Tombs in Via Statilia 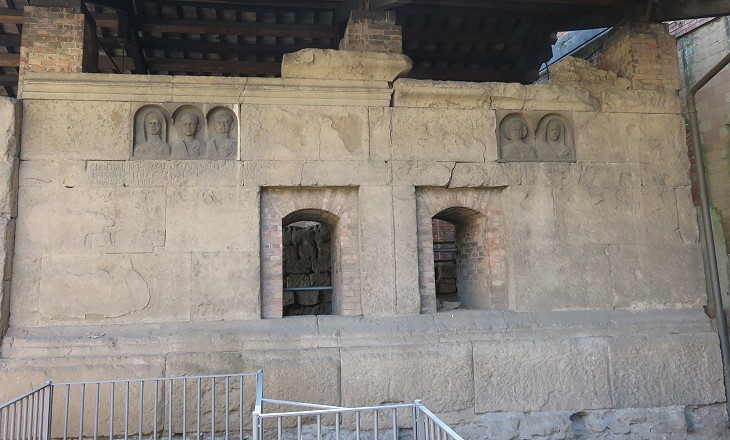 Republican tombs in Via Statilia (thus named after Titus Statilius Taurus, the likely builder of an underground basilica outside Porta Maggiore and the owner of large suburban gardens in the area): Sepolcro Gemino

In 1916 excavations made to enlarge a street found a series of funerary monuments of the late IInd/early Ist centuries BC. They were aligned along Via Caelimontana, a road which led from the Servian walls to Porta Maggiore across the Caelian Hill, so when these tombs were built they complied with the Roman law which prohibited burials inside the city.
Sepolcro Gemino (Twin Mausoleum) is the most interesting of these tombs. It is made up of two identical funerary chambers. We know from the inscriptions that the dead were freedmen of important Roman families, in particular of the Tauri. 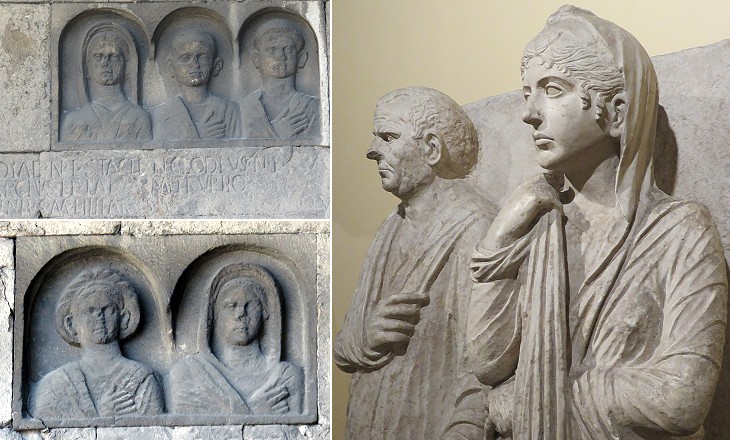 (left) Republican tombs in Via Statilia: Sepolcro Gemino: portraits of the dead; (right) Centrale Montemartini: statues of a couple which were found in Via Statilia (see another famous Roman couple) 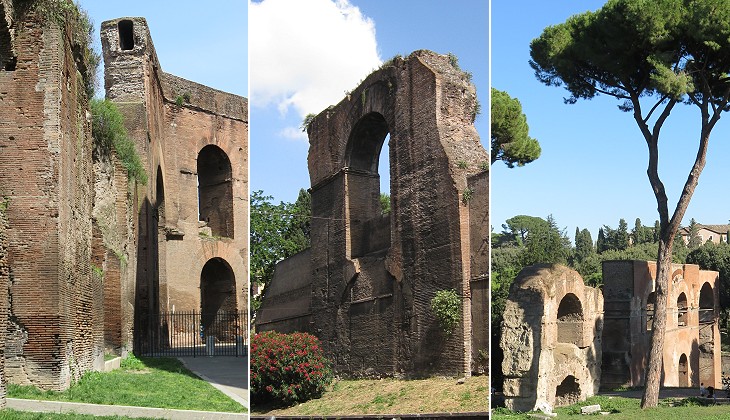 The aqueduct near Porta Maggiore (left), near S. Giovanni in Laterano (centre) and on the Palatine (right)

Emperor Nero built an aqueduct which branched off Aqua Claudia at Porta Maggiore and carried water to his Domus Aurea. It was extended to the Palatine by Emperor Domitian who built there Domus Flavia which had gardens and fountains. It can still be seen at many locations between Porta Maggiore and the Palatine, in particular a long section of the aqueduct can be seen near S. Maria in Domnica.

The Walls between Porta Maggiore and Porta S. Giovanni

Anfiteatro Castrense is the most interesting monument of this part of the walls; it is a IIIrd century oval stadium which was used for training purposes by the Roman army or more likely by the guards of the nearby residence of Emperor Heliogabalus. It was entirely made up of bricks; even the half-columns and their capitals were the result of elaborate masonry, similar to that of some tombs (e.g. that of Annia Regilla). It was incorporated into the walls by Emperor Aurelian and its entrances were closed. Its interior was eventually turned into a kitchen garden by the Cistercian monks of S. Croce in Gerusalemme. 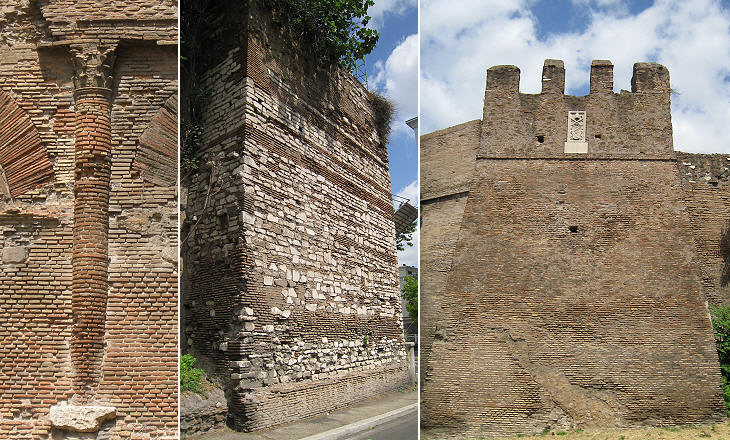 Next plate in Book 1: Porta S. Giovanni.
Next step in Day 2 itinerary: Tempio di Minerva Medica.
Next step in your tour of Rione Monti: Chiesa di S. Croce in Gerusalemme.