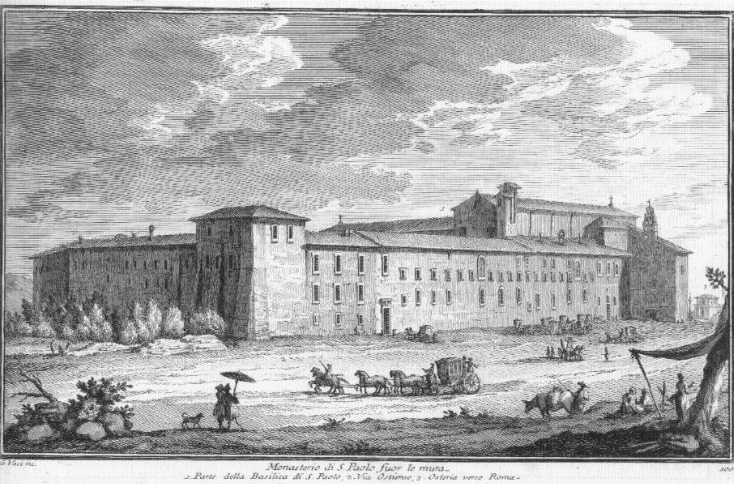 In 1753 Giuseppe Vasi published his third book of etchings showing the monuments of ancient and modern Rome. It covered the basilicas and the most ancient churches. The book did not include S. Paolo fuori le Mura and Vasi explained this omission by saying that the old basilica, one of the Sette Chiese (Seven Churches) which pilgrims were advised to visit, would have been shown in a book covering the monuments along the River Tiber. He had already most of the material for that book ready because in the 1740s he published Vedute di Roma sul Tevere. This plate however was expressly made for that book, the fifth one, which was printed in 1754.
The external appearance of Monastero di S. Paolo fuori le Mura was very similar to that of a fortress. Because of its isolated location at one and a half mile off Porta S. Paolo on the road leading to Ostia and the Tyrrhenian Sea, the monastery was at risk of being raided by Saracens during the Middle Ages and by Ottoman corsairs based in Algiers and Tunis between the XVIth and the early XIXth century. The plate shows that apart from a tavern, there were no other buildings in the proximity of the monastery. This was due to the fact that the area was plagued with malaria. When necessary the monks spent the summer months at Palazzo S. Callisto in Trastevere.
In the description below the plate Vasi made reference to: 1) Part of the Basilica; 2) Via Ostiense; 3) Tavern. The small map (ca 1880) shows 1) Porta S. Paolo; 2) Cappella del SS. Crocifisso; 3) Monastero di S. Paolo fuori le Mura; 4) approximate location of an ancient Roman house. 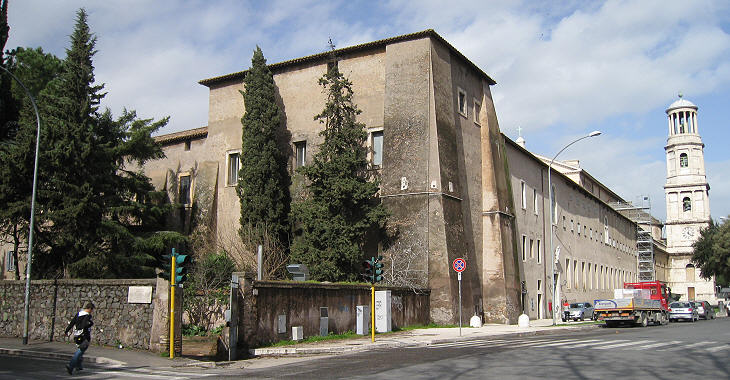 On July 16, 1823 a great fire destroyed almost entirely the basilica, but it did not reach the adjoining monastery which retains its medieval aspect. When the basilica was rebuilt a large bell tower was added to its back (it previously stood to the side of the façade). It was designed by Luigi Poletti and it resembles on purpose a lighthouse. The area opposite the monastery was developed after WWII. 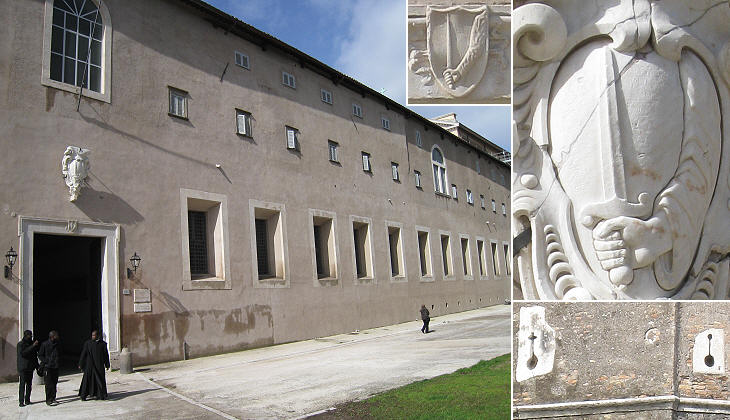 (left) The monastery; (right-above and inset) symbols of St. Paul (another one is shown in the image used as background for this page); (right-below) embrasures in the southern tower

The history of the monastery is distinct from that of the basilica; the oldest record mentions the existence of a nunnery dedicated to St. Stephen and of a monastery dedicated to St. Caesarius. In the VIIIth century Pope Gregory II unified the two institutions and assigned them to the Benedictines; he is regarded as the founder of the monastery. In 846 the Saracens sacked S. Paolo and the monastery; Pope John VIII (872-882) promoted the construction of Giovannipoli, a fortified burg which included the monastery and the basilica.
In 936 St. Odo of Cluny reformed the organization of the monastery, which had known a long period of decadence, by introducing a strict compliance with the rule of St. Benedict. 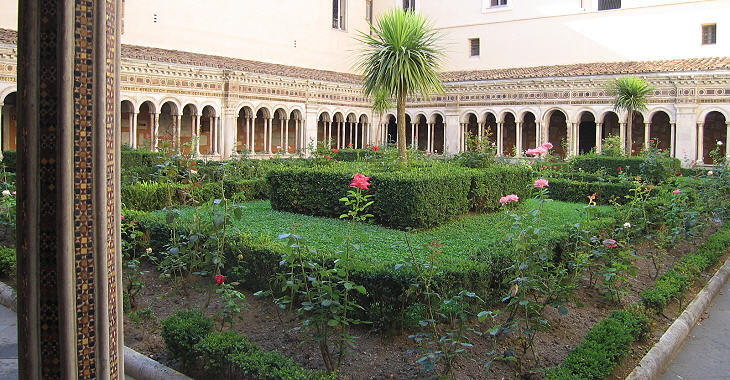 The well-known lovely cloister with its coupled shafts and mosaic inlays was begun in 1193 and finished before 1211. With its round arches, and its semi-classic capitals and bases it may with some justice be claimed as a Romanesque work, though its delicate proportions and the Cosmatesque mosaics belong rather to the succeeding style.
Thomas Graham Jackson - Byzantine and Romanesque Architecture - 1913
In the XIth century the popes assigned extensive properties in the Papal State (e.g. Civitella San Paolo) to the monastery; during the pontificate of Pope Innocent III the monastery was embellished with a very fine cloister, which is regarded as a masterpiece of what some art historians describe as the Early Roman Renaissance, a flourishing of the arts at the beginning of the XIIIth century which preceded Italian Renaissance by two centuries. 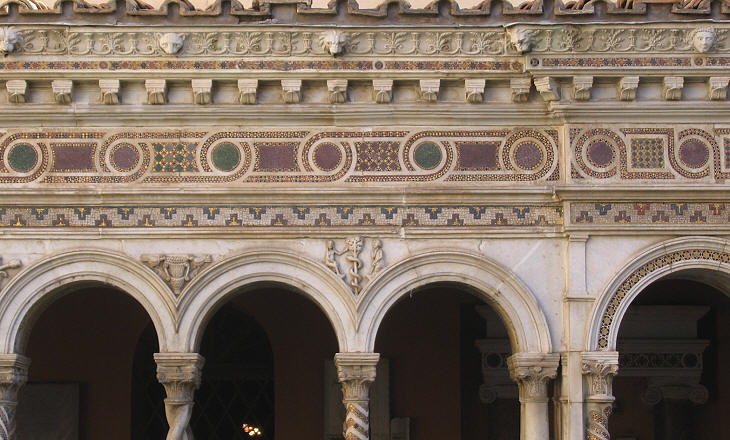 Detail of the decoration of the northern side of the cloister

Vassalletto and Cosma were two families of Roman marmorari (marble masters) whose works are generally defined as Cosmati. The Vassalletto were involved in the design of the cloister which was completed by 1214; its northern side shows a more elaborate decoration than the other ones; it is not limited to the geometric mosaics, for which Vassalletto and Cosma are best known, but it includes reliefs (such as that portraying Adam and Eve) and a cornice which follows ancient models, e.g. the cornice of Tempio di Adriano. 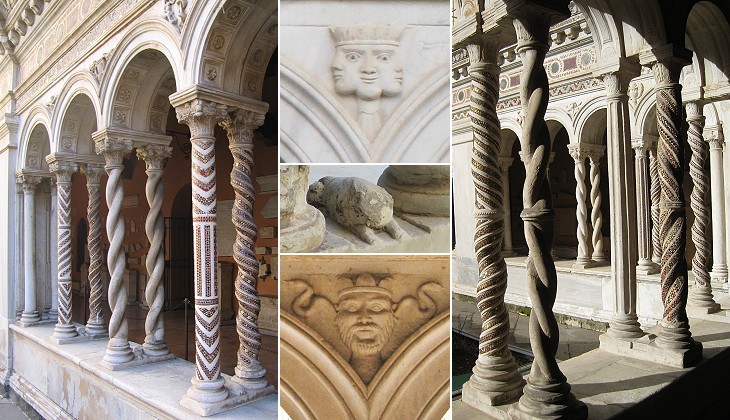 In general we are more familiar with the myths of the Ancient World and their iconographic representation, than with those of the Middle Ages; many of the symbols and scenes depicted by the Vassalletto are of difficult interpretation, but they certainly meant something to their contemporaries.
A detail which identifies the works by Vassalletto is the (unexplained) presence of small sphinxes between the pairs of columns. It can be observed also in the cloister of S. Giovanni in Laterano, which they decorated in a very similar way. You may wish to see the glass inlaid columns of the Cloister of Monreale in Sicily. 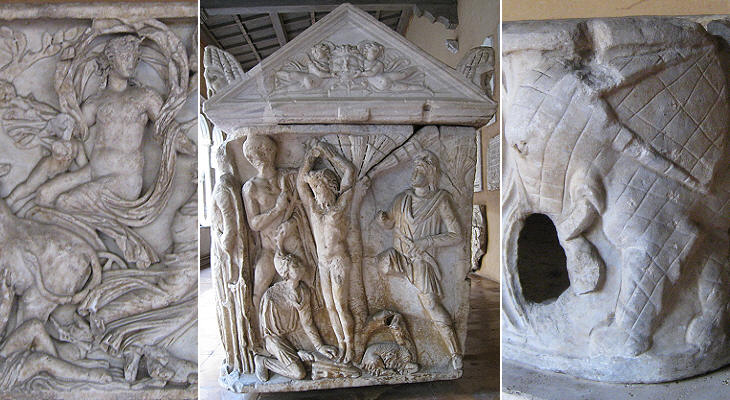 Details of sarcophagi: the central one portrays the punishment of Marsyas and it was reutilized as the tomb of Pietro di Leone, after whom the Pierleoni family was named. Marsyas was a satyr who was flayed alive for having challenged Apollo to a contest of music

In antiquity Via Ostiense was flanked by funerary monuments and graveyards and the basilica and the monastery were built above a complex of cemeteries; the cloister houses a series of sarcophagi found in the area, some of which were reutilized during the Middle Ages or the Early Renaissance.

(above) Fragment of an ancient sarcophagus reutilized for Cardinal Theobald, Bishop of Ostia and former Abbot of Cluny (d. 1188) depicting episodes of the life of Jonah; (below) other fragments of sarcophagi. You may wish to see another interesting sarcophagus portraying Achilles in the arms of Chiron, a centaur 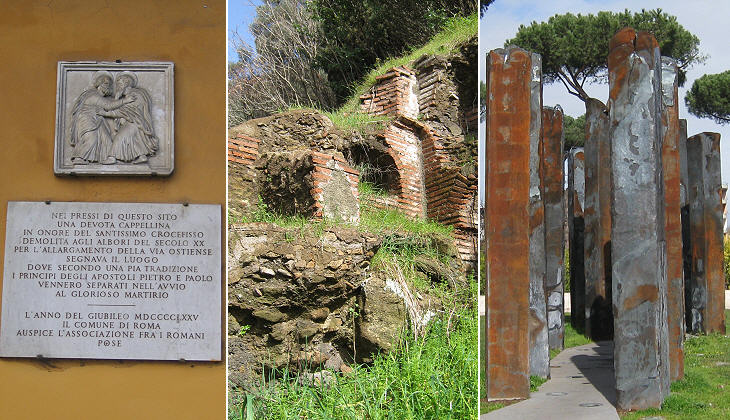 (left) Modern plaque indicating the site of Cappella del SS. Crocifisso along Via Ostiense; (centre) Sepolcreto Ostiense, detail of a "columbarium"; (right) "Foresta d'Acciaio" (Steel Forest), monument near Sepolcreto Ostiense to 19 Italian soldiers who fell at Nassiriya in Iraq in 2003 by Giuseppe Spagnulo and Lucio Agazzi

In the way I took notice of a little Chappel on the Left hand, where St. Peter and St. Paul took leave of one another, before they were led to Martyrdom.
Richard Lassels' The Voyage of Italy, or a Compleat Journey through Italy in ca 1668
For some centuries a covered passageway sheltered the pilgrims from Porta S. Paolo to the basilica; the latest records describing this long portico date from the XIIth century; according to tradition at approximately midway between the gate and the basilica St. Peter and St. Paul met for the last time before being carried to the sites of their martyrdoms. A small chapel having on its façade a relief showing the two saints was demolished at the beginning of the XXth century when Via Ostiense was enlarged.
Sections of the cemeteries near the basilica were unearthed in the 1920s; they include family tombs and many columbaria, series of small niches which housed cinerary urns and which resemble dovecotes (Engl. dove = Lat. columba). In 2007 it was felt appropriate to build near these ancient tombs a monument to Italian soldiers who fell at Nassiriya in Iraq. 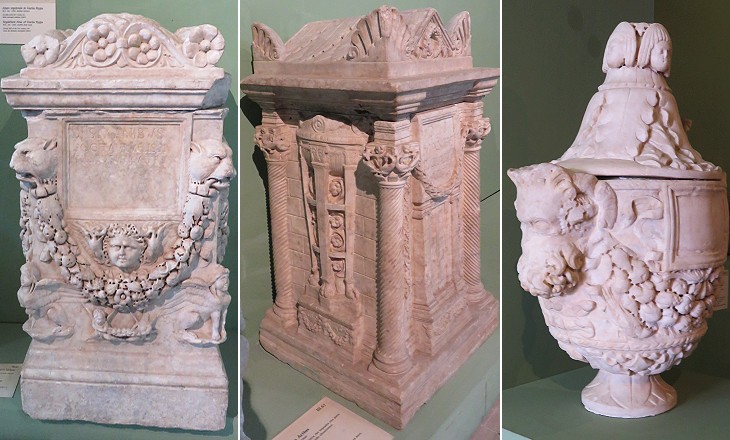 A selection of the small altars and cinerary urns found at Sepolcreto Ostiense are on display at nearby Centrale Montemartini, a museum of the City of Rome along Via Ostiense. The finest pieces are dated Ist and IInd century AD. 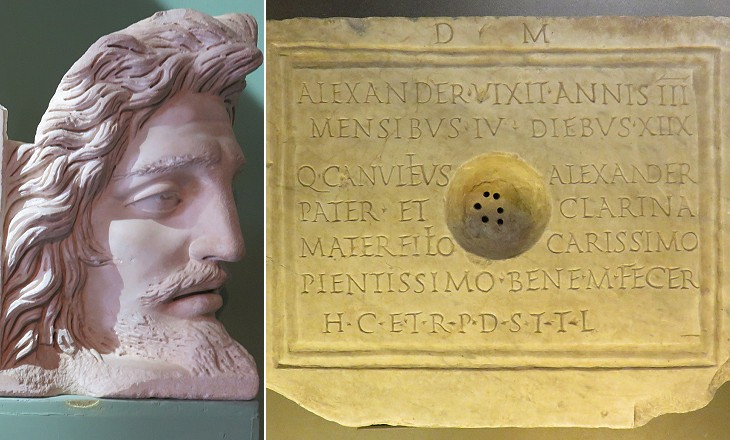 The tiny holes of the funerary table were used for profusiones, pouring in of wine or milk or pieces of cakes in honour of the dead who in this case was Alexander, a child aged three years, four months and eighteen days. The final part of the long acronym (T R P D S T T L) stands for Te Rogo Praeteriens Dicas Sit Tibi Terra Levis (I ask you in passing to say: May the earth lie lightly on you!).
The invitation to interact with the deceased was extended not only to surviving friends and family, but also, and even primarily, to people who had never known him/her while they were alive as in an inscription of a jeweller along Via Appia. 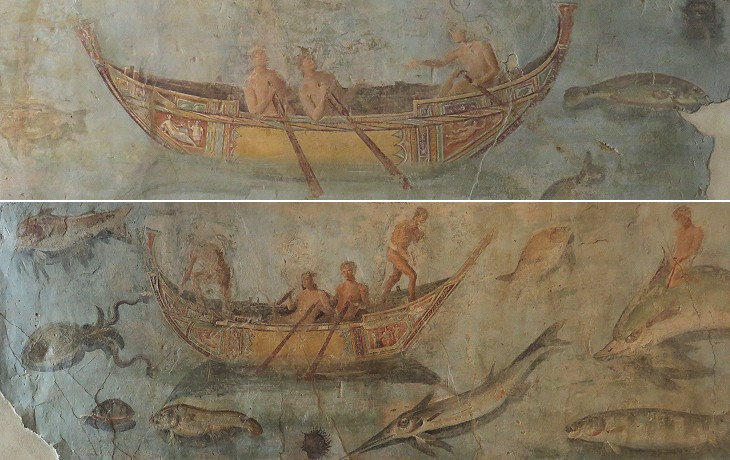 In 1915 walls of an ancient Roman house were detected in the area opposite the monastery on the other side of the river. In 1939-1941 an excavation campaign led to uncovering some carefully painted small rooms. One in particular had an elaborate fresco decoration depicting sea creatures and fishermen (a popular subject, especially for floor mosaics). Their boats were in turn decorated with small paintings. The image of one of the boats is reflected in the water. The stamped brands of the bricks indicate that the room was built in 123 AD.