SS. Venanzio e Ansovino
(Vasi at work in the Grand View of Rome)

Links to this page can be found in Book 6, Day 1, View C8, Rione Campitelli and Rione Sant'Angelo. 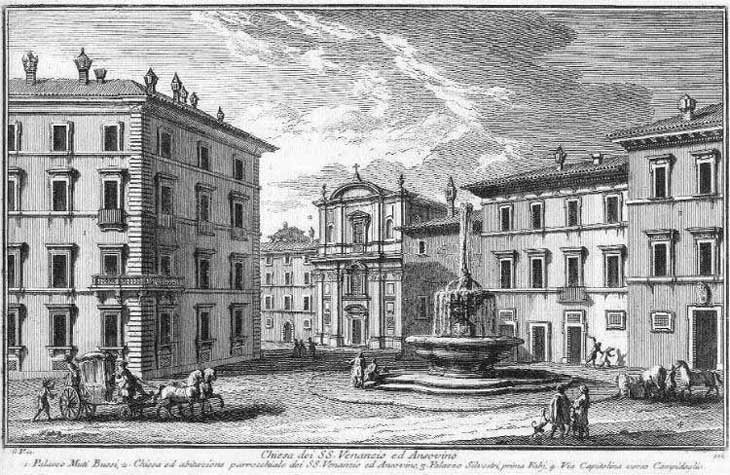 Le Magnificenze di Roma Antica e Moderna is the overall title Giuseppe Vasi gave to his ten books of etchings which showed the monuments of Rome. In the first five books he covered nearly all the most interesting sites of the Eternal City. These sites however were depicted by other etchers and painters too. The plates of Book 6, which was published in 1756 and deals with the parish churches, are often the only XVIIIth century views we have of minor buildings and hidden corners of Rome, some of which do not exist any longer.
In the foreground of this etching Vasi showed a luxury coach on its way from il Gesù to Palazzi del Campidoglio and he did not pay much attention to the parish church which was the subject of the plate.
The view is taken from the green dot in the small 1748 map here below. In the description below the plate Vasi made reference to: 1) Palazzo Muti Bussi; 2) SS. Venanzio ed Ansovino; 3) Palazzo Silvestri; 4) Via Capitolina leading to Campidoglio. The small map shows also: 5) S. Rita da Cascia; 6) Casa di Pietro da Cortona; 7) Tor Margana; 8) Palazzo Fani; 9) Palazzo Massimo. The dotted line in the small map delineates the border between Rione Sant'Angelo (upper left corner) and Rione Campitelli.

The church and the adjoining buildings (including Palazzo Silvestri) were demolished in 1928 to make room for a large square surrounding Monumento a Vittorio Emanuele II and for the opening of Via del Mare, a new road linking the city centre with the southern part of Rome and eventually with Lido di Ostia, its modern beach.
The pulling down of the neighbourhood had a higher than expected cost, because many landlords claimed that the compensation they received for their expropriated properties was unfair. Eventually Governatorato di Roma, the body which in 1926 replaced the Municipality of Rome and which directly reported to the Prime Minister, had to agree on higher reimbursements.

(left) Aerial view of the area before the 1920/1930s changes: the red border surrounds the buildings which were pulled down; the green asterisk indicates Palazzo Muti Bussi; (right) view from Piazza del Campidoglio which shows the effect of demolitions

SS. Venanzio and Ansovino was a small medieval church which was redesigned by Giovanni Battista Contini in the late XVIIth century when the church was assigned to the community of inhabitants of Camerino, a town in the Marches region, who lived in Rome (you may wish to see the very interesting church of S. Venanzio at Camerino). S. Rita da Cascia, another small church which was demolished at the same time as SS. Venanzio and Ansovino, was rebuilt near Teatro di Marcello. The lost houses of painters Pietro da Cortona and Giulio Romano were situated near S. Rita da Cascia. 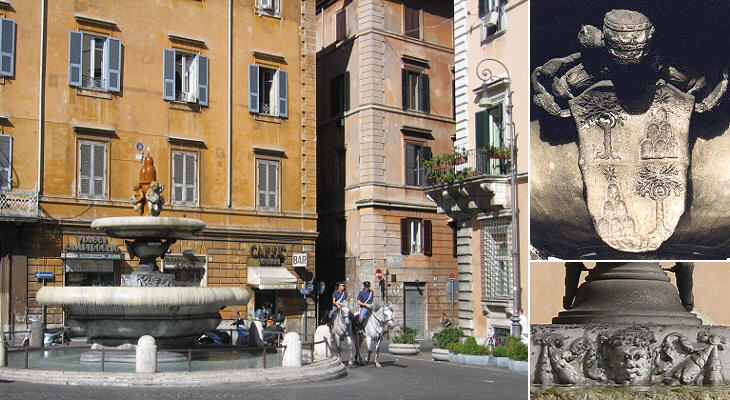 (left) The fountain; (right-above) coat of arms of Pope Alexander VII; (right-below) detail of the decoration

The fountain was built in 1589 by Giacomo della Porta as part of a large plan for the distribution of the water of Acqua Felice, an aqueduct built by Pope Sixtus V. The three mountains at the top of the fountain which are shown in the image used as background for this page are a reference to the heraldic symbol of that pope. Two coats of arms of Pope Alexander VII celebrate a restoration of the fountain. 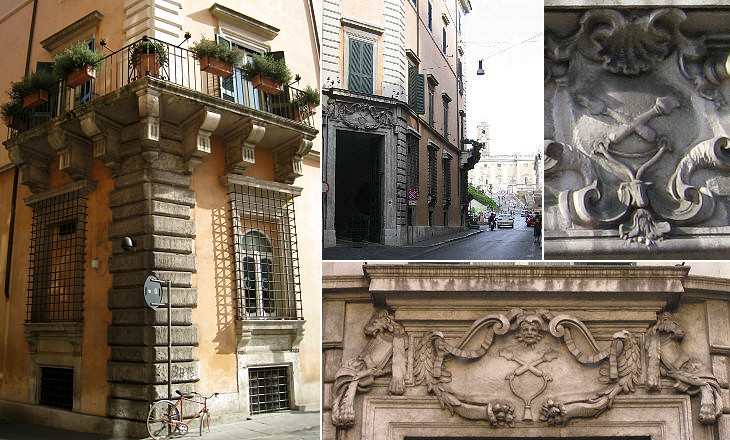 (left) The corner with the balcony shown in the etching; (right) various details of the portals

The Muti family claimed to descend from Mutius Scaevola, so when Cecilia Muti, the last of the family, married Giulio Bussi in 1615, her father insisted that Muti be added to Bussi (because of its greater lustre Muti was named first).
Palazzo Muti Bussi is a late XVIIth century work by Giovanni Antonio De' Rossi. The portals are decorated with the heraldic symbols of the Muti, in particular a couple of maces (clubs with a metal head and spikes); these are called mazze in Italian and they were therefore a reference to Mutius Scaevola.
You may wish to see the fine monuments to Giovanni Andrea Giuseppe Muti and his wife Maria Colomba Vincentini in the church of S. Marcello (or a Bussi coat of arms in my Hall of Fame page).
Other branches of the Muti family had palaces in Piazza SS. Apostoli and Piazza della Pilotta. Lorenzo Bussi, Bishop of Carpentras, decorated the apse of the Cathedral of the town in a very Roman fashion. 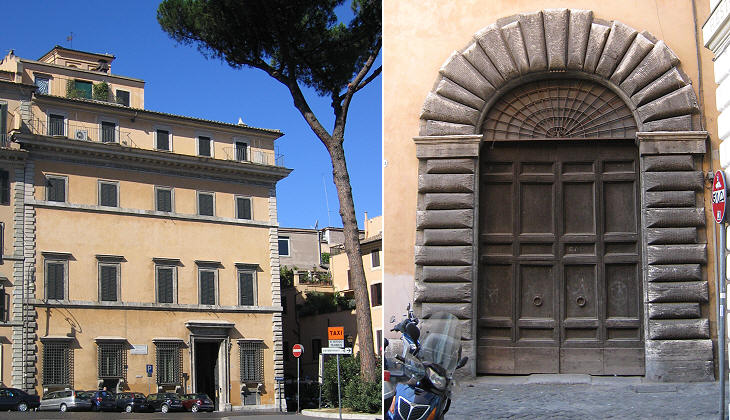 The palace is now usually called Palazzo Pecci Blunt after its current owners, the heirs of Anna Laetitia Pecci, a niece of Pope Leo XIII, and Cecil Blumenthal, a rich American banker. It belonged to many Roman families including the Ruspoli and the Spada. However it is during the Fani family ownership at the end of the XVIth century that the building was redesigned by Giacomo della Porta. It has a fine loggia. 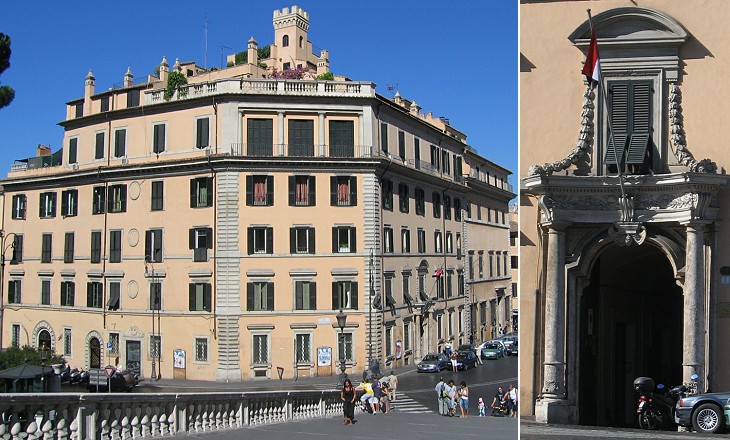 (left) Palazzo Massimo seen from the steps leading to Piazza del Campidoglio; (right) main portal (the flag is that of the Republic of Syria, because the palace housed its embassy until 2013)

In 1939 the eastern corner of the building was cut to enlarge the street. As a result the balcony at the attic level enjoys a terrific view over the twin steps leading to Piazza del Campidoglio and to S. Maria d'Aracoeli. The little tower on the roof terrace is a XIXth century addition. Apart from these changes the palace retains the appearance it was given in 1695 when Carlo Fontana redesigned it. The elegant portal became a model for the architects of the XVIIIth century. 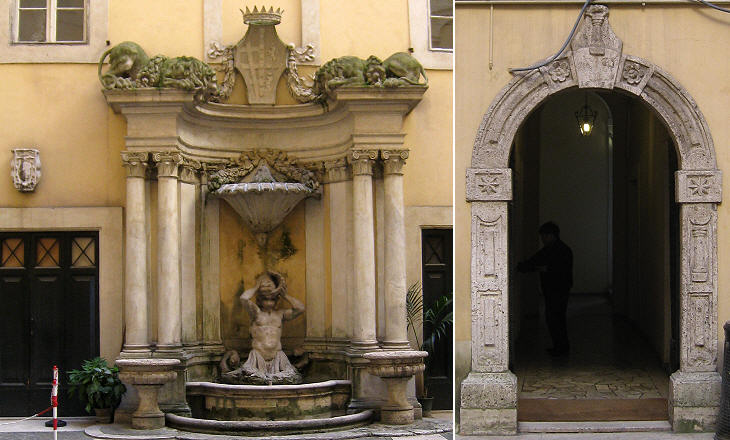 (left) Fountain in the courtyard (see other fountains in courtyards) with the coat of arms of the Massimo and resembling Fontana del Tritone; (right) inner portal with the heraldic symbol of the Colonna family 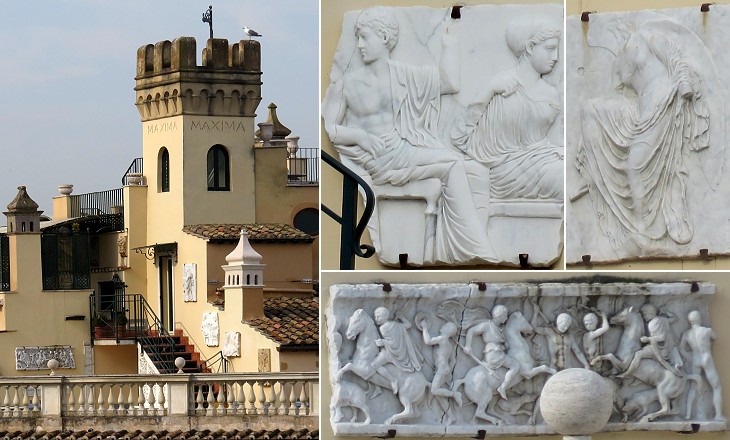 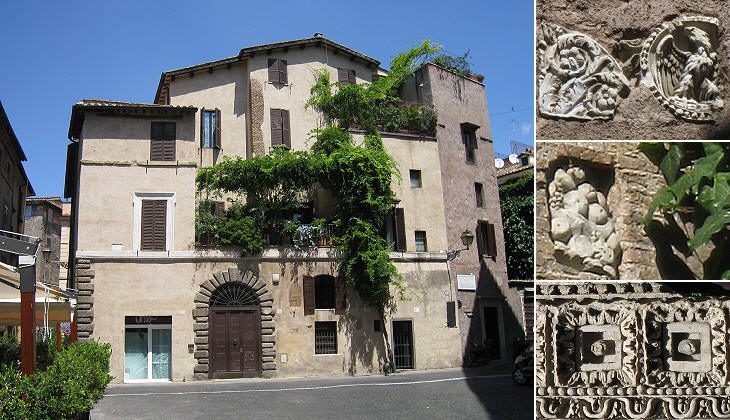 View of the complex of buildings which include Tor Margana; (right) reliefs on the walls of Tor Margana

In the XVth century the Margani were often involved in fights with other Roman families. The chronicles of the time report a Paolo Margano killing a Bartolomeo Santacroce in 1446 and another Paolo Margano killing a Prospero Santacroce in 1485. The Santacroce lived very near in their fortified palace and the two families were fierce enemies. The Margani had a fortified house too, which they embellished with true and fake fragments of Roman buildings. Today Piazza di Tor Margana is a quiet and picturesque square in the very centre of Rome.