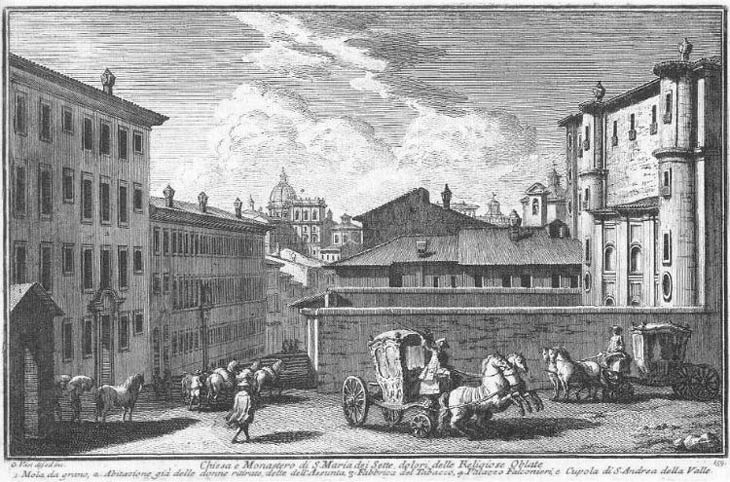 The beginning of the Industrial Revolution is generally set in Great Britain during the second half of the XVIIIth century; news of the development of new manufacturing techniques involving a greater use of machinery reached Rome where attempts were made to develop some modern factories; the area around S. Maria dei Sette Dolori was chosen because it stood immediately below the arrival point of Acqua Paola, an aqueduct built by Pope Paul V in 1612, and the fall of the water could be exploited as a source of energy.
In this 1759 etching Giuseppe Vasi showed a tobacco factory and workers and horses carrying sacks of flour from a mill. He showed also a partial view of Rome from the uphill street leading to S. Pietro in Montorio.
The view is taken from the green dot in the 1748 small map below. In the description below the plate Vasi made reference to: 1) Mill; 2) Conservatorio dell'Assunta; 3) Tobacco factory; 4) Palazzo Falconieri and Dome of S. Andrea della Valle. These last two monuments are covered in other pages and are not included in the map which shows also: 4) S. Maria dei Sette Dolori; 5) Accademia degli Arcadi; 6) Cartiera Sampieri; 7) Acqua Paola; 8) Piazza delle Fornaci. 7) is covered in another page. 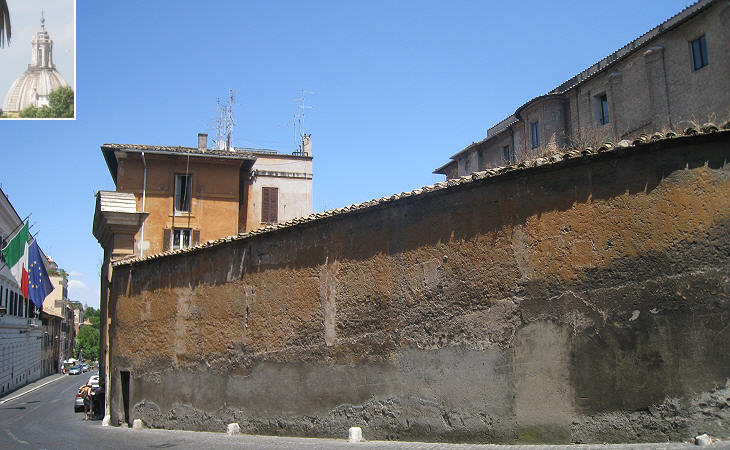 The high wall which surrounds S. Maria dei Sette Dolori has most likely the same height it had at Vasi's time; the small manufacturing district opposite the nunnery did not survive for a long time and all its buildings were eventually used for other purposes; the loggia of Palazzo Falconieri is hidden by trees, whereas with some effort a dome is visible, but it is the dome of S. Agnese in Agone, rather than that of S. Andrea della Valle as indicated by Vasi. 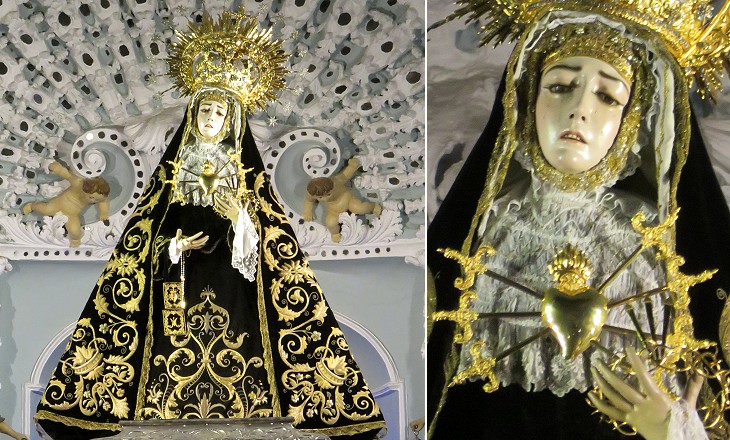 A typical depiction of S. Maria dei Sette Dolori (Our Lady of Sorrows) with seven daggers piercing her heart (at Cordoba, Spain)

"Sette Dolori" is a reference to seven sorrowful events in the life of the Virgin Mary. The dramatic portrayal of the Seven Sorrows did not correspond to a particularly severe lifestyle in this nunnery:
The present Occupants, who make annual engagements, and are not bound to strict enclosure, being one of the least austere of the female monastic Orders. (..) The sisters receive young ladies as boarders, whom they educate for the world.
Rev. Jeremiah Donovan - Ancient and Modern Rome - 1844 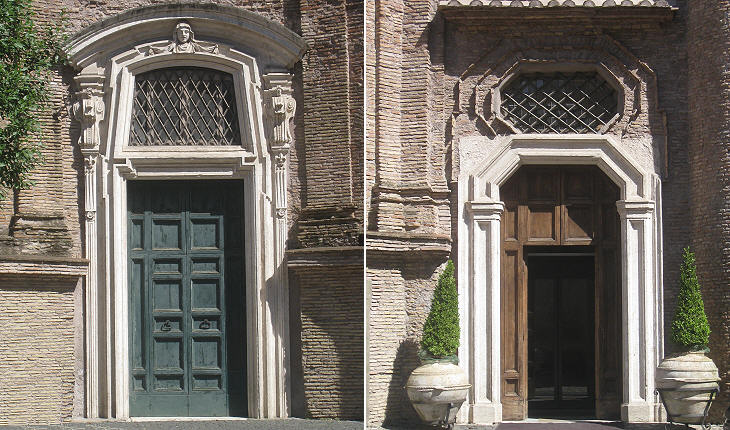 (left) Entrance to the church (the decoration includes two fleurs-de-lis, the heraldic symbol of the Farnese, one of which is shown in the image used as background for this page); (right) entrance to the nunnery

The construction of the Augustinian nunnery and of the church began in 1642 at the initiative of Donna Camilla Virginia Savelli, wife of Pietro Farnese, Duke of Latera, a small town which was part of the Duchy of Castro in northern Latium. The Farnese at that time were a very powerful family and to protect their possessions they did not hesitate to wage war on the Papal State in order to force Pope Urban VIII to acknowledge their rights. In 1649 however they lost the Duchy of Castro and they eventually sold Latera. This explains why the completion of S. Maria dei Sette Dolori was delayed several times and the façade of the nunnery was left unfinished. Francesco Borromini designed the unusual façade of the nunnery which is characterized by concave and convex lines. He clearly had in mind a curved wall of Villa Adriana which projects from a flat one; he showed his knowledge of ancient Roman construction techniques also in the use of small flat bricks for decorative purposes, something he did also at Oratorio dei Filippini. 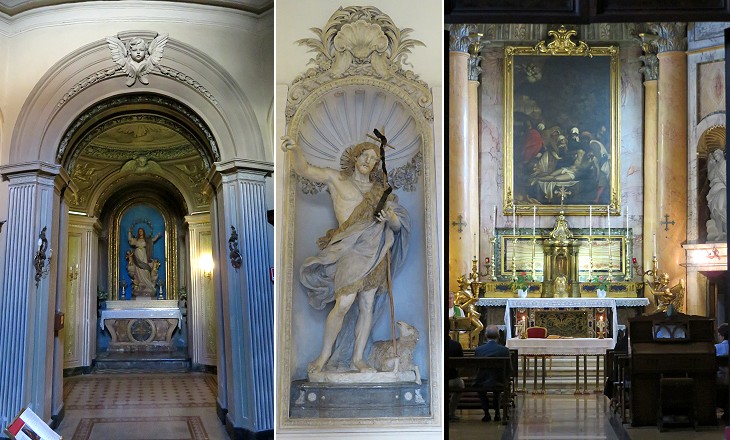 The orientation of the church is parallel to the façade of the nunnery, an arrangement which Borromini used also for Cappella dei Re Magi inside Palazzo di Propaganda Fide. Notwithstanding the portal in the façade, the church is meant to be accessed from the nunnery. Its decoration was completed after the architect's death in 1667 and some changes were made to its original design.
Today a large part of the nunnery houses a luxury hotel. 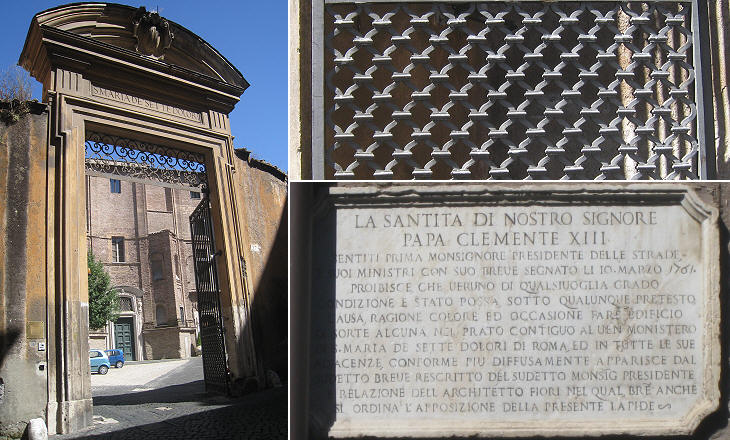 (left) Portal; (right-above) design of the lower part of the gate (probably by Borromini and very similar to that of Ponte S. Angelo by Gian Lorenzo Bernini); (right-below) inscription on the external wall containing a decree by Pope Clement XIII stating that the area near the nunnery should stay free of buildings 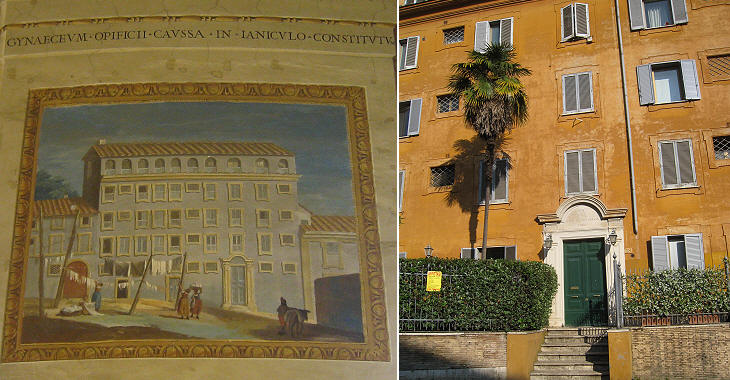 (left) Fresco in Museo Pio-Clementino celebrating the transformation of Conservatorio dell'Assunta into a factory by Pope Pius VI; (right) the building today

Conservatorio dell'Assunta was built in ca. 1740 by Pope Benedict XIV; it was one of the many institutions of Trastevere which cared for unmarried women; in 1777 the building was modified and turned into a factory where women worked at the production of linen clothes; the fresco is very interesting because it shows the original colours of the building which was repainted using a uniform ochre tint during the XIXth century (you may wish to learn more on this topic). 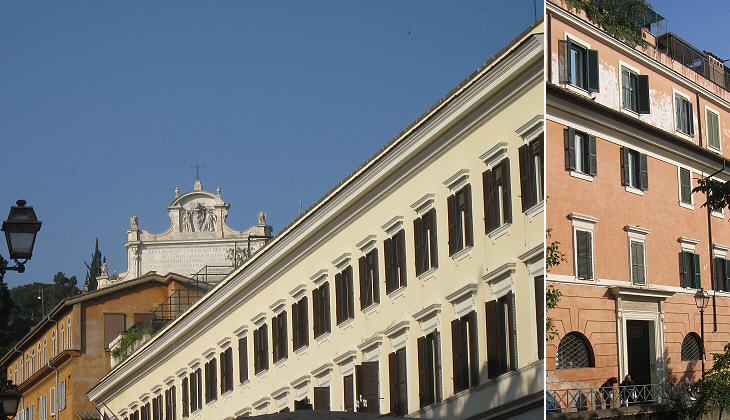 The name of the street which was wide enough to be classified as a square, indicates that there were kilns (It. fornace) in the area, probably before the construction of large kilns at Porta Fabrica, outside the walls. The tobacco factory was built in 1742 and in 1775 it was turned into a linen factory in order to employ young women; the factory was later on enlarged with the acquisition of Conservatorio dell'Assunta; in 1792 the production was changed and woollen clothes were manufactured; in 1888 the building was turned into a large Carabinieri barracks. The tobacco factory was moved to other locations and eventually in 1863 to a new large building near S. Grisogono. At the beginning of the road, near Porta Settimiana, Pope Pius VI built a new house for Conservatorio delle Pericolanti, a charitable institution previously located in Palazzo Leoni, which also cared for young women; they worked at a small silk factory inside the building.
These attempts of combining charities with enterprises did not yield great results and the Papal State was never able to develop an efficient industrial structure.
Today Piazza delle Fornaci is named Via Giuseppe Garibaldi after the Italian national hero who fought in 1849 for the defence of the Roman Republic. 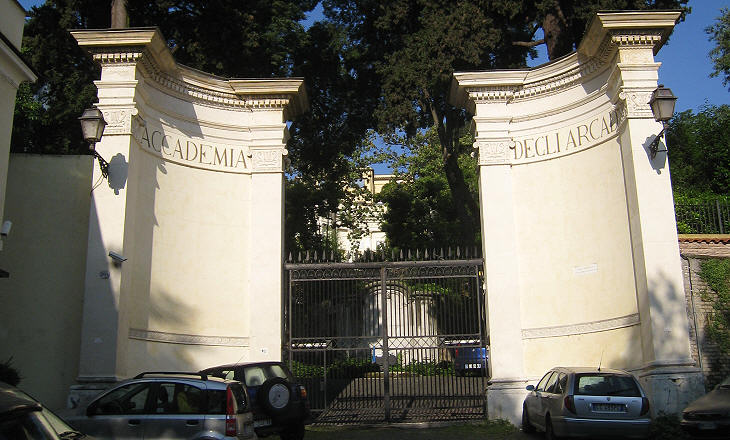 Accademia degli Arcadi was founded in 1690 to preach simplicity in poetry and for this reason it was named after Arcadia, a mountainous region of Peloponnese, Greece, which Virgil established as an ideal location for poetry in the Eclogues; the members of the academy who included some women used to meet in gardens which they called Bosco Parrasio (Parrasian Grove), after a mythical site of that region. The current name of the institution is Arcadia - Accademia Letteraria Italiana; it is now located with its historical library at Biblioteca Angelica. It had a branch in Trieste. 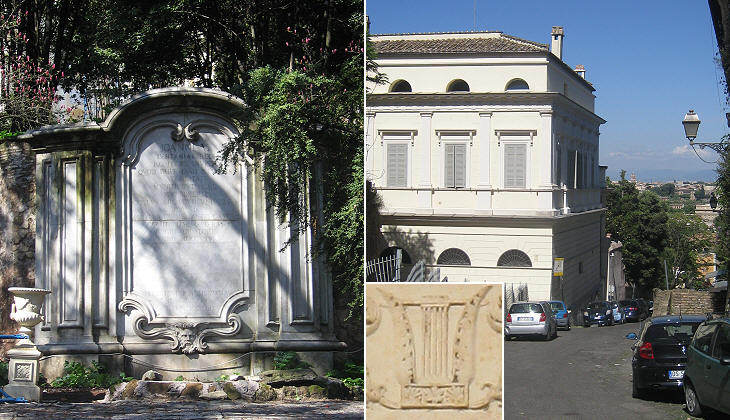 For many years the meetings took place in gardens owned by one of the rich members of the Academy: this until 1724 when King John V of Portugal donated a piece of land next to S. Maria dei Sette Dolori. The king made the donation as part of a public relations effort aimed at being recognized among the most important European monarchs.
As early as the end of last year (..) I was being urged from several sides to allow myself to be received as a notable shepherd into the Arcadia. I resisted for a long time, but had at last to yield to the entreaty of friends, who seemed to set some particular store by this affair. (..) The ceremony itself proceeded in the following manner. (..) The chairman from the pulpit gave a general introductory speech, then called up several persons, who delivered themselves partly in verse, partly in prose. This over, the chairman again began a speech the contents and drift of which I pass over. (..) I was forthwith formally declared one of them, and amid great clapping of hands received into their company.
J. W. Goethe was admitted to the Academy in January 1788 and he described the ceremony in Italian Journey (translation by Charles Nisbeth). His academic name was Megalio Melpomenio which meant Great Tragedian, Melpomene being the Muse of Tragedy. Giuseppe Vasi himself was a proud member (Pastore Arcade - Arcadian Shepherd) of the Academy. You may wish to read Sir Richard Colt Hoare's account of a session of a similar academy at Noto in 1790. You may wish to see the funerary monument of Nicolas Poussin, a French painter in Rome, who dedicated one of his best known paintings to Arcadia. 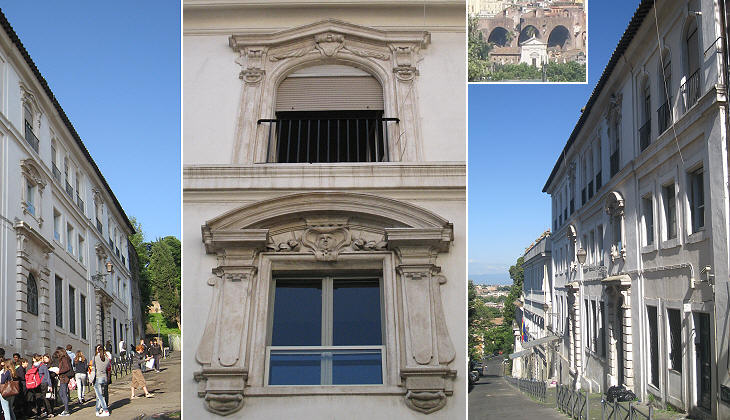 In his 1761 Guide to Rome, Vasi did not give a flattering judgement about the quality of the paper manufactured in the rather elegant factory built by Carlo Melchiorri for Conte Giovan Battista Sampieri. He wrote: .. both the writing and printing papers do not reach a high standard of quality yet, but maybe one day they will reach it. Apparently the papers never reached appropriate quality standards, because the building was later on enlarged and used as a nunnery. Today it houses Instituto Cervantes, the cultural Spanish centre in Rome and it is part of a sort of Spanish block which includes Casino Giraud and S. Pietro in Montorio. Cartiera Sampieri can be seen in Vasi's 1765 Grand View of Rome.