Porta Angelica
(Vasi at work in the Grand View of Rome) 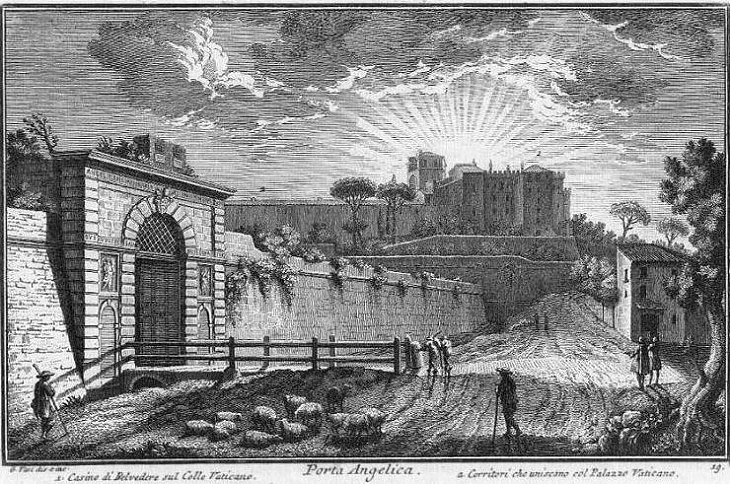 The etchings by Giuseppe Vasi were aimed at accurately depicting the monuments of ancient and modern Rome; in this plate however, probably because the design of Porta Angelica was not regarded as being very interesting, Vasi focussed on the light effects of sunset behind Casino di Belvedere. In the vision of Pope Pius IV who in 1563 opened the gate in the new walls surrounding the Vatican, Porta Angelica should have become a primary gate by being an alternative to Porta del Popolo as access to Rome for travellers coming from the north. Therefore he opened Strada Angelica, a new road going from the gate to Ponte Milvio and Via Cassia; Vasi's view was published in 1747 and it shows that the Pope's project was not successful: the two small side entrances were walled up, the bridge over the moat had a reduced size and the access of carriages was blocked by a small column. A painting very similar to Vasi's plate by Christopher Wilhelm Eckersberg (it opens in another window) shows that things had not changed in 1813.
The view is taken from the green dot in the small 1748 map here below. In the description below the plate Vasi made reference to: 1) Casino di Belvedere; 2) Corridors linking the Casino with Palazzo Vaticano. 2) is shown in another page. The map shows also: 3) Porta Angelica; 4) S. Anna dei Palafrenieri; 5) Fornice di Via di Porta Angelica. 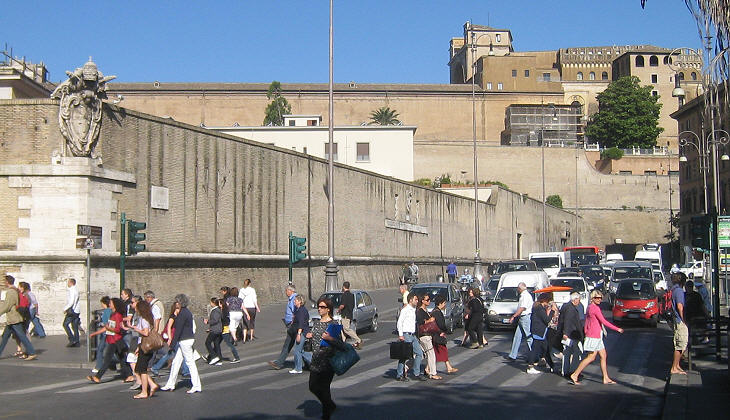 The development of Rione Prati, a new quarter north of the Vatican, led in 1888 to the decision of filling the moat and pulling down Porta Angelica; today most of the traffic coming from the western suburbs of Rome is channelled along the walls around the Vatican and the site could not be more different from the peaceful atmosphere of Vasi's plate.
The coat of arms on the corner of the walls belongs to Pope Pius XI and it was placed there in the 1930s. 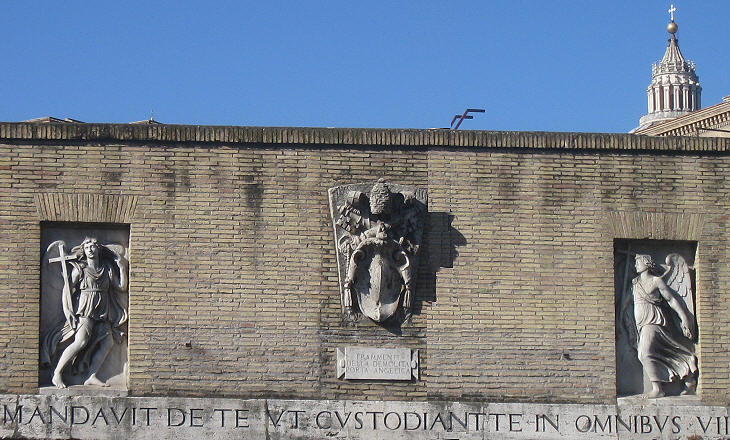 Decorative elements from the gate, one of which is shown in the image used as background for this page

The statues portraying two angels, the coat of arms and the inscription which decorated Porta Angelica were rearranged near the site of the demolished gate. Pope Pius IV was born Giovanni Angelo de' Medici; he gave his papal name to Porta Pia and his personal name to Porta Angelica (he also commissioned the redesign of Porta del Popolo and Porta Pertusa); he stressed the association of the gate with the angels by placing an inscription with a sentence taken from Psalm 91: Angelis suis mandavit de te ut custodiant te in omnibus viis tuis (He will command his angels concerning you to guard you in all your ways).
Porta Angelica knew its moment of glory on December 24, 1783, when King Gustav III of Sweden made his entrance to Rome through Porta Angelica (because Porta del Popolo was closed for repairs). He was the first Lutheran sovereign to visit Rome, in the footsteps of his ancestor Queen Christina of Sweden in 1655, who however came to convert to Catholicism. The purpose of his journey was not political or religious, but aimed at buying works of art and completing his education. 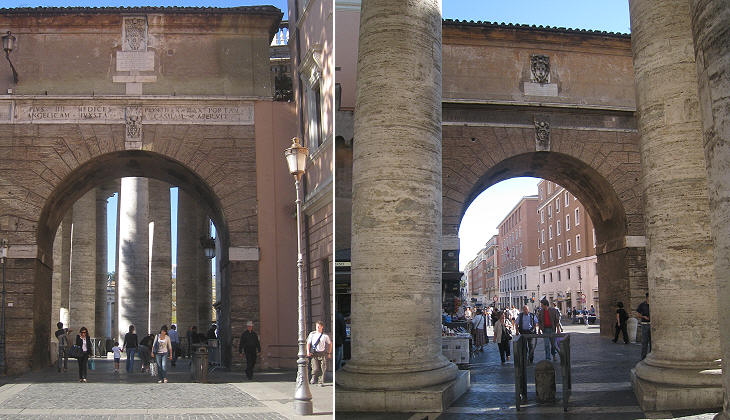 (left) External side; (right) seen from the colonnade of Piazza S. Pietro

This fornice (an arched opening) in the old walls which protected Borgo was made by Pope Pius IV; he did so because Porta S. Pellegrino, the existing gate, was not in a straight line with Porta Angelica. The inscription celebrates the opening of Strada Angelica; the upper coat of arms belongs to Pope Urban VIII who covered the first section of Passetto, the secret passage inside the old walls. At the time of its opening the fornice directly led to Piazza S. Pietro, as the colonnade was built a century later (see a 1593 map by Antonio Tempesta). 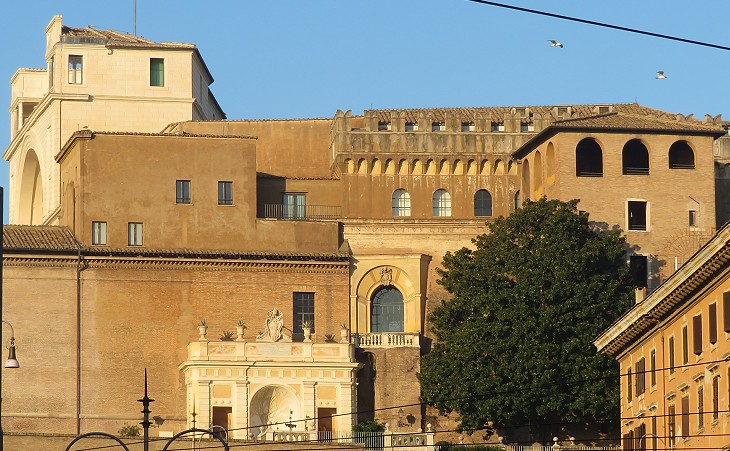 Casino di Belvedere: (far left) large niche of the Casino to which in 1761 Vasi dedicated a view (the page covering it provides more information on the Casino and its collections of ancient statues); (lower part) Fontana del Vascello; (far right) the tower housing the winding ramp designed by Donato Bramante

The private Gallery of the Pope, looking into the Garden Belvedere, is seated upon the side of the Mount Vatican, where Pope Innocent the eight built part of the Pallace, and called it Belvedere, of the faire prospect of all Rome subject to the eye. And Pope Julius the second placed in this Garden many very faire statuaes.
Fynes Moryson - An Itinerary: Containing His Ten Years Travel Through .. Italy (in 1594)
The Concise Oxford English Dictionary says: belvedere, a summer house or open-sided gallery positioned to command a fine view. The definition fits perfectly with the casino built by Pope Innocent VIII in 1487; it had the appearance of a small castle because at the time it was located outside the walls. 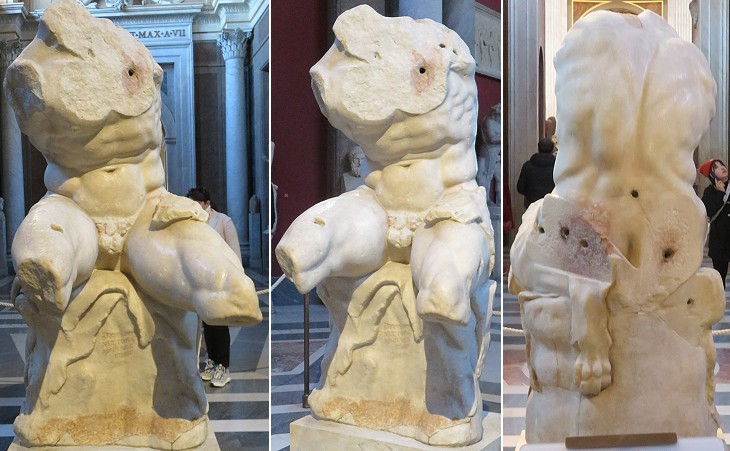 Torso del Belvedere at Sala delle Muse, a fragment of a statue of Hercules sitting on a lion's skin which was studied by all Renaissance artists

In an unfurnished Room going out of the Cortile is the famous Torso of Michel Angelo as 'tis call'd, because he was so fond of it, and study'd so much after it; and indeed 'tis Exquisitely fine: of White Marble, a Hercules made by Apollonius an Athenian; Julius II. put it in the Cortile.
Jonathan and Jonathan Richardson - Account of Some of the Statues, etc. in Italy - 1722
To no other antique is torch-illumination so advantageous as to the (..) wonder of art, the celebrated Torso which can never be enough praised.
J. W. Goethe - Italian Journey - July 16, 1787 - Translation by Charles Nisbeth.
During the XVIth century the Popes began to move some of the ancient statues which were found in Rome to the casino. Some of them were named after it (see also Apollo del Belvedere). 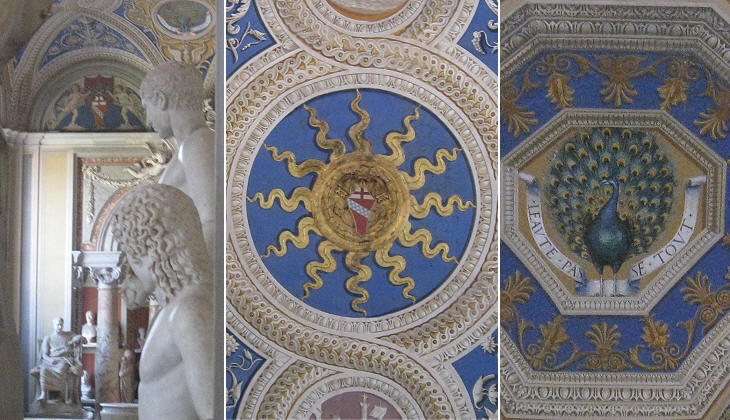 In the late XVIIIth century Pope Clement XIV and Pope Pius VI rearranged the old casino in order to better display the papal collections of ancient sculptures; the decoration of the rooms was entirely renovated, but the original references to Pope Innocent VIII were not erased, although we now see them inside later frames. You may wish to see some more images of the casino ceilings. 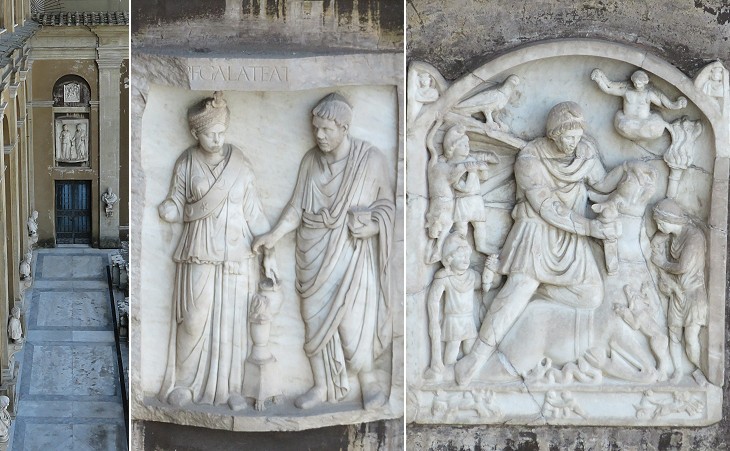 (left) Terrace on the northern side of the casino; (centre) relief portraying Galatea, a priestess of Isis, in full garb with a priest or a devotee (from Villa Mattei); (right) altar to Mithra

When the casino was rearranged as a museum, visitors were probably less than a hundred per day and they were allowed to inspect the whole building including its terraces. Today access is not allowed to the external parts of the casino, as wall as to a number of halls, and some interesting reliefs and busts which were described in the 1792 Italian-French guide book to the museum by Pasquale Massi, its curator, cannot be properly observed. 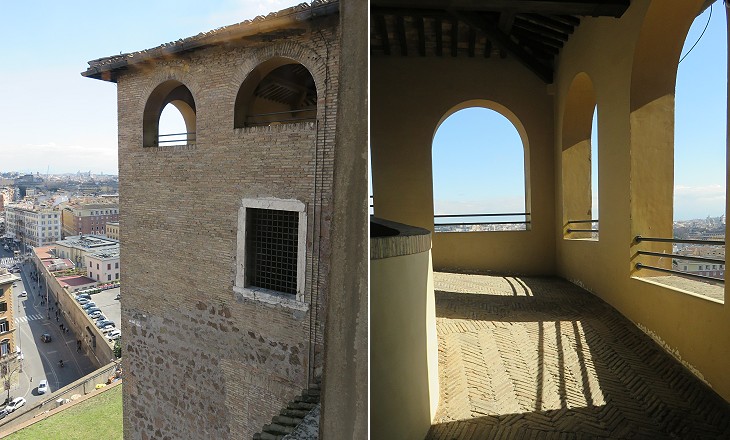 The Pallace is of great circuit, and the staires are so easie, that Horses and Mules may goe up to the top of the Mountaine, and with easie ascent and descent beare the Popes carriage. Moryson
The casino was designed by Antonio del Pollaiolo, best known as a sculptor, in particular of papal funerary monuments. A few years later Donato Bramante added a winding ramp to allow Pope Julius II to reach his apartments by riding a mule. 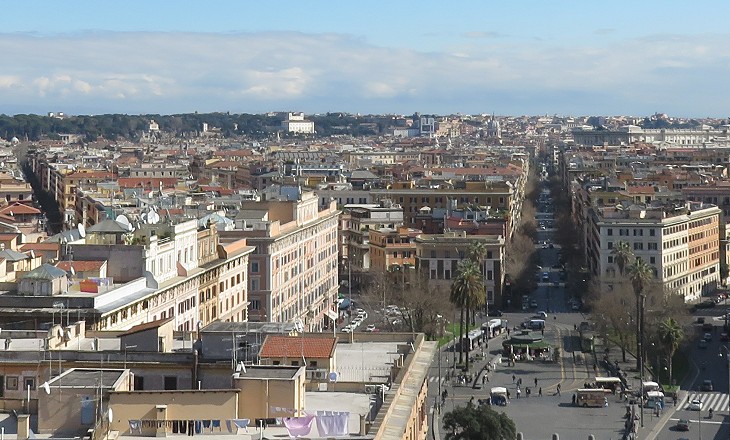 View towards Via Cola di Rienzo in Rione Prati; in the background Villa Medici and S. Carlo al Corso

The weather is cold here during the prevalence of the tramontana: but I enjoy the brilliant skies and the delicious purity of the air, which leaves the eye free to wander over a vast extent of space. Looking from the gallery of the Belvedere at sunset this evening, I clearly saw Tivoli, Albano, and Frascati, although all Rome and part of the Campagna lay between me and those towns. The outlines of every building, ruin, hill and wood were so distinctly marked and stood out so brightly to the eye!
Anna Jameson - Diary of an Ennuyée - 1826 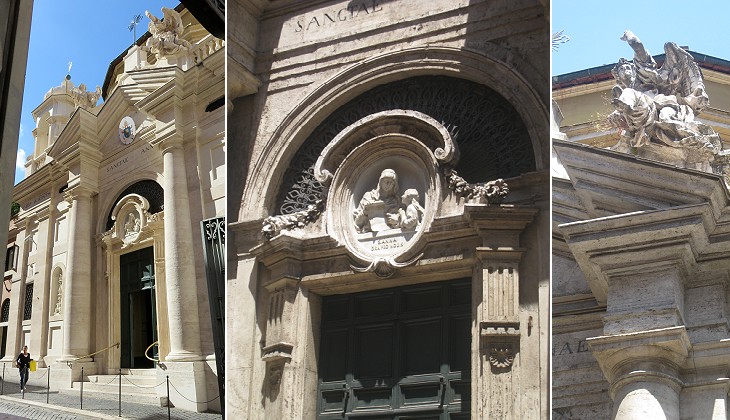 Palafrenieri is just a pompous word for grooms, palafreno meaning in old Italian a horse for parades, similar to English palfrey. S. Anna dei Palafrenieri was built in 1565-1573, most likely by Giacinto Barocci, son of Jacopo Barocci il Vignola, but it was given a more elaborate aspect by Alessandro Specchi who added the portal, the balustrade and the bell towers at the beginning of the XVIIIth century. The church is now inside the Vatican City State, but access to it is usually allowed without formalities. 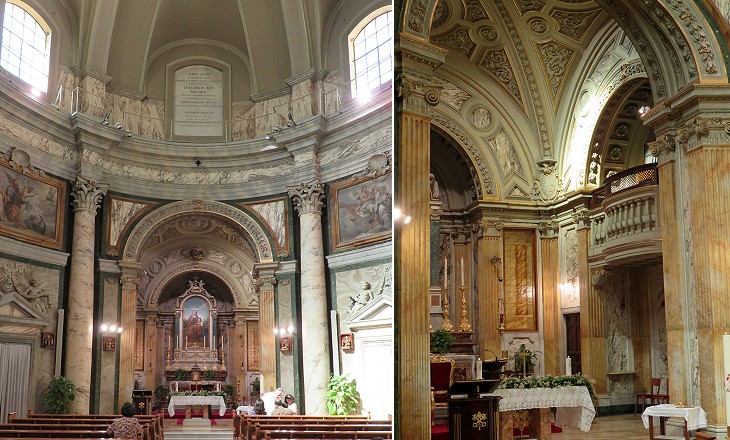 Initially the guild which built the church was limited to the palafrenieri of the papal court, but during the XVIIth century it accepted the servants of ambassadors and eventually it was opened to servants of all noble families. The decoration of the interior is mainly a 1746 work. Today it is the parish church of the some 800 inhabitants of the Vatican City State.
You may wish to see a directory of Roman churches belonging to a guild. 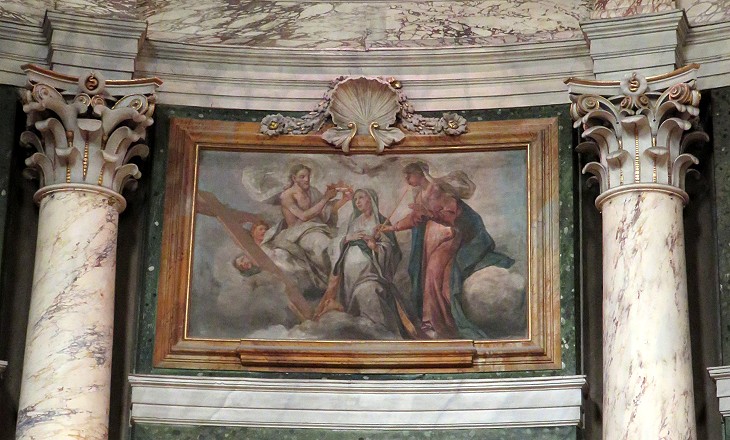 Glory of St. Anne by Ignazio Stern (1679-1748) an Austrian painter who spent most of his life in Italy

The Walls between Porta Angelica and Porta Castello 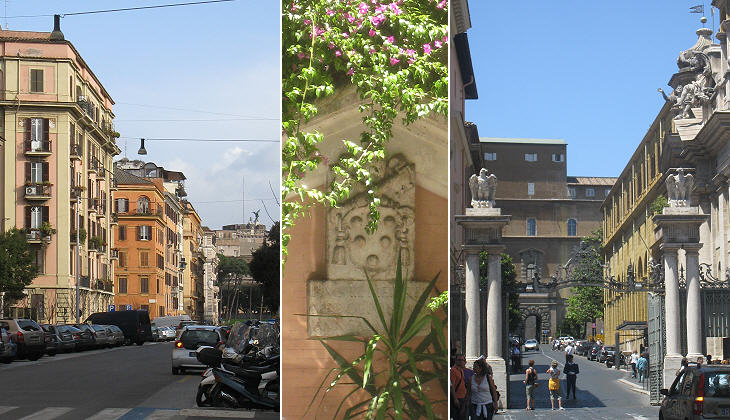 (left) The street leading to former Porta Castello and Castel Sant'Angelo which was opened by pulling down the walls; (centre) coat of arms of Pope Pius IV in the courtyard of a modern building along this street; (right) Porta di S. Anna

The line of the walls was modified after 1929, when the territory of the Vatican City State was agreed to by Italy and the Holy See. In order to reflect the new border a wall was built between the site of former Porta Angelica and Fornice di Via di Porta Angelica.
Porta di S. Anna, a gate opened in the new walls near the church by the same name became the main entrance to the Vatican. Every morning a flow of civil servants, priests and nuns go to work under the scrutiny of Swiss guards who have their barracks to the left of the gate.
Porta di S. Anna was built during the pontificate of Pope Pius XI, whose heraldic symbols (an eagle on top of three pills) are designed in the style which prevailed during the Fascist regime.