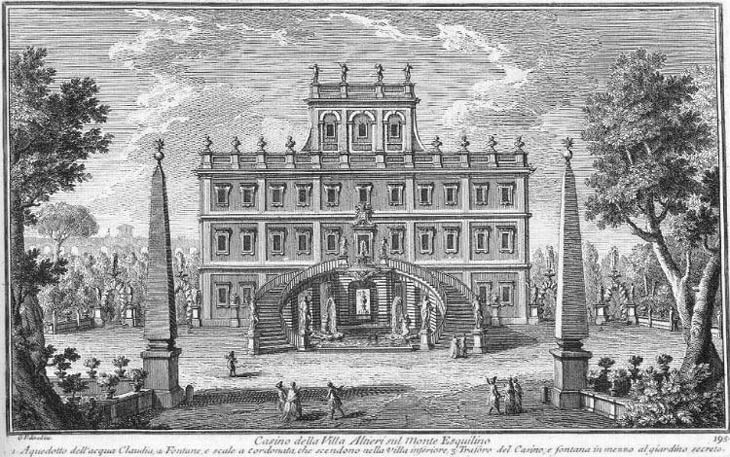 Villa Altieri was designed in ca. 1670 by Giovanni Antonio de' Rossi for the family of Pope Clement X. The villa is located midway between S. Maria Maggiore and S. Croce in Gerusalemme. It had a front and a back garden and as Vasi points out from one garden you could see the other one through an empty space on the ground floor. The hidden garden had a famous maze and the two gardens were connected through unusual arches.
The view is taken from the green dot in the small 1748 map here below. In the description below the plate Vasi made reference to: 1) Acqua Claudia aqueduct (the branch built by Emperor Nero); 2) Fountains and steps leading to the lower part of the gardens; 3) Hole in the Casino and fountain in the hidden garden. 1) is shown in another page. The small map shows also 4) Villa Astalli; 5) Villa Giustiniani Massimo; 6) Area of Horti Lamiani. 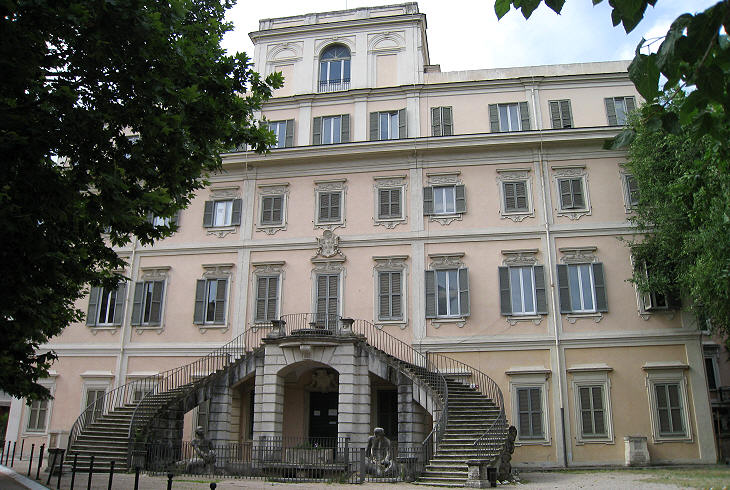 The Casino (today a school) is all that is left of the whole villa. Areas within the walls of Rome became so valuable after 1870 (when the city became the capital of Italy) that the owners of this and other adjoining villas could not resist the temptation of selling them. The Casino was modified by the addition of another storey and by the closure of the loggia. 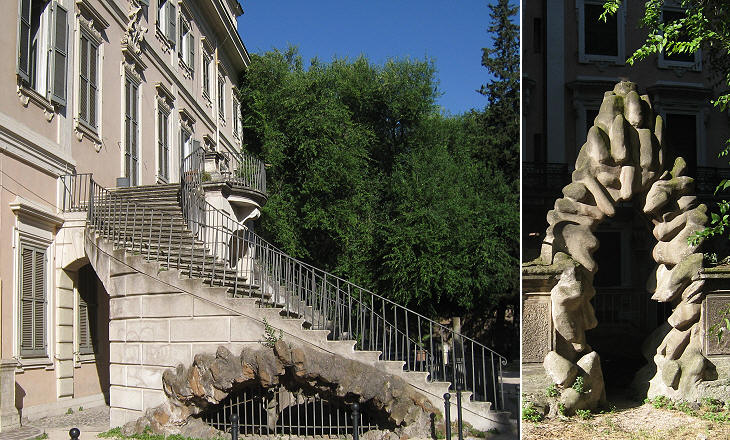 Giovan Antonio de' Rossi (1616-95), produced some works that might be described as transitional between the High and the Late Baroque. This is less obvious in his ecclesiastical (e.g. L'Immacolata Concezione) than his secular buildings. (..) Reserve and an immaculate sense of proportion are the virtues of his style (..) which predestined him to play an important part in the development of XVIIIth century architecture.
Rudolf Wittkower - Art and Architecture in Italy - 1600-1750 - Penguins 1958
De' Rossi was a contemporary of Gian Lorenzo Bernini, who introduced naturalistic elements (rocks) into the design of palaces (e.g. at Palazzo di Montecitorio). 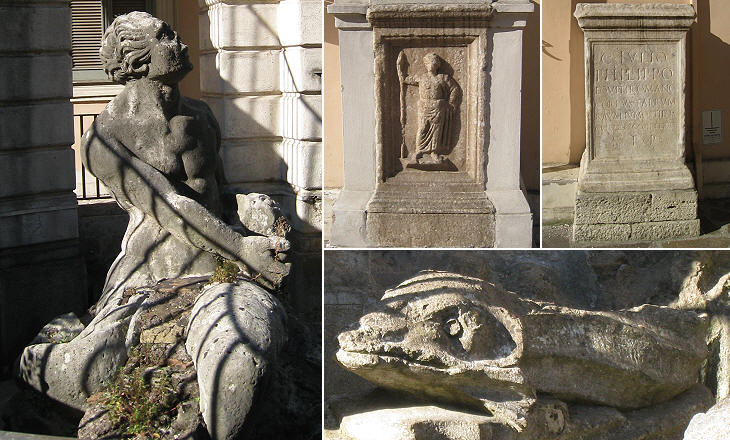 (left) Statue of a triton; (right-above) ancient relief and base of a statue of a member of the "Fabri Navales" guild of Ostia; (right-below) statue of a fish

At one point the Casino was even used as a prison for women; it is understandable why the statues which embellished the staircase and the roof were removed. The only remaining fountain shows the influence of Bernini's works. 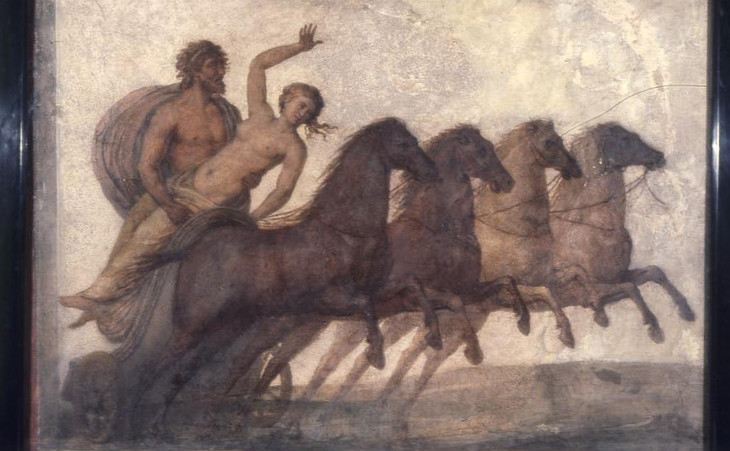 The Altieri decorated their villa with some ancient statues and inscriptions and with paintings found in 1674 near Isola Farnese in a Roman tomb (Sepolcro dei Nasoni). These paintings soon deteriorated, but copies were drawn and described by Gian Pietro Bellori, curator of antiquities for Pope Clement X and better known as an art historian. Some of the extremely restored paintings were eventually sold to the British Museum.

The Altieri had a large palace in Rome (designed by Giovanni Antonio de' Rossi) and another one at Oriolo Romano, one of their fiefdoms. Their heirs had a lavishly decorated chapel at S. Maria in Campitelli. 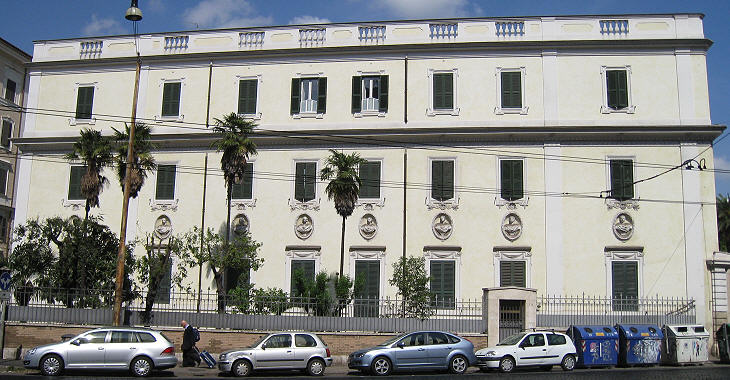 The small casino of Villa Astalli was built in the second half of the XVIIth century; at that time it was essentially a farmhouse, although it was decorated with stucco busts and friezes. Today it is located near one of the busiest crossroads of Rome. A storey has been added to the original building. The Astalli were a prominent Roman family in the Middle Ages, but they lost power and wealth until Pope Innocent X chose Cardinal Camillo Astalli as one of his closest advisors. He was a relative of Donna Olimpia Maidalchini, sister-in-law of the Pope. The Astalli owned the fiefdom of Sambuci. 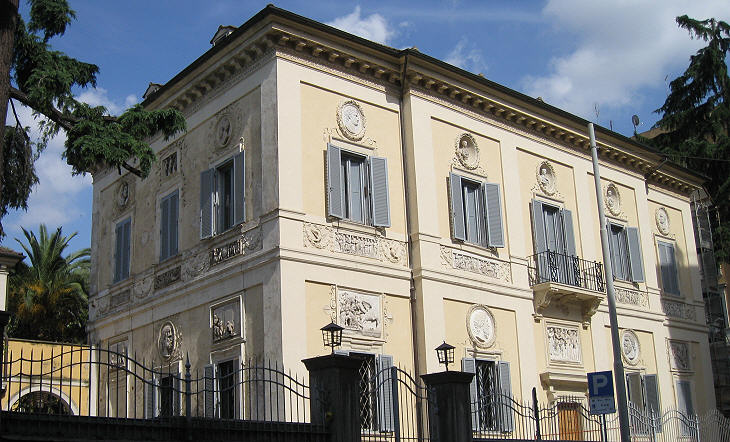 In 1566 Ottoman Sultan Suleyman the Great conquered the island of Scio (today Chios) which was a possession of the Genoese Giustiniani family. Giuseppe, a member of this family, moved to Rome and became a prominent figure of Roman society thanks to the family's enormous wealth; his son Vincenzo bought a palace near S. Luigi dei Francesi and the fiefdom of Bassano and in ca. 1600 he built a villa between that of the Astalli and S. Giovanni in Laterano. 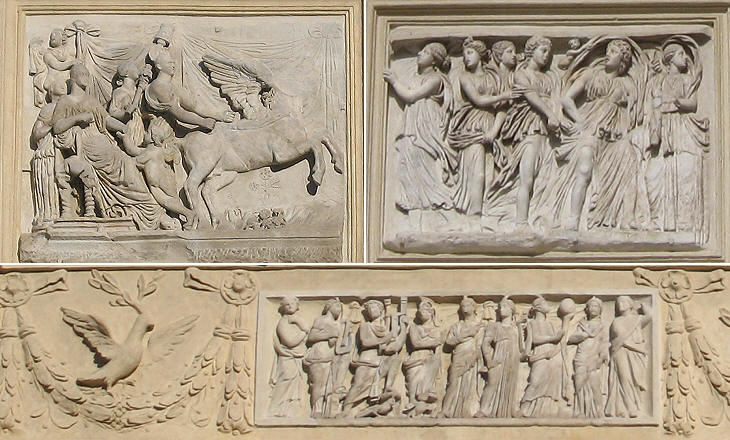 (above) Ancient reliefs (that to the right portrays Achilles at Scyros, where the hero disguised himself as a girl); (below) stucco with the Pamphilj heraldic symbol and relief portraying the Muses

The Giustiniani embellished their town palace with a very fine collection of ancient statues and reliefs. Andrea Giustiniani, heir of Vincenzo, married Maria Pamphilj, niece of Pope Innocent X and he embellished the façade of the casino with ancient Roman reliefs (mainly fronts of sarcophagi). 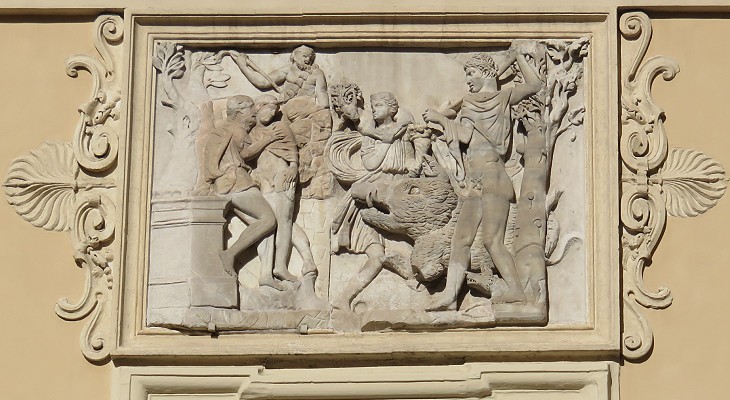 Relief portraying Meleager who is about to kill his uncles

Meleager's killing of the Calydonian Boar was the subject of many ancient reliefs. The hunt however, notwithstanding the killing of the boar, did not have a happy ending.
Meleager, himself, pressed his foot down on the head of the deadly creature, and said to Atalanta 'Girl from Nonacria, take the prize that is mine by right, and let my glory be shared with you.' Then he gave her the spoils, the hide bristling with hair, and the head remarkable for its magnificent tusks. She delighted in the giver no less than the gift, but the others were envious, and a murmur ran through the whole company. Of these, Plexippus, and Toxeus, the sons of Thestius, Meleager's uncles, stretching their arms out, shouted loudly: 'Come on, girl, leave them alone: do not steal our titles to honour, and do not let too much faith in your beauty deceive you, lest your love-sick friend turns out to be no help to you.' And they took the gifts away from her, and denied him the right to give them. The descendant of Mars could not bear this, and bursting with anger, gnashing his teeth, he said: 'Learn, you thieves of other men's rights, the difference between threats and actions', and plunged his iron point into Plexippus's chest, he expecting nothing of that kind. Meleager gave Toxeus, who stood in doubt, wanting to avenge his brother, but fearing his brother's fate, scant time for doubt, and while his spear was still warm from the first brother's murder, he warmed it again with the second brother's blood.
Ovid - Metamorphoses - Book VIII - translation by A. S. Kline.
For more quotations from Ovid's Metamorphoses you may wish to see this page.

(left) Relief believed to portray Alexander the Great; (right) another round relief

In 1803 the villa was sold to the Massimo; in 1821-1828 the German painters Schnorr, Koch, Veit, Overbeck and Fuhrich decorated its interior with frescoes showing scenes from Ariosto, Dante and Tasso. They were called Nazarene from their clothing and hairstyle; their paintings were a reaction to Neoclassicism.
The gardens of Villa Giustiniani Massimo are lost: their main gate was moved to Villa Mattei. 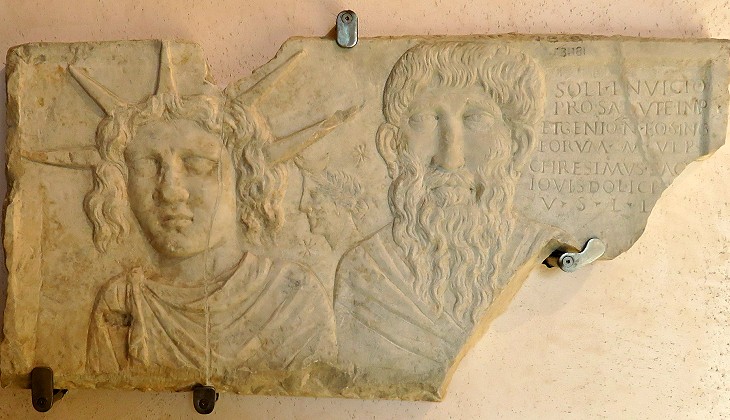 Emperor Septimius Severus reorganized the defence of Rome: he stationed a legion he trusted at Albano and in the city he built two barracks for cavalrymen. Emperor Constantine instead went in the opposite direction and he greatly reduced the number of soldiers who protected the city by dissolving the Praetorian Guard and by closing the barracks of the cavalrymen. One of these barracks was identified near Villa Giustiniani and an interesting relief was found there in 1885. It shows that Roman soldiers were fascinated by beliefs they learnt about during their campaigns in the eastern provinces of the Empire. Doliche was an ancient town very near today's Gaziantep in south-eastern Turkey. According to recent archaeological studies, reliefs and inscriptions indicate that the cult of Jupiter Dolichenus had elements in common with those of Mithra, Sol Invictus and Isis. Clear evidence of the cult of Jupiter Dolichenus has been found in Roman towns near the Rhine, e.g. Frankfurt, and the Danube, e.g. Carnuntum, borders. 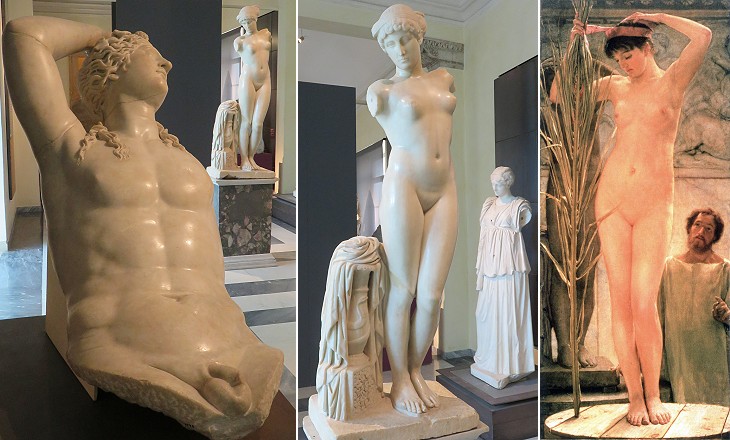 (left/centre) Musei Capitolini: statues found in 1874 in the area of "Horti Lamiani": Recumbent Dionysus and Esquiline Venus; (right) "A Sculptor's Model" by Sir Lawrence Alma-Tadema (1877); the Esquiline Venus is hidden by the palm frond

The large areas in the eastern part of Rome where popes and cardinals built their villas had been used for the same purpose by the ancient (and wealthiest) inhabitants of the city. They were called horti, a word that initially indicated a sort of family kitchen garden, but which in the Ist century AD was used with reference to large suburban villas. Horti Sallustiani, Horti Liciniani and Horti di Mecenate are some of the best known ancient villas inside the walls of Rome. In the XVIth century the Farnese gave this name to their villa on the Palatine.
After 1870 Villa Altieri and neighbouring Villa Palombara were divided up and used for new developments; in 1874 ruins of a villa which had belonged to Lucius Aelius Lama, a consul and a friend of Emperor Tiberius, came to light. We know that the property eventually was acquired by the imperial family. The works of art which were found at Horti Lamiani were placed there in the IInd century AD. The discovery of the statue of Venus attracted a great deal of public attention and it became known as the Esquiline Venus. 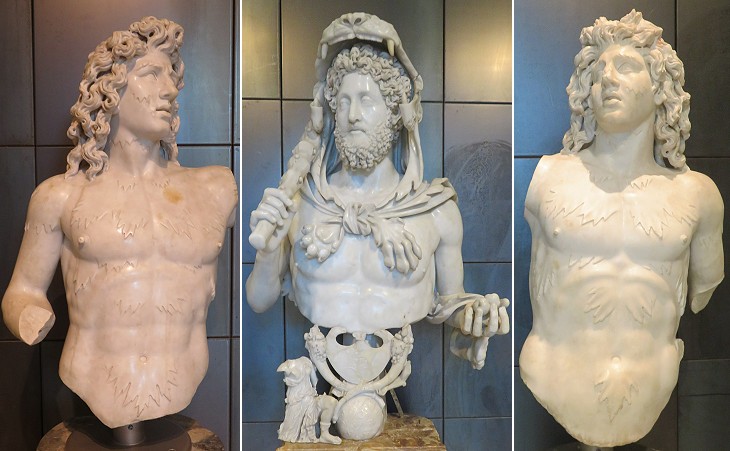 Musei Capitolini: group of statues found in 1874 in the area of "Horti Lamiani" and portraying Emperor Commodus as Hercules and two tritons

I have myself seen a gallery two hundred and seventy-six feet long, the pavement of which was inlaid with the rarest and costliest specimens of alabastrine-agate. (..) All these things were found in November, 1875. On Christmas eve of the preceding year, while our men were excavating (..) at the north end of the gallery mentioned above, the ground gave way, giving us access to a crypt or cellar on the floor of which we found lying the celebrated bust of Commodus in the character of Hercules, flanked by two tritons or marine centaurs.
Rodolfo Lanciani - New Tales of Old Rome - 1901 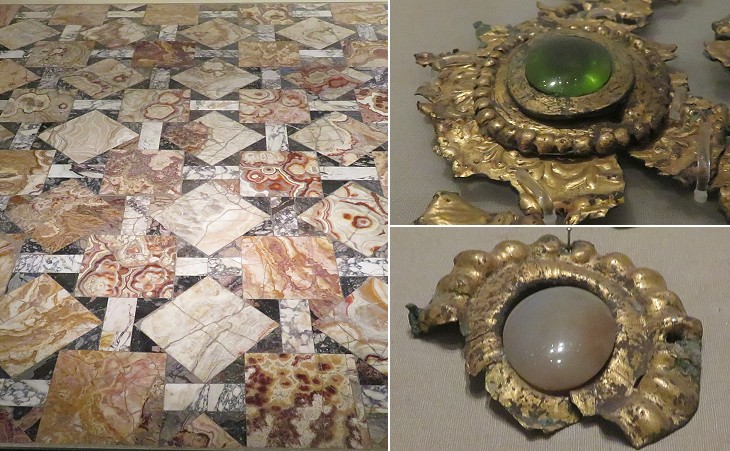 As regards the furniture of this delightful palace, I find the following description of a piece discovered in September of the same year (..) eighty or ninety yards from the room in which the statues were found: "It is not possible to ascertain the exact shape of this extraordinary piece of furniture, which had the frame of hard wood, encrusted with gilt metal, and studded with precious stones". Lanciani