Links to this page can be found in Book 2, Day 5, View C8 and Rione Sant'Angelo. 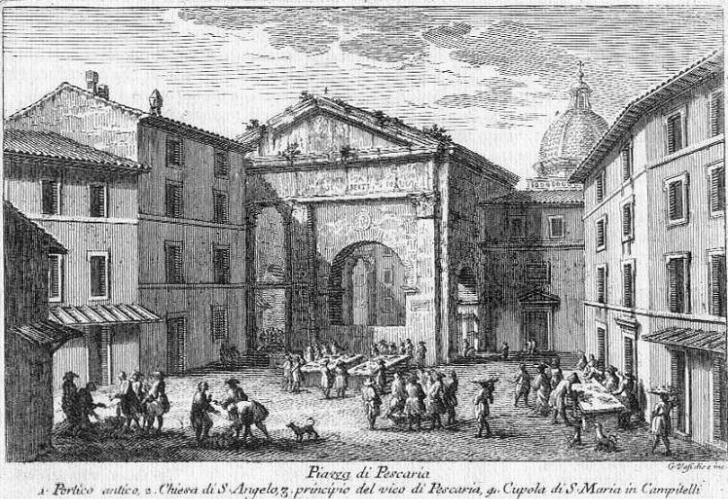 This small 1752 etching by Giuseppe Vasi had three features which attracted the interest of prospective foreign buyers. It depicted: a) Portico di Ottavia, a monument of Ancient Rome which was associated with Emperor Augustus, b) the Dome of S. Maria in Campitelli, a XVIIth century church, and c) a scene of ordinary Roman life because it showed the fish market of Rome. Pesce means fish hence pescaria, today pescheria, means fish shop/market.
The view is taken from the green dot in the small 1748 map here below (near one of the gates of the Jewish Ghetto). In the description below the plate Vasi made reference to: 1) Ancient Portico; 2) S. Angelo; 3) Vico (narrow street) di Pescaria; 4) Dome of S. Maria in Campitelli. 4) is shown in another page. The small map shows also: 5) S. Andrea dei Pescivendoli; 6) S. Ambrogio della Massima; 7) Casa dei Vallati; 8) Albergo della Catena; 9) Casa dei Fabi. 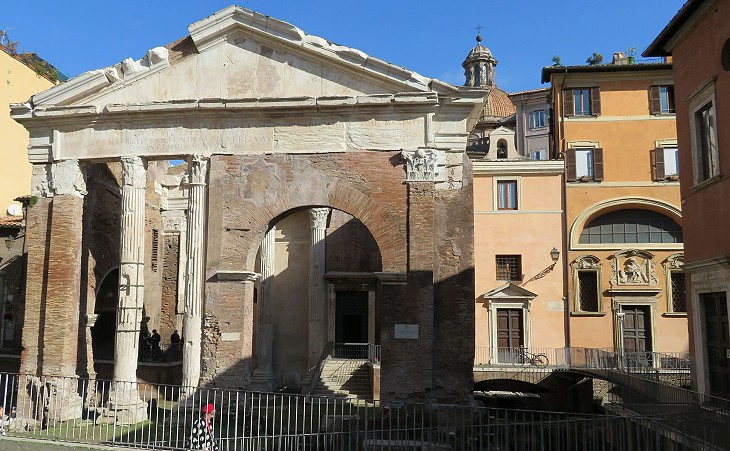 In the late XIXth century the fish market was moved to another location and the whole area was redesigned in conjunction with the construction of high walls on the river banks. Portico di Ottavia was freed from the houses to its left and in recent times its foundations were brought to light and a passage leading to Teatro di Marcello was opened. You may wish to see some late XIXth century drawings depicting the fish market. 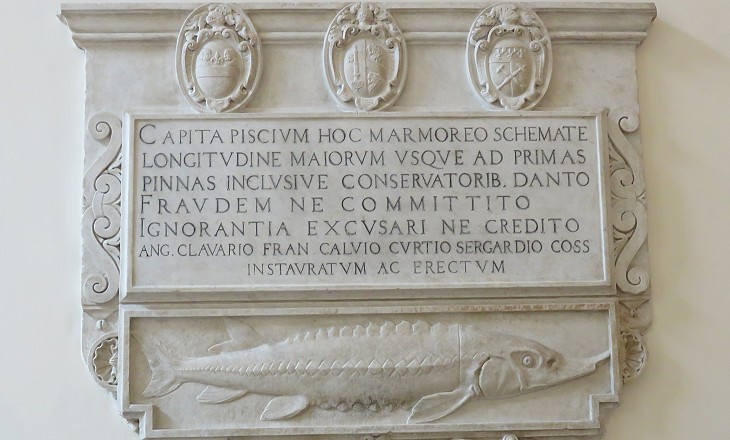 Musei Capitolini: 1581 inscription from Piazza di Pescheria stating that the heads of the fish which exceeded the size of the relief were to be given to the Conservatori, i.e. to the Municipality of Rome

No want of fish either of fresh or salt water, though it be sold commonly dearer than flesh, as being brought a great way. Scarce any fish to be found any where on the coast of Italy but some time or other it may be met withal heer. Those that are the most frequent in the markets are, of River or Fresh-water fish, Pike, Carp, Tench, Trout, Eel, Barbie, Chevin, Dace. I do not remember that I ever saw a Perch to be sold in Rome. Of Sea-fish, Mullus antiquorum, which they call Triglia, of which they have a Proverb, La Triglia non mangia chi la piglia. He that takes the Triglia eats it not. This fish the French call Rouge from its colour and we in Cornwal (where I have seen of them taken) Surmullet. Spigole, in Latin Lupus marinus, of which kind I have not seen any in England; Orate, Giltheads; Cephali, which we in English call Mullet, the ancients called it Mugil; Sarde, a kind of Sprat; Conger; Lamprey; Sole; Plaise and others of the flat kind; Merluzzos, which we call Hake; sometimes small sturgeons; Dog-fish of several sorts; Tuny and Sword-fish is also to be sold heer.
John Ray - Observations (..) made in a journey through part of (..) Italy in 1663
The fish depicted in the relief is a sea sturgeon. It was caught in May/June when it entered the river to breed. It was called Lupus Tiberinus (Tiber Wolf) by the ancient Romans and it could reach a remarkable size. The head was regarded as a delicacy for making a really good fish soup.
Maybe the fishmongers who worked at the market resented this sort of taxation, but they could not complain about the artistic way they were notified about it. This duty was abolished in 1798. 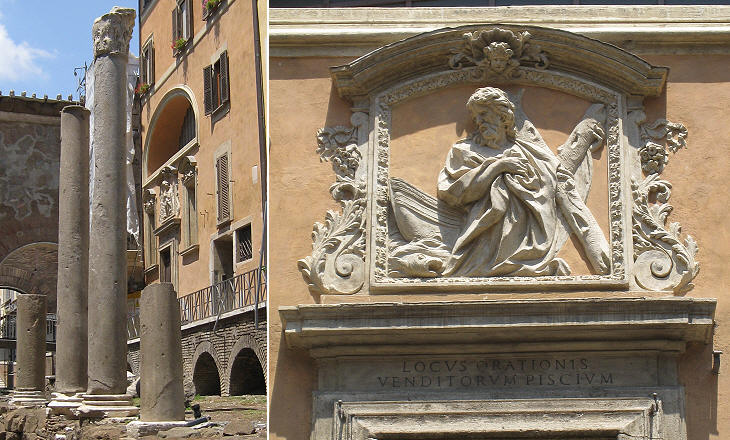 In 1689 Università dei Pescivendoli, the guild of the fishmongers, decorated a small oratory and dedicated it to St. Andrew, who was a fisherman by trade (see a list of churches belonging to a guild). A fine stucco relief above the portal portrays St. Andrew: in line with the traditional iconography the saint bears his cross, but he seems more interested in watching the symbols of his trade. Today the oratory houses a gift shop. 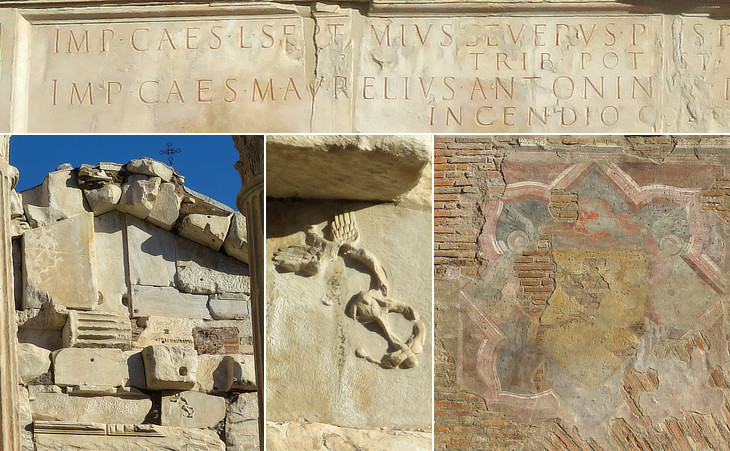 (above) Part of the inscription celebrating Emperor Septimius Severus and his son Caracalla for a restoration after a fire (incendio); (below-left) a restoration of the Vth/VIth century where ancient materials were reused; (below-centre) a relief perhaps depicting a "caduceus", a symbol of Mercury; (below-right) fresco perhaps depicting the coat of arms of a cardinal; see another detail of the portico in the historical section

The portico was initially built in the IInd century BC to surround two existing temples to Jupiter and Juno. It was rebuilt by Augustus who dedicated it to his sister Ottavia (the nearby theatre was dedicated to Marcellus, Ottavia's son). It was restored by Emperor Septimius Severus in 203 AD. The area of the portico included today's Piazza di Campitelli and it ended near S. Caterina dei Funari. Parts of the portico and of the temples are still inside the houses which were built in the following centuries. You may wish to see Portico d'Ottavia in a 1588 Guide to Rome. 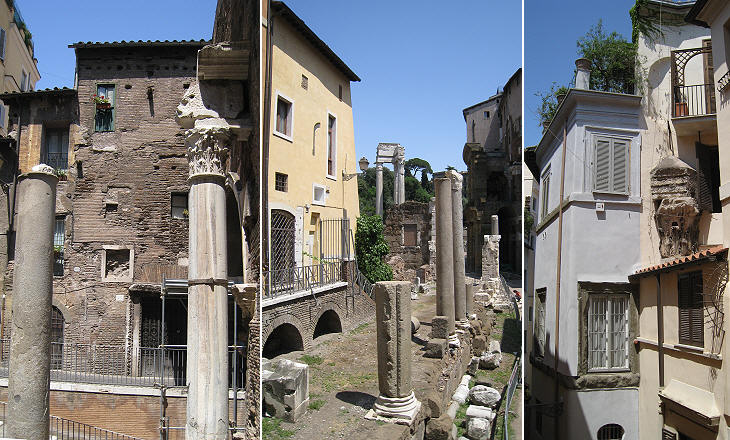 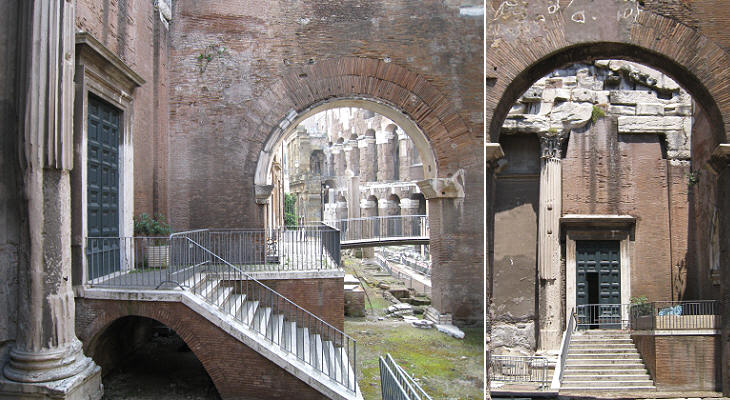 (left) Lateral view of the entrance showing in the background Teatro di Marcello; (right) view showing the difference in the ground level between the ancient Roman period and the XVIth century

The portico houses the XVIth century entrance to S. Angelo in Pescheria (aka S. Michele Arcangelo in Pescheria). The first church was built in the VIIIth century, but it was modified several times and in a particularly extensive way in the XIXth century. 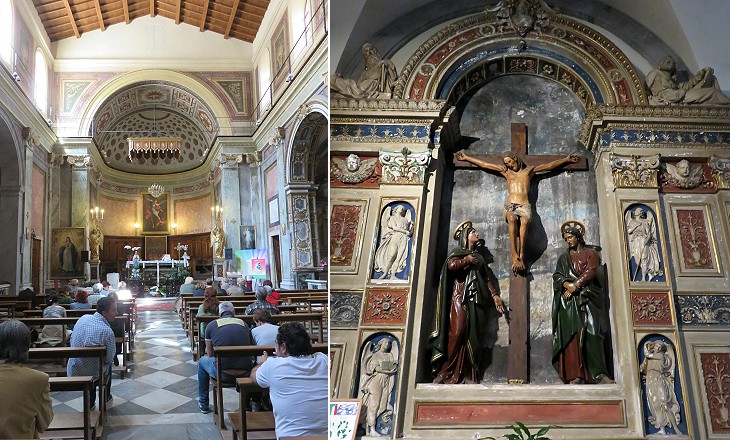 The interior was entirely redesigned in 1864 with the aim of eliminating some structural deficiencies of the building. The result of this intervention deprived the church of its original design and of many works of art. In addition the decorated ceiling collapsed in 1928. 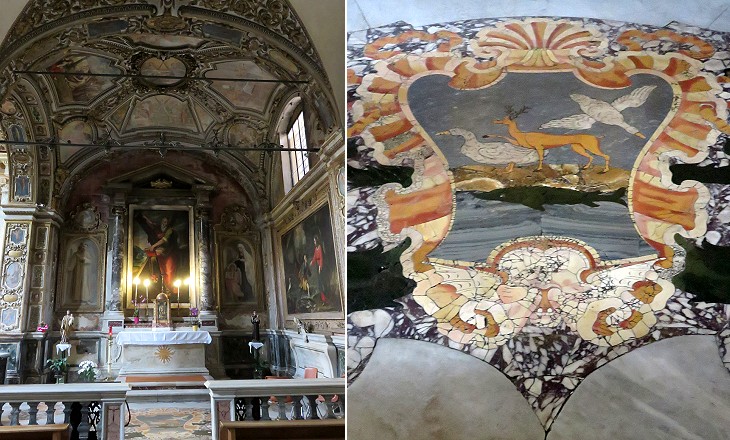 (left) Cappella di S. Andrea dei Pescivendoli; (right) marble inlay with the coat of arms of the fishmongers. It depicts a deer, symbol of nobility, a dove, symbol of fecundity, a goose, symbol of fidelity and a sturgeon

Luckily the XIXth century changes did not impact on the chapel the fishmongers had inside the church. It was built between 1579 and 1619 and eventually a passage was opened between the chapel and the adjoining oratory. 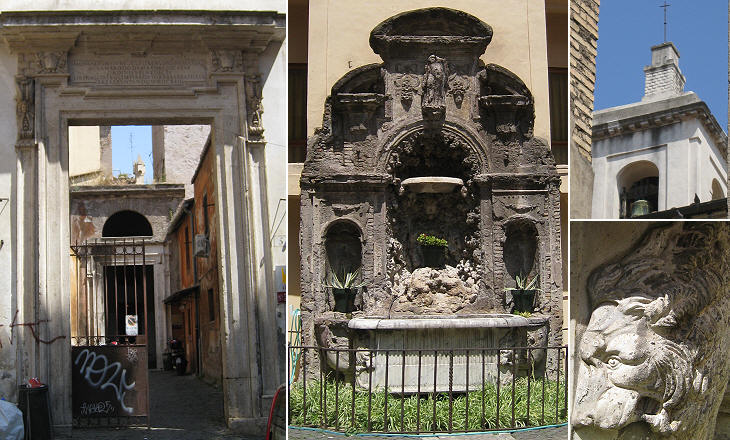 The nunnery of S. Ambrogio is located behind Portico d'Ottavia and part of it is today used for other purposes. The fine 1626 portal built at the expense of Abbess Beatrice de Torres, sister of Cardinal Ludovico de Torres, Archbishop of Monreale, leads to a small warehouse of the municipal street cleansing services; torre means tower and the Abbess placed a small tower on the top of the bell tower. The Torres had a palace in Piazza Navona and they restored S. Pancrazio. A gate on the left leads to a courtyard with a small fountain and to the church. 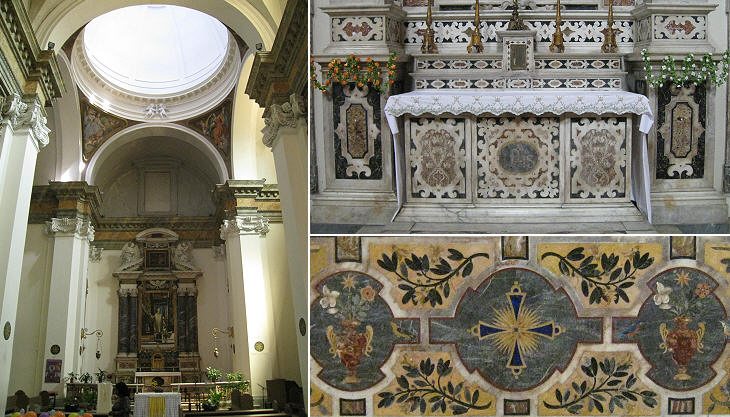 (left) Interior; (right-above) marble altar from a church in Liguria; (right-below) detail of a marble altar bequeathed by the Barberini family

The church, although largely modernized, retains some interesting memories of its past and in particular some finely decorated altars. 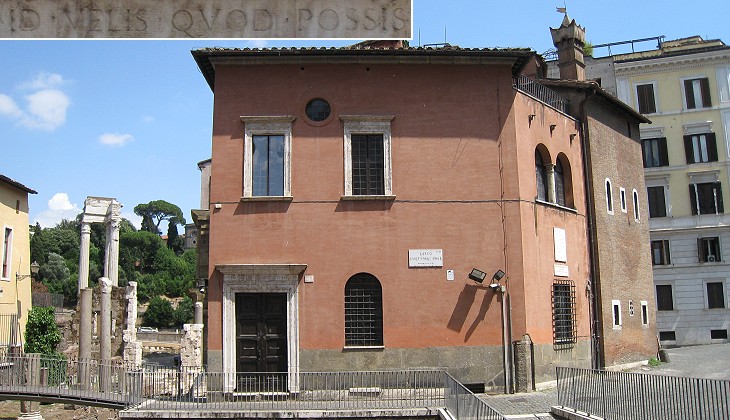 Casa dei Vallati after its 1930s restoration; (inset) inscription on the lintel of the portal. It is a quotation from Terence, Andria, II, 1, 6: "(Quoniam id fieri quod vis non potest) id velis quod possis" i.e. (As you can not do what you wish,) you should wish what you can do

The plate shows on the right side a rather anonymous building. In 1930 it was partially demolished to highlight its original design. It belonged to the Vallati (or Vailati) family and it consisted of two houses of different periods (left XVIth century - right XIVth century). 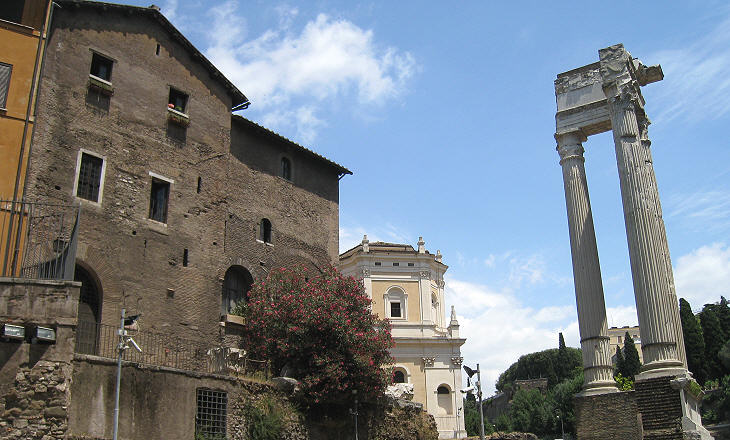 In 1926-931 the excavation of the area between Portico d'Ottavia and Teatro di Marcello isolated two medieval buildings. They housed Albergo della Catena, an inn for the merchants who came from the countryside to do business in nearby Piazza Montanara. It was named after a chain which blocked the passage to carriages in the small street which led to the inn. 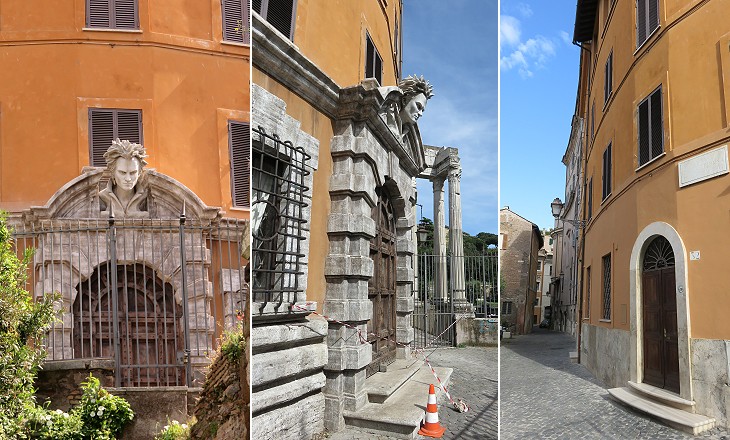 In Rome things to see come (left/centre) .... and go (right). In 2015 an unassuming house behind Albergo della Catena was given a temporary fake XVIIth century decoration for the shooting of a movie (you may wish to see a page on Cinecittà, the movie studios of Rome) 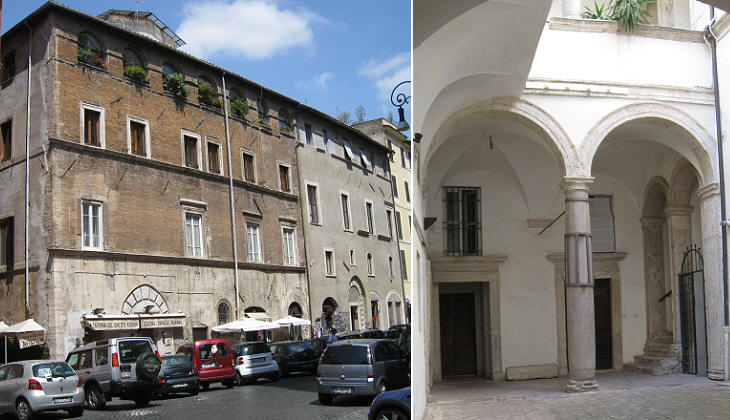 Vico di Pescaria was a very narrow street leading to Piazza Giudia; in the general redesign of the area it was enlarged by pulling down its southern side and it is now called Via del Portico d'Ottavia. Its northern side has some interesting Renaissance buildings. A recent restoration has given emphasis to the original architectural design of two houses belonging to the Fabi, who pretended to descend from the Gens Fabia, an important family in Ancient Rome during the Republic (see an inscription found at Sagunto). The buildings were embellished by loggias, which were closed at a later stage to obtain some more rooms.

Next plate in Book 2: Piazza Giudia.
Next step in Day 5 itinerary: Piazza Montanara.
Next step in your tour of Rione Sant'Angelo: Teatro di Marcello.