Piazza Giudia
(Vasi at work in the Grand View of Rome) 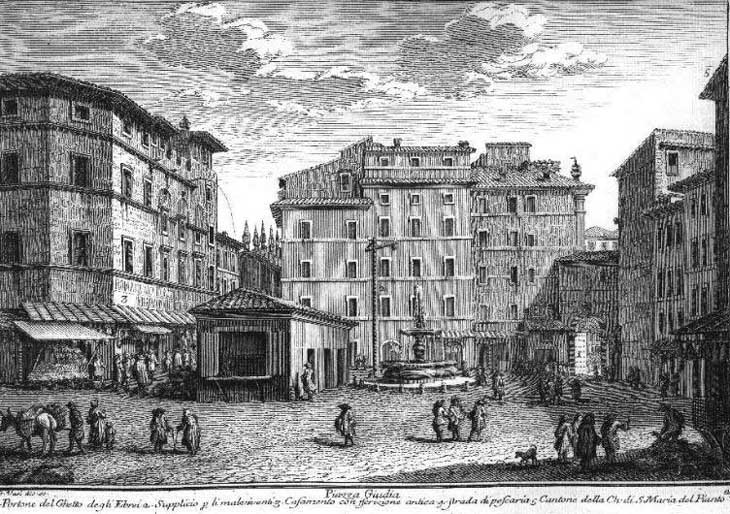 When Giuseppe Vasi published this etching in 1752, Jews were forced to live inside small and segregated parts of towns in most European countries. In this plate Vasi shows the square named after the Jews (Ebrei is the usual Italian word, whereas Giudei has a derogatory innuendo) who lived in a nearby walled area.

Museo Ebraico di Roma: 1508 inscription celebrating the enlargement of the street leading to FOR(um) IUD(aeorum), the Jewish quarter, by the municipal authorities at the time of Pope Julius II

Many Jews began to live in this neighbourhood in the XIIIth century, whereas before they mainly lived in Ripa Romea on the other bank of the River Tiber. In 1555 Pope Paul IV forced all the Jews of Rome and of Latium to move inside a walled enclosure (Ghetto) between Strada di Pescaria and the river. Similar quarters were created at Ancona and at Cavaillon in the Comtat Venaissin. The small building at the centre of the square was a police station from which the papal guards checked that the Jews complied with the regulations which disciplined their lives. According to the papal bull Cum nimis absurdum, Jewish men had to wear a yellow bonnet and their women had to cover their heads with a yellow scarf; this last imposition was particularly insulting because prostitutes had to wear a similar scarf. In 1561 during the construction of the walls of the Ghetto fragments of gigantic statues of Castor and Pollux were found; they were restored and placed at Piazza del Campidoglio.
The view is taken from the green dot in the small 1748 map below. In the description below the plate Vasi made reference to: 1) Portone (gate) del Ghetto degli Ebrei; 2) the gallows; 3) Casamento con iscrizione antica (house with an ancient inscription, i.e. Casa di Lorenzo Manilio); 4) Strada di Pescaria; 5) S. Maria del Pianto. The small map shows also 6) S. Maria in Publicolis; 7) S. Maria in Cacaberis; 8) Palazzo Cenci; 9) Palazzetto Cenci; 10) Via della Reginella. The dotted line in the small map delineates the borders among Rione Sant'Eustachio (around S. Maria in Publicolis), Rione Regola (left) and Rione Sant'Angelo (right). 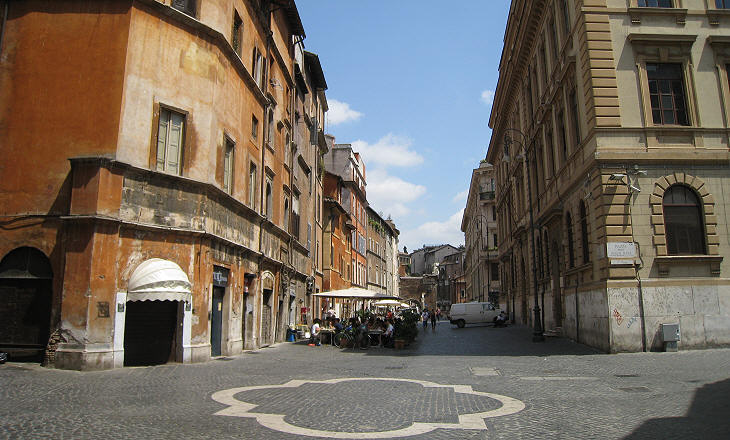 The view in June 2009 (white stones indicate the location of the fountain; in the background Portico d'Ottavia)

The old Ghetto does not exist any longer: it was demolished in the 1880s because its proximity to the river made it very unhealthy: see a view of its side along the river before 1888 and Tempio Maggiore, the modern synagogue which was built at its place. The area of former Piazza Giudia is still a meeting point for Roman Jews; there are several kosher groceries and restaurants and the large building to the right houses the Jewish schools. In the distance one can see Portico d'Ottavia where a fish market was held in the XVIIIth century. Strada (or Vico) di Pescaria, the street which led there was very narrow and all the buildings on its southern side were demolished. 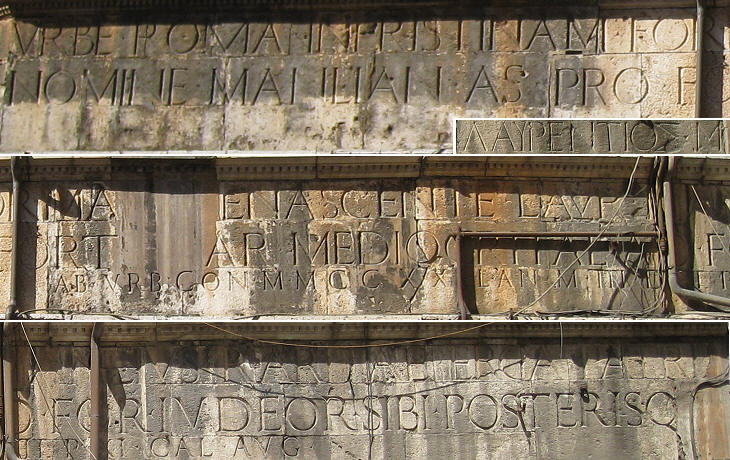 The main inscription; (inset) the name of Lorenzo Manilio written in Greek on one of the doors

Vasi described the inscription on a group of houses as antica (ancient), but he should have called it modern because it dates back to 1468. The text was dictated by Lorenzo Manilio, the owner of the houses, to express his admiration for Ancient Rome:

Broad translation: While Rome is returning to its original shape/glory, Lorenzo Manilio built this house in the Jewish quarter as a token of love for his city and within the limit of his modest means. This house for him and his heirs was begun on the eleventh day after the beginning of August in the year 2221 (this date is calculated from the foundation of Rome in 753 BC which would be 1468 AD).
We do not know much more about Lorenzo Manilio, apart from what he wrote in the inscription; his name is repeated above the doors of the ground floor. The inscription is interesting for many reasons: the use of the word Renascente to indicate the return of Rome to its original splendour, the mastery of the ancient Roman inscriptions (proportions, abbreviations, use of V instead of U) and the omission of all references to Christianity (no mention of the ruling pope and use of the Roman calendar).

Lorenzo Manilio decorated his house with fragments of ancient reliefs; it can be regarded as one of the first examples of that all'antico fashion which characterized many Renaissance and Late Renaissance buildings of Rome (e.g. Villa Medici).
The image used as background for this page shows the inscription Have Roma (Hail Rome) on one of the windows. Have is a spelling variant of Ave. Fontana di Piazza Giudia by Giacomo della Porta is now in a nearby square (Piazza delle Cinque Scuole, named after the five different rabbinical schools which existed in the Ghetto). The construction of a large fountain in the vicinity of the Ghetto is an indication of the different approaches of the popes towards the Jews; some of them were more lenient than others; the fountain does not bear the coat of arms of a pope, but those of the four Conservatori who were in charge in 1593. They were magistrates who assisted in the administration of Rome. 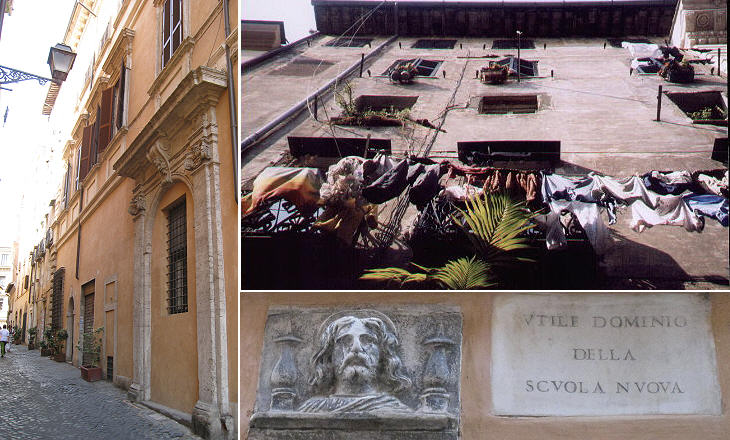 (left) Via della Reginella and the closed entrance of Palazzo Costaguti; (right-above) one of the tall houses built in Via Reginella; (right below) tablet indicating a house which belonged to Spedale del Salvatore (or di S. Giovanni) and which was acquired by one of the rabbinical schools

In 1798 the French opened the gates of the Ghetto, but the return of the papal government after the Napoleonic era closed them again. This decision was criticized by many European governments and due to their pressure in 1823 Pope Leo XII added Via della Reginella, a street leading to Fontana delle Tartarughe to the area of the Ghetto. The Costaguti closed the entrance to their palace from Via della Reginella and properties belonging to Christian brotherhoods were sold to Jewish institutions. The street is the only surviving part of the old quarter. Some relatively tall houses are an indication that the Ghetto was overcrowded (this occurred also in the Ghetto of Venice). "She warned him that he must next pass the Island of the Sirens, whose beautiful voices enchanted all who sailed near. ... 'Plug your men's ears with bees-wax' advised Circe" (Robert Graves - The Greek Myths). It is said that the Jews followed Circe's advice to Ulysses when they were forced to listen to weekly sermons delivered from within this XVIIIth century chapel attached to the house of Lorenzo Manilio.
The chapel was deconsecrated and used as a shop window for many years. It has been restored and bequeathed to the Roman Jewish Community.
S. Gregorio ai Quattro Capi was a church immediately outside the eastern gate of the Ghetto where the Jews had to listen to other sermons aimed at their conversion. 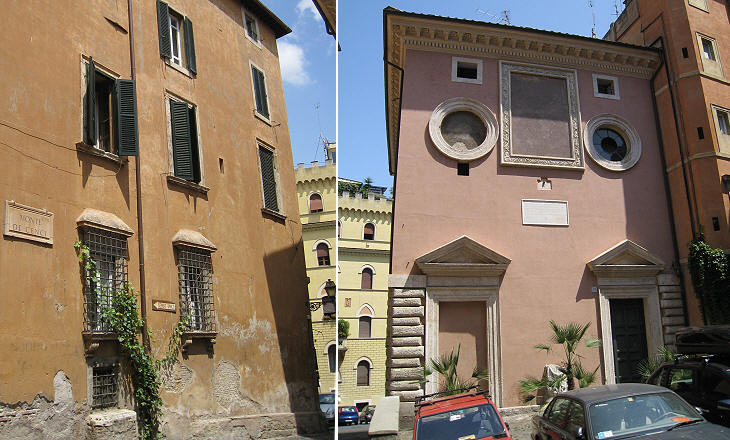 Monte de' Cenci is a small artificial hill derived from the ruins of Teatro di Balbo. Here, first the Crescenzi, then the Cenci built their fortified houses, some of which were modified in the XVIIIth and XIXth century. In 1575 the Cenci restored an old church which was surrounded by their properties and turned it into their family chapel.
The name of the Cenci is associated with Beatrice Cenci, a young woman who instigated the murder of her father Francesco, a brute. Pope Clement VIII Aldobrandini showed no mercy. She was put to death in Piazza di Ponte on September 11, 1599. Piazza di Ponte is the small square in front of Ponte S. Angelo: a little chapel (now lost) was used for providing religious help to the condemned. Beatrice was killed along with her stepmother and two brothers. Only the youngest brother was spared, but he had to attend the executions. A presumed portrait of Beatrice by Guido Reni inspired many writers and poets, including Stendhal, Shelley and Dickens. The many possessions of the Cenci were confiscated and were acquired by the Aldobrandini. Years later the last of the Cenci took legal action and in 1699, 100 years after the death of Beatrice, the Cenci regained a large part of their possessions. 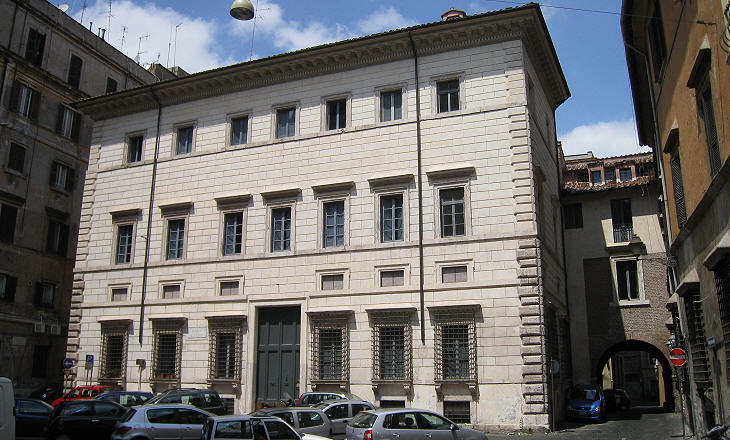 Palazzetto Cenci and to its right Arco dei Cenci

The Cenci built a small palace near Monte de' Cenci which was linked to the main one by an arch. Palazzetto Cenci has a neat Renaissance design by Martino Longhi il Vecchio. 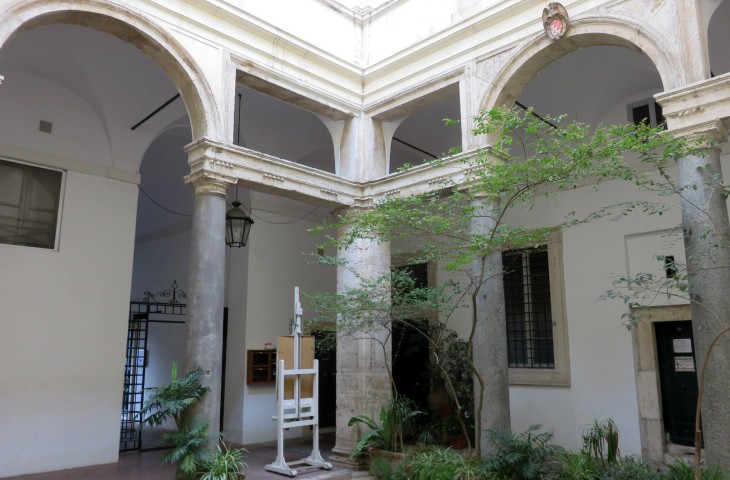 In the courtyard there is an interesting use of serliana.

(left) Coat of arms of the Cenci; (centre) decoration of the entrance of a palace near Arco dei Cenci; (right) window with a baroque frame in another building belonging to the Cenci 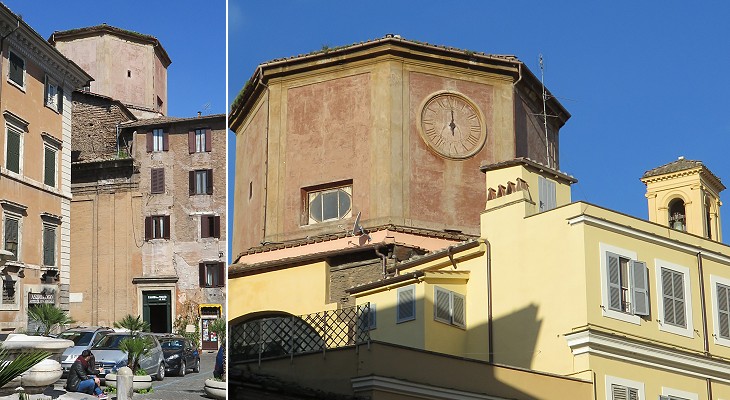 (left) S. Maria del Pianto; (right) detail of the dome and of the bell tower

With the creation of the Ghetto some churches inside it were demolished while others were built in the proximity of its gates. S. Maria del Pianto (weep) owes its name to a sacred image which wept when a young man was assassinated in front of it. In 1608 it was decided to build a church to house this image properly, but work came to a halt in 1612 and notwithstanding later attempts to complete the building it still lacks a proper façade. 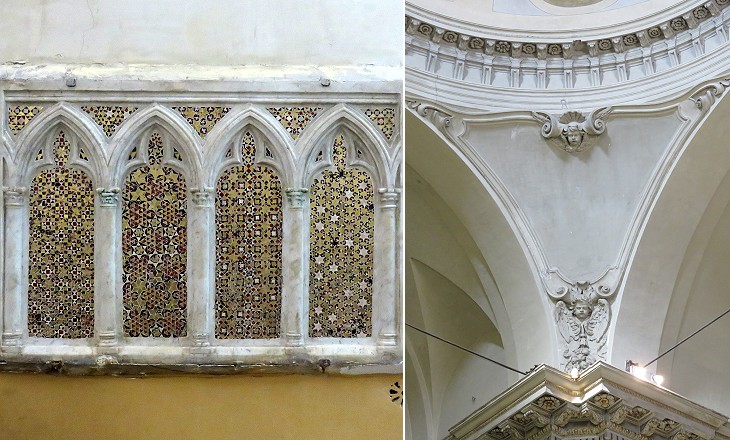 (left) Decoration from the former church of S. Salvatore a Cacaberis which was replaced by S. Maria del Pianto; (right) a pendentive decorated with early XVIIIth century stuccoes 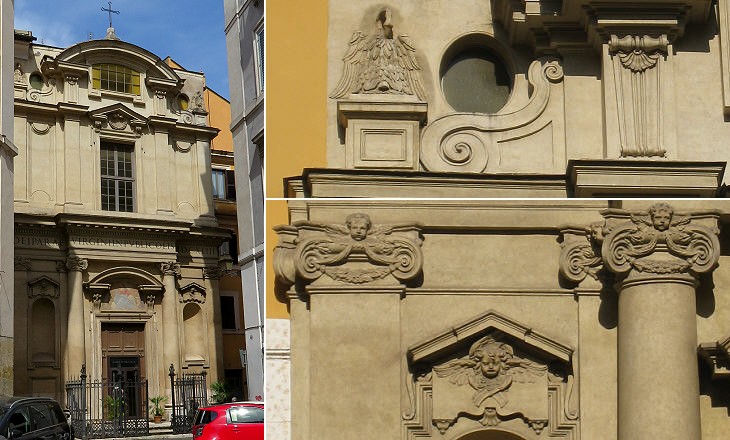 (left) S. Maria in Publicolis; (right-above) detail of the decoration showing a pelican, heraldic symbol of the Santacroce and a Christian symbol of the Passion of Jesus Christ; (right-below) another detail

S. Maria in Publicolis is a small church built by the Santacroce near their palace. They claimed to descend from Publius Valerius Publicola, a Roman consul who in 509 BC promoted laws in favour of the lower classes (publicola means friend of the people). The elegant façade was designed by Giovanni Antonio de' Rossi in 1643. 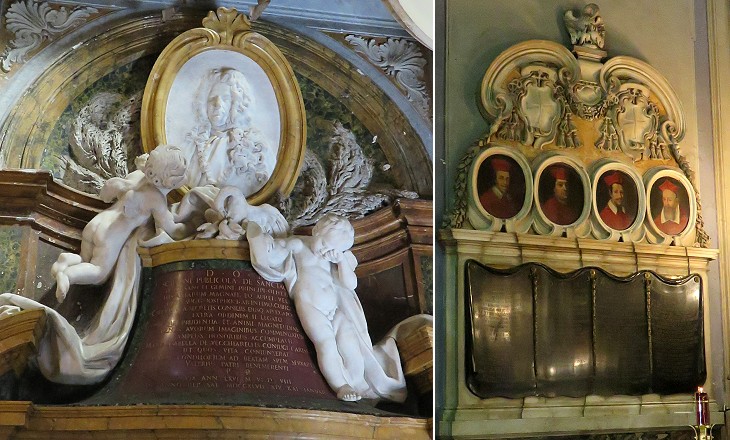 (left) Monument to Scipione Publicola Santacroce by Giovanni Battista Maini and Tommaso Righi (1750); (right) Monument to four Santacroce cardinals (late XVIIth century). See other monuments where the dead is portrayed in a medallion

The church was actually the funerary chapel of the Santacroce and it is crammed with marble monuments erected in memory of members of this family. You may wish to see the Monument to Marquis Antonio Publicola Santacroce and his wife Girolama Nari by Lorenzo Ottoni. The Santacroce had a large palace opposite S. Carlo ai Catinari. In the late XVth century they acquired the fiefdom of Vejano and in 1560 they founded Oriolo (both fiefdoms were bought by the Altieri in 1671). 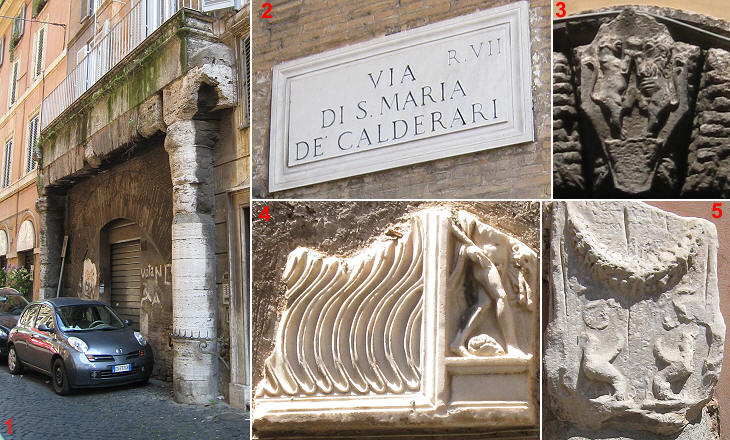 1) Ancient portico (see the nearby plaque indicating the level of the 1598 flood); 2) tablet with the name of the old church; 3) detail of a Renaissance portal in Via S. Maria dei Calderari; 4) relief of a sarcophagus portraying Hercules; 5) funerary monument

S. Maria in Cacaberis (the corrupted name of cacabium, a Roman copper vase) aka S. Maria dei Calderari (makers of cauldrons) is a church which was pulled down in 1881. Its portico made use of structures of an ancient Roman building, which has not yet been identified. The name of a short street departing from modern Via Arenula is the only remaining reference to the church.