Ponte Nomentano
(Vasi at work in the Grand View of Rome) 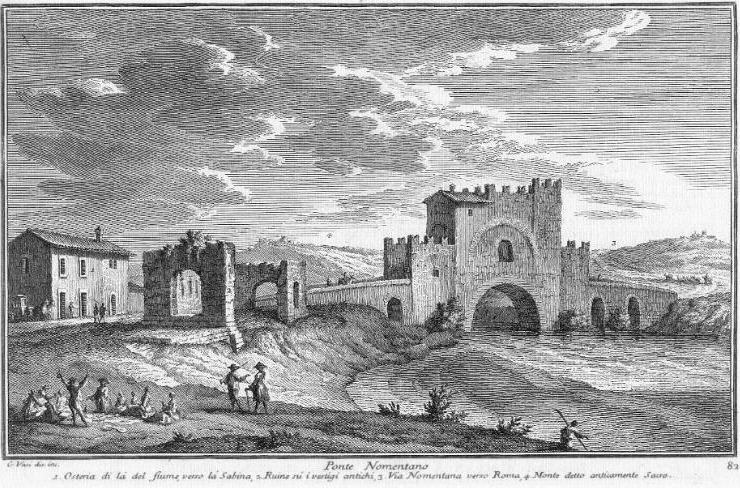 Scampagnata is an Italian word meaning hike in the countryside (It. campagna). Nowadays the word has become out of date, but in the XVIIIth century many middle class families spent their Sundays taking a walk outside the walls of Rome; many went to Prati di Castello, but also the meadows near Ponte Nomentano attracted picnickers, as this 1754 etching by Giuseppe Vasi shows. Ponte Nomentano crosses the River Aniene, a tributary of the Tiber, and it could be reached in about one hour's walk from Porta Pia; food and wine could be bought at an inn near the bridge.
In the description below the plate Vasi made reference to: 1) Tavern on the side of the river towards Sabina; 2) Ruins of the Roman period; 3) Via Nomentana towards Rome; 4) Monte Sacro. The view is taken from the green dot in the small 1920 map here below which shows: 1) Ponte Nomentano; 2) Villa Chigi; 3) Monte Sacro; 4) Sedia del Diavolo; 5) Roman Tomb along Via Nomentana. 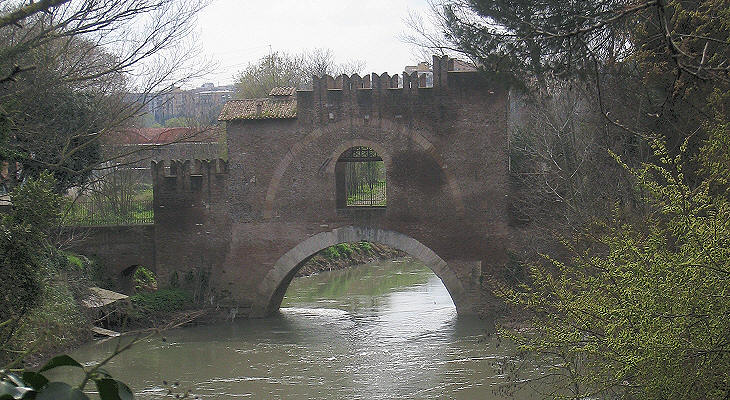 The immediate surroundings of Ponte Nomentano have not been affected by the modern development of Rome along Via Nomentana; in 1924 the increased volume of traffic was redirected over a new bridge built at a short distance from the old one, which is now reserved to pedestrians.
The comparison between a current image with the etching shows that the river bed has not been properly dredged and that therefore the low arch of the bridge could cause an obstruction to the flow of the Aniene; in December 2008 Ponte Nomentano actually caused a major flood (see some images of the Tiber taken during that period). 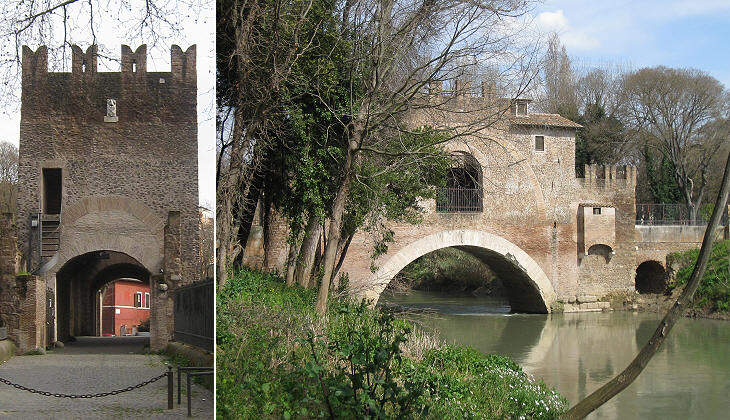 (left) Western side of the bridge; (right) southern side

The Roman bridge had three arches of which only the central one was not damaged during the Greek-Gothic War; in 552 the bridge was restored; some small arches were added to the central one which was fortified; the tower on the side towards Rome was built by Pope Nicholas V (whose coat of arms is shown in the image used as background for this page).
In the past Ponte Nomentano was the subject of many landscape paintings; you may wish to see the works by Camille Corot and his friend Jean-Achille Benouville (they open in another window).

Monte Sacro means Holy Mountain; it is a small isolated hill which at the time of Ancient Rome was chosen by the augures for watching the flight of birds; based on these observations the augures determined whether a proposed action had divine approval. The augures had a temple on the Palatine Hill.
According to Livy in 494 BC, Roman plebeians congregated at Monte Sacro when they abandoned Rome in a sort of general strike. The patrician Menenius Agrippa convinced them to return to Rome and to work by telling them the following apologue (a sort of moral fable):
At a time when the members of the human body did not, as at present, all unite in one plan, but each member had its own scheme, and its own language; the other parts were provoked at seeing that the fruits of all their care, of all their toil and service, were applied to the use of the belly; and that the belly meanwhile remained at its ease, and did nothing but enjoy the pleasure provided for it: on this they conspired together, that the hand should not bring food to the mouth, nor the mouth receive it if offered, nor the teeth chew it. While they wished, by these angry measures, to subdue the belly through hunger, the members themselves, and the whole body, were, together with it, reduced to the last stage of decay: from thence it appeared that the office of the belly itself was not confined to a slothful indolence; that it not only received nourishment, but supplied it to the others, conveying to every part of the body, that blood, on which depend our life and vigour, by distributing it equally through the veins, after having brought it to perfection by digestion of the food.
Applying this to the case and showing what similitude there was between dissension of the members and the resentment of the commons against the patricians he made a considerable impression on the people's minds. A negotiation was then opened for a reconciliation and an accommodation was effected.
(Livy - Book I - translation by George Baker)
According to other sources the plebeians congregated on the Aventine Hill. 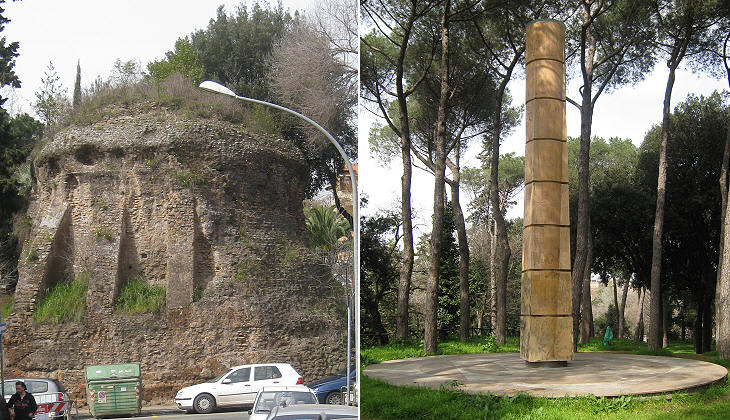 The religion of the ancient Romans did not give much hope about life after death; maybe this is one of the reasons why the wealthiest Romans wanted their funerary monuments to be very noticeable and built them along the roads which linked the city to the provinces. They often placed long inscriptions on them so that their names and deeds would outlast. A 1792 etching by Johann Christian Reinhart (it opens in another window) shows a mausoleum of the Imperial age near Ponte Nomentano; unlike the ruins shown by Vasi, it was not demolished when the neighbourhood was developed.
Simon Bolivar is the national hero of many Latin American countries; at the age of 22, as part of his Italian Grand Tour, he visited Rome and on August 15, 1805 (Ferragosto) from the top of Monte Sacro he took an oath in the presence of Simon Rodriguez, his companion and mentor, that he would not allow his arm to rest, nor his soul to die, until he had realized his dream of liberating the South American world from Spanish dominion. A monument designed by Jorge Castello, a Venezuelan architect, was erected in 2005 to celebrate the event. You may wish to see a 1934 equestrian statue of Simon Bolivar by Pietro Canonica at Piazza Thorvaldsen.

(left) Gate; (right) western side of the casino

The Chigi had a large palace at Ariccia and a villa at Formello. The latter was in poor condition and too far from Rome; in 1763 Cardinal Flavio Chigi iuniore bought a farm near Ponte Nomentano which was turned into a small villa by Tommaso Bianchi and Pietro Camporese; Cardinal Chigi personally supervised its decoration with paintings and furniture. The villa at Formello was eventually abandoned.

Eastern side of the casino

The gate and the entrances to the casino are still decorated with the Chigi heraldic symbols (six mountains and a star), but the furniture and most of the paintings were sold by the heirs of Flavio Chigi. Today the casino is a private property, whereas a section of its gardens belongs to the City of Rome (but the fountains and statues which decorated it are lost). 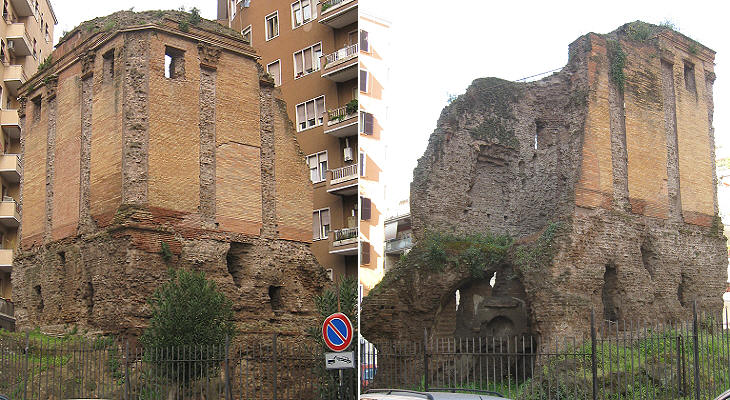 (left) Rear side; (right) front side

Rome January 17th 1831. Ponte Nomentano is a solitary dilapidated bridge in the spacious green Campagna. Many ruins from the days of ancient Rome, and many watch-towers from the middle ages, are scattered over this long succession of meadows.
Letters of Felix Mendelssohn Bartholdy from Italy and Switzerland
A large Roman mausoleum near Via Nomentana was known as Sedia del Diavolo (Devil's Chair) in the Middle Ages because the collapse of its entrance gave it the shape of a gigantic chair, similar to what occurred at Takht-e Soleyman (Solomon's Throne). It was built for Aelius Callistus, a freedman of Emperor Hadrian (whose second name was Aelius). It is one of many brick tombs which were built in the IInd century AD; it had two storeys, a burial-chamber below and a room for ceremonies above. Sepolcro di Annia Regilla is a similar mausoleum which retains most of its original decoration.
Being located near Ponte Nomentano also this tomb attracted the attention of landscape painters; see an 1872 view by Enrico Coleman (it opens in another window) which shows the tomb before it was surrounded by very tall apartment blocks. 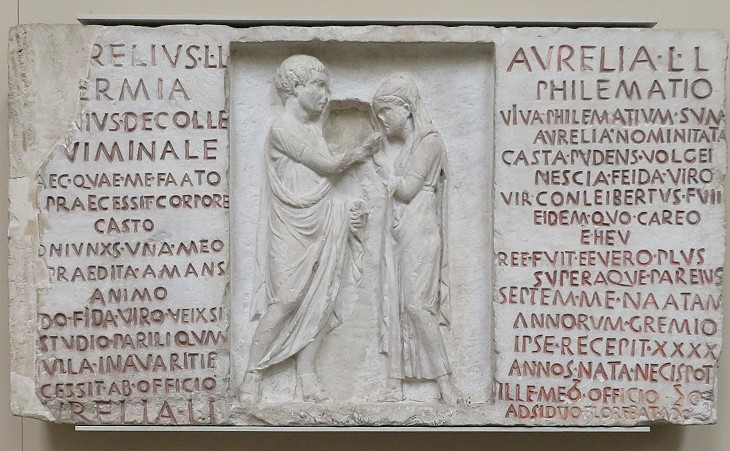 British Museum: gravestone found along Via Nomentana (Ist century BC)

Via Nomentana housed a number of cemeteries including the catacomb of S. Agnese. This gravestone celebrates a couple of former Greek slaves. The long inscription is composed in verses and is particularly interesting and moving:
(left side) Aurelius Hermia, freedman of Lucius, butcher by trade from the Viminal Hill. My partner who departed this life before me was pure of body and loving of spirit. She was the only one for me, and lived her life faithful to her faithful husband, with equal devotion. She never failed in her duties through self-interest or greed. Aurelia, freedwoman of Lucius.
(right side) Aurelia Philematio, freedwoman of Lucius. In life, I was given the name Aurelia Philematium (little Kiss) and led a chaste, modest and sheltered life, faithful to my husband. Aurelius, my husband, whom I now sadly miss, was a fellow freedman. He was, in fact, much more to me than even a parent. He took me into his care at the age of seven. Now at the age of forty, I fall into the hands of death. He flourished in the eyes of others due to my constant and close support.
Prose translation by the British Museum 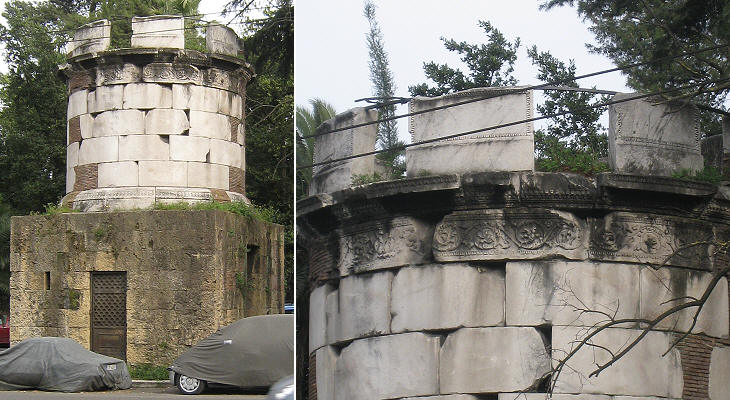 In 1875 excavations at Tor di Quinto, a marshy area west of Ponte Salaro, led to the discovery of a small funerary monument with two identical circular upper parts and fragments of their decoration. Tomba dei Curiatii at Albano is an example of this type of funerary monuments. The fragments of the decoration were utilized for a partial reconstruction of the tomb along Via Nomentana; it was placed immediately outside a rich house; later on the street was enlarged and the tomb ended up in a traffic island.

Next plate in Book 5: Ponte Salaro.
Next step in your tour of the Environs of Rome: Ponte Mammolo.
You can follow Via Nomentana until its end and visit Mentana, Monterotondo and Palombara.