The page covers:
The plate by Giuseppe Vasi
Today's view
Monte Testaccio
Porticus Aemilia and Horrea Galbana
The Walls along the River 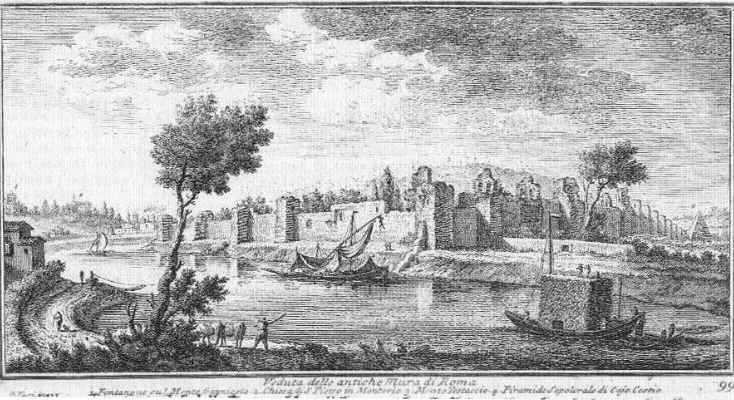 This view of the ancient walls of Rome which Giuseppe Vasi included in Book V (published in 1754), was most likely engraved some ten years earlier for Vedute di Roma sul Tevere, the first book of etchings by Vasi; this explains its size, which is smaller than that of the other plates, and its landscape format.
The view is taken from the green dot in the small 1748 map here below. In the description below the plate Vasi made reference to: 1) Fontanone dell'Acqua Paola; 2) S. Pietro in Montorio; 3) Monte Testaccio; 4) Piramide di Caio Cestio. 1), 2), and 4) are shown in detail in other pages. The small map shows only 3) and 4) because 1) and 2) are far away from the site shown in the etching.

The area shown in the plate was significantly modified in the late XIXth century by the construction of a large slaughterhouse, by the redesign of the river bed and by a railway bridge across the river (the photo shown above was taken from a train). Monte Testaccio, the artificial hill made up of broken testae (ceramic vases used for the transportation of olive oil) was rightly regarded as an archaeological site and it was almost unaffected by these changes and by the development of Testaccio, a modern quarter. 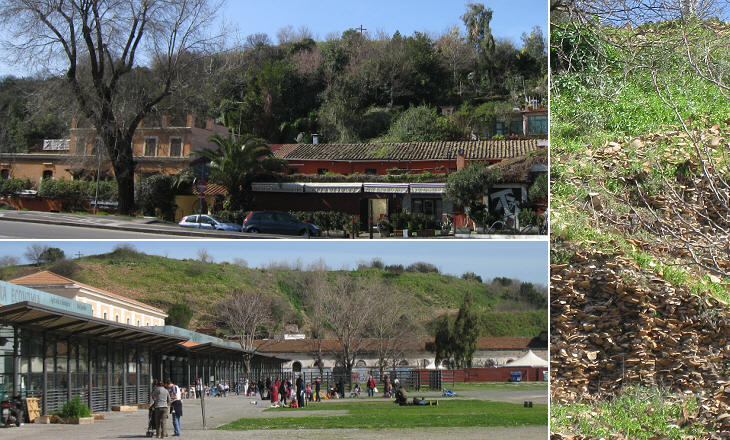 (left-above) Monte Testaccio seen from the east; (left-below) western view of Monte Testaccio from the former slaughterhouse; (right) detail showing the fragments of broken "testae" which make up the hill

I made towards St. Pauls Gate and in the way I saw on my right Hand the hill called Mons Testacius, which was made of the broken Pots thrown there in the Romans time by the Potters. Its half a Mile about, and 160 foot high.
Richard Lassels' The Voyage of Italy, or a Compleat Journey through Italy in ca 1668
Olive oil was a key commodity for the ancient Romans; apart from its use for cooking, it was utilized as fuel for the oil lamps which lit the city nights. Approximately at the time of Emperor Antoninus Pius or some time earlier, oil supplies mainly coming from Spain and Northern Africa were carried to the warehouses along the river in a particular kind of testae; unlike the most common ones (see image used as background for this page) these pots had a much rounder shape, which made reutilization of them impossible after they had been emptied of their content. 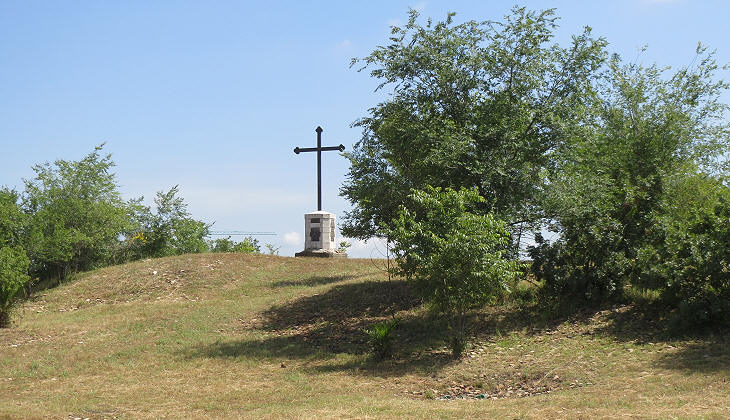 The top of Monte Testaccio with a 1914 cross

The testae were broken and piled up in an orderly fashion in an empty space behind the harbour warehouses and lime was sprinkled to stop fermentation of the oil left in the pots.
At the time of Vasi there were three crosses on Monte Testaccio because the site was used for the re-enactment of the Passion of Jesus Christ. The procession started at Palazzo di Pilato. The three crosses can be noticed in another etching. 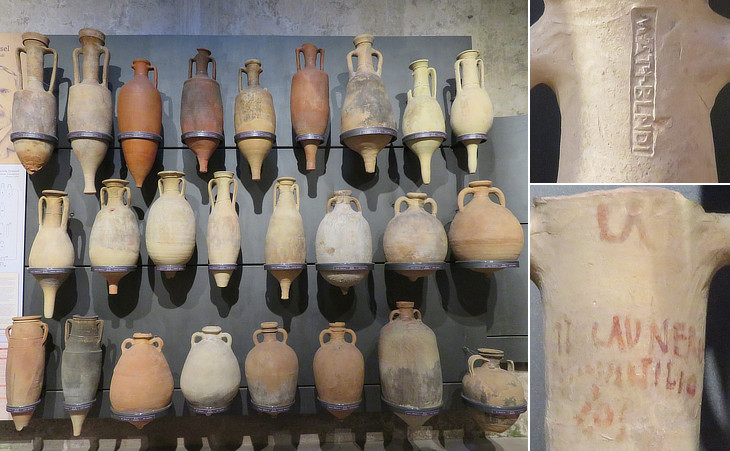 Exhibition at Mercati di Traiano: (left) "amphorae" which were found and classified by Heinrich Dressel, a German archaeologist who published a treatise on the inscriptions on Roman "amphorae"; (right) a seal and a painted label

Professor Dressel examined nearly 3,000 fabric-stamps, impressed on handles of amphorae before they were baked in the kiln, and nearly 1,000 inscriptions, written in pencil and in red or black tint on the body of the amphorae by the producers or under-writers, of ship-captains or customs officers; and the results of his examination prove that the mountain reached its actual height and size at the following dates: on the north side between the years 140 and 149 of our era; on the east side between 150 and 160; on the west side between 174 and 230. The latest date, 251, was discovered not far from the summit, on the east side, but evidently out of its original place.
Rodolfo Lanciani - Ancient Rome in the light of recent discoveries - 1890
Seals and painted labels have allowed archaeologists to identify the origin and date of the testae; records indicate that the last vases were dumped in 251, probably because after that year the storage of oil was relocated from Rome to Ostia. 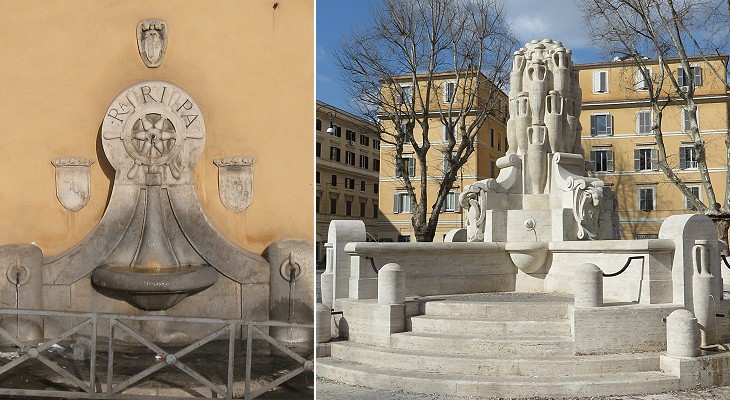 In 1921 the modern quarter of Testaccio was detached from Rione Ripa and it became a rione of its own, an event which was celebrated by a fountain showing many testae. The fountain of Rione Ripa was quite erroneously moved to Rione Trastevere. 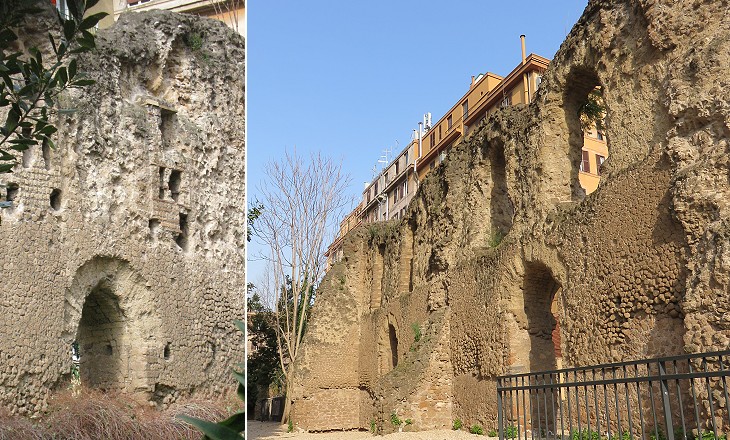 Porticus Aemilia stood behind the warehouses of the river harbour. It was a very long building (more than 500 yards) and it was divided by pillars into fifty sections each of which in turn had seven rooms. It enabled the accurate storage of all the commodities which were unloaded at the river harbour. Its initial construction is dated early IInd century BC. It was also known as Emporium (after Emporion, the Greek word for trading centre, see a page on Empuries, an ancient Greek/Roman town in Catalonia). 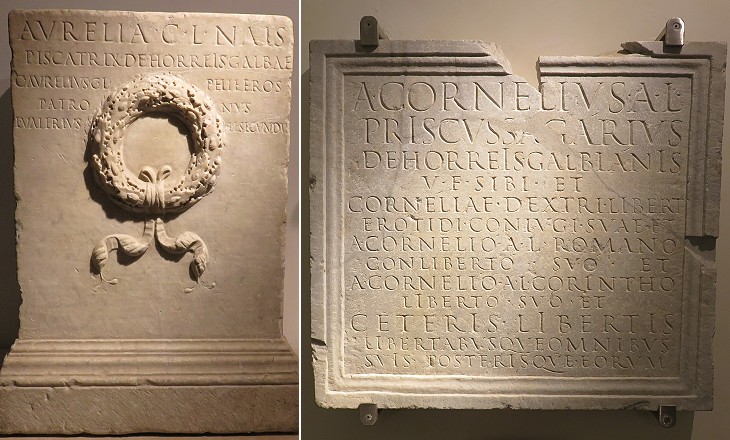 The construction of Porticus Aemilia was followed by that of Horrea Galbana a century later. Horrea means warehouses, but it also indicated a marketplace. They consisted of three long parallel courtyards with some eighty shops each. Unlike Porticus Aemilia there are no remaining standing walls of Horrea Galbana, but a number of tombs of people who worked there have been found. The ancient Romans were proud of their trade and the inscriptions on their gravestones do not tell us how pious or brave they were, but how they contributed to society, even though they did a humble job.

The Walls along the River 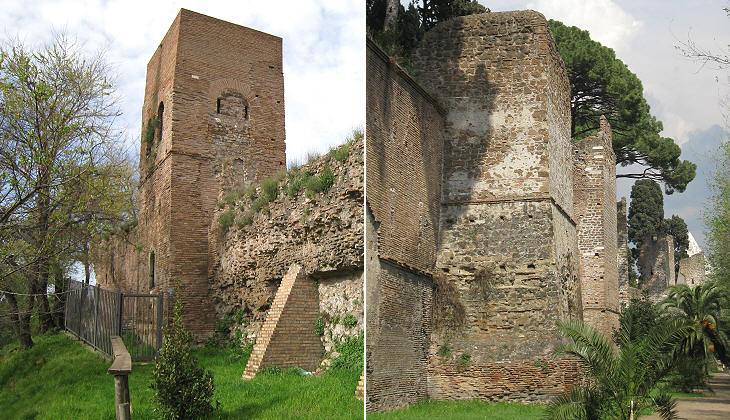 (left) The only remaining tower of the walls along the river; (right) stretch of the walls leading to Piramide di Caio Cestio

The walls along the river were pulled down when the bank was redesigned, while those leading to Piramide di Caio Cestio were preserved to a large extent; a section of them however cannot be visited because it is inside private properties. Today the walls protect the historical Protestant Cemetery of Rome and the modern Commonwealth War Cemetery.