The strict association between the Habsburgs' Empire and the Catholic faith shows up in Vienna also in the large number of sacred images on private buildings. The owners of these buildings showed not only their religiousness, but also their loyalty to the emperor. 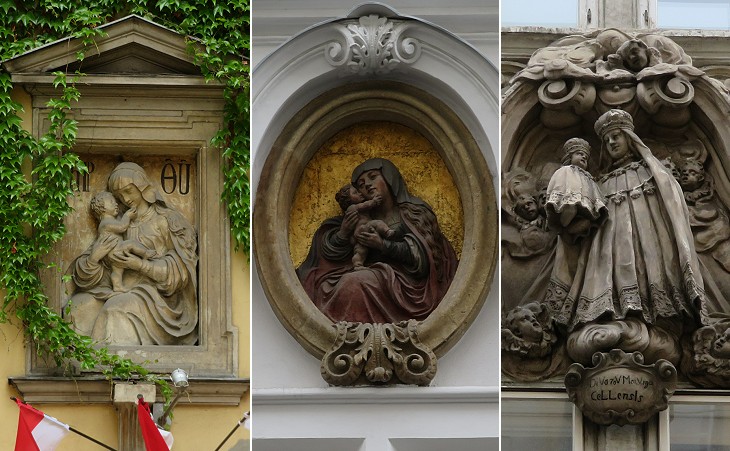 Madonnas: (left) in Wohnhaus 'Zur Mariahilf' in Fleischmarkt 9 (XVIth century); (centre) in Tuchlauben 5 (almost a copy of the previous one); (right) in Sonnenfelsgasse 3 (based on the iconography of the Infant Jesus of Prague and of Aracoeli in Rome)

As one would expect statues and reliefs showing the Virgin Mary by far exceed those portraying other saints or holy symbols, however there are not many madonnas, by this meaning the Virgin Mary with the Infant Jesus, while Rome is full of madonnelle. 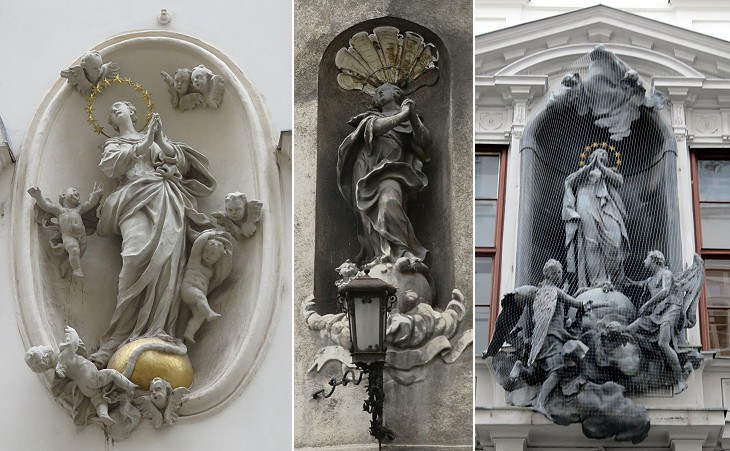 Statues of the Virgin Mary in Tuchlauben 5 (left), in Griechengasse 7 (centre) and in Johannesgasse 15 (right)

In Vienna the most frequent iconography of the Virgin Mary is that which makes reference to the Immaculate Conception. She stands over the globe (occasionally also above a moon crescent), crushing with her foot a snake which represents the original sin. She is usually crowned by twelve stars, a reference to Revelation 12:1 (A great sign appeared in the sky, a woman clothed with the sun, with the moon under her feet, and on her head a crown of twelve stars.). This iconography can be noticed also in the columns which were dedicated to her, e.g. at Piaristenkirche (and in Rome at Piazza di Spagna). 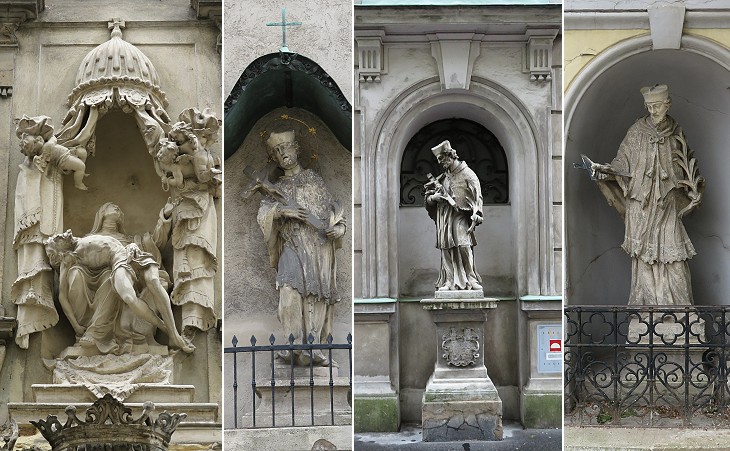 The use of stucco allowed for a very elaborate design and decoration of many sacred images; in this Deposition the scene seems to happen on the stage of a theatre (the image used as a background for this page shows the stucco decoration of a sacred image in Palazzo Panfilio in Rome).
I never in my life had so little charity for the Roman Catholick religion, as since I see the misery it occasions; so many poor unhappy women! and then the gross superstition of the common people, who are some or other of them, day and night, offering bits of candle to the wooden figures that are set up almost in every street.
Letters of the Right Honourable Lady Mary Wortley Montague: Written during Her Travels in Europe, Asia and Africa to Persons of Distinction, Men of Letters, &c. in Different Parts of Europe
Lady Montague wrote her letter in 1716; she might have seen wooden statues of John Nepomuk, because the worship of this abbot who died in 1393 was gaining ground in that period, especially in Prague. He was beatified in 1721 and canonized in 1729. 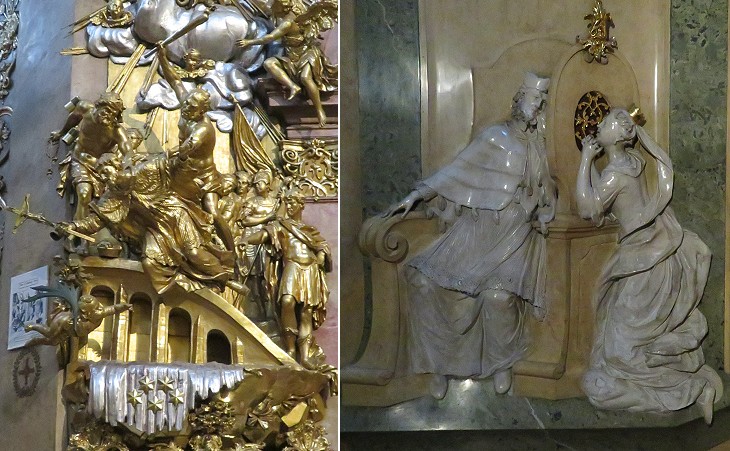 Events of the life of St. John Nepomuk were one of the recurring subjects of statues and reliefs decorating the interior of churches: the reliefs above show the martyrdom (left) of the saint who was thrown out of a bridge because he would not disclose to the king, what the queen had told him in confession (right). The Kingdom of Bohemia was a key part of the empire and therefore the Habsburgs had also a political objective in promoting the devotion to this Bohemian saint. St. John Nepomuk became the patron of those in danger of drowning and statues of him were often placed on bridges as at Limburg an der Lahn and Rome. 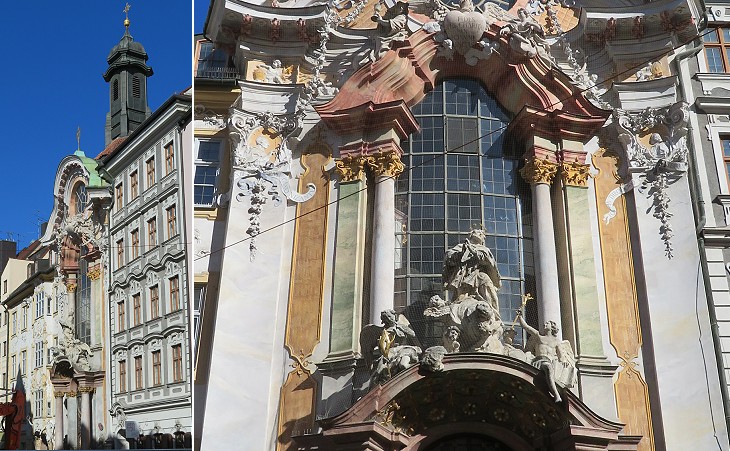 The House of Wittelsbach who ruled over Bavaria from 1180 to 1918 had close ties with the Habsburgs and the Duchy of Bavaria was a natural ally of Austria. The worship of St. John Nepomuk spread from Prague and Vienna to Munich and in 1733-1746 sculptor Egid Quirin Asam and painter and architect Cosmas Damian Asam, his brother, dedicated their private church, a masterpiece of Rococo art, to that saint. 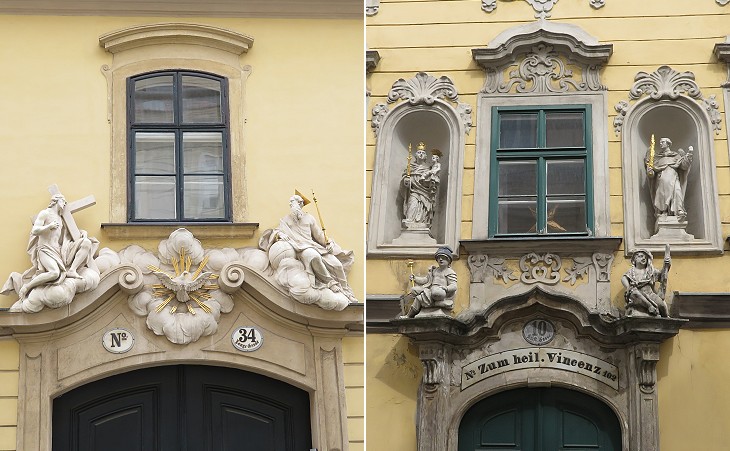 Many of the ordinary houses built in the XVIIIth century in new settlements outside the walls do not exist any longer. The remaining ones often show a very elaborate stucco decoration having a religious subject.