You may wish to see pages on Roman Ephesus first. 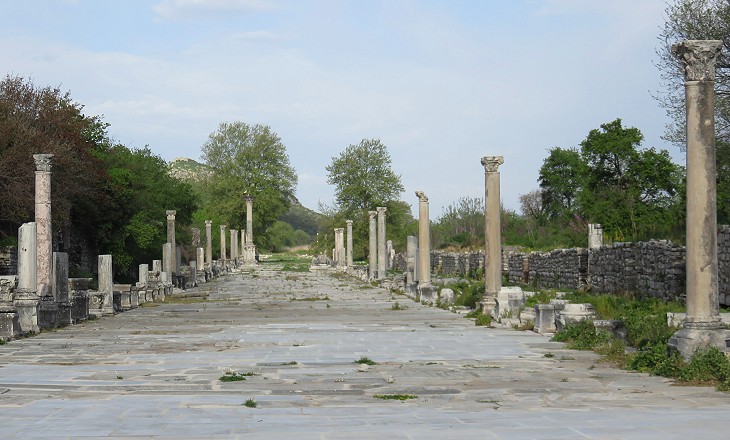 Via Arcadiana (closed to the public in April 2015)

Ephesus shows very interesting signs of the transition from the Roman to the Byzantine period. In 393 Emperor Theodosius appointed his young sons Arcadius and Honorius co-emperors: the former was assigned the eastern part of the Roman Empire, while the latter had the western one. The partition of the Empire became effective after the death of Theodosius in 395. For this reason a restoration by Arcadius of the large street between the theatre and the harbour was celebrated by dedicating it to him. It is interesting to observe that in Rome inscriptions on the gates restored by Honorius celebrated both emperors. 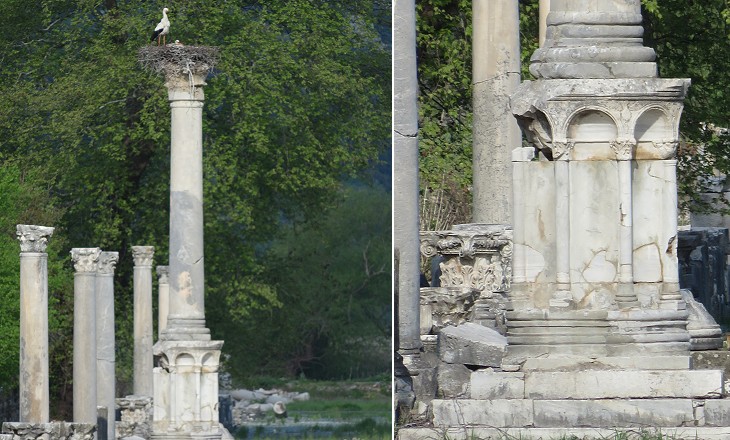 Via Arcadiana: Justinian's Column (and a stork's nest)

During the reign of Justinian, Eastern Roman Emperor from 527 to 565, five columns, taken from ancient buildings, were rearranged along Via Arcadiana: four of them supported statues of the Evangelists, while the fifth one was placed upon a high base and most likely supported a cross (the image used as background for this page shows a relief of this base). 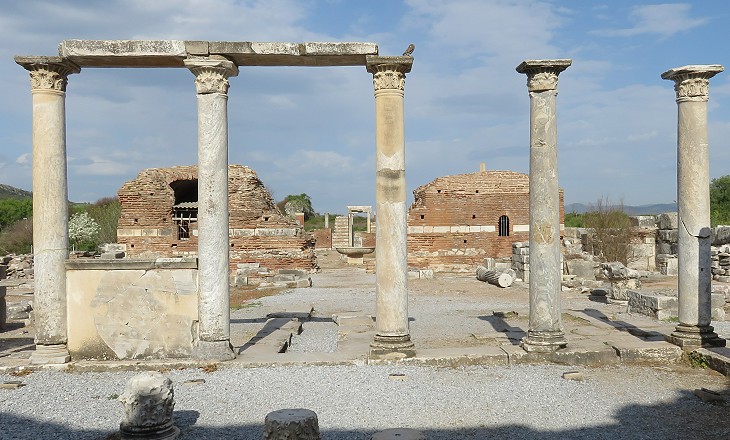 Visiting the theatre, the well-preserved stadium, and the remains of other public buildings of Ephesus, the most remarkable feature among these ruins are the massive structures near the western extremity of the town, which overlook the swamp or marsh where was the ancient harbour. The general features of this building are an immense mass of walls, forming a central corps de logis (principal block), consisting of vast substructions, chambers, dark apartments, and solid walls (..). Here, I think, must have stood the celebrated Temple of the Ephesian Diana, immediately in front of the port, raised upon a base thirty or forty feet high, and approached by a grand flight of steps, the ruins of which are still visible in the centre of the pile. Many parts of these walls, consisting of rough blocks of marble, are pierced with numerous small holes, as if they had been formerly cased with slabs of a finer marble, or even with plates of metal. Brick arches and other works have also been raised upon various portions of the walls: but this was probably done by the Christians after the destruction of the temple, and the removal of the columns by Constantine, when a church was raised upon its ruins; and we know that Ephesus was for many years an important Christian see.
William Hamilton - Researches in Asia Minor, Pontus and Armenia - 1842
Hamilton mistook the remains of a very long Roman basilica for those of the Artemision, but he was correct in noticing that the building had been turned into a church. 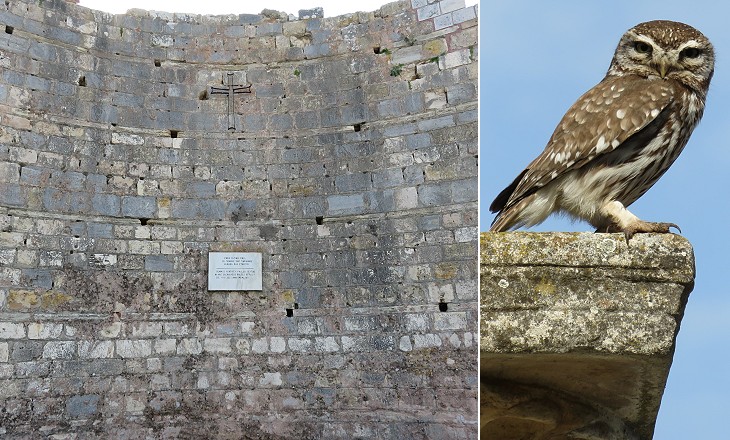 As I sat on a broken portion of a seat under the shade of the wild fennel, which grows here ten or twelve feet high, and to which spot I had been called to see a sleeping snake, Demetrius rushed in through the vomitory of the theatre, preceded by a tumult of frightened birds, to pick up an owl which he had destined for my collection.
Charles Fellows - Journal Written during an Excursion in Asia Minor in 1838 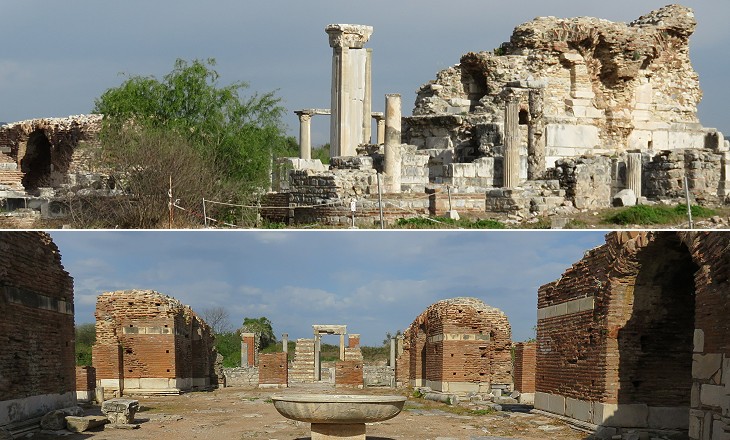 Western parts of the basilica

Maybe because Ephesus had been so important to the worshippers of the ancient gods, it was chosen in 431 and 449 to host two ecumenical councils. The 431 Council declared that Nestorianism, a doctrine stating that there were two separate persons in Christ, one human and one divine, was heretical. As a consequence the council stated that the Virgin Mary should be referred to as Theotokos (Mother/Birth-Giver of God), rather than Christokos (Mother/Birth-Giver of Christ) as suggested by Nestorius, Patriarch of Constantinople. 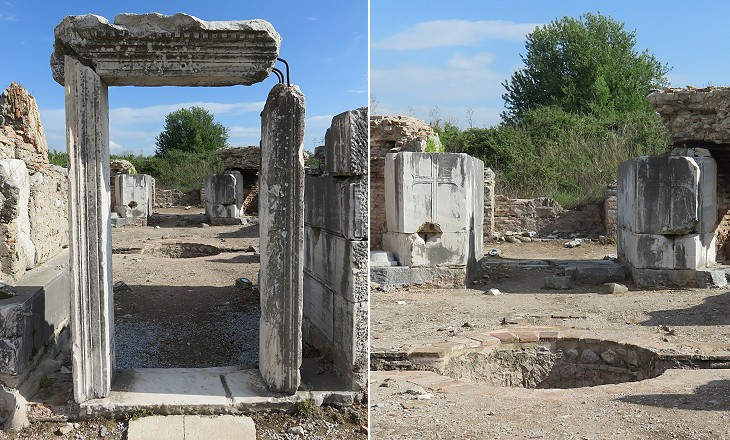 The councils were held inside a long Roman basilica, located near the harbour, which most likely was used as a covered market: in the early Vth century some of its buildings had been turned into a church with a separate octagonal baptistery. The ceremony required the full immersion of the neophyte and the steps leading down to the sunken receptacle are still visible. 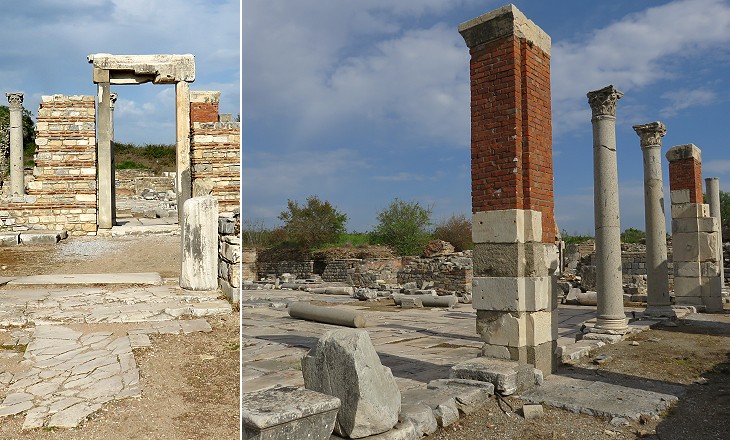 The Second Council of Ephesus, similar to the First one, dealt with the nature of Christ. It was marred by so fierce theological and personal contrasts that eventually its outcome was nullified and another council was convened at Chalcedon, near Constantinople in 451. That council condemned Monophysitism, a doctrine stating that there is only one inseparable nature (partly divine, partly and subordinately human) in the person of Christ. The condemnation of Monophysitism led to a major schism which weakened the Byzantine Empire. 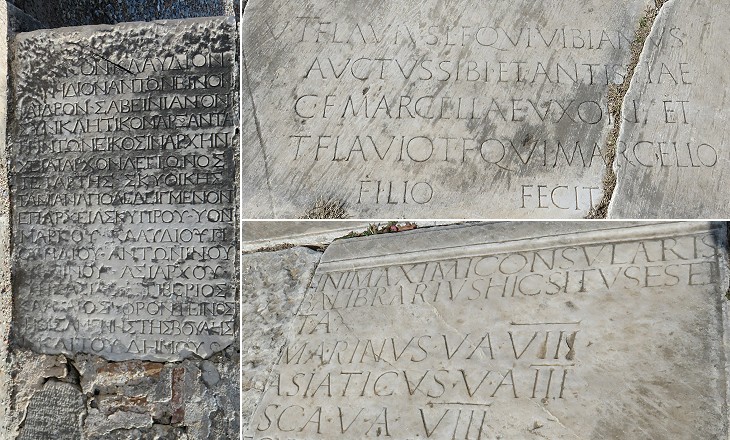 Pavement of the Western Hall: (left) Greek inscription celebrating the support given by Publius Vedius Antoninus (who built the Odeon and a Gymnasium) to the Parthian campaign of Emperor Lucius Verus; (right) Latin funerary inscriptions by T(itus) Flavius Vibianus Auctus for self and family (above) and by C(aius) Stertinius Orpex for his children (below)

In 427 Emperor Theodosius II issued a decree prohibiting the depiction of the Cross on the pavements of the church, because walking over that Christian symbol was tantamount to a sacrilege. At approximately the same time a large hall of the Council church at Ephesus was paved with marbles taken from monuments and tombs. Their inscriptions were not placed facing the ground, but instead in a way that people would walk over them. They did not celebrate the ancient gods, but local benefactors or they piously commemorated the loss of relatives.

Some of the inhabitants of Ephesus lived near the Artemision, which was located a couple of miles out of town. The sanctuary was surrounded by facilities for the visitors such as inns, baths, shops and by the houses of those who worked there. In the IIIrd century AD for the first time barbarian tribes (the Heruli and the Goths) managed to cross the borders of the empire and to raid the Province of Asia. These raids became more frequent in the following centuries and gangs of local brigands increased the risk of living near the Artemision. The site was abandoned in favour of a more defendable nearby hill (Ayasoluk). The ancient sanctuary was dismantled stone by stone (in a process which lasted centuries) and its columns, reliefs, entablatures and arches can be seen in the walls and buildings of Ayasoluk.

Persecution Gate in 2006 and in an early XIXth century print

Emperor Justinian, as if to compensate the Ephesians for the economic loss due to the closure of the Artemision, decided to build a cathedral not far away, on the assumed tomb of St. John the Evangelist and Apostle (aka the Theologian).
The gate leading to the church was most likely the result of relocating there the entrance to a Roman building. A section of the frieze which decorated it portrayed Achilles killing an enemy, but eventually it was thought to depict a gladiator killing a Christian martyr, hence the name given to the gate. 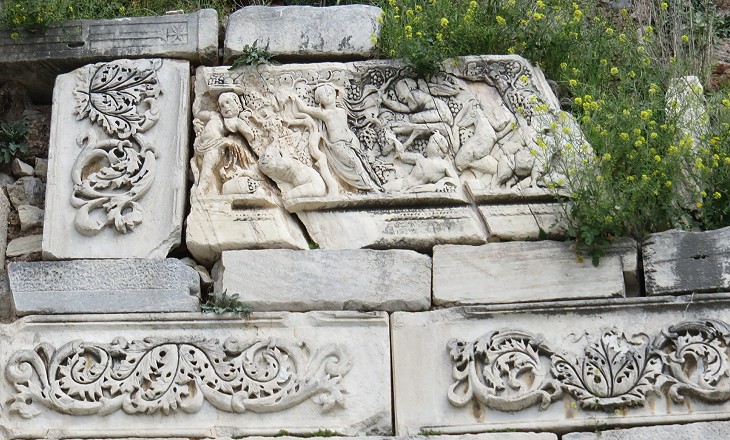 A côté sont des bacchanales d'enfants jouant avec des grappes de raisin. (At the side - of Achilles' relief - are infants playing with bunches of grapes).
Marie Gabriel Florent Auguste de Choiseul-Gouffier, French Ambassador to the Sultan - Voyage pittoresque dans l'Empire Ottoman - 1782
The sculptures which adorned the gate called the Gate of the Persecution, were clearly only parts of sarcophagi. The two principal were clandestinely removed several years ago, and after passing to Smyrna, Malta, and, I believe, England, are now in Russia, having been purchased by the present proprietor for a very large sum.
Francis Vyvyan Jago Arundell - Discoveries in Asia Minor - 1834
The adventurers who brought the fragments to this country deposited them at Mr. Christie's auction rooms where they were purchased by Sir G.O.P. Turner of Battlesden and at his sale were bought by the Duke of Bedford (to whom they still belong).
J. D. Parry - A Guide to Woburn Abbey - 1831 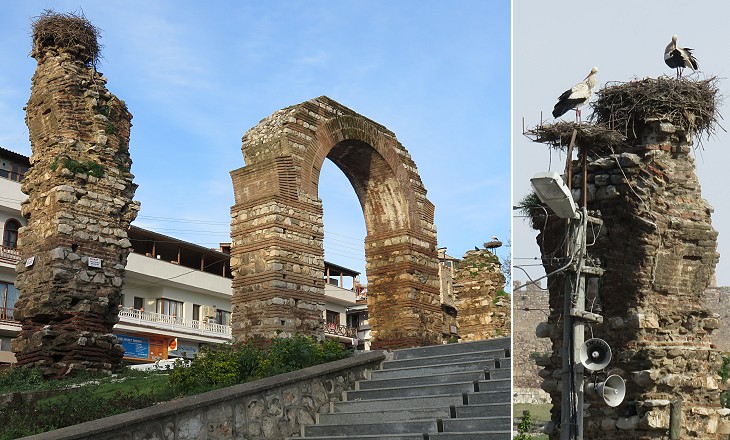 Remains of a Byzantine aqueduct housing a stork's nest

Leaving Aiasaluck and passing to the east of the hill our road led us close to the long aqueduct which once supplied this place with water. It consists of many lofty slender piers of marble supporting the remains of brick arches. In the marble piers many Greek and Latin inscriptions are to be seen, such blocks of marble appearing to have been especially selected by the builder. W. Hamilton 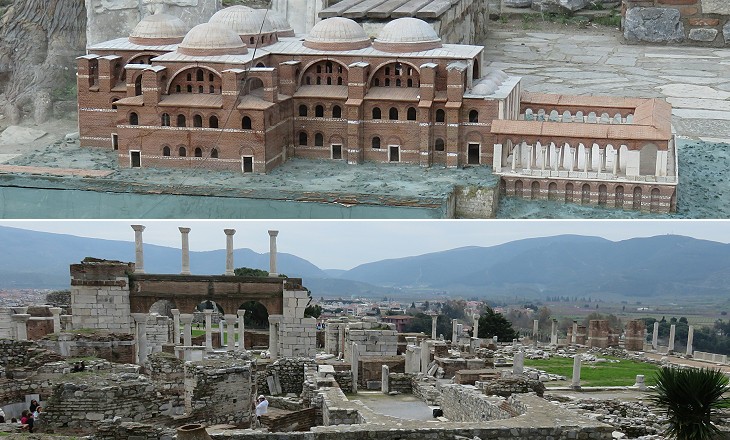 (above) Model of the Cathedral; (below) actual view from the road to Ayasoluk. Both images show the church from the same point of view with the large atrium on the right (western) side

I think it more probable that it stood at Aiasaluk, and perhaps the gate called the Gate of Persecution, and the large masses of brick walls beyond it, are parts of this celebrated church, which was clearly in a commanding situation (..). The earlier church was a very small one, but was rebuilt by Justinian on the same site, and was so magnificent as to equal the church of the Apostles at Constantinople. (..) There is positive evidence that the church stood either at or near the great mosque, for I saw several very large Corinthian capitals, one within the court of the mosque, and others on the hill just behind it, having a cross in high relief upon them, evidently from the church of Justinian. F. Arundell

St. John's Cathedral from the atrium

The cathedral was a very large basilica divided into three naves with an apse at its eastern end. The red and white masonry reminds the viewer of the walls of Constantinople owing to the typical Byzantine practice of alternating layers of stones or marbles and layers of bricks.

(left) Columns of the atrium and the Fortress of Ayasoluk in the background; (right) a sort of small chapel in the church building

St. John's Cathedral attracted pilgrims and contributed to the growth of Aghia Theologos, as the small town around the building was most likely known (eventually the name was turned into Ayasoluk/Selçuk). A factor which greatly reduced the population of the region was a pestilence recorded as the Plague of Justinian. The initial outbreak originated in Egypt and then the plague spread to port cities around the Mediterranean; the exact population loss is difficult to assess, but it was very significant and it greatly weakened the Byzantine Empire.

(left) Byzantine pluteus; (right) capital with a "pulvino" decorated with a monogram

In St. John's Cathedral a screen separated the aisles from the choir: it was made of plutei or transennae, marble slabs decorated with a very light relief, usually of a simple albeit elegant design. These plutei are peculiar to Byzantine art as well as the simple and low capitals which supplemented those taken from the Artemision. 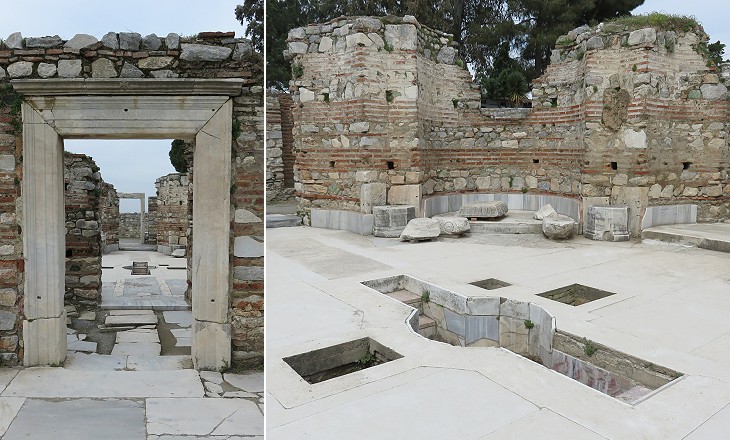 Baptism had an enormous importance for the early Christians. It was administered in a separate building or in a section of the church at its entrance. The reconstruction of the complex indicates that the octagonal baptistery at St. John's was accessed by those who were to be baptized from the atrium. After the ceremony they left it through an exit which led to the church. 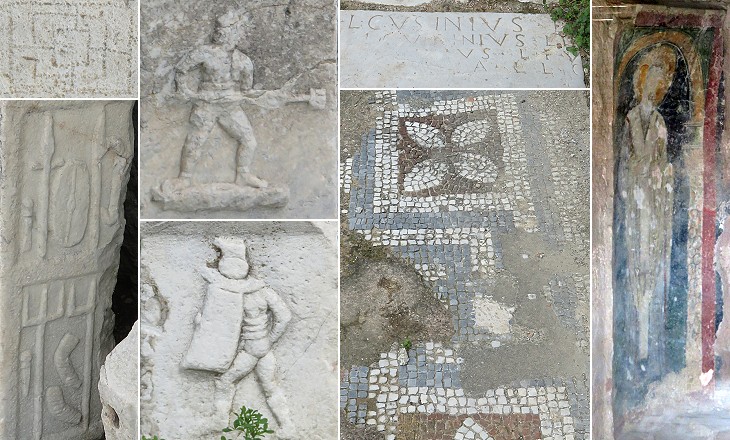 Miscellany of ancient and Byzantine carvings, gravestones, mosaics and frescoes at St. John's