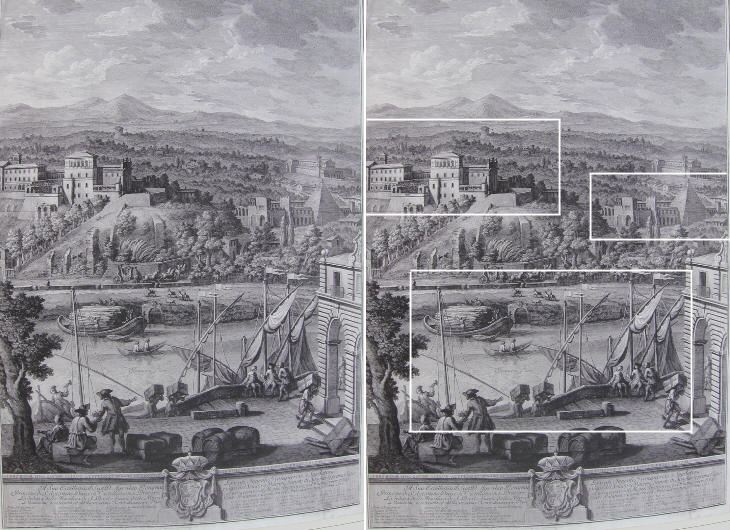 The choice of Campo Vaccino and of the Vatican as the subjects of the two 1765 etchings was consistent with the approach followed by Vasi in his ten books of etchings aimed at showing the magnificence of both ancient (Campo Vaccino) and modern (the Vatican) Rome. For the 1771 etchings Vasi chose areas of Rome which were not visible in detail in the Grand View of Rome. The lower part of the etching shown above contains a long dedication to Agesilao Bonanno, a Sicilian baron, who was very powerful in that part of the island where Vasi was born (Corleone, near Palermo).

Agesilao Bonanno is mainly remembered for having levied a tax on doors and windows; Bonanno (Italian for Goodyear) is a common surname in Sicily and a "Joe" Bonanno (1905-2002) was a Sicilian-born American Mafioso who became the boss of one of the New York City crime families.
It is worth noting the long list of surnames of Vasi's patron, an effect of the long Spanish rule on the island.

Vasi placed between the etching and the dedication a long sentence by the historian Plutarch (46-127).

View of the bell tower of S. Alessio and of S. Maria del Priorato: the round tower in the background is Sepolcro di Cecilia Metella

Vasi showed S. Maria del Priorato, the church of the Knights of Malta, both in a section of the Grand View and in one of the plates of Book V, but in both etchings the details of the church were not clearly visible: this 1771 view is of great interest because it shows the church after the 1765 changes made by Giovan Battista Piranesi and before the damage caused to the upper part of the church in 1849 when it was hit by a French cannon during Garibaldi's Defence of Rome. 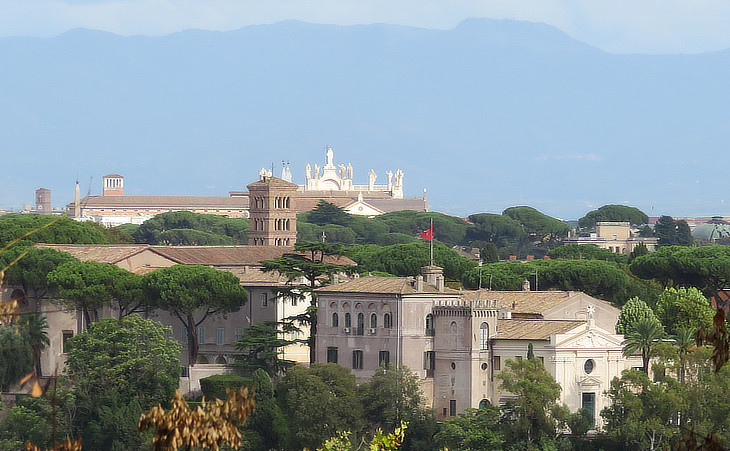 View of the Aventine from Villa Sciarra

The comparison with an actual view of S. Maria del Priorato and of the Aventine Hill suggests that Vasi designed the etching based on sketches made in late afternoon towards the end of June: the shadows in the print indicate a position of the sun which occurs only during the weeks close to the summer solstice.
The flag (white cross on a red background) on the building next to the church (Villa Magistrale) indicates that the location is under the jurisdiction of the Sovereign Military Order of Malta.

This section of the etching shows a nice view of the walls between Porta S. Paolo and Monte Testaccio: there is no evidence of the Protestant Cemetery which already existed next to the walls.
In the corresponding section of the Grand View of Rome Vasi showed just a few buildings along the street leading to Basilica di S. Paolo; in this etching the area seems much more populated and Cappella dei SS. Pietro e Paolo is more clearly detailed; it was a small church on the assumed site where the two apostles parted company before their martyrdom.

The opening in the walls between Piramide di Caio Cestio and Porta S. Paolo

In 1888 the expansion of Rome led to the pulling down of a section of the ancient walls to the east of Porta S. Paolo (far right in the photo): this allowed tramways to link the city with a new industrial development and the neighbouring quarter called Garbatella. In the XXth century the development of private motorization caused the pulling down of the section of the walls between the gate and the pyramid.

(left to right) Inscription on the walls near Piramide di Caio Cestio celebrating the 1944 liberation of Rome; inscription near the site of the small chapel located midway between Basilica di S. Paolo and Porta S. Paolo; (Centrale Montemartini) the power plant built on that area is now a museum

The anonymous modern road linking the gate with the basilica is one of the least interesting parts of Rome with the remarkable exception of Centrale Montemartini, a former power plant where some ancient statues belonging to the City of Rome have been relocated: it is a very interesting blending of industrial and traditional archaeology. 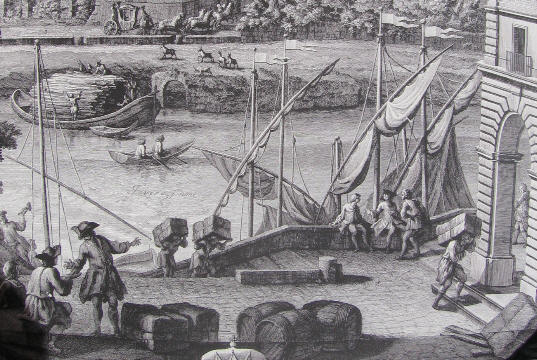 Vasi had a grand vision of Rome: his etchings were aimed at illustrating the monuments of ancient and modern Rome: he paid little attention to showing the everyday life of the Romans. The tastes of his customers however were changing slightly: foreign travellers came to Rome (and Italy) not only to ponder on the ruins of its ancient buildings or to pray on the tombs of the martyrs: they were also looking for what can be called Italian colour, a theatrical, outdoor lifestyle. It is interesting to remark that while Vasi and Piranesi in the XVIIIth century acquired worldwide fame with their views of the monuments of Rome, Bartolomeo Pinelli (1771-1835), a Roman engraver of the early XIXth century became famous for his illustrations of the costumes of the Romans, their games, their serenades; his prints portraying the Roman brigands were particularly praised.

This may explain why in this late etching Vasi gave so much room to the activity at Porto di Ripa Grande, the main river harbour of the city; however the scene he portrayed was conventional and the workers were too neatly dressed to meet the expectations of travellers in search of Roman colour.

A major flood of the Tiber occurred in December 1870, right after the annexation of Rome by the Italian State. The government decided to protect the city by building high walls along the river and by enlarging its bed. In the same historical period the development of a modern railway system made the traditional use of the river to supply Rome look obsolete. For these reasons the river harbours of Ripetta and of Ripa Grande were demolished.