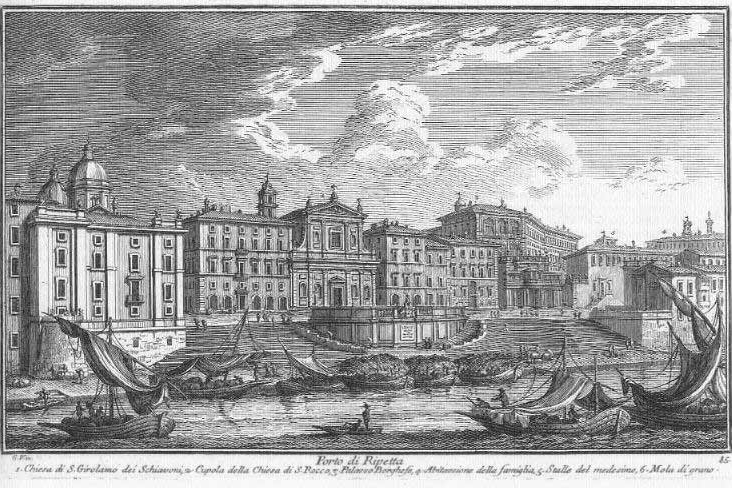 In this 1754 etching Giuseppe Vasi shows how much care he employed in depicting all the architectural details of the buildings behind Porto di Ripetta, the river harbour where commodities coming from Sabina and Umbria were unloaded; his representation of port activities lacks liveliness, because he shows the steps leading to the river almost empty of people in order to exactly depict them. A contemporary etching by Giovanni Battista Piranesi shows the harbour in full activity (it opens in another window).
The view is taken from the green dot in the small 1748 map here below. In the description below the plate Vasi made reference to: 1) S. Girolamo degli Schiavoni; 2) Dome of S. Rocco; 3) Palazzo Borghese; 4) Buildings for the servants of the Borghese family; 5) Stables of the Borghese family; 6) Mill. 1), 2), 4) and 5) are shown in other pages. The small map shows also 7) Porto della Legna and (in an enlargement) 8) Porto di Ripetta. 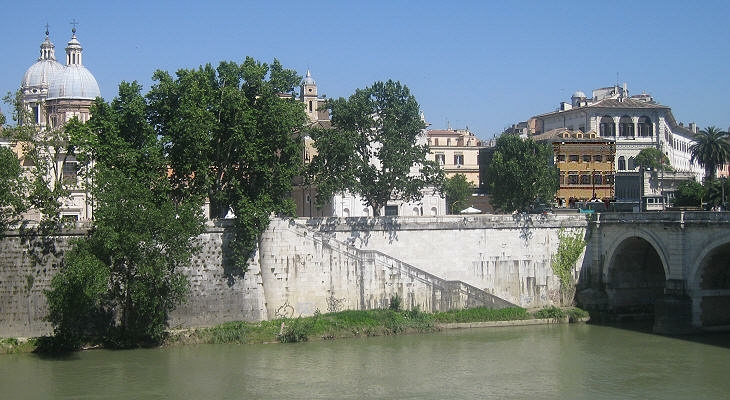 The construction of walls along the river to prevent floods in the late 1880s and that of Ponte Cavour in 1898-1901 to link Prati, a new development on the right bank, with the rest of the city led to pulling down Porto di Ripetta; also the buildings at the sides of S. Girolamo degli Schiavoni and those on the river front were demolished. 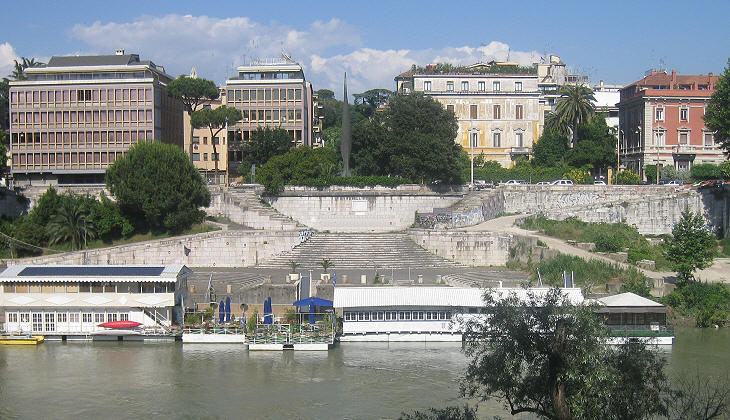 An almost exact replica of Porto di Ripetta was built a mile to the north of the original location on a site which at the time was outside the city; it is named after Francesco de Pinedo who landed on the Tiber in a small seaplane after a long-distance flight. A sort of bronze obelisk was erected in 1974 on the place where in 1924 Giacomo Matteotti, an Italian MP, was kidnapped and subsequently killed by Fascist supporters. 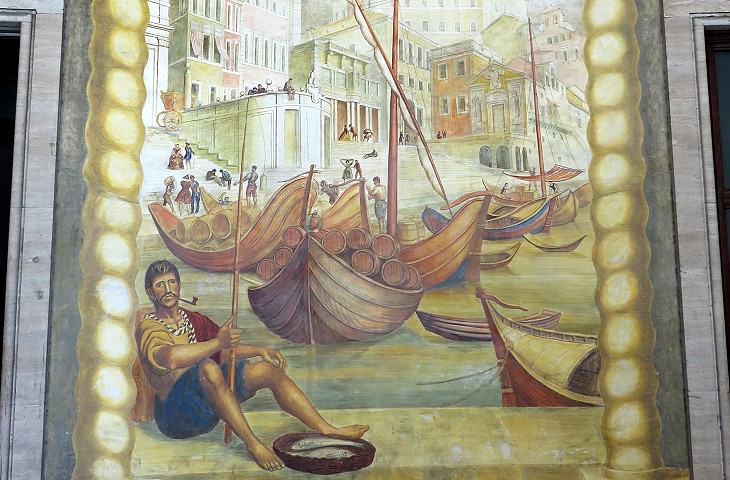 At the very beginning the river harbour of Ancient Rome was at Velabro, but with the expansion of the city small ships coming from the sea were unloaded at today's Testaccio, while boats coming from the Tiber valley were unloaded at Campo Marzio at a river bend which facilitated operations. During the Middle Ages the harbour of Testaccio was replaced by that of Ripa Grande (opposite it), whereas that of Campo Marzio continued to be used and it acquired importance when Pope Leo X opened Via di Ripetta, a street which linked it with Piazza del Popolo. It was called di Ripetta (small bank) because the harbour was of lesser size than the other one. 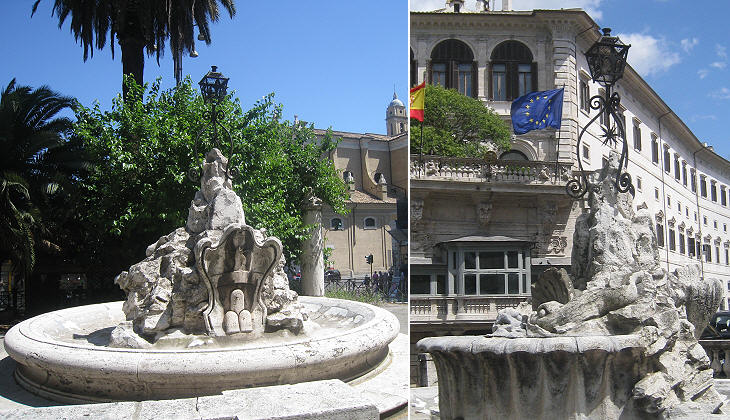 As for the Tyber, it is, in comparison with the Thames, no more than an inconsiderable stream, foul, deep, and rapid. It is navigable by small boats, barks, and lighters; and, for the conveniency of loading and unloading them, there is a handsome quay by the new custom-house, at the Porto di Ripetta, provided with stairs of each side, and adorned with an elegant fountain, that yields abundance of excellent water.
Tobias Smollett - Travels through France and Italy in 1765
In 1703 Pope Clement XI commissioned the construction of new facilities at Porto di Ripetta; the steps were designed by Alessandro Specchi and are regarded as forerunners of Scalinata di Trinità dei Monti (Spanish Steps); they were paved with travertine blocks which had fallen from Colosseo because of an earthquake.
A fountain having the shape of the heraldic symbols of Pope Clement XI (three mountains and a star) was placed in the small central terrace of the steps; it was flanked by two columns where the heights reached by the worst floods were recorded (the image used as background for this page shows the marks for the 1495 and 1660 floods); because the fountain and the columns have been relocated to a higher position the marks are no longer accurate. The fountain is a work by Filippo Bai, a sculptor who was also involved in the execution of the rocks of another fountain commissioned by Pope Clement XI near S. Maria in Cosmedin. 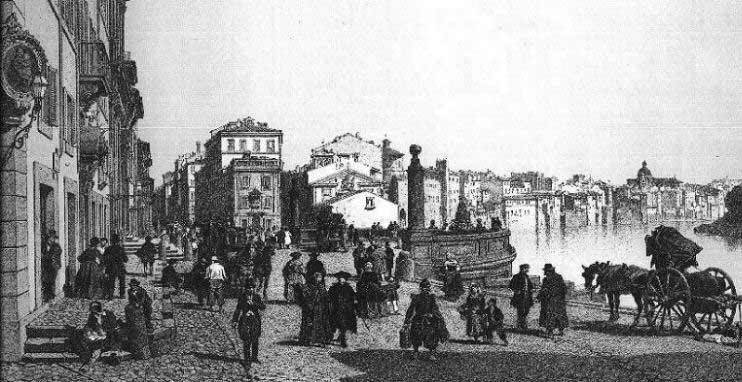 The development of railway greatly reduced the importance of the harbour before it was demolished. 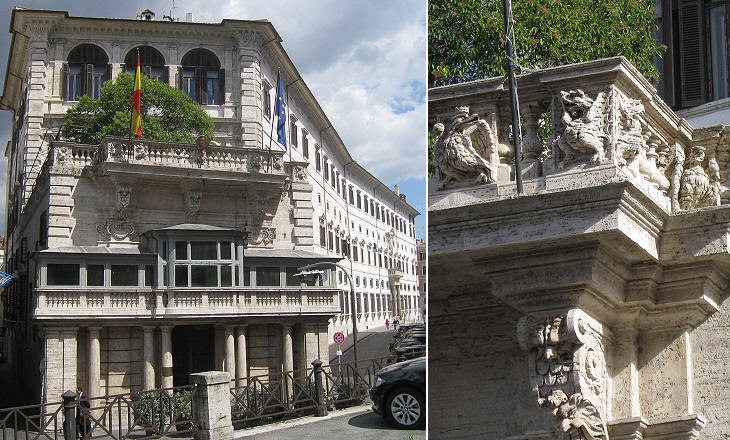 The "Harpsichord" is the name given to Palazzo Borghese because of its overall shape; its small side facing the river is called the keyboard; it was the last section of the palace to be built and it was designed by Flaminio Ponzio in 1612-1614; some changes were made in 1671-1678 by Carlo Rainaldi. The decoration heavily relied on the Borghese heraldic symbols (eagles and dragons). This section of the palace houses the Spanish Embassy to Italy, whereas Palazzo di Spagna houses that to the Holy See and the residence of the ambassador is at Casino Giraud. 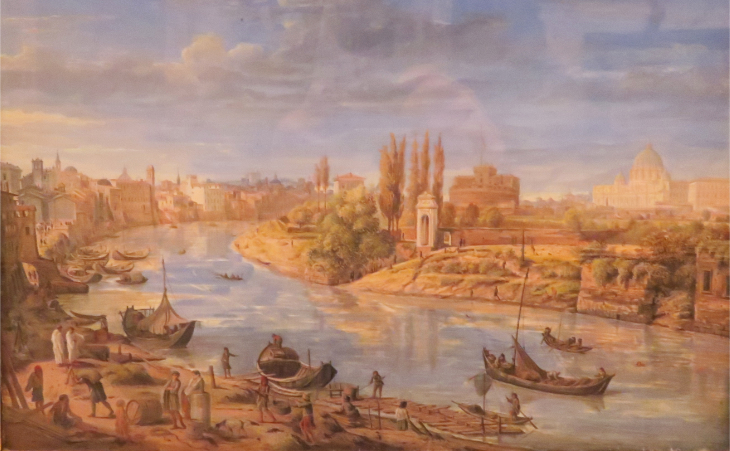 Wood was an important commodity which reached Rome from the Tiber valley; wood for burning was unloaded and stored in a separate harbour (Porto della Legna) which was located slightly upstream of Porto di Ripetta; building timber was unloaded at a warehouse near Porta del Popolo. 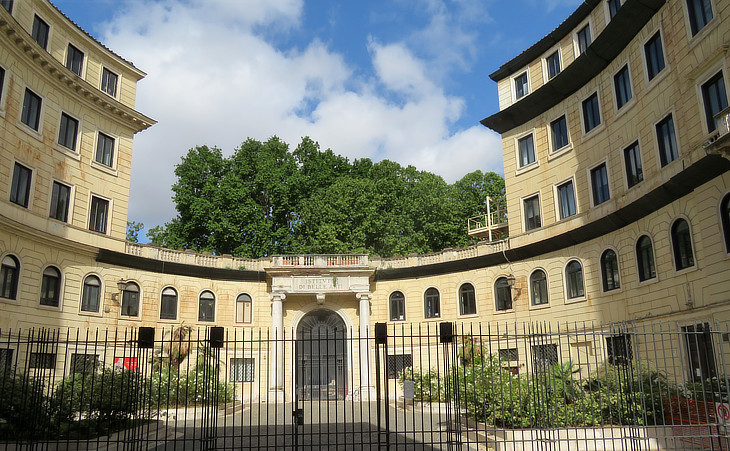 During the pontificate of Pope Gregory XVI the facilities for the unloading and storing of timber were moved out of town to make room for a short promenade along the river. A large horsehoe building was erected between the promenade and Via di Ripetta opposite S. Maria in Porta Paradisi. In 1861 it was modified to house the Roman Academy of Fine Arts which initially was under the supervision of Accademia di San Luca, the guild of the Roman artists.