Palazzo del Quirinale was initially built towards the end of the XVIth century as a summer residence for the popes, because of its position at a certain distance from the River Tiber, which reduced the risk of contracting malaria, and on a hill which enjoyed to a great extent the breeze which at sunset tempers the heat of the Roman summer days.
Enlarged and embellished by several popes, with Pope Clement XII (1730-1740) the palace became the official residence of the Pope. When the Italian troops arrived on September 20, 1870, Pope Pius IX, while claiming the illegitimacy of the Italian occupation, preferred to retire to the Vatican. The Quirinale, as the palace is commonly called, then became the residence of the King of Italy and after 1946 of the President of the Republic.
Every decent Italian sees in the palace a symbol of the Nation and when he/she reaches its entrance, decorated with the eagles of the Borghese, the statues of St. Peter and St. Paul, the cross of the Savoia royal family and the Italian and European flags, he/she feels compelled to start humming the national anthem, but...

... the stateliness of the portal designed in 1615 by Carlo Maderno for Pope Paul V Borghese is interrupted by a tiny irreverent mask almost hidden in a little case below the inscription celebrating the completion of the portal itself.
The domes of its churches, the obelisks and the fountains of its squares, the statues of saints, angels and virtues, the gigantic coats of arms of the popes and the inscriptions celebrating their achievements all contribute to the grandeur and pomp of Rome. But those same popes and artists who wanted and designed these monuments included a sort of antidote against their works being taken too seriously: a laughing mask was very often hidden in works of art designed between 1550 and 1750.
The image you see in the background of this page shows a mask hidden in a fountain designed by Giovanni Vasanzio for Pope Paul V. 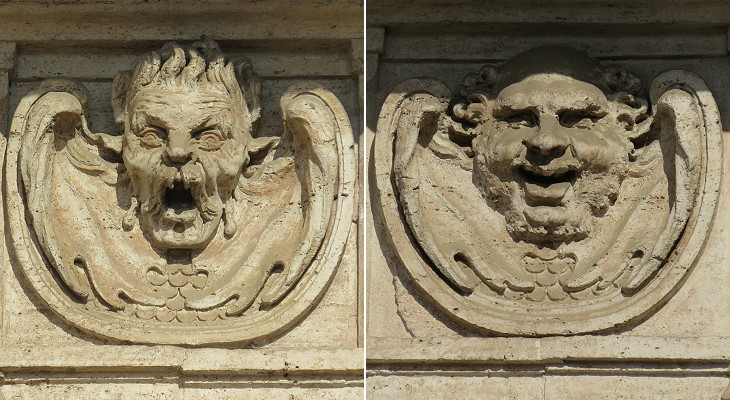 Bernini decorated Palazzo Barberini with a traditional frieze, but while the triglyphs are designed according to the canons of classical architecture, the reliefs of some metopes are pretty unusual: they portray masks in different moods in a frame of bat wings: it is difficult to understand why in a palace meant to testify to the glory of the Barberini, both the family and Bernini agreed to include these reliefs, but one has to remember that Apollo and Daphne, the most celebrated statue by Bernini, is a metaphor of illusion, of the possibility of something not being what we believe it is.

Bernini often hid masks in the lower part of a coat of arms. The eight coats of arms he designed for the baldaquin in S. Pietro all have masks in different attitudes. He personally sculpted the laughing mask of the coat of arms of Pope Innocent X in Fontana dei Quattro Fiumi. Bernini hid a slightly mysterious mask, maybe an Egyptian prince, in the pedestal he designed for Obelisco della Minerva.

Masks hidden in coats of arms of Pope Clement IX in Banco di S. Spirito, Pius IX in Scuderie del Quirinale, the Borghese family in a palace near Palazzo Borghese

Many other coats of arms show hidden masks: they can be seen not only in the coats of arms designed during the Baroque period, but also in those of the XIXth and XXth centuries. 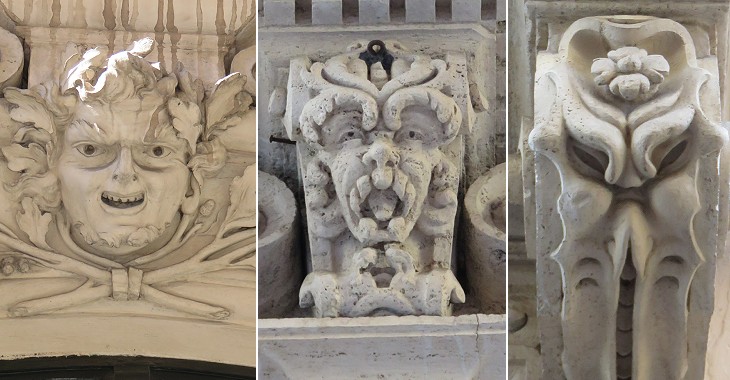 The portal of Palazzo del Quirinale is not the only one to be decorated with a mask. In some cases, rather than being hidden, they constitute the main decoration of the portal. Palazzo Cerri has a very strange mask which portrays a man in the act of waking up and yawning: in addition to the mask at the centre of the portal the folds of the lateral decorations design a threatening face. 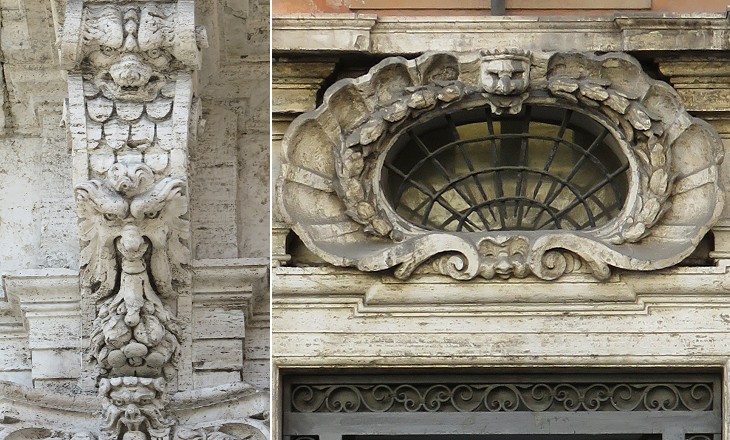 One is not enough! Masks in the terrace of Palazzo Borghese and in a building next to S. Bartolomeo dei Bergamaschi

Occasionally one mask was not thought to be enough. Flaminio Ponzio who designed in 1612-1614 the side of Palazzo Borghese overlooking the Tiber included three masks in the corbels supporting the balcony. While the central and the lower masks can be seen from all viewpoints, the upper one can be noticed only from below.

Even churches were decorated with masks, although they could hardly be considered a Christian symbol.
The masks are usually ignored in the description of the monuments of Rome, nevertheless they contribute to make more human a city which has an excess of sanctity and glory. 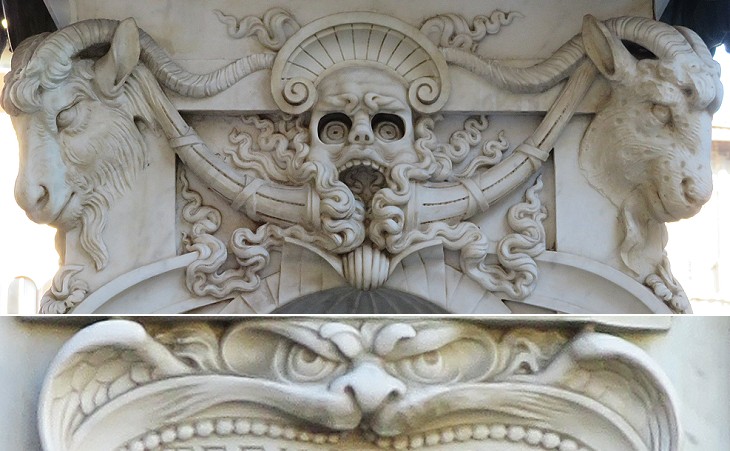 Masks on the pedestal of Cellini's Perseus in Florence

You may wish to see a page on similarities between the monuments of Rome and those of Florence.