Chiesa di S. Marcello
(Vasi at work in the Grand View of Rome) 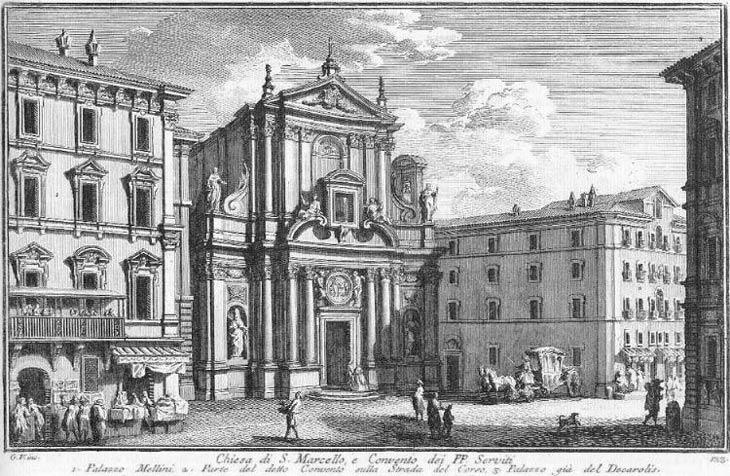 This is one of many plates by Giuseppe Vasi covering Via del Corso. In 1756, when this etching was published, the street was a shopping area for the rich and the foreigner as it is today. Cardinal Mario Mellini who had recently restructured the palace to the left of the church, thought it wise to ask Tommaso de Marchis, the architect in charge, to plan for some shops. One of them was rented by Bouchard & Gravier, French booksellers (a Joseph Bouchard had a bookshop in Florence and another Bouchard is recorded in Bologna; the Gravier had shops in Naples and Genoa). In the image used as background for this page you can see a detail of the etching showing potential customers looking at some plates, maybe those by Giovanni Battista Piranesi, because Bouchard & Gravier was the publisher of that artist's works (see the frontispiece of a book by Piranesi - it opens in another window).
The view is taken from the green dot in the 1748 map below. In the description below the plate Vasi made reference to: 1) Palazzo Mellini; 2) Part of the Monastery of the Servite Order; 3) Palazzo De Carolis. 3) is shown in another page. The small map shows also 4) S. Marcello; 5) Oratorio del SS. Crocifisso; 6) Palazzo Alli Maccarani; 7) Palazzo Maccarani. 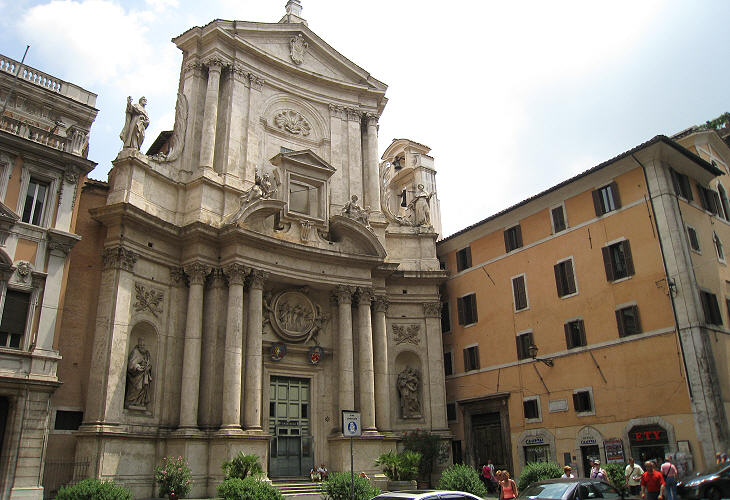 At first sight the church and the adjoining monastery do not show changes; however the entrance to the monastery is not the original one. It has a XVth century appearance as it was designed for the palace built by Cardinal Giovanni Michiel, nephew of Pope Paul II, before 1490 and which eventually became Palazzo Mellini; when the palace was redesigned in the XVIIIth century the portal remained. In 1912 however Società Generale Immobiliare, the building society which bought Palazzo Mellini in 1909, decided that the historical portal was an obstacle to changes it wanted to make. The Servites accepted to relocate the portal at the entrance to their monastery, in memory of the benefits they received from Cardinal Michiel.

(left) Detail of the portal bearing the erased coat of arms of Cardinal Giovanni Michiel; (right) inscription inside a typical frame of Ancient Rome: "IO(hannes). CAR(dinal). S. ANGELI EPS. VERONEN(sis)", a reference to the fact that Michiel was titular cardinal of S. Angelo in Pescheria and Bishop of Verona 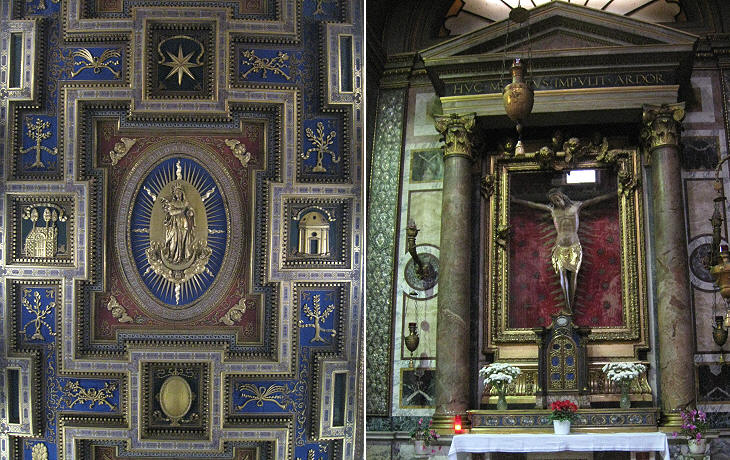 (left) 1592 ceiling by Carlo Lambardi, similar to that at S. Maria in Aracoeli, with a relief showing the Virgin Mary (the Servites are also known as Servants of Mary); (right) crucifix which was not burnt by fire in 1519

The historical evidence about Pope St. Marcellus I is very limited: according to tradition Maxentius sentenced him to work in the catabulum, the first staging post along Via Flaminia (of which Via del Corso is the urban section); in the Vth century a religious building dedicated to him is recorded; in the XIIth century a church was built on the site of today's S. Marcello, but with the opposite orientation; in 1369 it was assigned to the Servites, an order founded in Florence in the previous century. In 1519 the church was destroyed by fire, with the sole exception of a chapel dedicated to a XVth century wooden crucifix, which became the object of a special devotion. The reconstruction of S. Marcello lasted for almost a century. 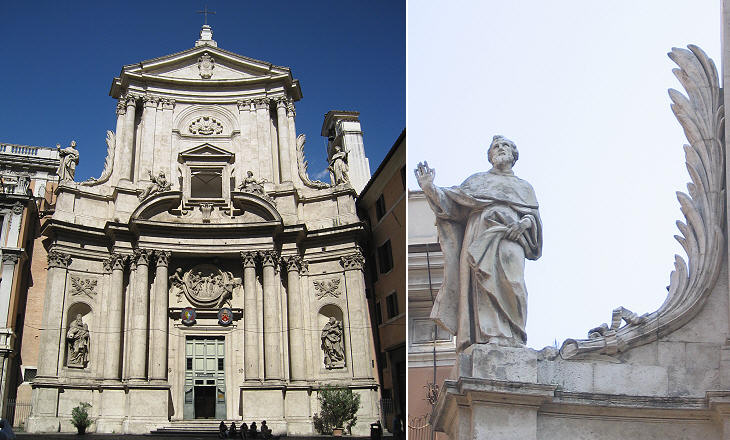 (left) Façade; (right) Blessed Gioacchino Piccolomini by Andrea Fucigna (1703), one of the many statues close to Heaven of Rome

Carlo Fontana, born in 1634 near Como, in Rome before 1655, was the man on whose shoulders fell the mantle of the great High Baroque architects. (..) His manner is fully formed in the façade of S. Marcello al Corso, probably his most successful work, which impressed the younger generation of architects very much. This facade must be regarded as a milestone on the way to Late Baroque Classicism; it is, in fact, separated by a deep gulf from the great High Baroque facades, despite the use of such devices as the concave curvature and the illusionist niche of the upper tier. Here everything is unequivocal, proper, easily readable.
Rudolf Wittkower - Art and Architecture in Italy - Penguin Books 1958
The church did not have a proper façade until 1683 (you may wish to see it in a 1588 Guide to Rome). The façade is considered the masterpiece of Carlo Fontana, the leading architect in Rome after the death of Gian Lorenzo Bernini in 1680. According to the original plan it should have been flanked by two bell towers. 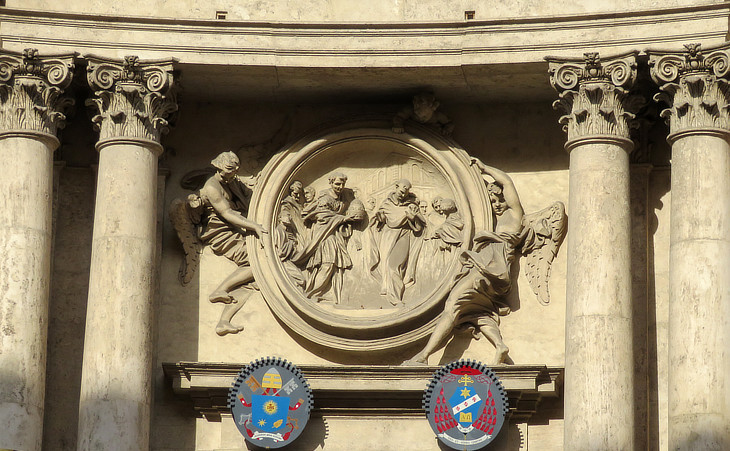 Detail of the façade with a relief showing St. Philip Benizzi in the act of refusing the tiara by Antonio Raggi, a scholar of Bernini (1683)

The Servite Order met with many difficulties in being recognized by the Roman Church; the initial approval was granted in 1249, but the Order was suppressed twice before its final approval in 1304. St. Philip Benizzi was superior of the Order between 1267 and his death in 1285. During the longest conclave of papal history he was elected to become pope, but refused. He was canonized in 1671. 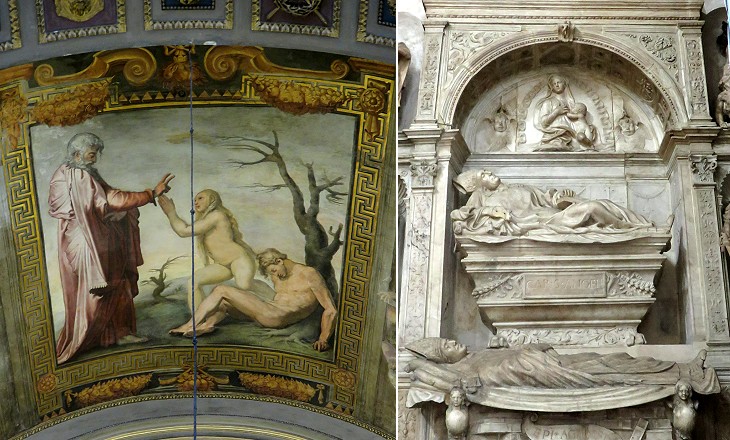 (left) Ceiling of Cappella del Crocifisso: Perin del Vaga: Creation of Eve (very similar to Michelangelo's painting in the Sistine Chapel - it opens in another window); (right) Monument to Cardinal Giovanni Michiel (above) and Bishop Antonio Orso (below), his nephew. It was attributed to Jacopo Sansovino, but today it is believed to be the work of a plurality of sculptors

The decoration of the interior of the church began immediately after the 1519 fire. Perin del Vaga was an assistant to Raphael in the decoration of the Papal Apartments in the Vatican and later on he was charged with that of the Papal Apartments at Castel Sant'Angelo. The choice of the Creation of Eve for the ceiling of Cappella del Crocifisso was due to a theological link between Eve's being made out of Adam's rib and the blood coming out from the wound in Jesus' ribs.
According to tradition Cardinal Michiel was poisoned by Cesare Borgia, son of Pope Alexander VI, in April 1503. His funerary monument at S. Marcello is interesting because he was portrayed as if he were in the process of awakening (his nephew instead was depicted in a typical gisant position). This posture eventually evolved into one which came from antiquity, where the dead was portrayed while attending a funerary banquet (see a page on ancient sarcophagi and Cappella Spada at S. Girolamo della Carità). 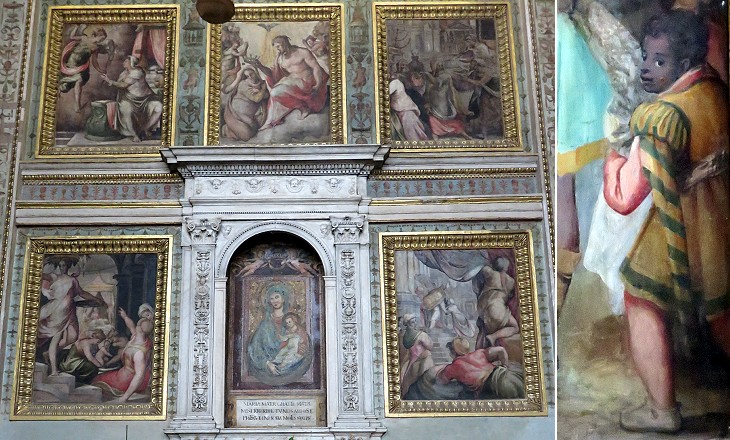 Cappella Grifoni: (left) frescoes by Francesco Salviati, a Florentine painter (1562) surrounding a XIVth century painting in a Renaissance marble frame; (right) detail of a fresco by Giovan Battista Ricci (1613) on the right side wall (see a large fresco by Ricci at S. Giovanni in Laterano)

S. Marcello continued to be decorated with fine works of art during the XVIIth and XVIIIth centuries. You may wish to see the the Frangipane Chapel with the busts of Muzio, Roberto and Lello Frangipane by Alessandro Algardi (1638), the Monuments to Giovanni Andrea Giuseppe Muti and Maria Colomba Vincentini Muti by Bernardino Cametti (1725) or the Monuments to Cardinals Fabrizio (d. 1726 - by Pietro Bracci) and Camillo Paolucci (1776 - by Tommaso Righi). 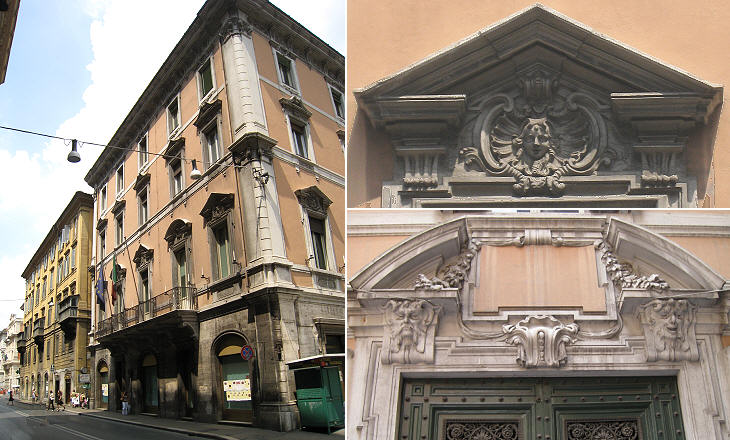 (left) Palazzo Mellini and via del Corso; (right-above) detail of a window; (right-below) portal in Via dell'Umiltà

The palace was initially built for Cardinal Giovanni Michiel who in 1490 donated it to the Servite Order; in 1532 it was sold to the Salviati and at the beginning of the XVIIth century to the Cesi, before being acquired by the Mellini, so its full name is Palazzo Michiel Salviati Cesi Mellini. The redesign by Tommaso De Marchis gave it a very light-hearted appearance. The Mellini had a medieval tower near S. Maria dell'Anima, a villa at Monte Mario and a chapel at S. Maria del Popolo. 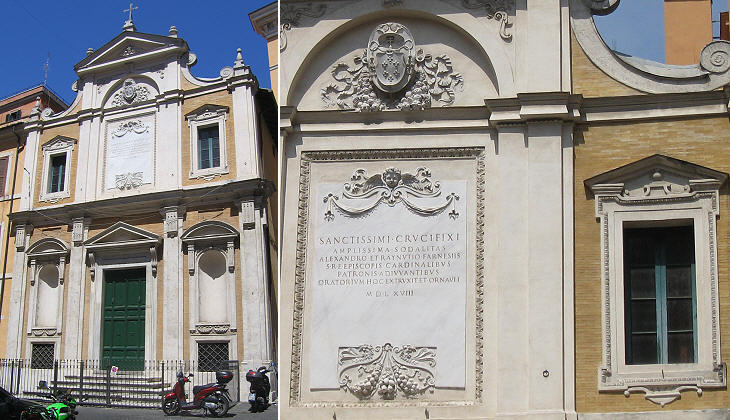 March the 7th, 1659. Afterwards wee went to A little Church called the Auditory of Marcel, which is behind the Corso, where wee heard Musicke. This place being appointed for the purpose, there being every Friday in the lent a Consort of the best voyces in Rome at this place. I thinke there was in this little Church all the strangers about Rome, where having waited some two howers, at last Musicke began with some a douzen voyces. A Lute, Violin and Organs, which sounded most sweetly, especially the Lute and Violin was so rare, that being once out of Rome it must never be expected to heare the like againe: the Subject that the musicke was upon was in the Praise of Thomas Aquinas, which A Dominican Priest extolled to the Skyes, calling him his Saint, and praying to him, that I beleeved the Priest lookes onely to be saved by the merrits of St Thomas, and not by the merrits of Christ.
Francis Mortoft's Journal of his travels in France and Italy
The oratory was built in 1568 by Giacomo della Porta for Confraternita del SS. Crocifisso, a brotherhood named after the crucifix of S. Marcello. The members of the brotherhood belonged to important noble families. Cardinals Alessandro and Ranuccio Farnese (d. 1565) were both members of the brotherhood and the former gave financial support to the erection and decoration of the oratory. The prayers, especially during Lent, were accompanied by music and the semi-dramatic musical composition known as oratorio was developed in this oratory by Emilio de' Cavalieri and Giacomo Carissimi. In 1679 at the age of 19, Alessandro Scarlatti received his first Roman commission for an oratorio from Confraternita del SS. Crocifisso. He is regarded by some music historians as the founder of modern opera. 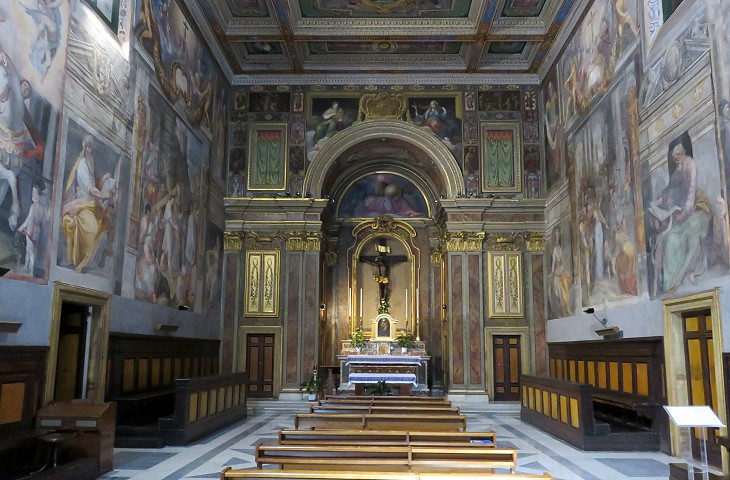 The interior of the oratory was decorated with large frescoes mainly portraying episodes related to the Holy Cross. Il Pomarancio is best known for his gruesome paintings showing scenes of martyrdom in S. Stefano Rotondo; his works in Oratorio del SS. Crocifisso show that he had a special talent for portraying the best of XVIth century children's fashion. You may wish to see an oratory in Palermo which was known for its concerts. 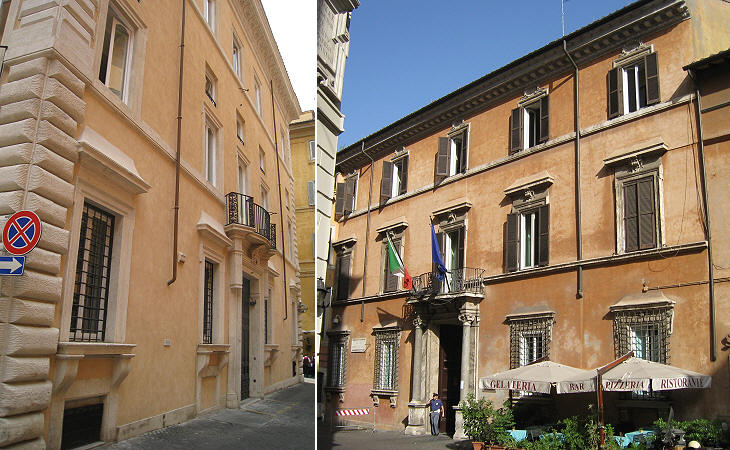 Two small XVIIth century palaces along Via dell'Umiltà behind S. Marcello are named after a prominent Roman family, the Maccarani, who also owned a palace opposite Chiesa di S. Eustachio. The Alli added Maccarani to their surname in 1666 when the last of that family bequeathed all his properties to Lellio Alli.

Palazzo Alli Maccarani has an interesting portal with a relief of Medusa, a Gorgon. A similar relief by Alessandro Algardi can be seen in the page covering S. Maria Maggiore.