Links to this page can be found in Book 8, Day 3, View C7 and Rione Trevi. 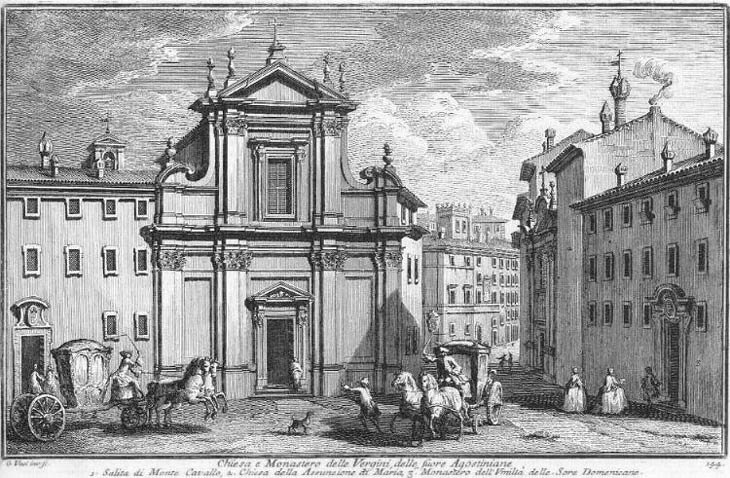 In this 1758 etching Giuseppe Vasi's main objective was to show the street leading from Via del Corso to Palazzo del Quirinale, the Papal residence on the Quirinal Hill (Monte Cavallo). The street was opened in 1611 by Pope Paul V to facilitate access to the palace where he usually lived.
The view is taken from the green dot in the 1748 map below. In the description below the plate Vasi made reference to: 1) Street leading to Monte Cavallo (Via della Dataria); 2) Chiesa dell'Assunzione di Maria; 3) Monastero dell'Umiltà. The map shows also 4) Via del Corso near S. Marcello; 5) S. Maria delle Vergini; 6) Palazzo della Dataria; 7) Palazzo della Panetteria. 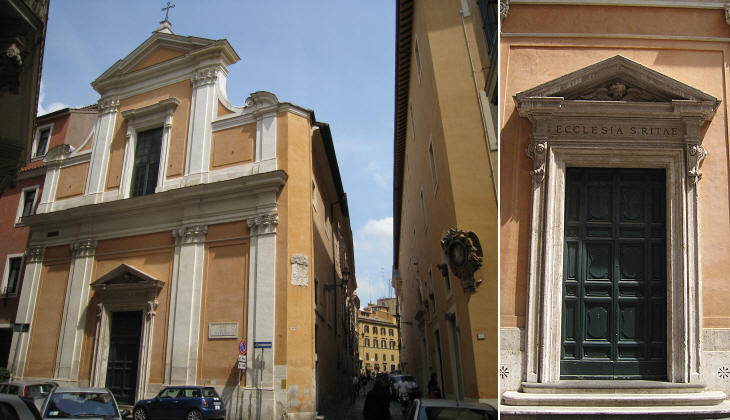 Today the main access to Piazza del Quirinale is from Via XXIV Maggio and this has helped in retaining the old aspect of this part of Rione Trevi. In his etching Vasi showed a frontal view of the church and of the adjoining nunnery, but to do this he ignored the fact that these buildings were located in a rather narrow street. In 1871 the nunnery was confiscated by the Italian government and radically modified: in 1904 the church was assigned to a brotherhood devoted to St. Rita of Cascia and its name was changed. 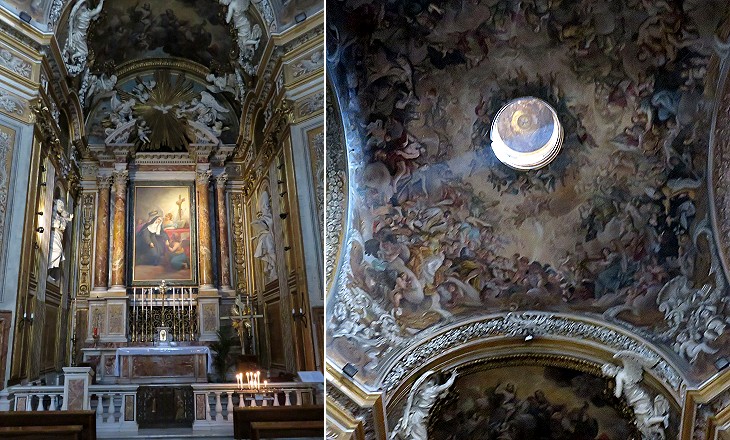 (left) Main altar designed in 1681 by Mattia de' Rossi; (right) ceiling of the dome (1695) by Michelangelo Ricciolini (you may wish to see other ceilings of that period and paintings by Ricciolini)

The nunnery and the church were built in 1632-1634, but the façade of the church was designed by Mattia de' Rossi later on and completed in 1696. The same architect, a scholar of Gian Lorenzo Bernini, designed the interior, but the painting on the main altar is a XXth century work portraying St. Rita. Notwithstanding the small size of the building the church has a dome which is not visible from the street. 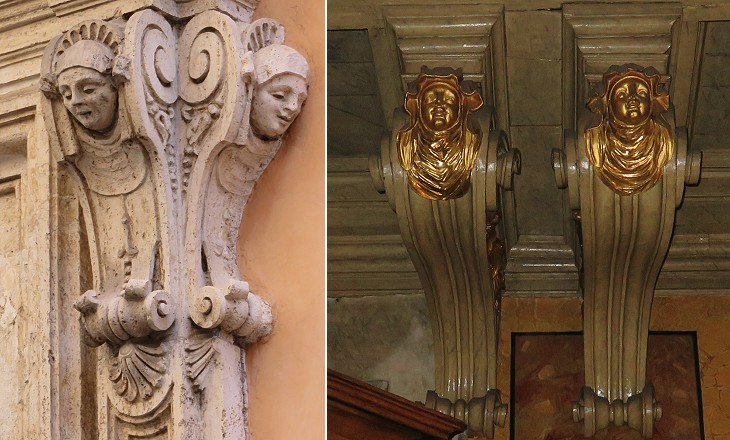 Heads of nuns decorate the portal and the interior of the church. The (secluded) nuns belonged to the Augustinian Order. Secluded nuns were often referred to as the virgins, the sepolte vive (buried alive) or the murate (walled in), rather than by the Order to which they belonged. In the XVIIth and XVIIIth centuries there were nearly fifty nunneries or other female religious institutions in Rome. The number of secluded nuns reached its peak (ca 2,800) after the 1655 pestilence (the population of Rome was ca 120,000). 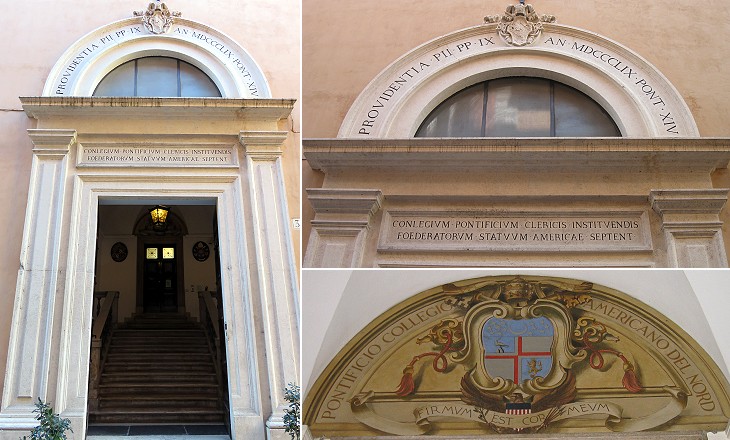 Monastero dell'Umiltà was a Dominican nunnery which was turned into the Pontifical North American College by Pope Pius IX in 1859. By reading one of the inscriptions one can learn the Latin translation of USA (Foederatorum Statuum Americae Septentrionalis). In the vestibule there is a modern coat of arms of the college with elements taken from those of Pope Pius IX and Pope Pius XII and a reference to the thirteen founding states which are represented by stars (see the image used as background for this page): the motto reads Firmum est cor meum (Steadfast is my heart) (Psalms 57:8; 108:2). Today the Pontifical North American College owns a seminary inside the Vatican City in addition to Casa Santa Maria, i.e. Monastero dell'Umiltà. 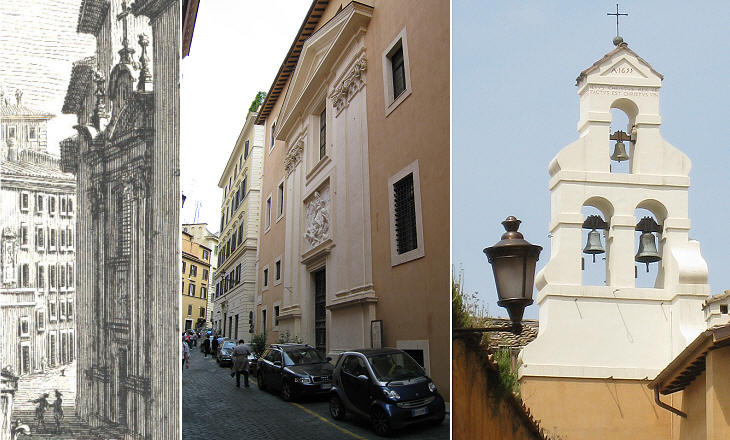 The nunnery had a church with an interesting baroque façade by Carlo Fontana which lost a lot when it was modified after 1859; the interior of the church is very lavishly decorated, because the nunnery could rely on the revenue from many properties bequeathed by its founder, Francesca Baglioni Orsini; notwithstanding the dedication to Humility, all the nuns came from noble families and this contributed to the wealth of the institution. 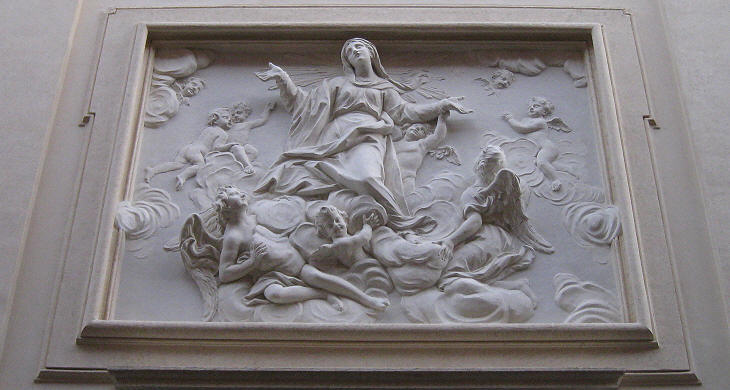 Relief on the façade by Vincenzo Felici (ca 1708)

The church is part of the Pontifical North American College and it is not open to the public. 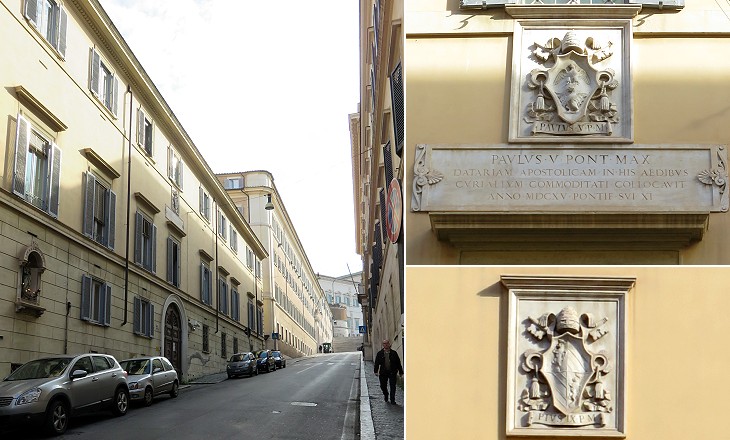 (left) Palazzo della Dataria and Palazzo della Panetteria behind it; (right) XIXth century coats of arms of Pope Paul V (above) and Pope Pius XII (below) 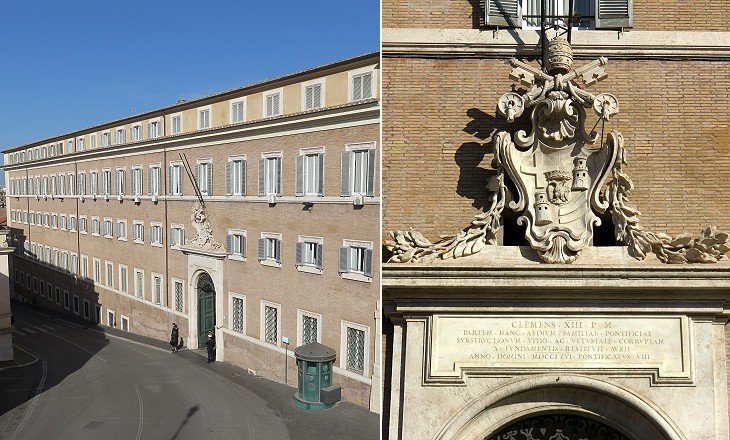 Palazzo della Panetteria is named after the bakery which is housed in its courtyard. Its official name was Palazzo della Famiglia Pontificia where famiglia did not mean the family of the Pope, but rather the servants and clerks who worked for him. It was built in 1764-1766. It is still part of the Palazzo del Quirinale premises. Its interior was modified in the late XIXth century when new facilities, including a coach house, were built in the courtyard. It can be visited, but it is not allowed to take photos.

Next plate in Book 8: Monastero di S. Cecilia.
Next step in Day 3 itinerary: Palazzo Odescalchi.
Next step in your tour of Rione Trevi: Palazzo del Quirinale.