S. Sabba Abate
(Vasi at work in the Grand View of Rome) 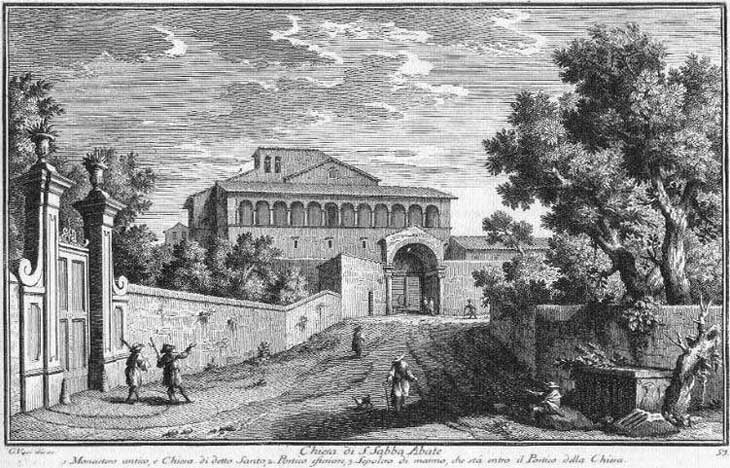 During the Middle Ages and until the early XXth century S. Sabba (S. Saba today) was almost the only building on this peak of the Aventine Hill. It must be said that even at the time of ancient Rome the area was scarcely inhabited, although the population of the city was much larger than it was in 1753, when Vasi made this etching. The street leading to the church was a dead end and it was very steep; Vasi did not show any coaches attempting to reach its top.
The view is taken from the green dot in the small 1748 map here below. In the description below the plate Vasi made reference to: 1) Monastery and church of S. Saba; 2) External porch; 3) Sarcophagus in the internal portico of the church (not shown in the map). The map shows also 3) Rovine delle Mura Serviane. 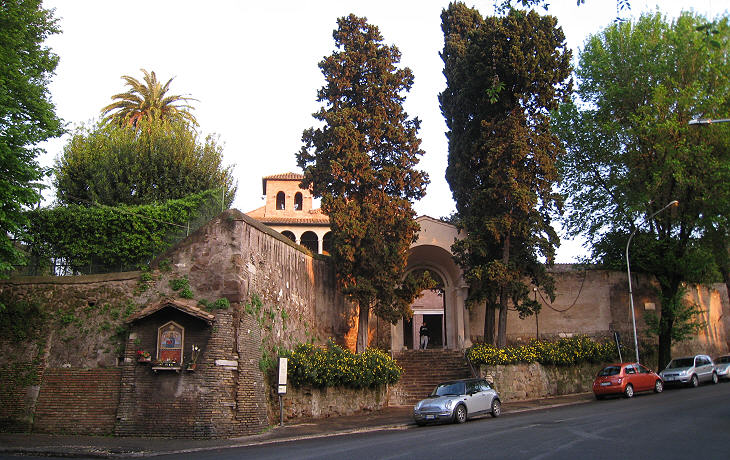 The view of the final part of the street leading to the church is very similar to that of the etching; the area around the church is no longer occupied by vineyards and kitchen gardens, but overall it retains a very peaceful atmosphere. You may wish to have a stroll in S. Saba, an early XXth century housing development which is named after the church. 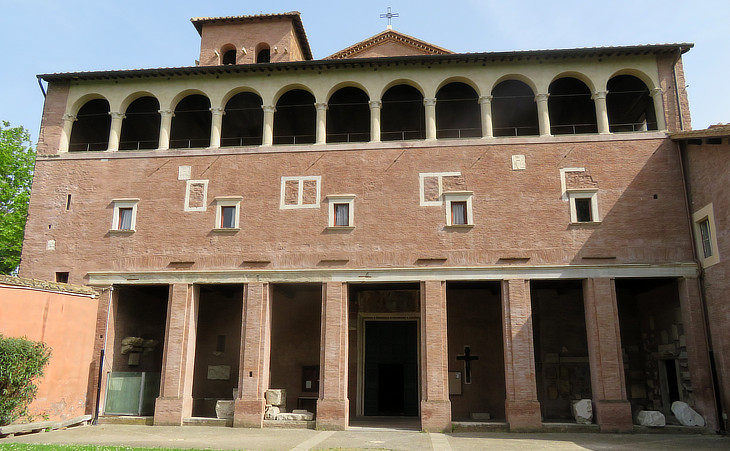 The church was built in the last years of the Xth century above an oratory of the VIIth century. In ca 1462 Cardinal Francesco Piccolomini, during the pontificate of his uncle Pope Pius II, added the loggia and restored the interior. You see his coat of arms in the image used as a background for this page. You may wish to see the building as it appeared in a 1588 Guide to Rome: its portico had six nice ancient columns which Pope Pius VI replaced with brick pillars in the late XVIIIth century (perhaps they were used for the decoration of his family palace). 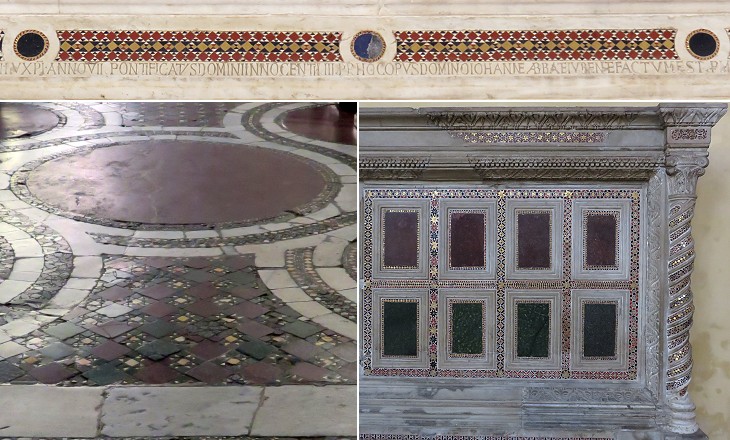 Early examples of Cosmati decoration: (above) 1205 lintel of the entrance; (below-left) pavement; (below-right) detail of the balustrade which separated the choir from the rest of the church: it was decorated by the Vassalletto, a family of mosaicists of the XIIIth century who are best known for the decoration of the cloisters of S. Paolo fuori le Mura and S. Giovanni in Laterano

St. Sabba (439-532) was a Greek monk who founded several lavra in Palestine, a lavra being a community living in small caves or cells around a chapel and a refectory; the most famous of them is the Great Lavra known as Mar Saba near Bethlehem in the West Bank. A form of monasticism similar to lavra is that from which the rock-cut churches and facilities of Goreme originated. In the VIIth century Palestine was first occupied by the Persians, then retaken by the Byzantines and eventually it was invaded by the Arabs. It is likely that monks who fled from the devastations of that land founded the first church/monastery on this part of the Aventine. 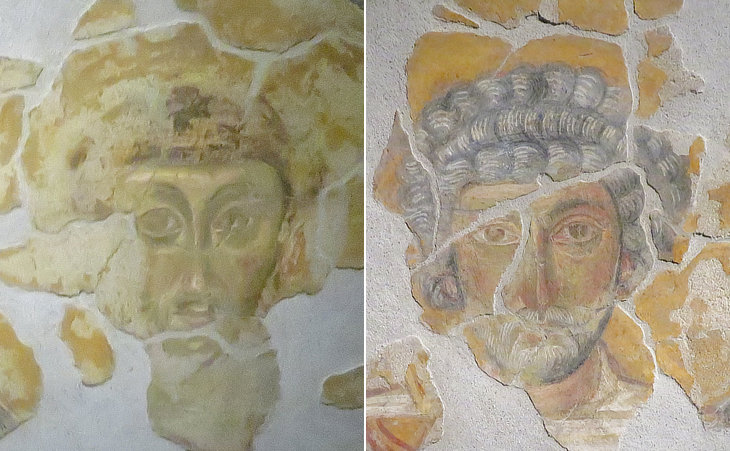 Frescoes from the oratory (VIIIth century) which were discovered in 1900 under the current church: (left) an unknown saint; (right) St. Sebastian portrayed as a Byzantine high military officer/courtier (see some VIth century mosaics at Ravenna)

Towards the year 1000 with the deepening of the rift between Rome and the Greek Orthodox world, the monastery was assigned to the Benedictines and later on to (Benedictine) monks from Cluny Abbey, who built the church above the oratory. 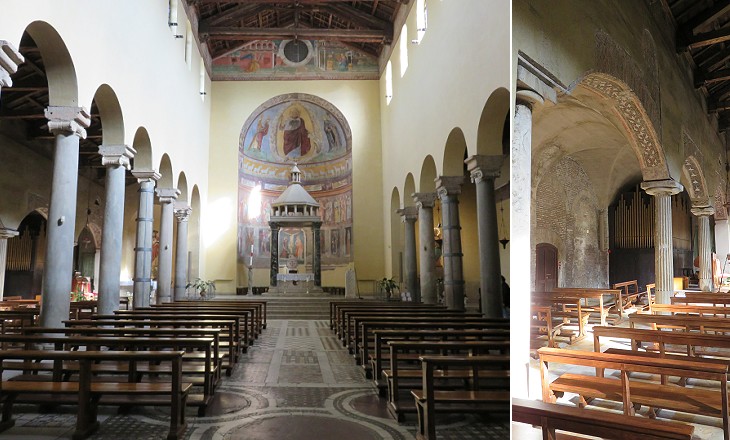 In the early XXth century the interior of the church was freed from additions made after the XVth century. The church has an unusual "fourth nave", smaller than the others on the left side of the building. It could have been a lateral portico facing a lost monastery. In the XIIth century it was closed and it became a "fourth nave". In the following century it was decorated with some fine frescoes. 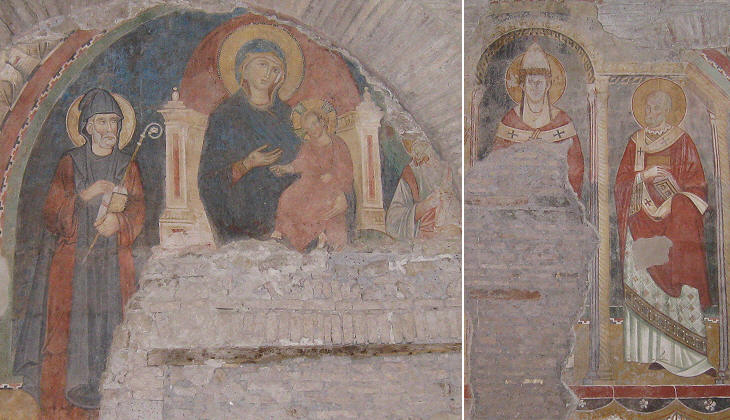 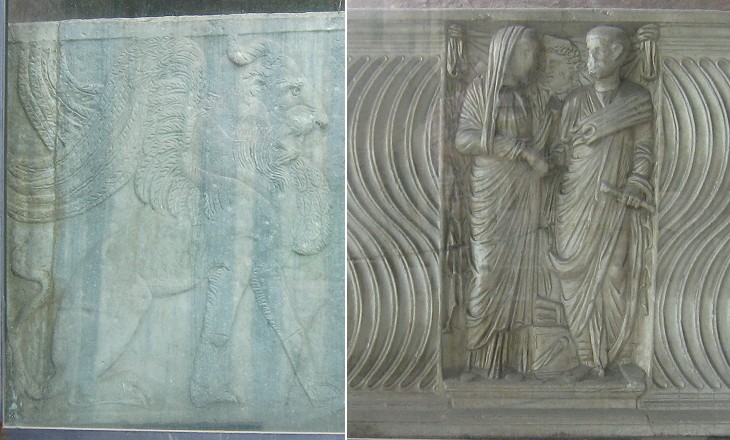 (left) Side of the sarcophagus depicting a mythological beast resembling a sphinx; (right) detail of the front showing a couple on their wedding day; see a page on the trade of sarcophagi

Vasi shows a sarcophagus on the right side of the plate, but he explains it is in the portico (where it still is). The decoration of the sarcophagus is called strigilato after the curved shape of strigilis, a tool used by the ancient Romans to take away sweat or oil after exercise or massage (you may wish to see a mosaic at Ostia showing its use). The couple is portrayed while shaking hands (dextrarum iunctio), the bride is veiled and receives some final advice and the groom holds the marriage contract; this way of depicting a couple can be noticed also in early Christian sarcophagi. You may wish to see the Aldobrandini Marriage, a fresco depicting scenes of a Roman wedding. 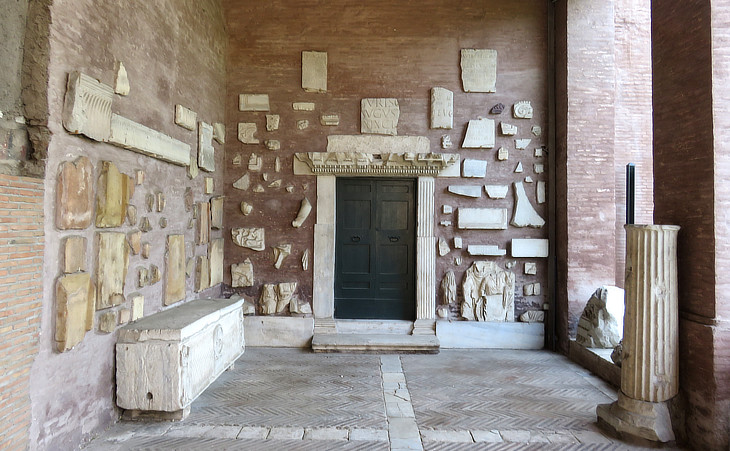 Right section of the portico with inscriptions and fragments of entablatures, statues and ancient bricks bearing the manufacturer's brand

The sarcophagus is part of a small collection of antiquities which were found in the area surrounding the monastery, including a rare VIIIth century relief depicting a falconer. 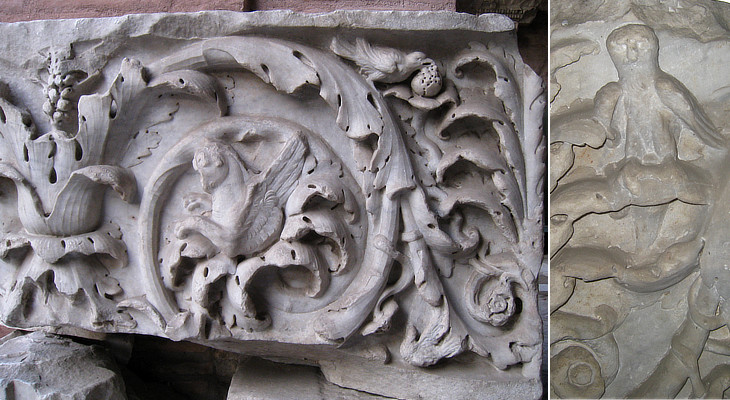 The use of acanthus leaves arranged as a scroll is a decorative motif which was widely used in classical architecture; during the Roman Empire the scrolls became "inhabited" by the depiction of birds or small hunting scenes (you may wish to see mosaics with this type of scrolls in Rome, at Corinth and Philippopolis and reliefs at Vaison and Arles). Servian Walls in Piazza Albania (left) and in Via S. Anselmo (right)

Ancient Rome had three sets of walls: a) the walls built on the Palatine Hill when Rome was founded by Romulus on April 21, 753 BC (the Romans counted the years ab urbe condita from this date). The walls were later on incorporated into the palaces built by the emperors; b) the Servian Walls, named after Servius Tullius, the sixth king of Rome, but most likely built during the Republican government of Rome in the IVth century BC. They surrounded the seven hills of Rome; c) the Aurelian Walls built in 275 AD by Emperor Aurelian and to a great extent still in place.
The valley between the two peaks of the Aventine retains one of the two remaining stretches of the Servian Walls (the other one being Aggere Serviano). This section was most likely restored in the Ist century BC during a period of civil strife. It retains an arched opening for a ballista, an engine which threw stones on the assailants. 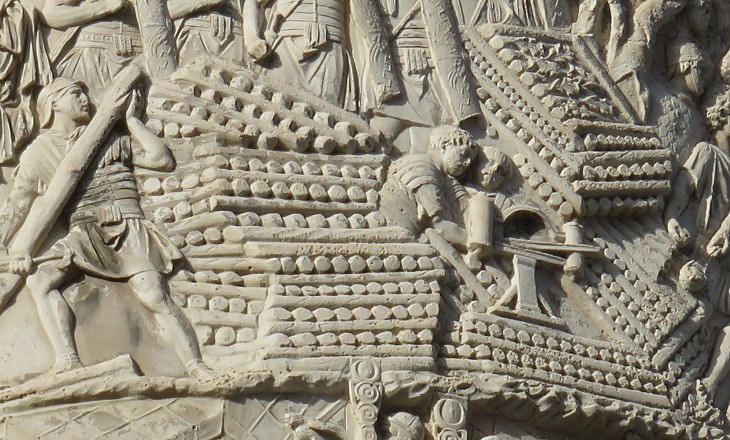