Philippopolis (today's Plovdiv) is a major town in Bulgaria, which was founded by King Philip II of Macedonia, the father of Alexander the Great; the name however applied also to the birthplace of Emperor Philip the Arab, in the Roman Province of Arabia (today's Jordan and southern Syria). 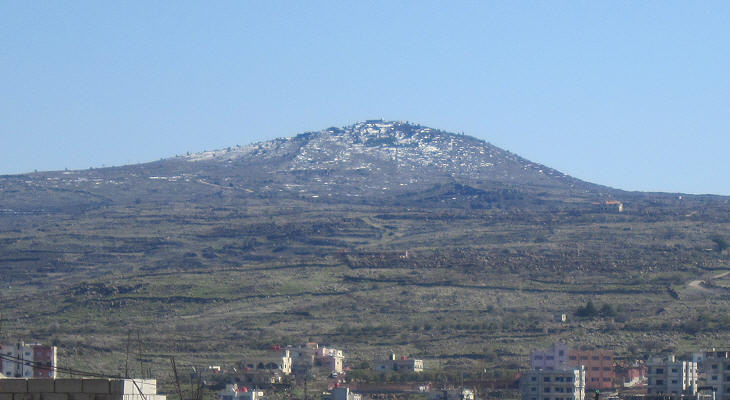 November 13th. Shohba, the seat of the principal Druse Sheikhs, and containing also some Turkish and Christian families (..) was formerly one of the chief cities in these districts, as is attested by its remaining town walls, and the loftiness of its public edifices.
John Lewis Burckhardt - Journal of an Excursion into the Haouran in the Autumn and Winter of 1810.
Philippopolis in Arabia (today's Shahba) is located in Hauran, a region of Syria which enjoyed a period of great prosperity after being annexed to the Roman Empire by Emperor Trajan in 106 AD. Hauran is a low tableland which is limited to the west by the Anti-Lebanon Mountains and the Golan Heights and to the east by Jebel al-Druze, a range of low mountains which today are named after the Druzes who migrated to this region from Lebanon and repopulated it in the XVIIth and XIXth centuries; Jebel al-Druze separates Hauran from the Syro-Arabian desert, a combination of steppe and true desert which from Syria and Iraq reaches Jordan, Saudi Arabia and Yemen. 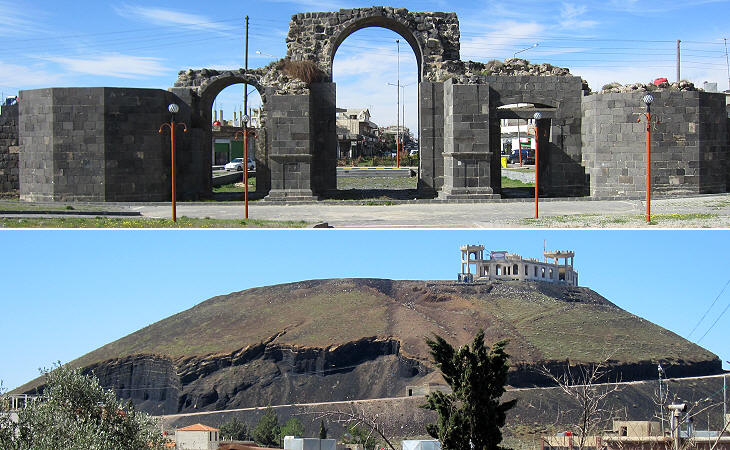 (above) Southern gate; (below) volcanic cone outside the western walls of the town which was quarried for basalt stones

The walls may be traced all round the city, and are perfect in many places; there are eight gates, with a paved causeway leading from each into the town. (..) The western side of the Tel Shohba seems to have been the crater of a volcano, as well from the nature of the minerals which lie collected on that side of the hill, as from the form of a part of the hill itself, resembling a crater, while the neighbouring mountains have rounded tops, without any sharp angles. Burckhardt
Philip the Arab became emperor during a turbulent period of Roman history, known as Military Anarchy; he was the head of the Praetorian Guard when Emperor Gordian III died in unclear circumstances during a campaign against the Sassanids (Persians); he was acclaimed the new emperor by his guards and he almost immediately signed a peace with the Sassanids, in order to be free to go to Rome to obtain the endorsement of the Senate to his appointment.
One of his first acts was to order the transformation of his native village into a typical Roman town which was built using readily available basalt stones. 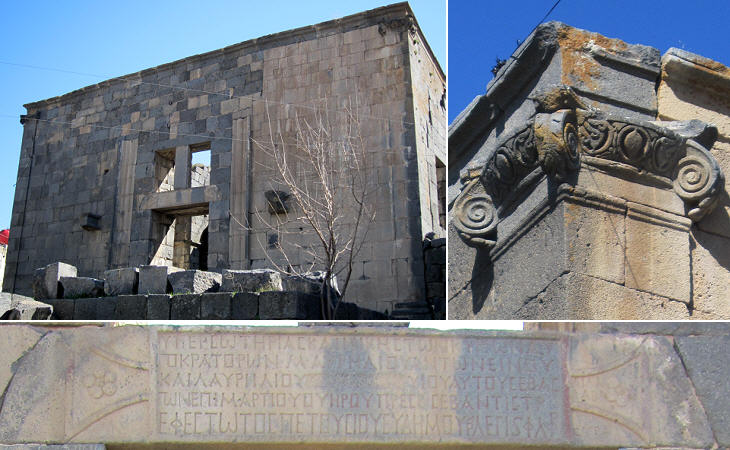 Philippeion, temple to the family of Emperor Philip

Philip erected a temple/mausoleum to his father Julius Marinus; it is a relatively small building and, perhaps owing to haste, its decoration is rather modest; even the dedicatory inscription is far below the standards of Roman epigraphs; in 212 Emperor Caracalla gave Roman citizenship to all freemen of the Empire, but it is generally believed that Julius Marinus had already acquired citizenship at that time.
The Syrian government regards Philip as a national hero (he was portrayed in the 1998 100 Syrian pounds note) and stresses his Arab descent, but the suffix the Arab could have been just a reference to the province he was born in, rather than indicating his belonging to an ethnic group. 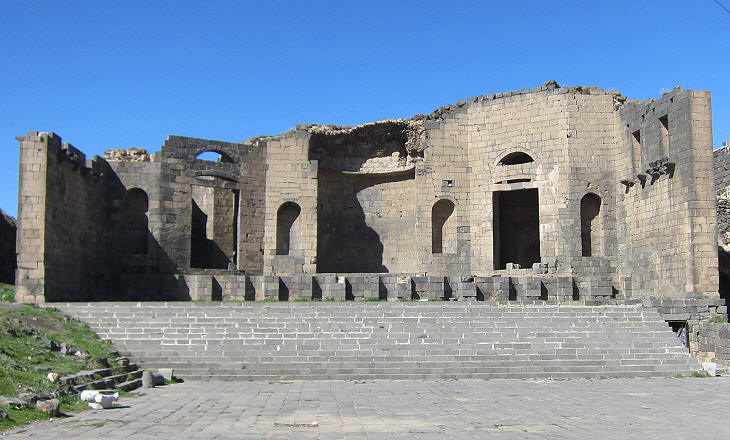 I came to the principal building in this part of the town; it is in the form of a crescent, fronting towards the east, without any exterior ornaments, but with several niches in the front. Burckhardt
Kalybe was a kind of temple typical of the Hauran region (see that at Bosra); the statue of the god was not housed in a cell, but was placed in the front of the temple; in the case of of the kalybe of Philippopolis the statue in the central niche was most likely that of the divinized emperor himself, as the building stands opposite the Philippeion. To the south of the crescent formed building, stands the principal curiosity of Shohba, a theatre, in good preservation. It is built on a sloping site, and the semicircle is enclosed by a wall nearly ten feet in thickness, in which are nine vaulted entrances into the interior. Burckhardt
When compared to the theatre of Bosra, the provincial capital, that of Philippopolis seems to have been built on a miniature scale; Philip was probably aware his days on the imperial throne were numbered and he did not think of a long range plan for the development of a new large town, he just ensured it had all the monuments of a typical Roman town; actually they are located one next to the other. 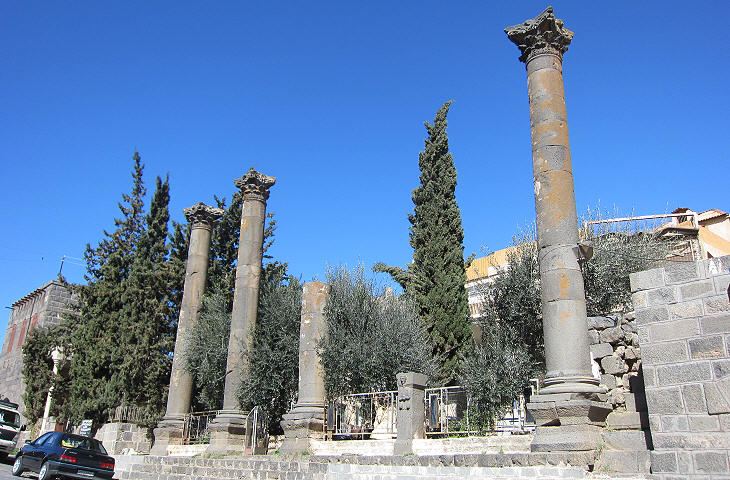 Hexastyle Temple (perhaps another kalybe) along the Decumanus Maximus; a capital is shown in the image used as background for this page

Upon a terrace, stand five Corinthian columns, two feet and a quarter in diameter, all quite entire. Burckhardt
In 248 Philip had the honour to preside over the celebrations of the one-thousandth anniversary of the foundation of Rome; the festivities were magnificent, but their cost together with the payments made to the Sassanids to reach a peace agreement, forced Philip into levying more taxes, thus weakening his popularity. 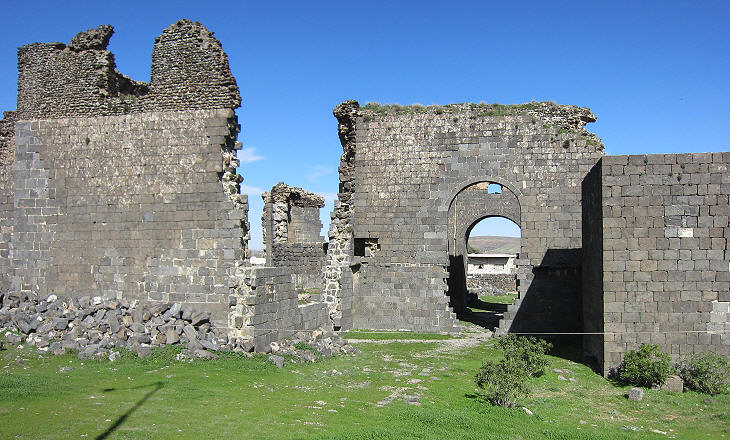 Near the town, is a spacious building divided into several apartments, one of which (..) has two high vaulted entrances opposite to each other, with niches on each side. In the walls are several channels from the roof to the floor, down which the water from the aqueduct probably flowed. On one side of this room is an entrance into a circular chamber fourteen feet in diameter; and on the other is a similar apartment but of smaller dimensions, also with channels in its walls. (..) The building seems evidently to have been a bath. Burckhardt
In the following year Philip lost the throne and his life when the Danubian legions rebelled and marched towards Rome; all activities at Philippopolis stopped and the town gradually fell into oblivion; however the aim of Philip was achieved as all the key monuments and facilities of a veritable town were already completed. 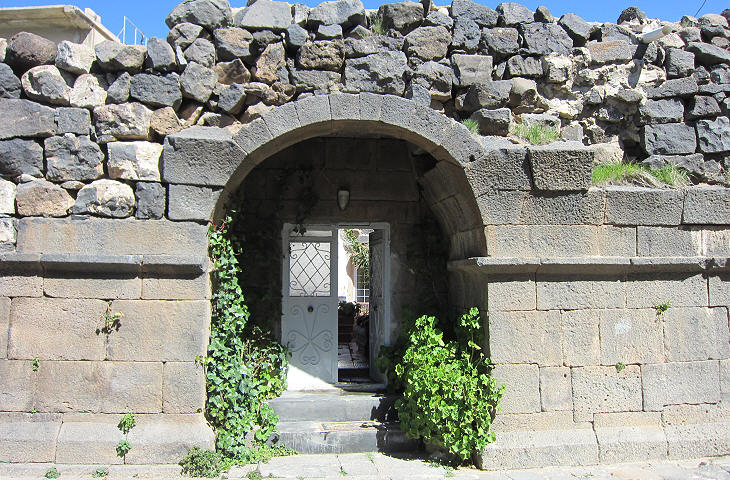 A modern house nested inside an ancient building along "Decumanus Maximus"

Shahba is a modern town on the road which links Damascus to Suweida, the main centre of Jebel al-Druze; the road crosses Shahba from north to south and nothing is left of Cardo Maximus, the ancient Roman street which had the same direction. A few stretches of Decumanus Maximus, the street which crossed Philippopolis from east to west, can still be seen behind the kalybe. 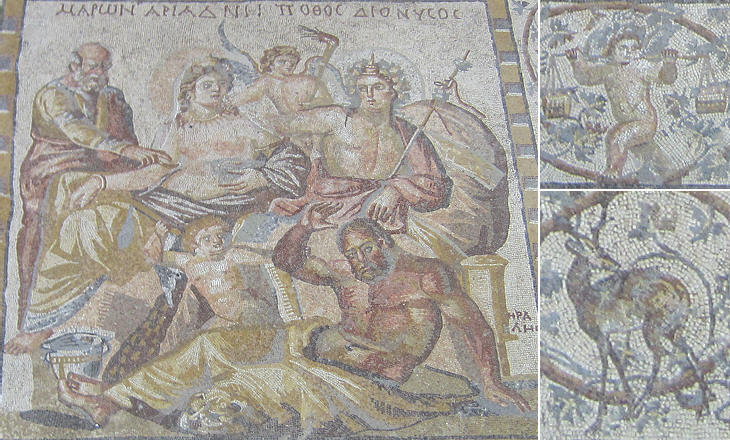 Roman house (IVth century): (left) Ariadne and Dionysus and a drunken Hercules lying on the ground; see the same subject in a mosaic and a sarcophagus in France; (right) details of the frame

In 1952 a series of mosaics were found in a house not far from the baths; some of them were removed to be displayed at the National Museum of Damascus, but eventually Syrian authorities decided to maintain in situ the other ones. These mosaics portray subjects typical of the Hellenized world, but when they were designed (first half of the IVth century) that world was starting to fade away and this is evident in the portrayal of clothed gods.
The mosaic shown above decorated the banquet hall; it was a hymn to drunkenness and the frame showed small scenes of grape harvesting (see those in large mosaics in Lebanon and Algeria). 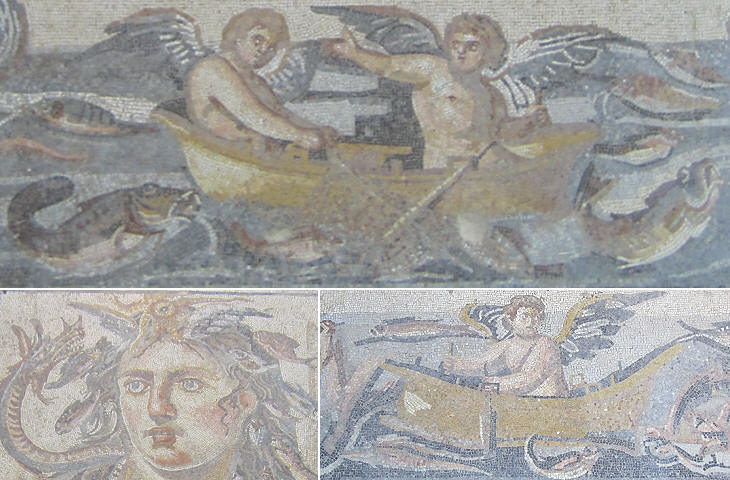 The sea, its gods and monsters, fish, fishermen and boats were another very popular subject for mosaics throughout the whole Roman Empire from Tripolis in Libya to Antioch. The similarities between this mosaic and others in very far away locations are striking. 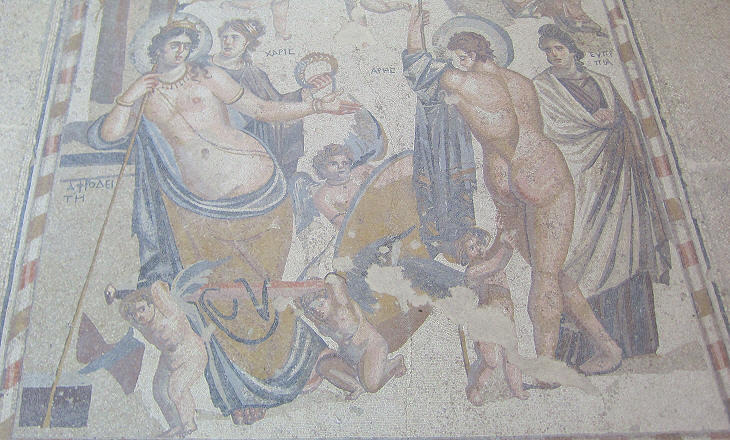 This mosaic represents an event which was regarded as scandalous even by the disinhibited Greek gods: Aphrodite, wife of Hephaestus, had a love affair with Ares, Hephaestus' brother, in her own home; the two were surprised by the husband who tied them up with unbreakable and invisible chains he had forged and brought them to Zeus to be punished. This subject could have led to depicting a very erotic scene, but instead it was turned into a moral account by showing Charis, one of the three Graces, giving a wreath symbolizing proper behaviour to Aphrodite while four Eros separate the two lovers. 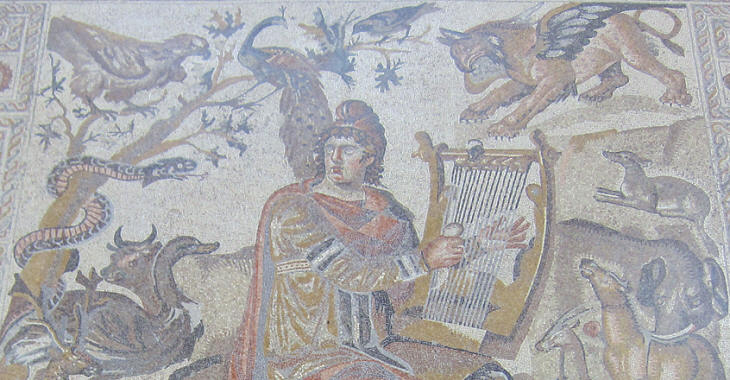 If we were to decorate our modern homes with mosaics we would probably place this mosaic in the children's room and then ask them to tell us the names and to imitate the calls of all the animals surrounding Orpheus; this illustrated zoo was also depicted in small sculptures serving as table supports (see an example at Sabratha). Roman house: the Three Graces (you may wish to see their statues in Turkey)

This mosaic shows another popular subject: the three handmaiden of Aphrodite portrayed with doves drinking from a sort of baptismal font; this mosaic is almost identical to one found at Narlikuyu, near Seleucia ad Calicadnus (today's Silifke in Turkey). While the Graces disappeared in Christian iconography to make room for the Theological Virtues, doves became even more important as a symbol of the Holy Spirit. 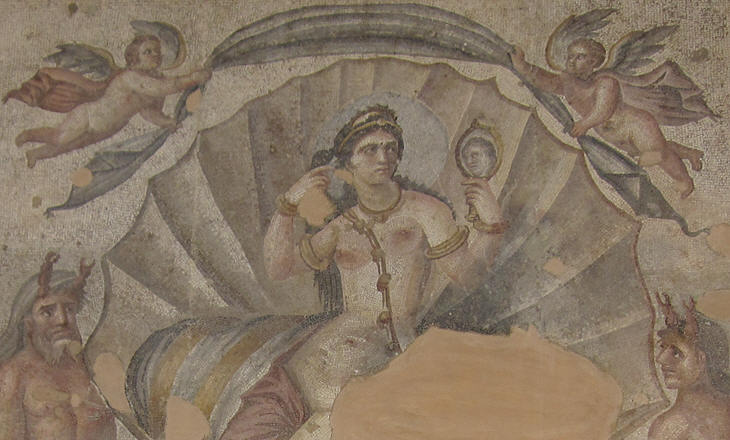 Museum of Suweida: Toilet of Aphrodite, mosaic found in the environs of Philippopolis (IIIrd century)

The Museum of Suweida houses other mosaics found near Philippopolis; they were made at a slightly earlier time than those in the house in town; the one shown above is of a superior quality for its elegant symmetrical structure and for a detail: the face of the goddess reflected in the mirror (Jan van Ejck and other Flemish painters would have loved this mosaic). The billowing mantle (velificatio) above the goddess is a symbol of her divine nature (see other examples in Rome, Pompeii and Tunisia). 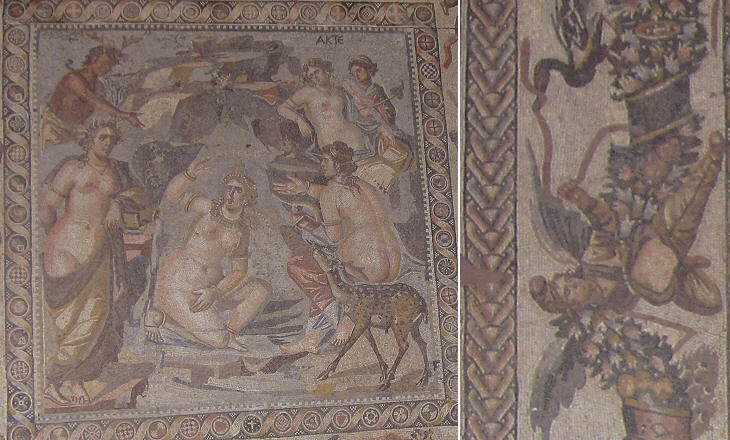 Museum of Suweida: (left) Actaeon surprising Artemis in her bath; (right) detail of the frame; mosaic found in the environs of Philippopolis (IIIrd century)

In some instances a modern viewer is more impressed by the elaborate frames than by the central scene of the mosaics. "Inhabited" scrolls similar to those shown below could also be seen in reliefs (see an example in Rome). Museum of Suweida: details of the frame surrounding the Wedding of Peleus and Thetys, a mosaic found in the environs of Philippopolis (IIIrd century)