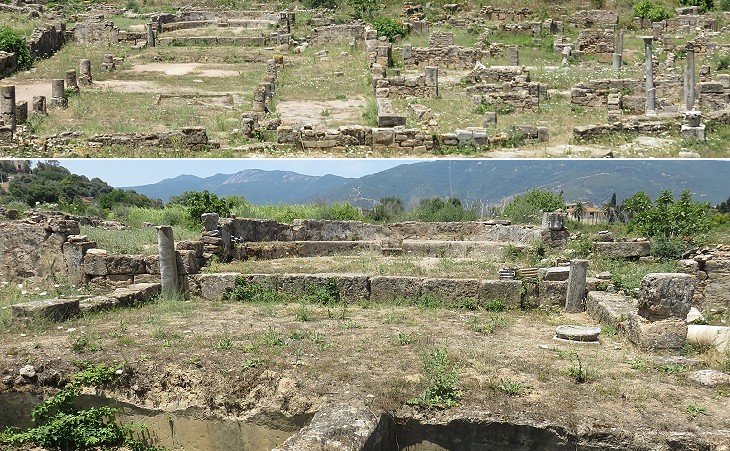 (above) Christian neighbourhood; (below) part of the Christian main basilica

The Edict of Milan which in 313 made legal the Christian religion did not mark the end of trouble for its followers in Northern Africa. The community split into Donatists, after the name of a local bishop, and those who were loyal to the official hierarchy, which was endorsed by the Pope and by the Emperor. In many towns of the region, e.g. at Sufetula, the two communities built their religious facilities in different neighbourhoods.
(St.) Augustine, Bishop of Hippo Regius, was a fierce opponent of the Donatists and in 411 a council at Carthage declared their theological views to be heretical. Emperor Honorius endorsed the outcome of the council and Donatist churches and properties were confiscated.
In 1958 Erwan Marec, a French archaeologist who conducted excavations in 1947-1963, came to the conclusion that a large basilica in the northern part of the ancient town was erected by Augustine to celebrate the new concord of the Christian community. He called it Basilica of Peace because of many inscriptions with the sentence Fidelis in pace (Faithful in Peace). He based his statement also on Basilica of Bishop Cresconius at Cuicul which was clearly built for reuniting the two communities. 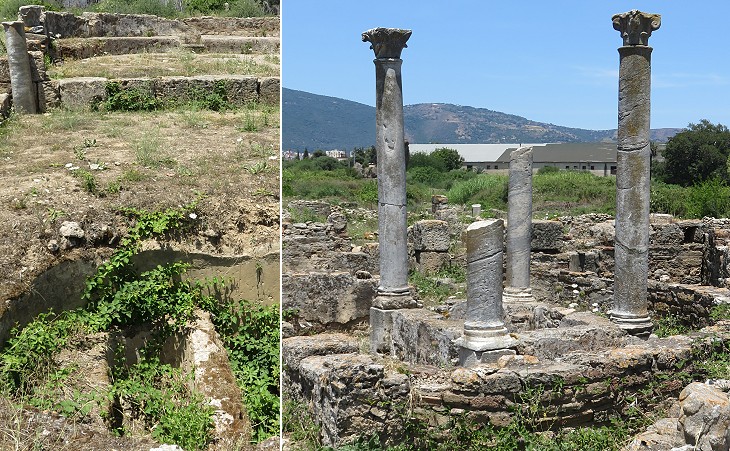 (left) Site where sarcophagi were buried in the basilica; (right) baptistery

Marec's opinion was challenged by other archaeologists who indicated another location for the basilica built by Augustine. That shown above is now dated end of the IVth century, prior to the condemnation of Donatism. In this and in many other early churches great importance was given to the baptismal font; the sacrament was administered to adults by immersion during a public ceremony. The fonts were decorated and covered by a canopy (see the font of Basilica of Vitalis at Sufetula).
The practice of being buried inside a church did not have precedents in the Roman usage, but it became very popular in all Christendom (see a funerary basilica at Salona in Dalmatia). 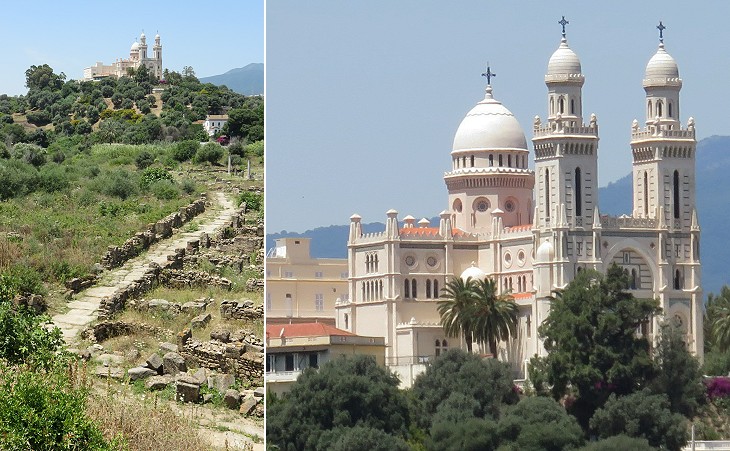 St. Augustine, who had been converted four years before, was ordained priest here a.d. 390; here he resided, a Priest and bishop, for 35 years; and here also he wrote his "Confessions," and his "City of God". St. Augustine was buried in the Basilica of Hippone. After the persecution of the Vandals had driven many of his disciples into exile, two of the last bishops are said to have carried off his relics with them and deposited them in the Basilica of Cagliari, where they remained for 223 years; they were then translated to Pavia, and there they repose at the present moment in a magnificent monument in the cathedral. In 1842 the reliquary was opened, and the right arm of the saint abstracted for the purpose of being conveyed to Bone; it was taken over to Africa with great solemnity by a commission of seven bishops, twelve priests, and a number of monks and nuns, and deposited in the cathedral there.
John Murray - Handbook for Travellers in Algeria and Tunis - 1895
As soon as the precious relic reached Annaba/Bone it was felt that an imposing church ought to be built to house it. Construction began in 1881 and was completed in 1900. The building was designed by Joseph Pougnet, a French priest and architect, in a nondescript style. A museum inside the archaeological area houses many fine statues which decorated the Forum, the baths and the private houses of Hippo Regius. They all reflect known patterns and were most likely imported, although in some instances analysis of their marble indicates they were made locally.
The most interesting exhibit of the museum, apart from the mosaics, is a bronze trophy which was found in the Forum and that most likely celebrated the victory at Tapsus near Monastir in Tunisia of Julius Caesar against the supporters of Pompey in 46 BC. The latter were led by Metellus Scipio, Pompey's father-in-law, who, according to tradition, committed suicide at Hippo Regius, similar to what Cato the Younger, another leader of his party did at Utica.
He was driven back upon the African coast by a head-wind and saw his ship in the power of the enemy. He therefore pierced his body with a sword; and when they asked where the commander was, he replied: "All is well with the commander."
Seneca - Epistulae Morales - XXIV - translation by Richard M. Gummere 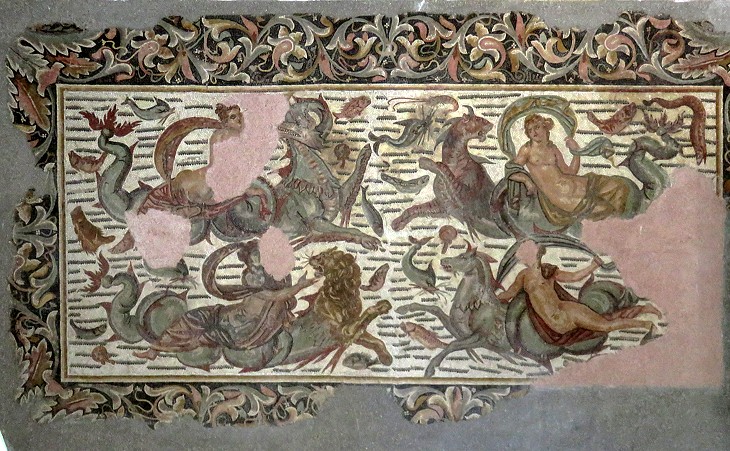 Musée d'Hippone: Mosaic of the Four Nereids from Villa du Procurateur, the residence of Q. Allius Maximus, legate of the Roman proconsul at Carthage; a detail can be seen in the introductory page

During the first excavations in the XIXth century a house with a hall decorated with a fine floor mosaic was identified, but the finding was not followed up and eventually it was thought it had disappeared under new modern buildings or the railway line. It was rediscovered in 1958 by Erwan Marec who ensured the mosaic was not lost a second time. 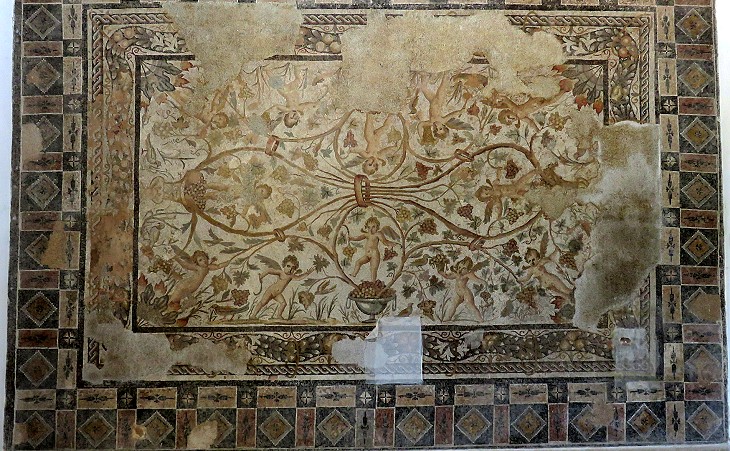 This mosaic departs from a traditional pattern in which grapevines originate from four kantharos at the corners of the scene as in a mosaic in the Museum of El-Djem. Here the vases are at the centres of the four sides and their grapevines form a sort of gigantic bow. The scene is populated by twelve Cupids who are busy harvesting grape. Kantharos were adopted by the early Christians as a symbol of life and grape harvesting continued to be a popular decorative pattern in Christian buildings as at S. Costanza in Rome.
The cardinals have elected me, a simple, humble worker in the vineyard of the Lord is how Pope Benedict XVI described himself in his first public appearance on April 19, 2005. Mosaics depicting fishing activities were another popular subject; they provide interesting information on how fish was caught; very often Cupids (as at Leptis Magna) or children (as at Antioch) were portrayed as fishermen. In this mosaic instead tanned fishermen are portrayed in a realistic way; in addition they are not fishing in a generic sea, but in that of Hippo Regius, the monuments of which are depicted with precision although in isolation. 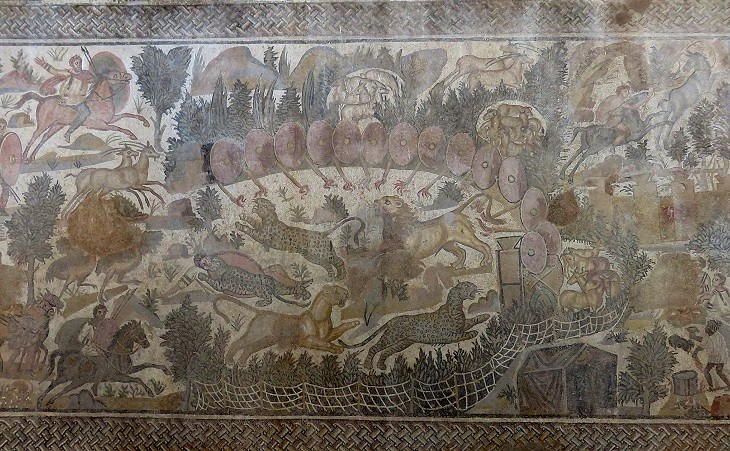 Musée d'Hippone: Mosaic of the Hunt

The most spectacular mosaic found at Hippo Regius depicts a series of hunting scenes in a landscape of olive and palm trees. The hunt is a very peculiar one because it is aimed at catching wild animals alive. This activity was an important economic resource for the region because the animals were shipped to Carthage, Rome and other large cities of the Empire for venationes in the amphitheatres. These combats could be between two animals or an animal and a gladiator. 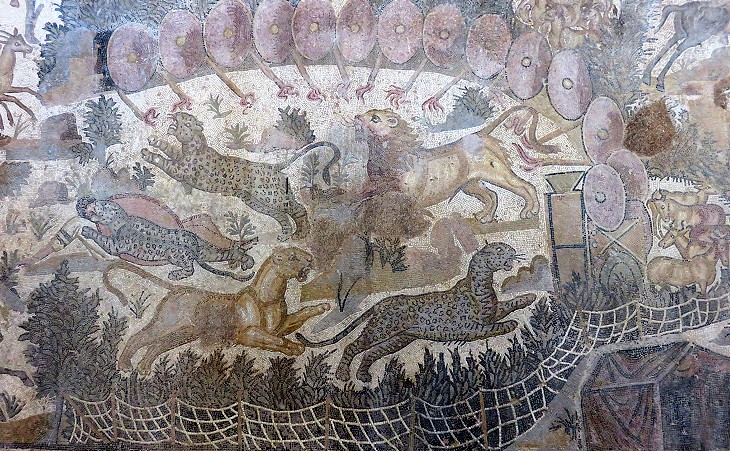 The central scene shows how lions and leopards were captured alive. The wild animals were attracted in a designated spot by some cattle offered as a bait; then the hunters with torches scared them and forced them towards nets where they were eventually captured. A very large mosaic at Villa del Casale in Sicily shows another step of this lucrative trade: the shipping of the animals to their final destination.

Musée d'Hippone: Mosaic of the Hunt: details: (left) capture of a wild ass (the horseman calls to mind the Moor cavalrymen of Colonna Traiana); (right) a black servant preparing a meal

The image used as background for this page shows the relief of a gravestone which portrays a farmer.