- Salona
(a sphinx at Diocletian's Mausoleum) 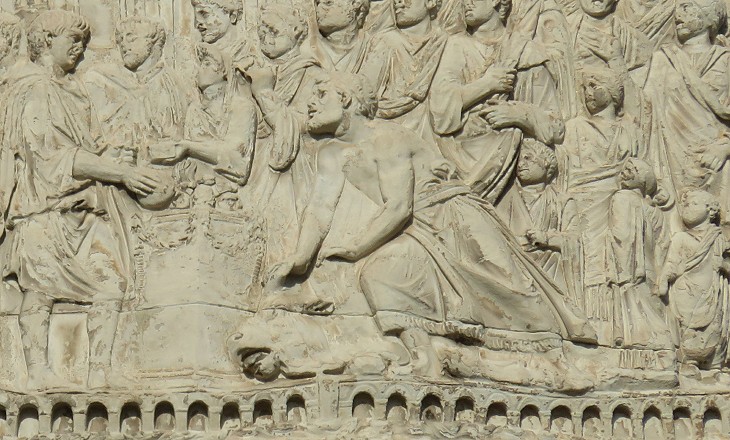 Colonna Traiana: the inhabitants of Salona celebrate the arrival of Emperor Trajan (left) during his second Dacian campaign by sacrificing a bull. The children attending the ceremony recall those of "Ara Pacis Augustae"

Qua maris Hadriaci longas ferit unda Salonas (Where long Salona stops the waves of the Adriatic Sea) Lucan - Pharsalia (De Bello Civili) IV, 404. The unknown sculptor of the column had in mind this verse when he depicted a sort of extremely long wharf to indicate Salona in the lower part of the scene.
It has been suggested that there may have been 'long walls' to connect Salona with a port further down the coast where there was more depth of water, and if so, this may partly explain the exaggerated estimates of the length of the city.
Sir Thomas Graham Jackson - Dalmatia, the Quarnero and Istria - 1887
Sir Thomas Graham Jackson (1835-1924) was one of the leading architects of his time. He visited Salona in 1885 when the systematic excavations conducted by Prof. Francis Bulic shed more light on the ancient city. His account is still useful to describe the ruins. 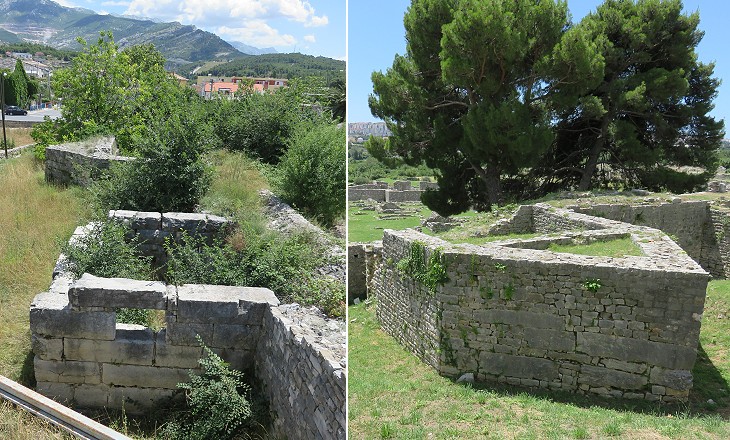 Salona was taken and retaken many times by Goths and Huns and other barbarians before the time of its final and irretrievable ruin in 639 at the hands of the Avars, and the broken and patched walls tell the tale of the troubled fortunes of the city. It was taken by Theodoric in 490, recovered by the Byzantines in 535; retaken by Theodatus the Gothic king, and again recovered by the Empire; a third time conquered by the Goths in 547, and finally retaken by the Empire in 551. At different times bastions have been applied to the walls on the outside, touching but not bonded to the older fabric, the first series of these towers being square, and a later series, dating it is supposed from 400 AD, projecting with a beak or triangle to the front.
T. G. Jackson 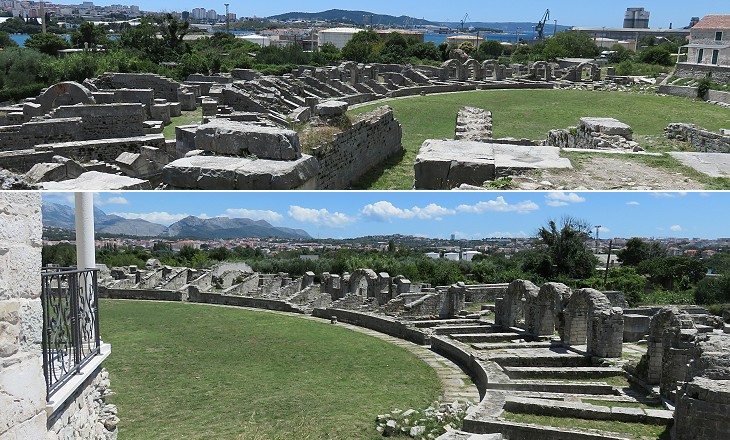 At the far end of the city westwards are the ruins of the Amphitheatre, perhaps the only building that survived the conflagration of the Avars in 639. Although, however, a smooth oval mead preserves the form of the arena, little enough remains at the present day of the building itself. (..) A few arches of the outer walls remain in parts of the circuit. The situation is a lovely one, and commands a fine view of the sea lake of Salona.
T. G. Jackson
The first excavations were initiated by Franco Carrara, a priest and archaeologist from Spalato, at the end of the 1840s. The walls of the amphitheatre we see today were largely reconstructed in the 1950s. A small village nested inside the ancient building until the XVIIth century when it was destroyed by the Venetians to prevent its being occupied and fortified by the Ottomans. Archaeologists have found evidence of two chapels built to commemorate the Christian martyrs of Emperor Diocletian's persecution, which began in the amphitheatre with the killing of Domnius, Bishop of Salona (see his burial chapel in the Cathedral of Spalato). 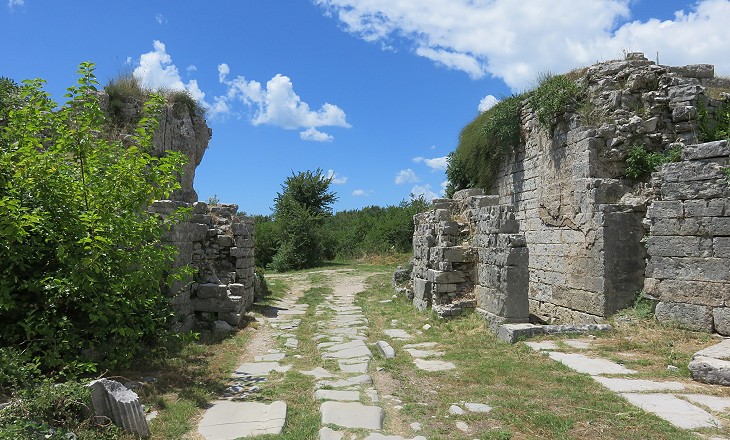 Porta Caesarea (seen from the west)

Travelling still westward we came to the diaphragm wall which cuts the city in two, and is pierced by the ancient gate marked on Professor Bulic's plan as Porta Caesarea. This was an imposing structure, flanked by an octagonal tower on each hand, and with a large central archway for carriages between two narrow ones for foot passengers. The arches are now gone, but the jambs remain, and the pavement with ruts six inches deep marking the wheel tracks. The outside of this gateway, as I have before observed, was turned towards the eastern part of the city which we had already traversed, as if the western part were the older.
T. G. Jackson
The section of the western and oldest part of Salona which included the harbour most likely will never come to light as its presumable location is today covered by a busy coastal road and by modern buildings.

Excavations by Bulic at the theatre began in 1900, after Jackson's visit, and were followed by those of a Danish archaeological mission in 1922-1924. The theatre was situated near the Forum of the town, of which only a few low walls remain. It is likely that the Forum and the theatre were used as a quarry to build a series of churches and other religious facilities in the eastern part of the town. 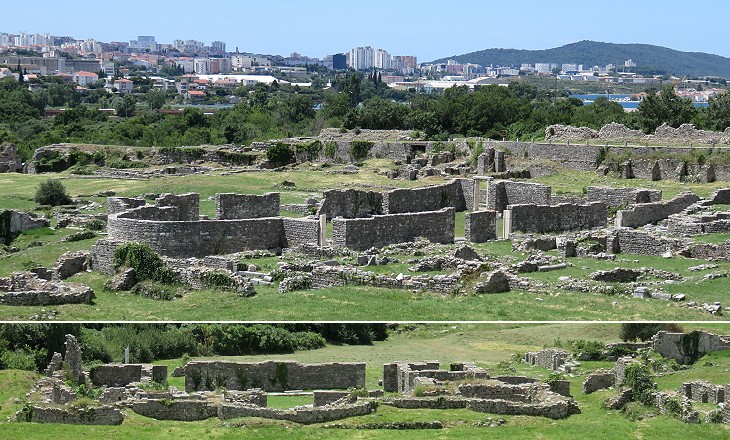 Churches in the eastern part of Salona

Urbs Nova Orientalis (New Eastern City) is the name given to the eastern part of Salona where a large number of Christian buildings were erected in the IVth-VIth centuries. The choice was perhaps prompted by the fact that the Early Christians met there in a private house, which was turned into an oratory. The construction of Urbs Nova Orientalis marked in a physical way the move from the ancient religion to the new one.
The 1920s excavations led to finding a church built in the XIth century on the site of an older one. It is believed that in 1076 the coronation of Demetrius Zvonimir, King of Croatia and Duke of Dalmatia, took place there (see a relief showing it in the Baptistery of Spalato). 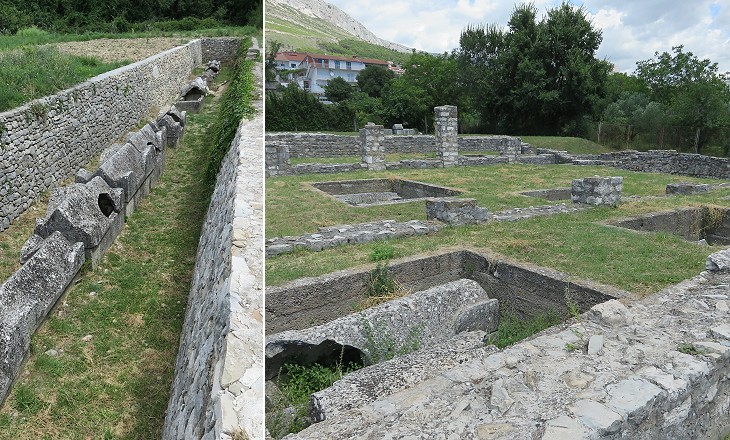 (left) Sarcophagi; (right) funerary basilica. The image used as background for this page shows a Chi-Rho, a monogram for Christ, on a sarcophagus (see a similar Christian funerary building at Tipasa in Algeria)

The excavation has been carried below the original floor level of the church, and has disclosed a most extraordinary state of things. It would seem that the whole area on which the church was built had been from early Christian times a burying place, and was as full of sarcophagi as the Alyscamps of Arles or the cemetery at Pola which supplied Dante with an image for the burning coffins of the heresiarchs. These were not removed to make way for the church, but they were covered with earth and the site was levelled over, and the new walls were simply built above them without any other preparation. Now that the floor has been dug out the tombs are again exposed, and there they lie embedded in mud at the bottom of the excavation, thrown about in strange disorder, with broken lids or no lids at all, and full of water from the last rainfall. At least fifty sarcophagi have been exposed by digging within the church below the level of the pavement, and at least a hundred more stand thickly on the ground outside the church, all of them damaged and rifled of their contents, many of them overthrown, or with their lids lying upside down beside them.
T. G. Jackson 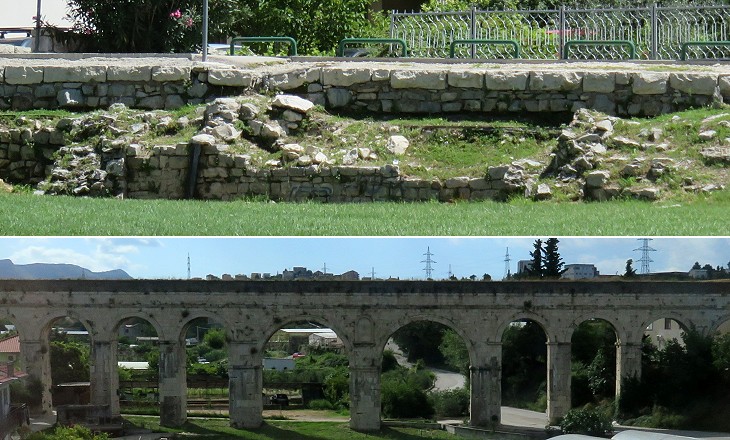 Aqueduct: (above) a section of the ancient aqueduct; (below) XIXth century reconstruction

(On the road to Salona) to the right may be seen striding across the valley the aqueduct built by Diocletian to serve his palace with water, which after a period of ruin and neglect has now been repaired, and supplies the town of Spalato.
T. G. Jackson 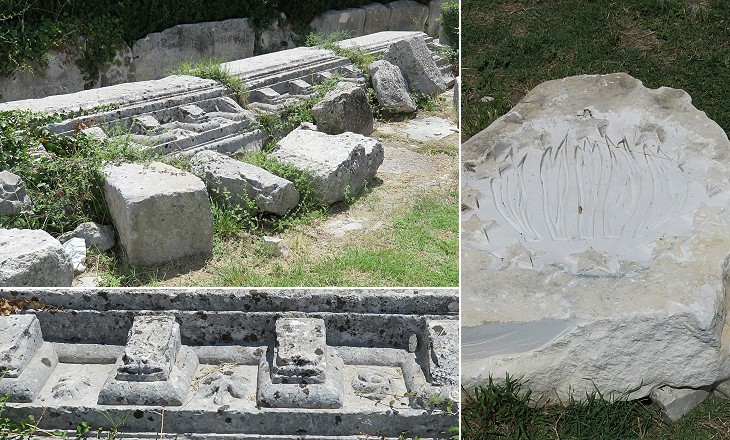 Amphitheatre: (left) lintels; (right) a sign of a very recent past carved on an ancient stone: it depicts the emblem of the Socialist Federal Republic of Yugoslavia: six torches burning together in one flame. Until 1991 it was visible everywhere in Dalmatia. Today this flame is a tragic reminder of the civil war which led to the split of the country into separate nations 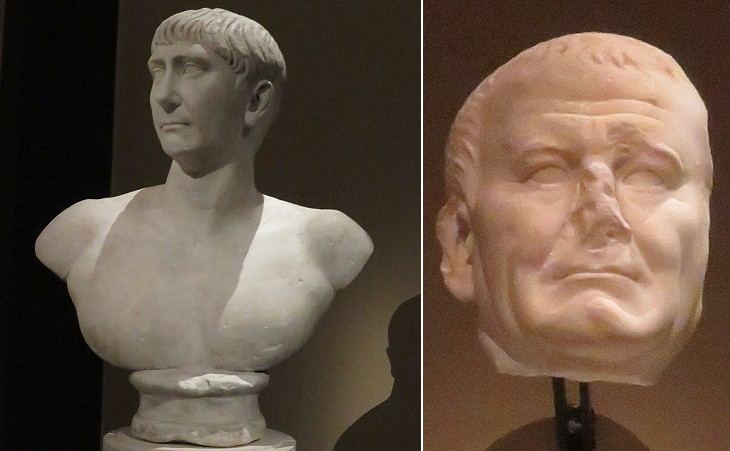