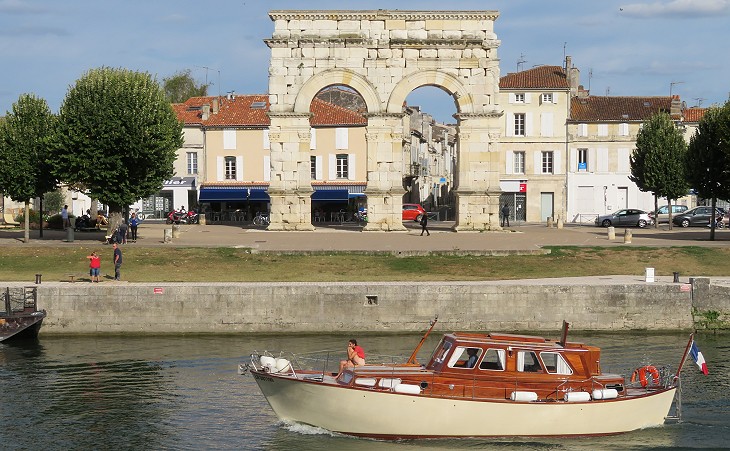 Arch of Germanicus and the River Charente

Wee arrived at Xaint that night, which is a very old Citty, being the Capitol of the Country of Xaintonge. The Citty is seated upon the River of Charannt, which passed under a Bridge between the Citty and suburbs; the Suburbs are very large and well peopled. There is to be seene, at one end of the Citty, A very ancient building of the Romans, called an Amphitheater, where they used to keepe the Lyons and wild Beastes for the sport of the People. It is of a very large compasse and hath beene a very strong building, but is now decayed. There is also in a Rocke, where this Amphitheatur is, the Picture of a Virgin, named St- Estienne, under which there is a spring, which the Papists fancy that that water hath cured many strange diseases, and as oft as any of them passe that way, they forget not their devotion to the saint.
Francis Mortoft's Journal of his travels in France and Italy in 1659
Saintes is the capital of the territory of Saintonges, in the province of Guienne. (..) It is situate on the river Charente about twenty miles to the eastward of the ocean. The city is large, but indifferently built.
Thomas Nugent - The Grand Tour - 1749
The population of Saintes amounts to 11,000. The Charente is here a tidal river, but navigable only for barges. Much eau de vie is sent down to the sea for exportation. About 18 m to the E, higher up the river on the road to Angouleme, is the town of Cognac.
John Murray III - Hand-book for Travellers in France - 1843
(Book I) It is again told Caesar, that the Helvetii intended to march through the country of the Sequani and the Aedui into the territories of the Santones, which are not far distant from those boundaries of the Tolosates, which is a state in the Province (i.e. Gallia Narbonensis). If this took place, he saw that it would be attended with great danger to the Province to have warlike men, enemies of the Roman people, bordering upon an open and very fertile tract of country. (..) Caesar decides that he ought not to wait until the Helvetii, after destroying all the property of his allies, should arrive among the Santones. (Book III) He appoints D. Brutus, a young man, over the fleet and those Gallic vessels which he had ordered to be furnished by the Pictones and the Santoni, and the other provinces which remained at peace. (Book VII) The Gauls summoned a council of chiefs and determined not to call up (according to the proposal of Vercingetorix) all who could bear arms, but to require of each chief a certain quota from his state; (..) from the Sequani, Senones, Bituriges, Santoni, Ruteni, and Carnutes, (they required) twelve thousand each.
Julius Caesar - The Gallic Wars - Translated by W. A. McDevitte and W. S. Bohn 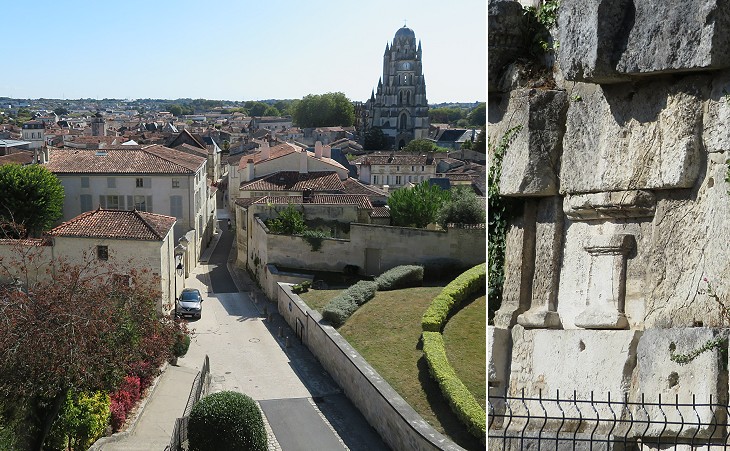 (left) View of Saintes from Place du Capitole, thus named after some Roman remains which were identified as the Capitolium of the town, on a hill on the left bank of the river; (right) nearby Roman materials

In Aquitanica are the (..) Santoni, a free people.
Pliny the Elder - Historia Naturalis - Book 4 - Translation by John Bostock and Henry Thomas Riley.
Saintes is one of the oldest cities in Gaul. Nugent
Saintes betrays in its name the antiquity of its origin, as chief city of the Santones, and has many traces to prove its importance under Roman rule. Murray
The Santones were a nation in peaceful terms with the Romans and Caesar began his Gallic campaigns to protect them from raids by the Helvetii. He also relied on them to be supplied with ships which he needed when fighting along the English Channel and the mouth of the River Rhine. They joined Vercingetorix in his revolt, but this did not impact on their overall relationship with the Romans and Pliny reports that in ca 77 AD they enjoyed the status of "free people". 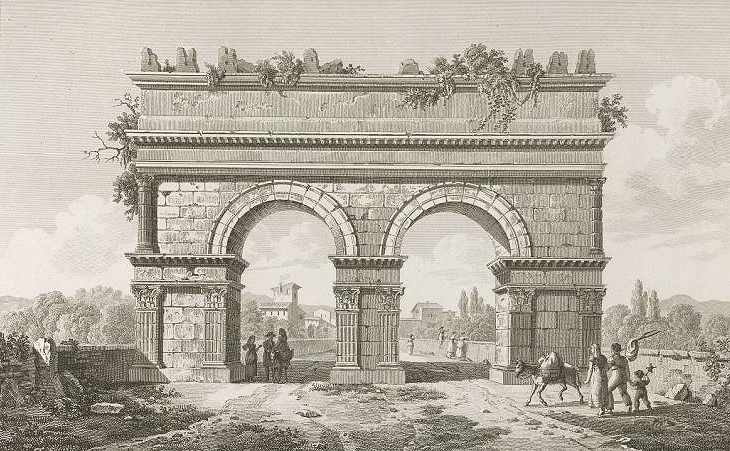 "Arc de Triomphe sur le Pont de Saintes" in a plate from "Alexandre de Laborde - The Monuments of France Chronologically Classified - 1816-1836"; the image used as background for this page shows a detail of another drawing by Laborde showing a fallen fragment of the inscription with the name of the officer who erected it

They have a great many considerable monuments of Roman antiquities, as, a triumphal arch, supposed to have been erected in the reign of Tiberius, the ruins of an amphitheatre, several aqueducts, and a capitol. Nugent
The principal and best preserved ancient monument is the Roman arch of Triumph upon the bridge over the Charente, serving now for a principal entrance into the town. (..) It was saved from destruction in 1665 by Blondel the architect who at that time rebuilt the bridge and it has been repaired very lately. (..) It is a heavy pile of masonry pierced by two arches and destitute of all architectural beauty. Murray
François Blondel (1618-1686), best known for his treatises on architecture and for having designed Porte Saint-Denis at Paris, restored the crumbling monument with the remaining stones and reduced the original height of its arches. The drawing by Laborde shows that: a) the arc stood on the bridge; b) it had a fortified attic, most likely built by the Visigoths in the Vth century to use it for the defence of the bridge; c) the stones with the inscriptions lay on the ground or were placed in one of the pillars. 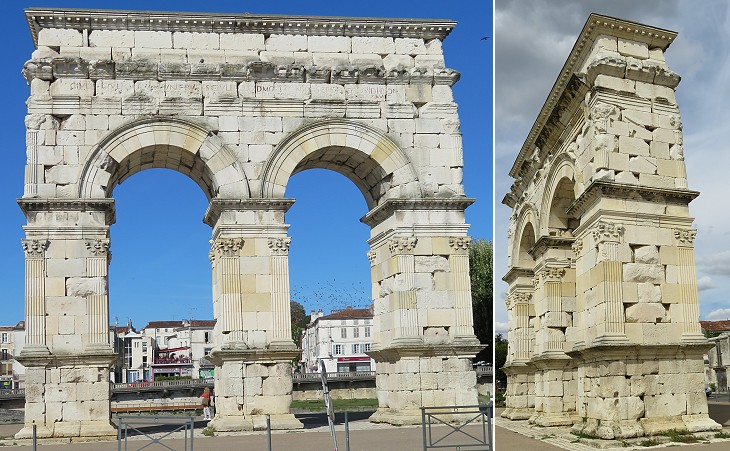 Arch of Germanicus: (left) eastern side; (right) southern side

It is constructed of a coarse limestone originally very plain and now, after the lapse of ages, much injured by the weather which has rounded the angles of the stone and converted the joints of the masonry into gaps. Murray
In the 1840s the bridge was about to collapse ad it was decided to replace it with a new one. Thanks to the intervention of Prosper Merimée (1803-1870), a French writer who at the time was Inspector-General of Historical Monuments, the stones of the arch were carefully dismantled and the monument was reconstructed in 1851, some 30 meters south of its original location. It was brought back to its assumed original height and aspect by adding new material and the stones with inscriptions were rearranged to form a coherent dedication. 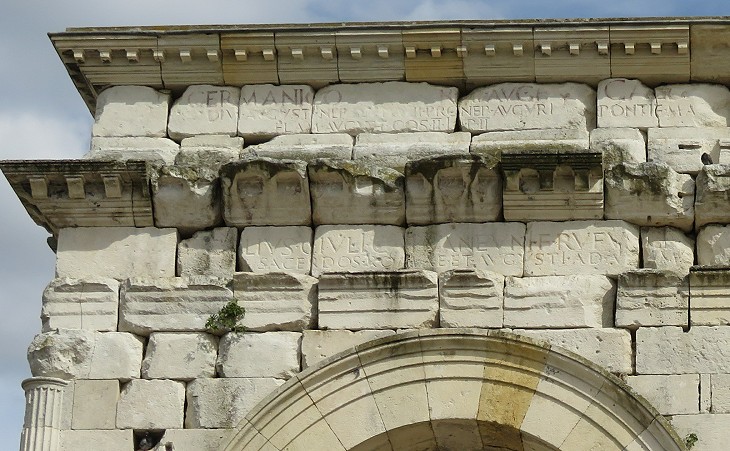 Arch of Germanicus: inscriptions on the western side: (above) dedication to members of the imperial family; (below) name and titles of the local magistrate who erected the arch and of his ancestors

Five inscriptions upon it, now half effaced, record that it was raised in the reign of Nero to the memory of Germanicus, of Tiberius his uncle, and of Drusus his father, by Caius Julius Rufus, priest of Roma and Augustus (at the altar of the Sanctuary of the Three Gauls at Lyon). Murray
The arch marked the entrance to Mediolanum Santonum of Via Agrippa, a road built at the initiative of Marcus Vipsanius Agrippa, son-in-law of Emperor Augustus, to link Lugdunum (Lyon) with the coast of the Atlantic Ocean. It did not celebrate a military campaign, but the completion of a major infrastructure, similar to Arco di Augusto at Rimini; this explains why it was not decorated with reliefs depicting winged Victories, military symbols and scenes of battles, similar to those in the arches of Orange or Glanum.
The monument is referred to as Arch of Germanicus, because this is the first name of the dedication and is easily readable. Attempts to properly integrate the missing letters of the inscriptions led to some confusion about when and for whom the Arch was built. Today historians say it was built in 18/19 AD during the second consulship of Germanicus to celebrate him, his uncle Tiberius and his cousin Julius Caesar Drusus, rather than his father Nero Claudius Drusus. 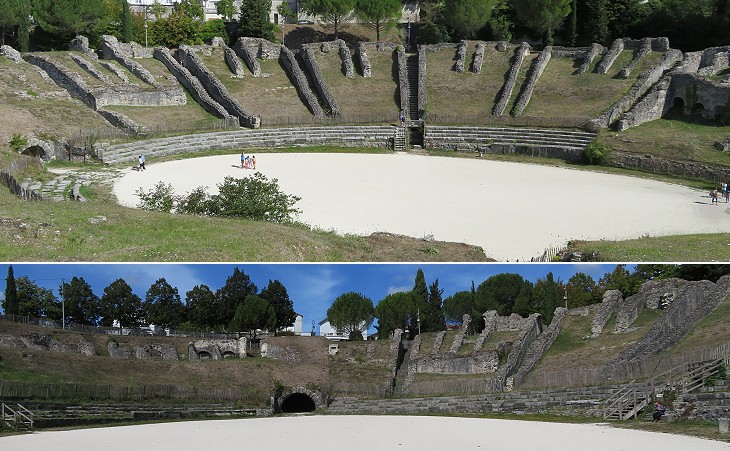 Views of the Amphitheatre (see another view in the introductory page)

There are also considerable remains of a Roman Amphitheatre near the church of St Eutrope in the faubourg. Though nearly equal in size to the grand circus of Nismes, it is very inferior in an architectural point of view, being built of small stones squared and destitute of ornament, and is now reduced to a few fractured vaults and arches. The oval of the arena measures 70 ft in its greatest length and 57 ft in width. The dens destined for the wild beasts still remain and there are fragments of an aqueduct contrived, it is supposed, to convert the arena into a naumachia for aquatic spectacles. Murray
The amphitheatre was built in ca 50 AD outside the town in a small valley (similar to what occurred at Trier) which facilitated the construction of its seating section and the access to its top. 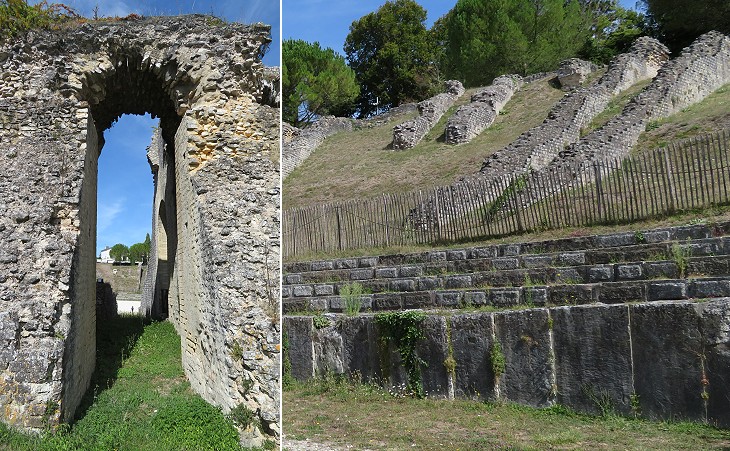 Amphitheatre: structures of the seating area

The site chosen for the amphitheatre made it unnecessary to build large vomitoria (covered passages) and entrances for the access of the public, because the upper seats were directly reachable from the hills. The shows were often based on venationes, fights with wild animals, rather than on gladiatorial combats. It is unlikely that the audience at Saintes saw the lions and leopards which were captured in Africa for the amphitheatres of Carthage and Rome; they probably contented themselves with bears, boars and wild bulls from the Pyrenees and the mountains of Central France. 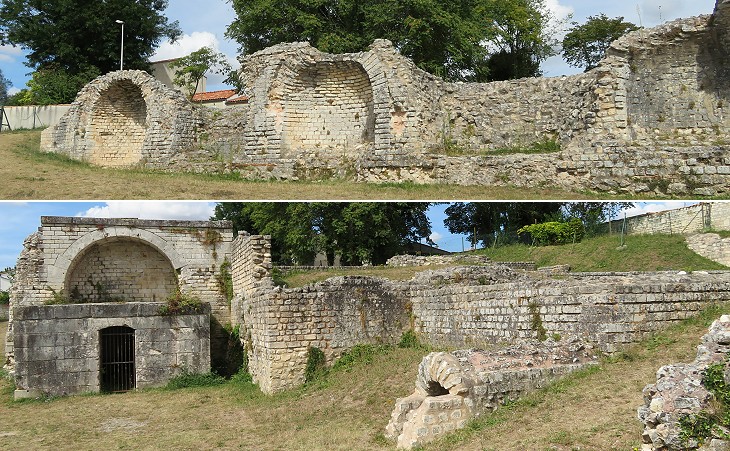 Ruin of baths of a Roman villa at Saint-Saloine

In 1820 Jean-César-Marie-Alexandre Chaudruc de Crazannes, co-founder of the French Society of Archaeology, published Antiquités de la Ville de Saintes. The book contains a chapter on the Roman baths which were discovered on a hill, north of the Roman town. He concluded his lengthy description of the bath facilities by suggesting that the City of Saintes or a group of local benefactors should buy the ruin, which is falling apart every day. He also indicated which protections were required for the preservation of the baths and he underlined the need to conduct more professional excavations to unearth the whole complex.
His advice was not followed and the area continued to belong to the Morand family who gathered a small collection of antiquities by chance excavations. Eventually they sold the collection to the City of Saintes in 1901. In 1903 the last owners (Jean Morand et Louise Berteau) turned a hall of the baths into their mausoleum. In 1904 the site was declared of national interest. 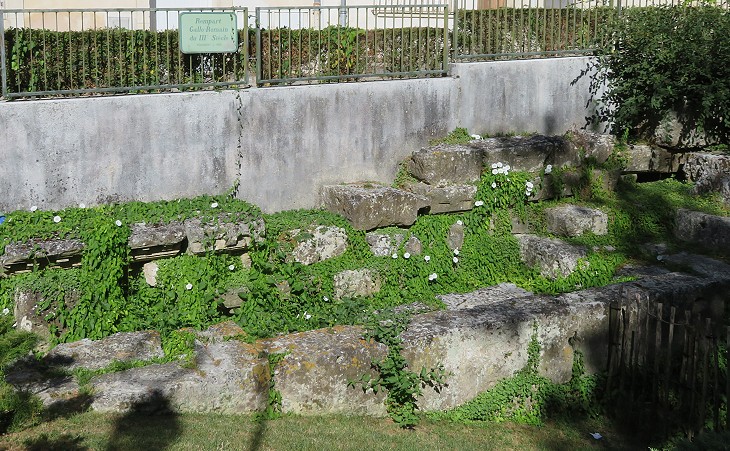 Mediolanum Santonum was the first capital of Gallia Aquitania, one of the three provinces into which the territories conquered by Caesar were divided into. It lost this function in the IInd century in favour of Burdigala (Bordeaux). In the late IIIrd century it suffered from raids by Franks or Alemanni and walls were built to protect a reduced portion of the town, similar to what occurred at Vesunna (Périgueux). 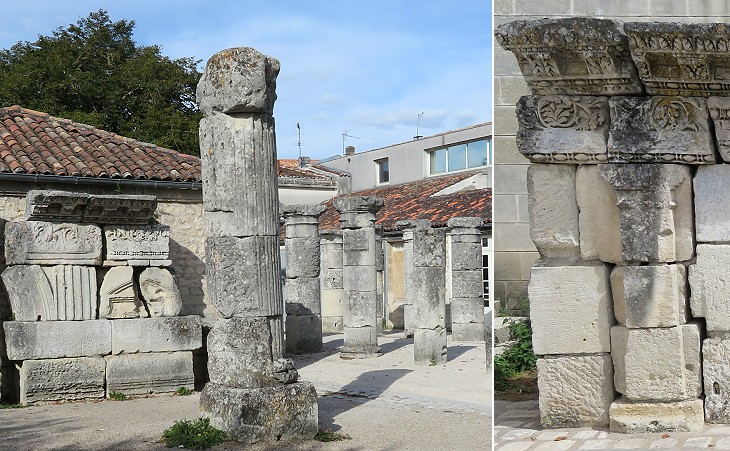 Many antique fragments, capitals, inscriptions, sarcophagi etc. are preserved in the garden of the sous prefecture. Such are the few traces of the former magnificence of the ancient Mediolanum Santonum, one of the most important cities of Aquitaine. Murray
In 1931 the archaeological collections were moved to a former slaughterhouse which was modified to give it the aspect of an ancient temple. In 2019 access had to be forbidden because the building was no longer safe. The archaeological materials which were discovered in the IIIrd century walls were placed outside, whereas some statues, reliefs and other small exhibits were on display in a small temporary location. 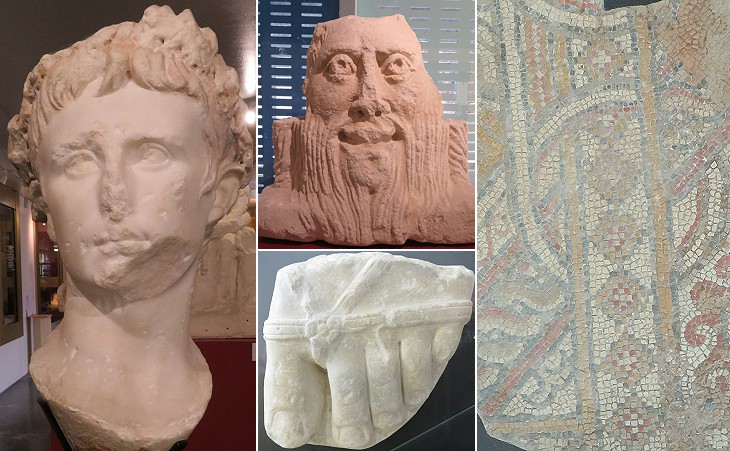 Lapidary Museum: (left) head of Augustus made at the time of Emperor Claudius; (centre-above) head of a river god, perhaps of the Charente, from the Roman baths at Saint-Saloine; (centre-below) a not very Greek foot of a colossal statue; (right) fragment of a floor mosaic