- Roman Toulouse
(relief at Glanum and quotation from Pliny: "It is More Similar to Italy than to a Province") 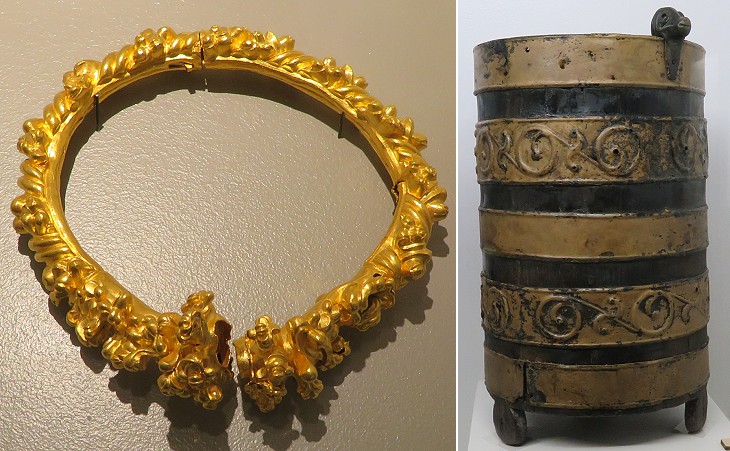 Toulouse is an ancient city, which, like all places that boast of remote antiquity, has its origin and early history obscured with fables. (..) It stands in the center of an extensive plain, which yields large crops of corn and millet; vineyards are scarce in the environs, and the wine they give is of a low quality. The Volsci Tectosages inhabited this part of Gaul at the time of the first Roman invasion in the 636th year of Rome.
Henry Swinburne - Travels through Spain in the Years 1775 and 1776 to which is added a Journey from Bayonne to Marseille.
The Volsci Tectosages are mentioned by several Roman writers; Julius Caesar indicated that they originated from the Hercynian Forest in today's Bohemia; in the IIIrd century BC they made a minor migration towards Southern France and a larger one into Anatolia, where they occupied the region of Galatia. The torc, a necklace amulet, was often the only object they (and other Celtic tribes) wore in combat (see the torc of the Dying Galatian Warrior) and it was often depicted in statues of local gods (e.g. at Bordeaux and Reims).

The towns that enjoy Latian rights are (..) the Tolosani in the territory of the Tectosages on the confines of Aquitania.
Pliny the Elder - Historia Naturalis - Book 3 - Translation by John Bostock and Henry Thomas Riley.
The Romans came into contact with the Tectosages after they founded Narbonne in 118 BC. They subjugated the Tectosages and conquered Tolosa Tectosagum in 106 BC. The position of the town which was within easy reach from the Mediterranean coast and was located along the River Garonne which emptied into the Atlantic Ocean, favoured its development as a Roman emporium for selling wine and luxury objects to the Gallic tribes of Aquitania. In the Ist century AD the town was moved five miles northwards to its current location, probably because it was more suited for the construction of harbour facilities.

We arrived that day at Toulouze, where as wee rid along wee could easily discerne the Pyrenian Mountains, which are counted 34 leagues distant from that place. Wee could also perceive the snow on the mountaines which continues there winter and summer. Toulouse is the Capitol Citty of Languedoc, a very ancient and large Citty, replenished with many faire Buildings of Bricke. (..) The Hotel de ville hath always A guard at the gate, where noe stranger is permitted to enter unlesse he leaves his sword at the gate and hath a souldier to conducte him. All the Inhabitants in this Citty are Papists.
Francis Mortoft's Journal of his travels in France and Italy in 1659
The situation of this city is extremely pleasant, in a large fruitful plain, on the river Garonne, which divides it into two unequal parts, that communicate by a great stone-bridge. (..) The honour of building a capitol was conferred by the Romans, only on the largest towns that were Roman colonies (see a good example of this temple at Thugga, a Roman colony in Tunisia); that of Toulouse was dedicated to Jupiter, and built on a high ground; till the thirteenth century it was used as a town-house from whence their eschevins (magistrates) were called capitouls. (..) The town-house is a magnificent building.
Thomas Nugent - The Grand Tour - 1749
The Place du Capitole once Place Royale, a handsome (..) square (..) is the centre of bustle and traffic; the chief market-place and the point of departure of the main thoroughfares. It is named from le Capitole or Hotel de Ville, so called either from the tradition that in the time of the Romans the Capitol of the Tolosates may have stood here or from the meetings of the civic chapter (capitolium) whose members were also called capitouls on this spot. The building presents externally a modern front finished 1769, with eight columns of red Pyrenean marble in the centre.
John Murray III - Hand-book for Travellers in France - 1843
Today the Place du Capitole is believed to have stood at the northern end of the Roman town at the beginning of cardo maximus, its main north-south street. Evidence of the Forum and of the Capitolium, the temple dedicated to Jupiter, Juno and Minerva, the three deities who were worshipped on the Capitoline Hill of Rome, were found in the 1990s at Place de l'Esquirol, south of Place du Capitole, during excavations for the construction of an underground parking facility. 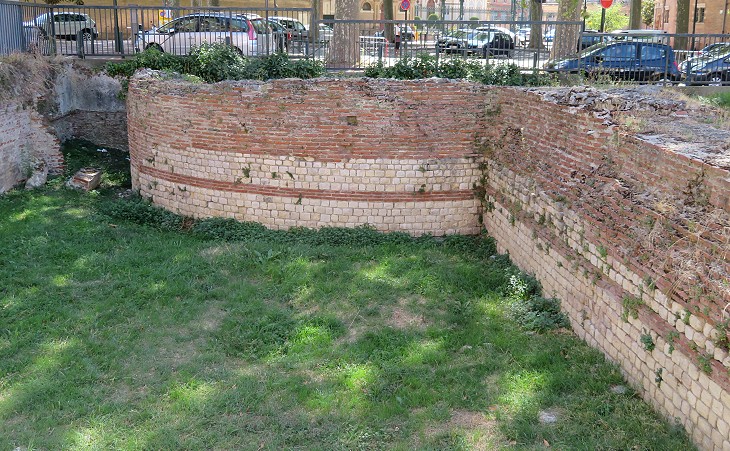 Evidence of the eastern walls and towers

In 1973, during the demolition of a building, a stretch of the Roman walls was found and, unlike what occurred in other occasions, it was decided to preserve it. The walls were built in the Ist century AD by using bricks, something which characterizes the architecture of the town through the centuries. The Roman town had three gates (N, E and S); the western side along the Garonne did not have a gate because there was not a proper bridge, although the river was crossed by an aqueduct. 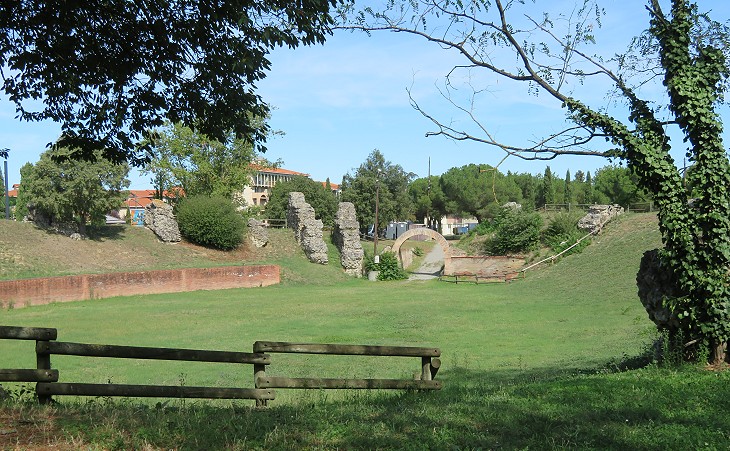 This is a city of great antiquity, being mentioned in history as one of the most flourishing towns of Gaul. (..) The Roman Antiquities are also worth a traveller's notice; there being still the remains of an amphitheatre, some temples, aqueducts, and a capitol. Nugent
The Romans decorated it with many noble structures, but no other vestiges of them are left, than the brick arches of a small amphitheatre. Swinburne
The amphitheatre is situated at Purpan, on the left bank of the river, whereas Roman Toulouse stood on the right one and at a distance from it; maybe it was not the only amphitheatre of the town. 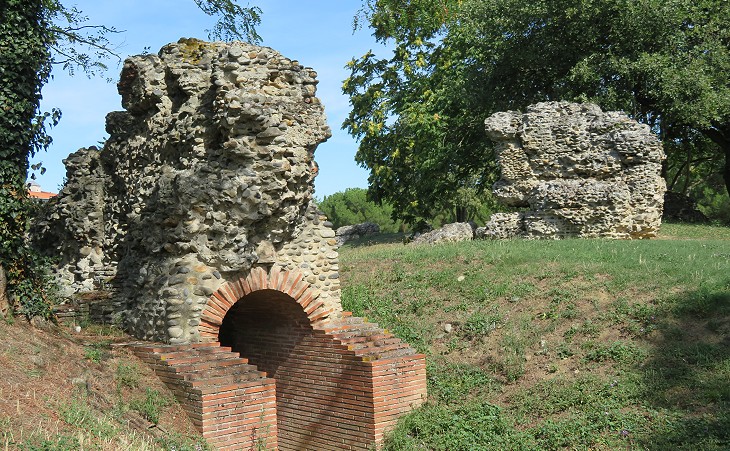 The amphitheatre is dated Ist century AD and it was enlarged in the IIIrd century when it could house an audience of 12,000. It was most likely decorated with pillars, friezes and other architectural elements, but the site was abandoned and not properly excavated until the 1980s when it was acquired by the City of Toulouse. The image used as background for this page shows a lamp which was decorated with a gladiatorial combat (Musée Saint-Raymond). 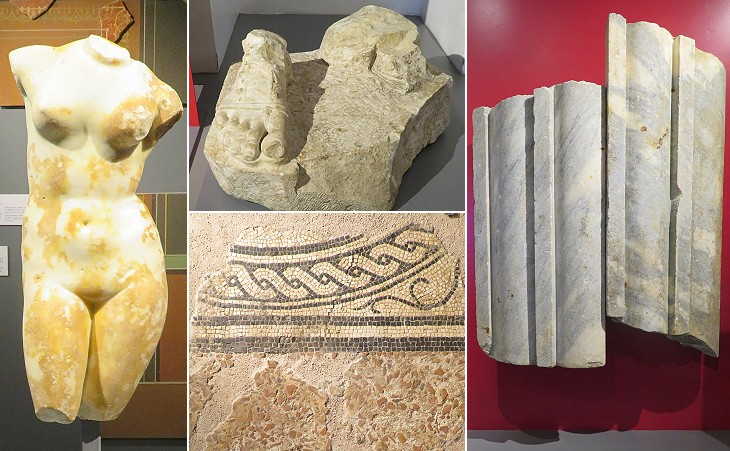 The Museum has, in addition to a small series of Egyptian sculptures, numerous inscriptions, Roman and Gallic votive altars with fragments of statues and of marbles showing that the quarries of the Pyrenees were worked by the Romans from various places in Languedoc and the Pyrenees. Murray
The Museum of Toulouse was inaugurated in 1795 in the premises of a former Augustinian convent. In 1892 its collection of antiquities was moved to the old hospital of Saint-Raymond, near Basilica of Saint-Sernin. 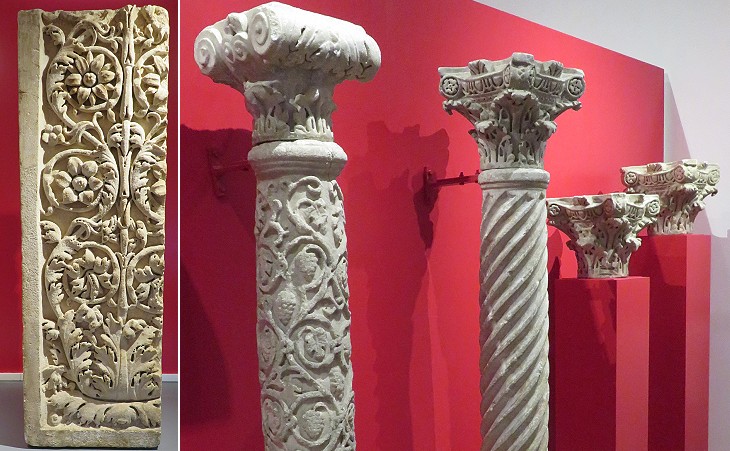 The parish church of Daurade is one of the handsomest in town, and was formerly a heathen temple dedicated to Apollo. The Daurade, belonging to the Benedictins, is noted for the Mosaic paintings in the choir, the organ, and the baptistry. Nugent
Daurade, the Golden One, was an XIth century church which was built on the site of a dodecagonal Roman temple to Apollo; it owed its name to its golden mosaics. Its dome was rebuilt in 1760, but because it was too heavy, the whole building was about to collapse and it was entirely dismantled in the following year; the majority of its columns and capitals were made in the XIth century, but a few of them belonged to the Roman period.

The Church of St. Taur, situated in the street leading from the Capitole to St Sernin, derives its name from the wild bull to whose horns the body of the martyr St Saturnin was bound by his heathen persecutors. The struggles of the furious animal having detached it from the cords on this spot, a church was in consequence erected. That at present existing has nothing remarkable, but its flattened fronton belfry surmounted by angular arches. Murray
According to legend, the church was built on the exact spot where the body of St. Saturnin (Sernin), first bishop of Toulouse, became detached from the bull that dragged the martyr to his death. The tale perhaps originated from the bull of Mithra which the Christians regarded as an evil symbol. 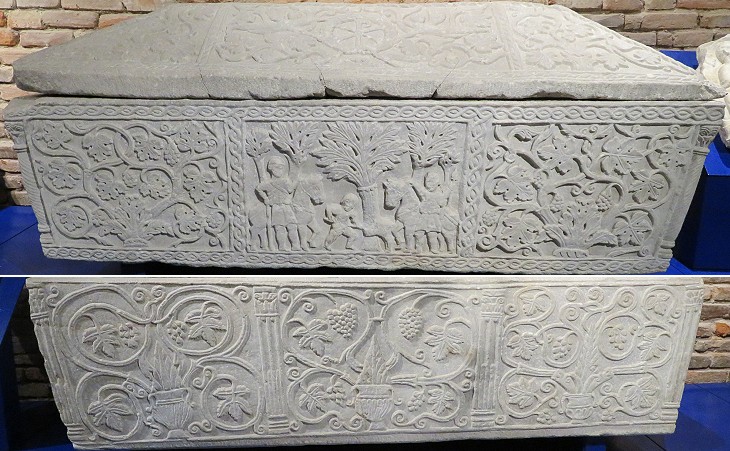 The Museum has early Christian tombs, sarcophagi and coffins, covered with sculpture rude and debased in point of art, but showing Roman influence, bearing Christian symbols (the cross XP, the vine branch, etc.), combined with heathen subjects. Murray
Reliable historical records about Saturnin do not exist, but there are accounts about Rodanius, Bishop of Toulouse who attended a council at Baeterra (Béziers), a town east of Narbonne, in 356. He opposed Arian theological principles which were supported by Emperor Constantius II and was therefore exiled. The event indicates that Toulouse had already a significant Christian community.

(left) River Garonne seen from the left bank; (right) Musée Saint-Raymond: model of the remains of a Visigoth palace which were unearthed in 1988 on the right bank of the river on the site shown in the previous image

Toulouse continued to form a province of the Roman empire, till Honorius, finding himself hard pressed on every side by shoals of barbarians, endeavoured to save the main body of his dominions from destruction, by yielding a few distant members to some nations in preference to others, and thereby sowing dissension among them; with this view he, in 400, ceded the province of Narbonne to the Goths. Swinburne
Toulouse is interesting from its historical souvenirs as the capital of the kingdom of the Visigoths from 413 to 507, when it was destroyed by Clovis, King of the Franks on the battle field of Vouille near Poitiers. Murray
The Visigoths established a kingdom in Southern France which eventually included most of Spain. The southward expansion of the Franks ended at Toulouse, as they did not conquer Narbonne and the Mediterranean coast which continued to be controlled by the Visigoths. This caused the sudden decline of Toulouse which lost its role of trading centre and became a frontier town.

Move to Roman memories in the environs of Toulouse or to Basilica of Saint-Sernin or to Other medieval monuments of Toulouse.