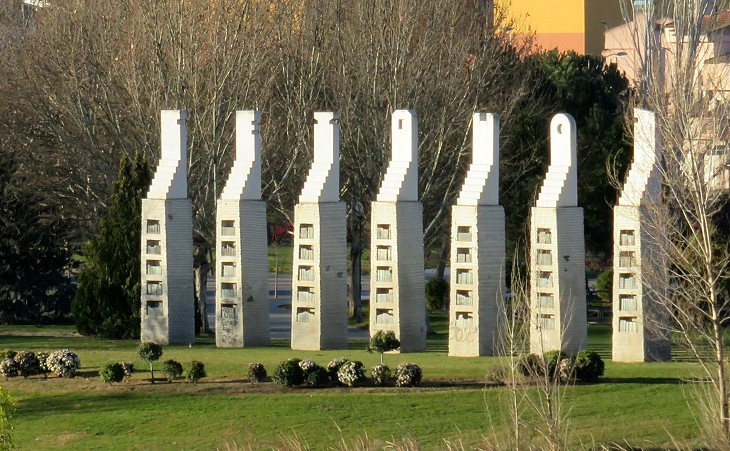 Las Siete Sillas in a park near Puente Lusitania

Continuing outside the town to the E. is the theatre, called las Siete Sillas, the Seven Chairs from the seven divisions of the seats, where, according to tradition, several Moorish kings sat to decide the fate of the city.
Richard Ford - A Handbook for Travellers in Spain - 1855
In 2001 Rufino Mesa Vazquez designed these stone sculptures with shelves containing bronze books as a tribute to what had been for centuries the main evidence of the glorious past of Roman Merida. 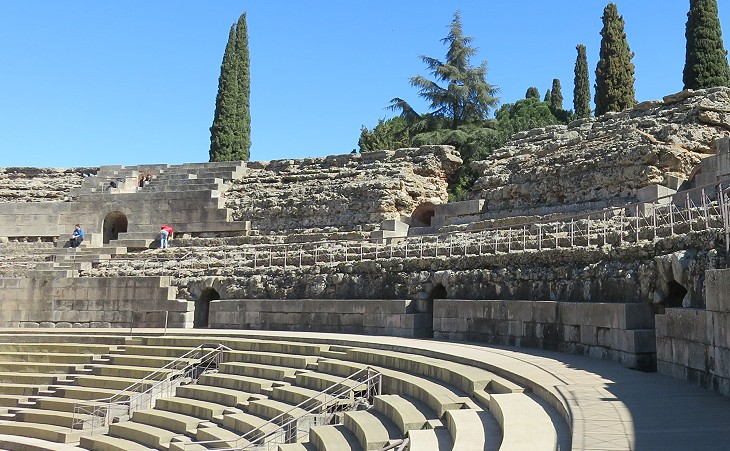 It is almost perfect, nothing is wanting but the proscenium. The vomitories are quite uninjured. (..) The Spaniards, by adding to the stern solidity of the Roman work another half-circle in paltry brick nogging, had turned this theatre into a Plaza de Toros; this the French destroyed, and the modern portion is now a worse ruin than the ancient one. Ford
The site was excavated in 1910 and the whole structure of the Roman theatre was brought to light. 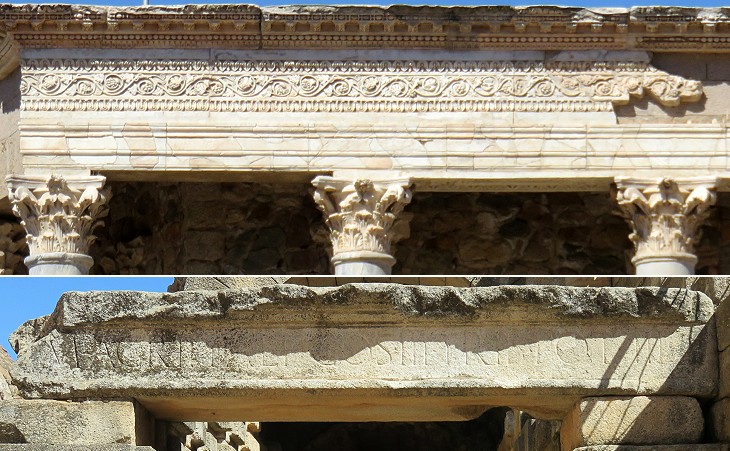 The theatre was built at the initiative of Marcus Vipsanius Agrippa, son-in-law of Emperor Augustus. The stage and the scenae frons were redesigned at the time of Emperor Hadrian. Agrippa and Hadrian had a role also in the construction and redesign of the Pantheon of Rome; the inscriptions naming Agrippa are almost identical. The theatre could seat an audience of ca 5,500 and was the largest in Spain. 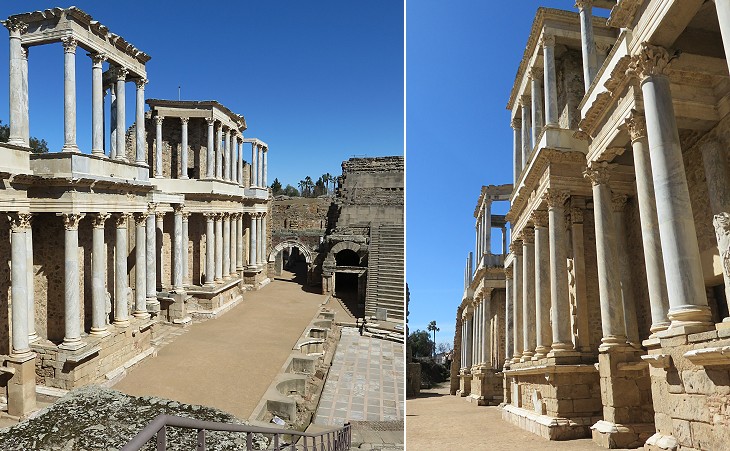 Theatre: (left) stage; see another image of it in the introductory page to this section; (right) "scenae frons"

The scenae frons was almost entirely reconstructed in the 1960s and 1970s with columns and other materials found on the site. Archaeologists were helped in their task by the analysis of the structures of Roman theatres which were less damaged by the ravages of time, e.g. at Bosra in Jordan or by previous reconstructions e.g. at Sabratha in Libya. 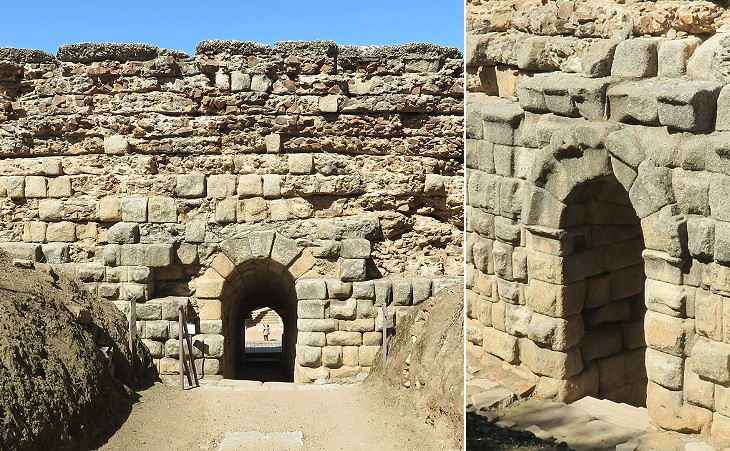 Theatre: (left) external wall; (right) one of the entrances

The theatre was partially excavated into a low hill. The wall supporting the seating section is plain with only some mouldings and projecting stones at the entrances, without the porticoes which can be seen in other Roman theatres, e.g. at Teatro di Marcello in Rome. 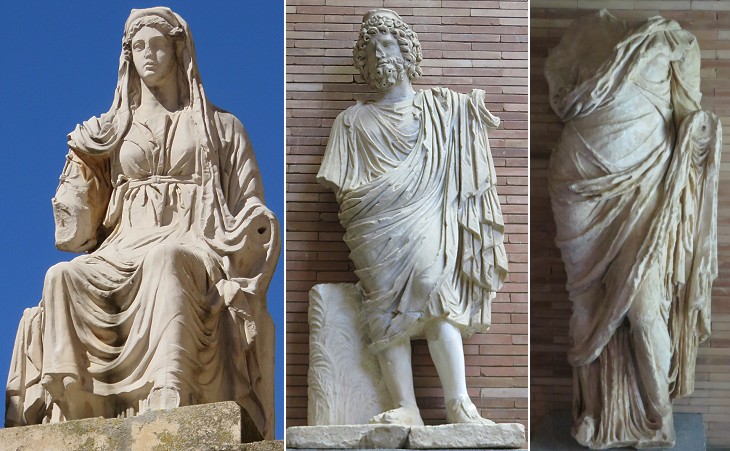 Statues of the theatre: (left) copy of a statue of Ceres perhaps Livia, Augustus' third wife, very similar to one found near Cordoba; (centre/right) Museo Nacional de Arte Romano of Merida: Pluto and Proserpina (see them in a famous statue by Gian Lorenzo Bernini)

Aqueduct of Los Milagros carried water to Merida from a pool named after Proserpina, the daughter of Ceres who was abducted by Pluto while she was picking flowers near a small lake. Eventually Jupiter decided that Proserpina should spend six months in the Hades with Pluto and six months with her mother on the Earth. The three deities were portrayed in statues which decorated the theatre and most likely they were chosen because the myth of Proserpina is a metaphor for the Four Seasons, a popular decorative subject. 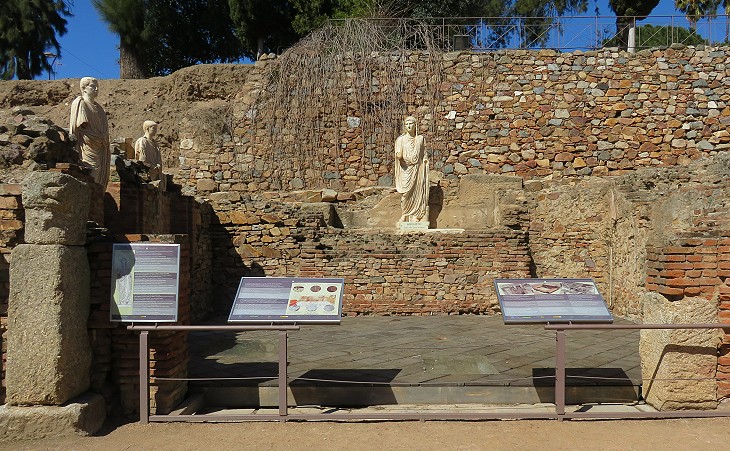 Hall to Augustus near the theatre

A small rectangular hall was initially believed to be a library aatached to the theatre, but after the discovery of a head of a statue of Emperor Augustus, archaeologists came to the conclusion it was dedicated to the imperial family, perhaps by the local Augustales, members of a religious college of freedmen which existed in many Roman towns, e.g. at Herculaneum, and had the aim of celebrating ceremonies in honour of the emperor. 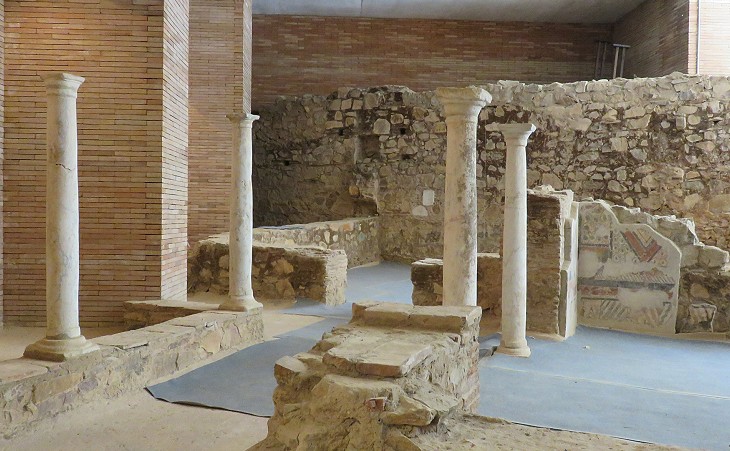 House near the theatre

The excavations aimed at freeing the structures of the theatre and of the nearby amphitheatre led to the discovery of a Roman house with some interesting frescoes. The image used as background for this page shows a detail of one of them. Eventually Museo Nacional de Arte Romano, the archaeological museum of Merida was built above the house which is now one of its most interesting exhibits. 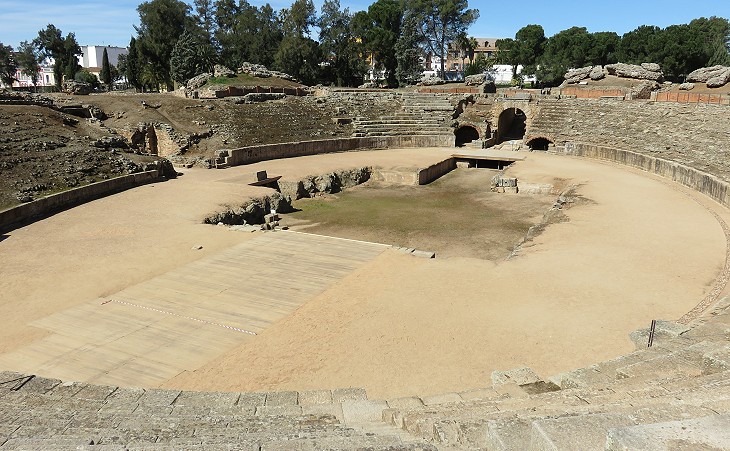 Near it is what was the amphitheatre, or, as some contend, the Naumachia (a facility for naval battles): it has been much used up both by the Moors and Spaniards as a quarry. When last we were there, a bacon-eating keeper of pigs had constructed in it a sort of shed, and was a living type of the oriental idea of an outcast, "who lodges in monuments and eats swine's flesh" (Isaiah Ist. 4). Ford 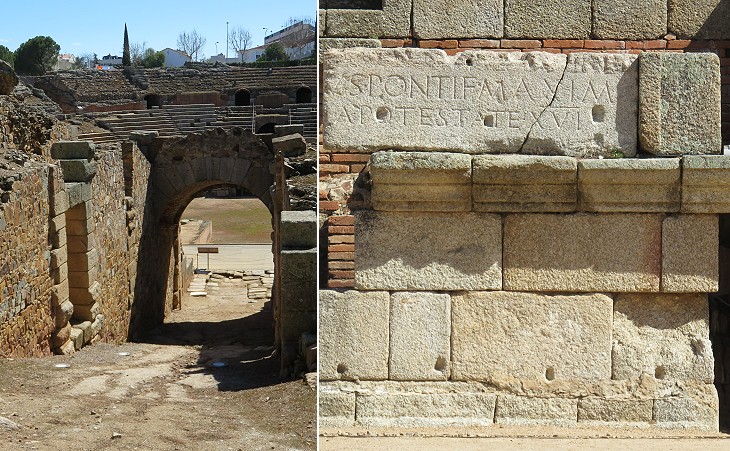 The amphitheatre was inaugurated in 8 BC and the inscription celebrates Emperor Augustus. It could seat approximately 15,000 spectators. The excavations unearthed most of ima cavea, the lowest tier of seats which was reserved to the magistrates and the richest citizens, and some supporting structures of the media cavea, the middle tier. 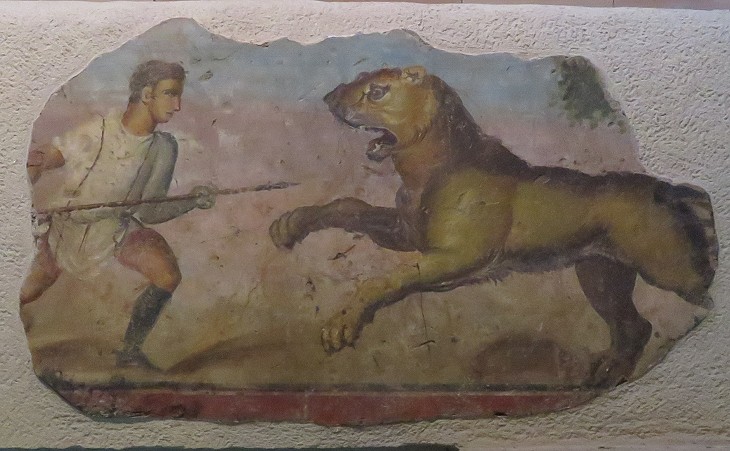 The fresco shows a hunting scene in the wild with a tree in the background, but it actually depicts a venatio, a fight between a man and a wild animal, which spectators could watch in the amphitheatre instead of gladiatorial combats. The Roman provinces of northern Africa supplied the amphitheatres of Europe with a variety of animals from ostriches and boars to lions and elephants. There are many interesting mosaics showing these wild beasts, how they were captured and how they were transported across the sea. Not all the animals were killed in the amphitheatres, some of them were only paraded in a sort of modern circus-type show. 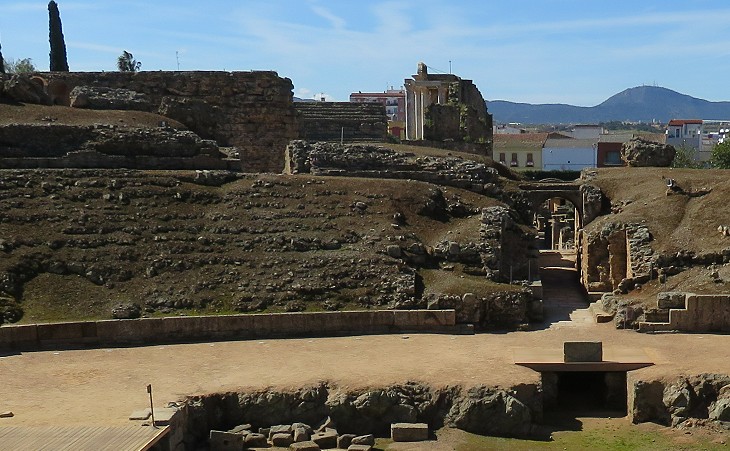 Seating section of the amphitheatre with the theatre in the background 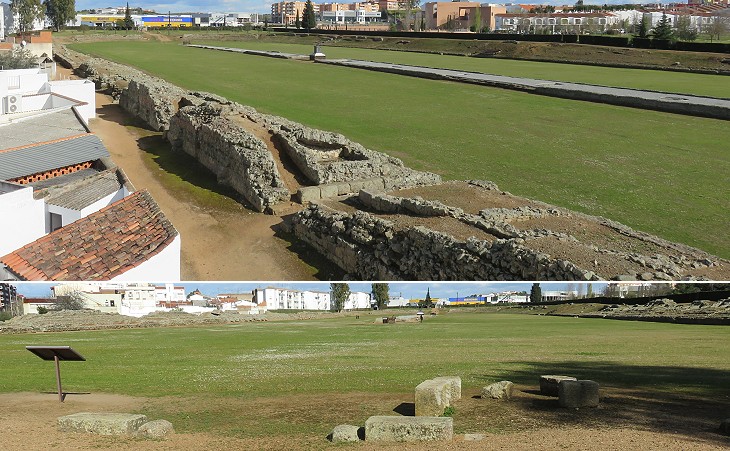 Circus: (above) seen from its eastern end; (below) western end where the "carceres" (the cages from which the chariots started the race - see them in a mosaic at the Museum of Bardo in Tunis) were located

The Circus Maximus lies in a hollow to the rt. of the Madrid road, and is so well preserved that a chariot-race might easily be given there. The area of this hippodrome is now a corn-field, but the central elevation on which the spina, meta, etc., were elevated, is perfect with its original pavement. The whole length is some 1866 ft. by 885. The outer walls are of prodigious thickness: the 8 tiers or rows of seats for spectators still remain. Ford 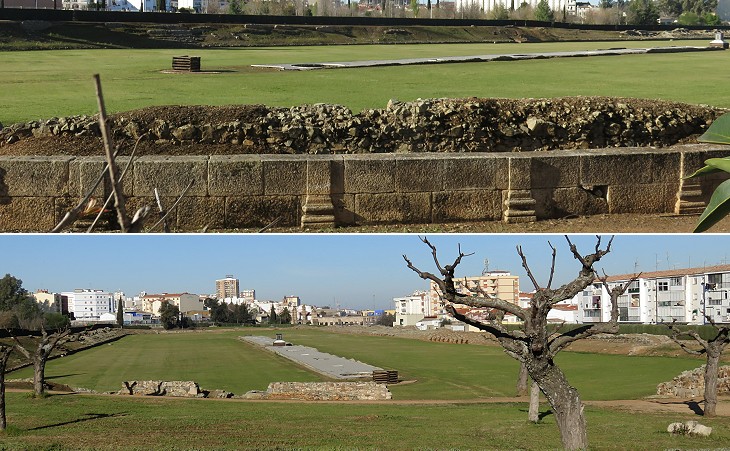 Circus: (above) a view showing the decoration of its outer walls; (below) view from its eastern end showing Aqueduct of San Lazaro in the background

Unlike the theatre and the amphitheatre, the inauguration of the circus is not exactly dated by inscriptions, however it is thought it was built at approximately the same time. That means that Merida had three large facilities for entertainment shortly after its foundation. The circus must have been decorated with statues, small temples, obelisks and metae, conical poles which indicated the turning points, similar to what occurred at the Circus Maximus of Rome. 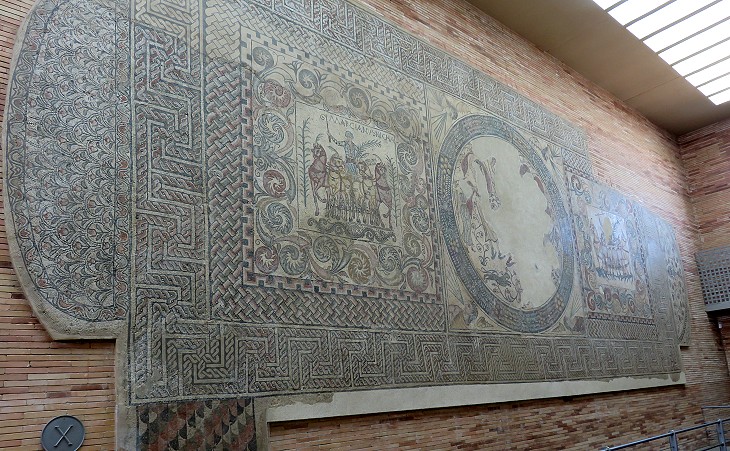 The audience of the circus could reach 30,000 and there is evidence that it was utilized also after the theatre and the amphitheatre were closed at the instance of bishops, who, similar to St. Augustine, regarded their entertainments as occasions for sin and a distraction from prayer. Chariot races became even more popular, especially at Constantinople. 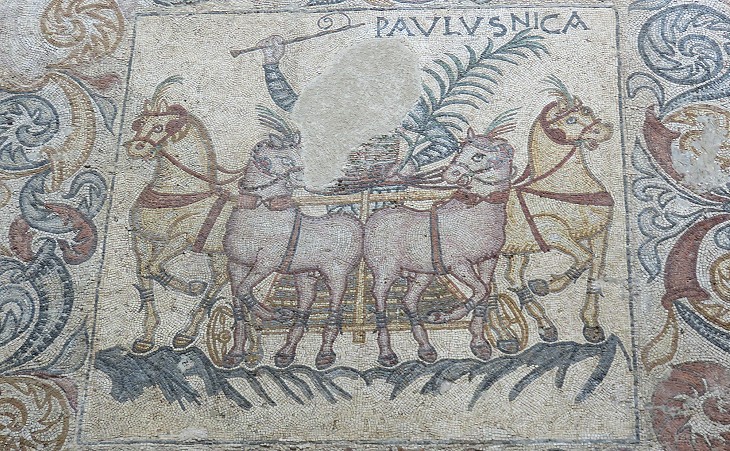 Move to Introduction and City Centre or Bridges, Aqueducts and Baths or Other Roman Monuments and Exhibits from the Museums or Visigothic and Moorish Merida.