- Antequera
(left - Mosaic at Italica; right - decoration at the Alcazar of Seville) 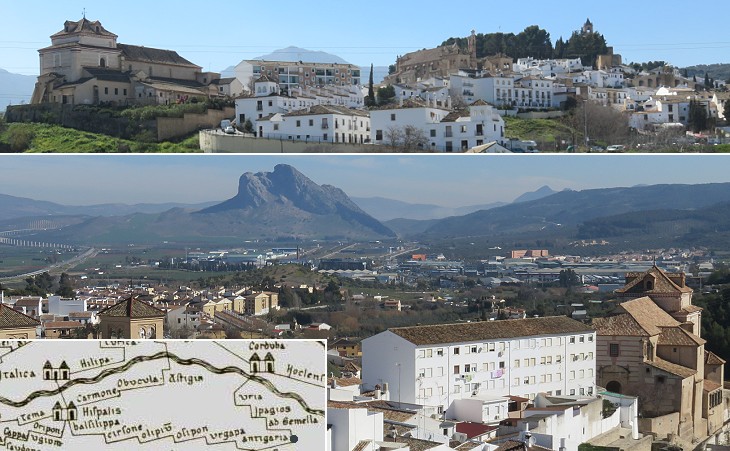 (above) View of the town: (left) El Carmen; (right) Santa Maria la Mayor and the castle; (below) view from Santa Maria la Mayor towards Peña de los Enamorados, an isolated mountain; (inset) detail of "Tabula Peutingeriana", a Vth century map of the roads of the Roman Empire; it shows Anticaria (Antequera) on the road between Cordoba and Hispalis (Seville)

Antequera, "Anticaria" was in the time of the Romans, as now, an important city of the second order. (..) The Peña or Peñon de los Enamorados rises like a Gibraltar out of the sea of the plain. (..) Here, it is said, a Moorish maiden, eloping with a Christian knight, baffled their pursuers by precipitating themselves, locked in each other's arms, into a stony couch.
Richard Ford - A Handbook for Travellers in Spain - 1855 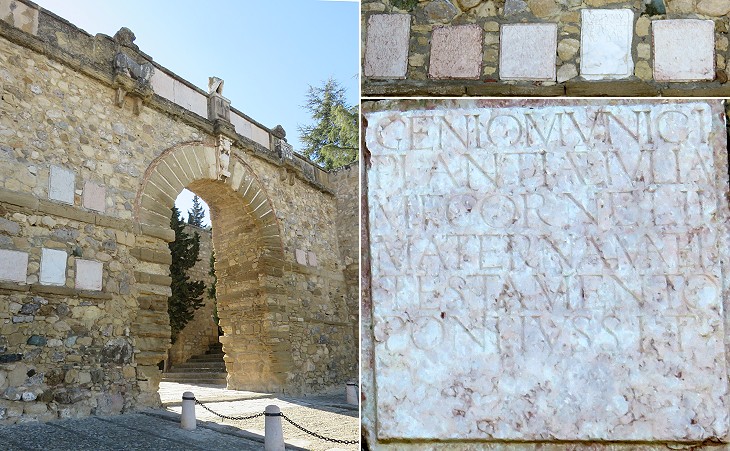 The remains of a palace and a theatre, almost perfect in 1544, were used as a quarry to build the convent of San Juan de Dios; a few fragments were saved by Juan Porcel de Peralta in 1585, and are imbedded in the walls near the Arco de Gigantes, going to the castle court. Ford
The inscription shown above states that Anticaria was a municipium, i.e. it had the status of town. Roman baths seen from the terrace near Santa Maria la Mayor; the image used as background for this page shows a head of Ocean, at the centre of the mosaic

The nucleus of Roman Anticaria was probably under the mediaeval castle.
The Princeton Encyclopedia of Classical Sites - 1976
Apart from historical records and some inscriptions there was no other evidence of Roman Anticaria until 1988, when chance excavations at the foot of the hill unearthed public baths which are dated IIIrd century AD. The establishment was small, but it had all the facilities of a typical Roman bath, including three halls (hot, tepid and cold), a pool and a palaestra for exercising. 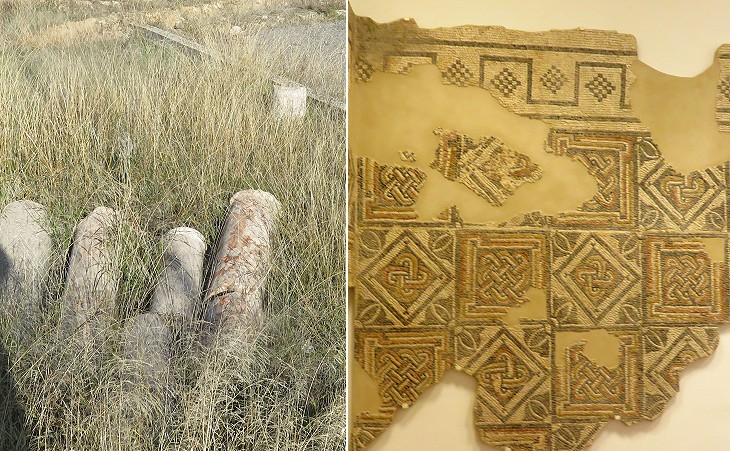 A Roman villa was excavated in 1998 outside the modern town; a number of interesting findings were moved the Museum of Antequera, but the site is not yet open to the public. A number of other villas have been found in the environs of Antequera and several mosaics have been moved to museums. 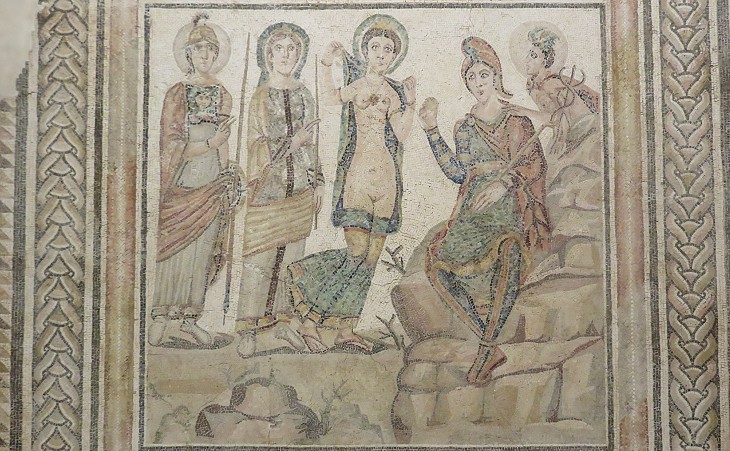 Archaeological Museum of Seville: mosaic depicting the Judgement of Paris from a Roman villa at El Alcaparral (Casariche) near Antequera (now at the Museum of Casariche)

In the thickest groves of Ida (..) the grandson of great Atlas and Pleione (Mercury), borne through the air on nimble wings, stood before my eyes. (..) The God stood, and in his sacred hand was a golden rod: three Goddesses too, Venus, Juno, and Pallas, gently pressed the grass with their tender feet. I stood amazed, and a chilling horror raised my hair in bristles; when the winged messenger thus addressed me: "Banish fear; you are appointed the judge of beauty; settle therefore the contests of the Goddesses, and name one who must claim the prize of beauty from the other two."
Ovid - The Epistles - Paris to Helen - translation by R. Ehwald
In 1985 other chance excavations unearthed a Roman villa with a very interesting mosaic. It is dated IVth century AD. It depicts a typical pagan subject and it follows the traditional iconography, but the haloes of Mercury and of the goddesses prefigure those of saints. 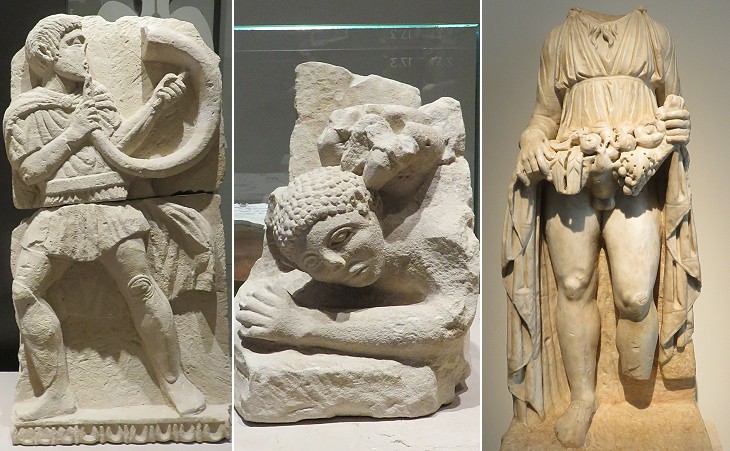 National Archaeological Museum of Madrid: (left) reliefs of a heroon-type monument which were reemployed in the construction of the walls of Osuna between Antequera and Seville during the war between Julius Caesar and Pompey; (right) statue of Priapus (Ist century AD) from a villa near Antequera; such statues were placed in Roman gardens to ensure growth and act as protectors of crops (see another Priapus in Syracuse)

While the most recent findings in the region around Antequera are in local museums or in that of Seville, the earliest ones are in Madrid.

National Archaeological Museum of Madrid: bronze inscription with a fragment of "Lex Ursonensis", the foundation charter of the Caesarean Colonia Iulia Genetiva at Urso near Osuna (see a similar lengthy bronze inscription at Italica) 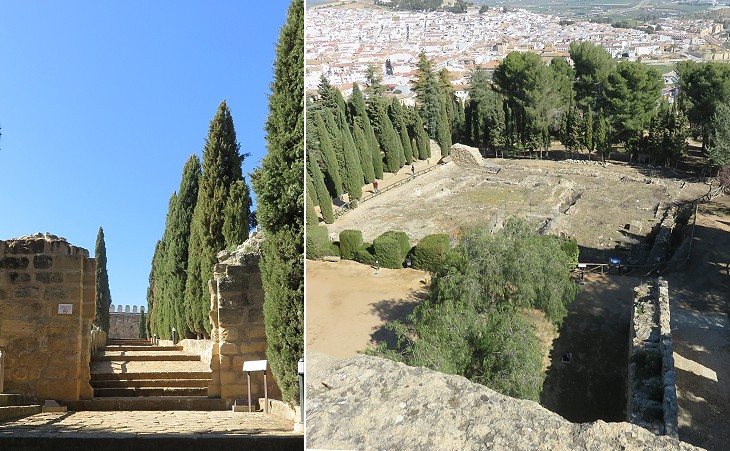 Alcazaba (citadel): (left) access to the fortress; (right) evidence of old buildings inside it

The castle is Moorish, built on Roman foundations. (..) It is much dilapidated. (..) The curious old mosque in the enclosure was converted by the French into a store-house, but the magnificent Moorish armoury disappeared when the city was sacked by them. (..) When we were last at Antequera the governor was in the act of taking down the Moorish mosque, to sell the materials and pocket the cash. Ford 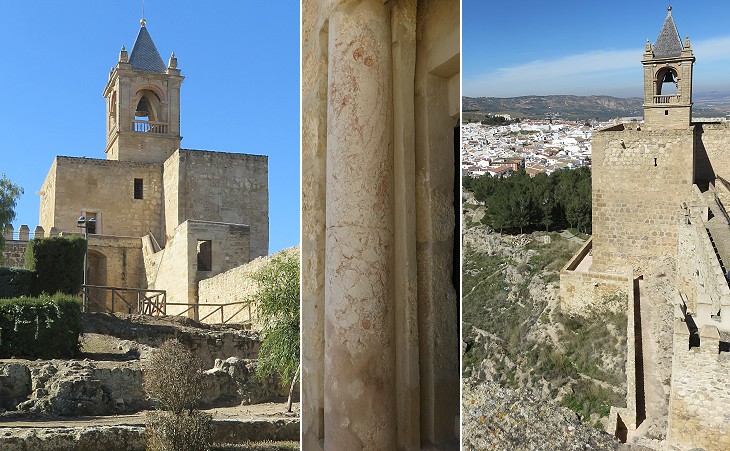 Alcazaba: Torre del Homenaje (keep) and an ancient column at its entrance

Ascend the Torre Mocha (trimmed, because in origin it was taller), with its incongruous modern belfry (a 1582 chapel). Ford
The Arab conquest of Antequera was not a big event, because the town had lost importance and it did not regain it until the XIIIth century. At that time it was part of the only remaining Muslim kingdom in Spain, i.e. the Emirate of Granada. After the 1248 conquest of Seville by the King of Castile, it became a frontier town, similar to Ronda, and its fortifications were strengthened. 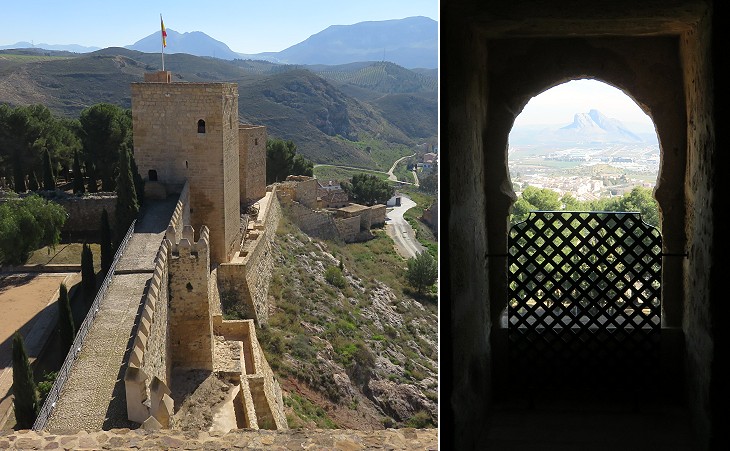 Alcazaba: (left) view of the towers; (right) view of Peña de los Enamorados from the tower with the flag

Early in the morning (May 4th, 1829) I strolled to the ruins of the old Moorish castle, which itself had been reared on the ruins of a Roman fortress. Here, taking my seat on the remains of a crumbling tower, I enjoyed a grand and varied landscape, beautiful in itself, and full of storied and romantic associations; for I was now in the very heart of the country famous for the chivalrous contests between Moor and Christian. Below me, in its lap of hills, lay the old warrior city so often mentioned in chronicle and ballad. (..) Beyond spread out the vega (fertile lowland), covered with gardens and orchards and fields of grain and enamelled meadows, inferior only to the famous vega of Granada. To the right the Rock of the Lovers stretched like a cragged promontory into the plain.
Washington Irving - Tales of the Alhambra - 1851 Revised Edition 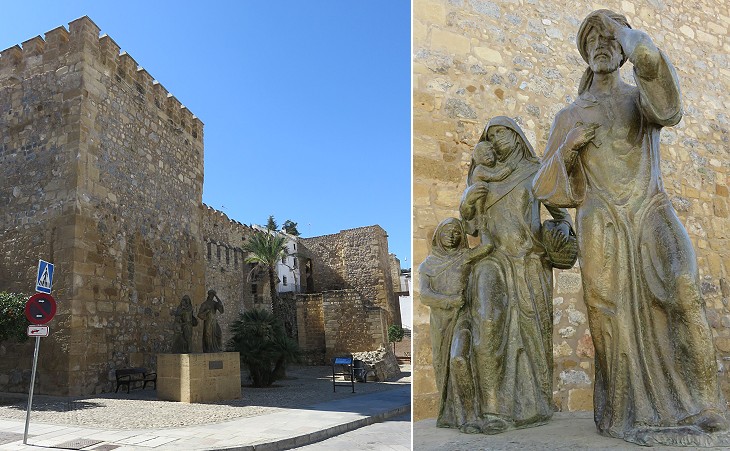 Antequera (Antikeyrah) was recovered from the Moors in 1410 by the Regent Fernando, who hence is called El Infante de Antequera. Ford
After a six month siege, the Castilian troops managed to storm the walls of the city through the only weak point in their defences, now the Plaza del Carmen. The attackers had to fill in the moat, demolish the barbican, breach the walls and harass the defenders from the top of mobile wooden towers in order to be able to finally storm the main tower through the use of a huge wooden ladder.Eventually the population surrendered and were exiled to Granada where they founded the neighbourhood Antequerela at the foot of the Alhambra. Today the area is known as Realejo, but it retains two streets named after Antequerela. The Castilians, fearing that the Emir of Granada could try to conquer back the town restored and strengthened its fortifications. 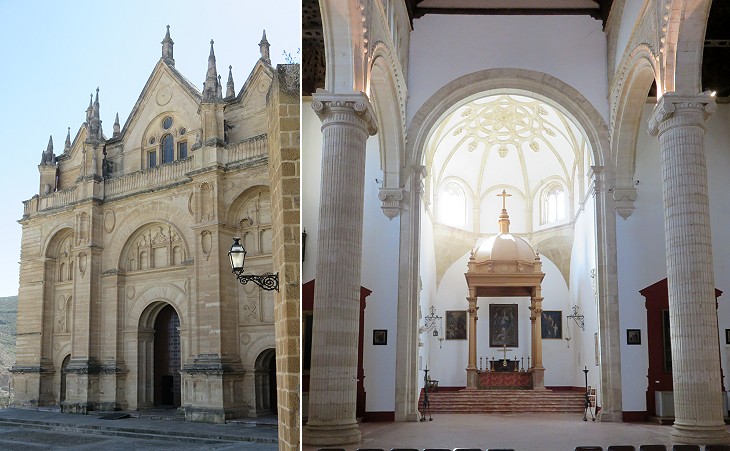 The town is clean and well built. The Colegiata, gutted by the invaders (the French in 1810), has been partially refitted. Ford
The church was built in 1514-1550 and it is one of the first examples of Renaissance style in Andalusia. Its plundering by the French makes more evident the neat design of the interior. The large size of the building indicates that Antequera enjoyed a period of prosperity in the XVIth century. 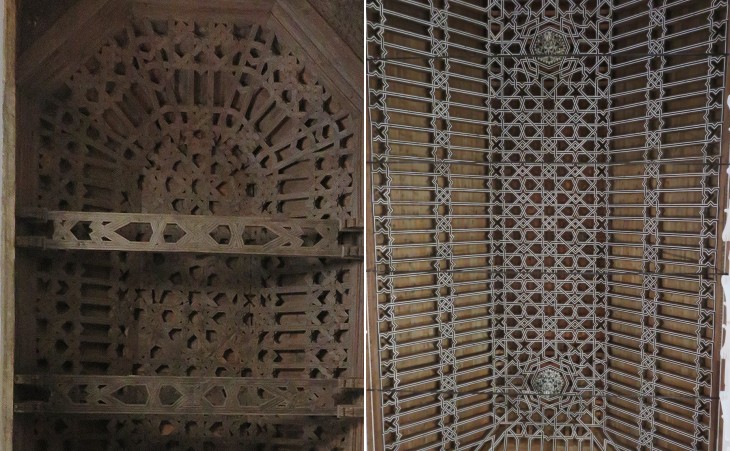 Antequera has many churches because of the presence of monasteries and nunneries. They were generally designed in the style which was in fashion at the time; the coffered wooden ceilings of Santa Maria la Mayor and El Carmen however were built with a technique known as artesonado which derives from models at Granada; such ceilings can be seen in many Christian buildings of Spain, e.g. in the Throne Hall of Aljaferia at Zaragoza. 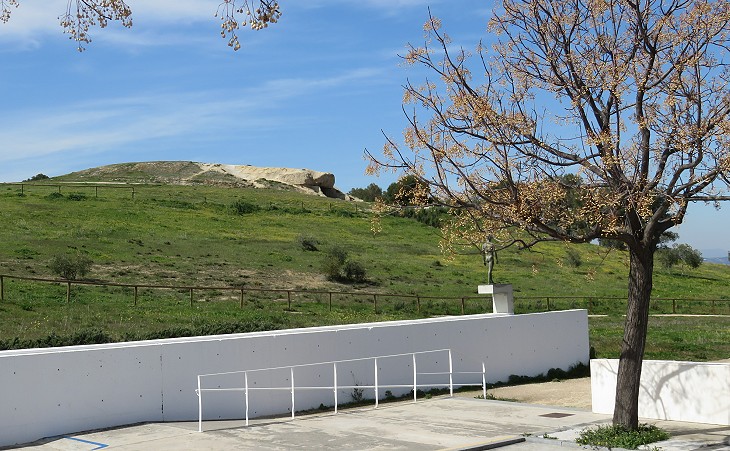 Just outside the town is la Cueva de Mengal, which looks E., and is some 70 ft. deep, it was only examined for the first time in 1842, by Rafael Mitjana, an architect of Malaga. He got the interior cleared out, by assuring the Antiqueran authorities, but not antiquarians, that treasures were buried there. It was long known by the shepherds and neglected; some consider it Celtic, others Druidical. Ford Antequera Dolmens Site - Located at the heart of Andalusia in southern Spain, the site comprises three megalithic monuments: the Menga and Viera dolmens and the Tholos of El Romeral, and two natural monuments: La Peña de los Enamorados and El Torcal mountainous formations, which are landmarks within the property. Built during the Neolithic and Bronze Age out of large stone blocks, these monuments form chambers with lintelled roofs or false cupolas. These three tombs, buried beneath their original earth tumuli, are one of the most remarkable architectural works of European prehistory and one of the most important examples of European Megalithism.
From the UNESCO World Heritage List Website 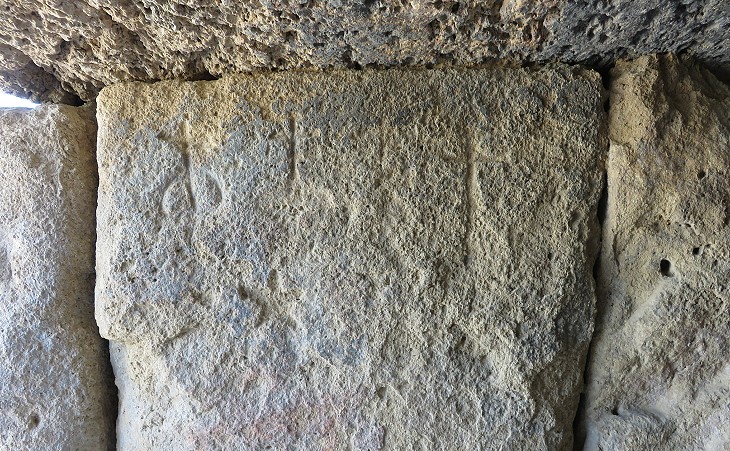 An interesting aspect of Dolmen de Menga is its orientation towards Peña de los Enamorados, which indicates that the mountain was regarded as a holy site. You may wish to see the megalithic tombs of Mycenae and the corbelled cryptoporticus of Tiryns which were built with techniques similar to those employed at Antequera.

Return to the introductory pages.