- The Royal Tombs of Mycenae
(Bronze coins minted during the reign of Emperor Antoninus Pius and showing two Labours of Hercules:
The Apples of the Hesperides (left) and The Cattle of Geryion (right).
The coins were found at Alexandria, Egypt and are now at the Numismatic Museum of Athens)

If you came to this page directly, you might wish to read a page with an explanation of the title of this section and a description of Mycenae first. 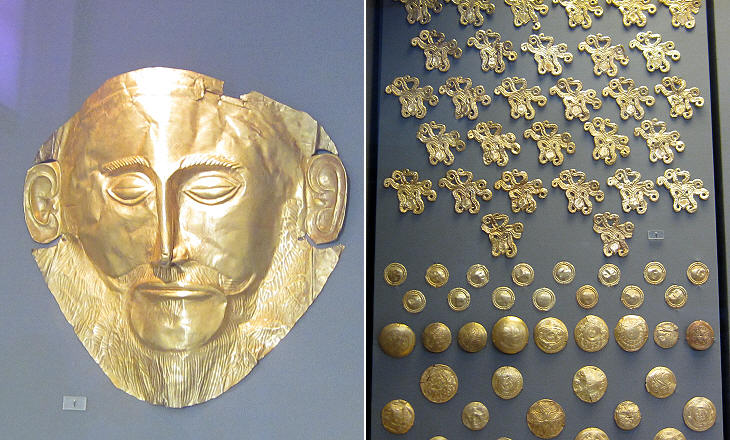 National Archaeological Museum of Athens: (left) Agamemnon's Mask (exhibit No 1 of the Mycenaean Room); (right) small gold jewellery which was embroidered on the dead's clothes

There were within the city of Mycenae the tombs of Agamemnon, and of his charioteer Eurymedon; also that of Teledamus and Pelops; with that of Electra. That of Clytaemnestra and Egisthus was without the walls, and at a little distance from them. Pausanias.
William Gell - An Itinerary of Greece With a Commentary on Pausanias and Strabo - 1810
With great joy I announce to Your Majesty that I have discovered the tombs which the tradition proclaimed by Pausanias indicates to be the graves of Agamemnon, Cassandra, Eurymedon and their companions, all slain at a banquet by Clytemnestra and her lover Aegisthos. (Telegram sent by Heinrich Schliemann to King George I of Greece in November 1876 after having discovered Agamemnon's Mask in Circle "A", a group of tombs inside the walls of Mycenae).
Heinrich Schliemann was a German businessman and amateur archaeologist who in 1873 associated the ruins of Hisarlik, a site on the Anatolian coast opposite Tenedos, with Homer's Troy and some jewels he found there with Helen of Sparta. In August 1876 he started excavating at Mycenae and he associated a gold mask he found there with another mythical personage i.e. Agamemnon, the king who led the Greeks in the Trojan War and whose dramatic return home was chanted by Aeschylus in The Oresteia.
The authenticity of this mask has been challenged, but other masks were found in the same site and they show the high level of refinement achieved by the Mycenaean civilization (one of them is shown in the image used as background for this page). 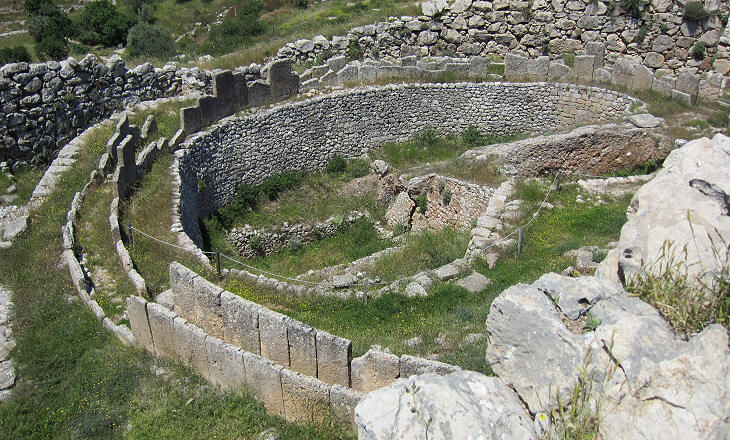 Schliemann excavated an area inside the walls of Mycenae, very near the Gate of the Lions; further archaeological work and more advanced dating techniques have ascertained that the graves were dug several centuries before the walls and that initially they were located outside the enclosure of Mycenae which was limited to the royal palace on the acropolis; nineteen bodies were found in six shaft graves; a circular double wall was built at a later time and it identified the site as a sacred one. A second circle of graves ("B" Circle) was identified in 1952-1955 outside the walls near the tomb of Clytaemnestra. 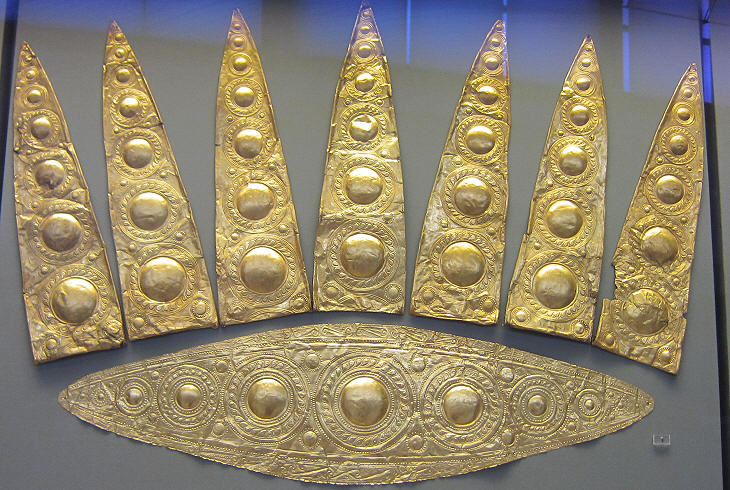 The association between the jewellery found at Mycenae and Agamemnon and his relatives made by Schliemann was unsubstantiated, yet the diadems, brooches and necklaces of Circle "A" have influenced the design of costumes in movies, dramas and ballets based on the tragic stories of Agamemnon, Clytaemnestra, Aegisthus and Orestes and on other events of Ancient Greece. 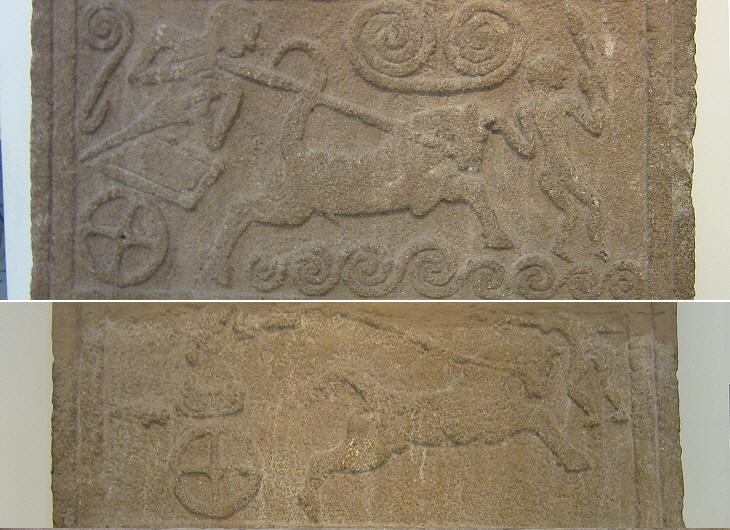 The reliefs found on several gravestones which depict scenes of hunting and fighting framed by decorative patterns are interesting for what they tell us about how horses were employed in warfare. They show that chariot warfare preceded cavalry, although one would think the contrary assuming that driving a chariot is more complex than riding a horse, especially in a mountainous country like Greece. Although the supposed time of the Trojan War has been set when Mycenae was already in ruins, these scenes recall Achilles on his chariot dragging the lifeless body of Hector (Iliad Bk. IX - see a sarcophagus in Lebanon). 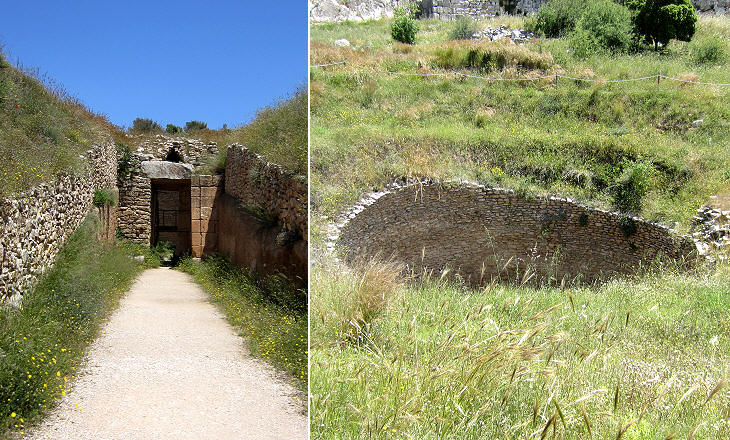 Tomb of Aegisthus (the naming of the tombs is unsubstantiated): (left) entrance; (right) its collapsed dome

(1804/1805) Among the ruins of Mycenae is a fountain named Perseia, and the subterraneous chambers of Atreus and his sons, in which treasuries their riches were deposited ; there is also the sepulchre of Atreus and of all those whom Egisthus slew at the supper with Agamemnon at his return from Troy. It is of little consequence whether these treasuries or magazines were erected by Atreus or his predecessors. Atreus was the greatest of the princes of the Peloponnesus, and the Atridae were proverbially rich, but the edifices might have been erected before his time. (..) On examining the descent of the hill to the left, another circular edifice may be discovered; but the roof has fallen in as far as the great stone above the gate, leaving a large circular hollow. Gell
The practice of burying the dead of the royal family in shaft graves was replaced in the XVth century BC by the use of beehive or tumulus tombs. The tomb named after Aegisthus, the lover of Clytaemnestra who became king of Mycenae after Agamemnon was killed by his wife, is the oldest one of a group which is located outside the walls and along the road to Argos.
Tumuli, mounds of earth and stones above a burial chamber, are perhaps the most common type of royal tomb throughout the ancient world: examples which can be seen in this website range from the tomb of the Macedonian Kings at Vergina to the Karakus Tumulus near Nemrut Dagi, from the Dolmen de Viera at Antequera to the Etruscan tombs of Cerveteri. 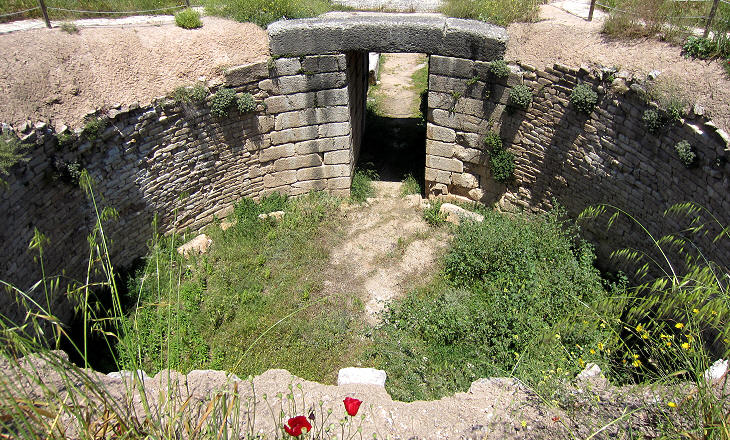 The most recently discovered tomb has not been named after a member of Agamemnon's family, but in the lack of a dedicatory inscription, Greek archaeologists have preferred to identify it by referring to the nearby gate. It is dated XIVth century BC and is the first one which was closed by a door. 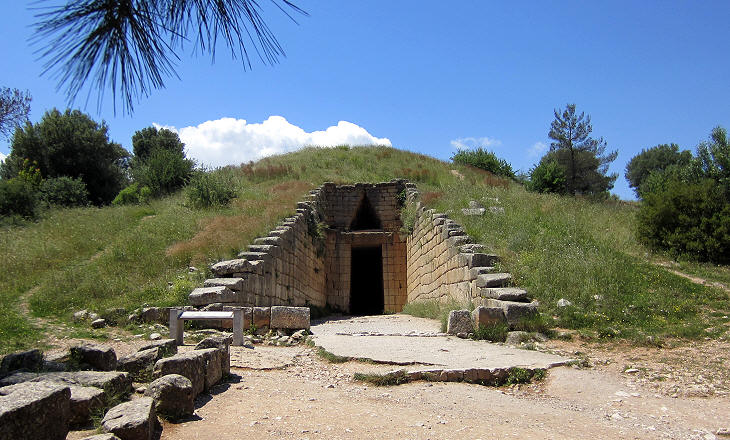 Treasury of Atreus aka Tomb of Agamemnon

The entrance of the treasury is a little lower down the hill. Two parallel walls 20 feet 6 inches asunder project from the portal, above which is a triangular opening, which is usual in the edifices of this city. The place was probably once closed by a sculptured stone. The front appears to have been cased with green and red marble, with spiral and circular ornaments. (..) In the architrave are holes into which bronze nails have been inserted to support some ornament. The portal is nearly 10 feet wide, and diminishes in breadth from the foundation upwards. It is about 20 feet high. (..) The passage to the chamber is 18 feet deep, It is covered with two stones, one of enormous magnitude, being 27 feet long, 16 broad, and about 4 thick. The apartment itself consists of a circular dome in shape like a bee-hive, 47 feet six inches in diameter, and about 50 in height. This dome is not composed of stones which form parts of the radii of a circle as in an arch, but is constructed with horizontal courses, the inside of each stone being curved in such a manner that the whole has the appearance of a regular vault. Though a stone is now wanting near the top, the roof seems to be in no danger of falling. (..) Pausanias mentions this edifice. Gell 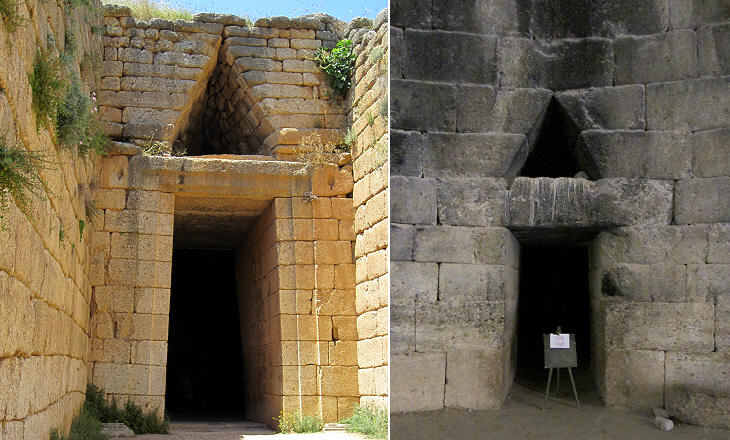 Treasury of Atreus: (left) entrance; (right) access to a second room where the treasury was housed

May 1806. Immediately to the south of the city is another monument; Gell (in his " Argolis") calls it the treasury of Atreus, and has given a most accurate drawing of it. Its having two chambers, certainly makes it more likely to have been a treasury than a tomb; and his theory is supported by Pausanias, who states that at Mycenae were shown the subterraneous chambers in which Atreus and his children concealed their treasures.
William Turner - Journal of a Tour in the Levant - 1820
The largest and best known tumulus tomb is named after Atreus, the father of Agamemnon and Menelaus, who became king of Mycenae with the help of Zeus. His name is associated with one of the most gruesome tales in Greek mythology. Having discovered that his brother Thyestes was the lover of his wife Aerope, Atreus killed three sons Thyestes had by one of the Naiads. He then invited his brother to return from exile and at a banquet offered him morsels of his sons' flesh; once Thyestes had eaten them, Atreus ordered the bodies of the three young men to be brought to the banquet hall to show him what he had in his belly; at this point Thyestes laid a curse on the seed of Atreus which proved effective.

When visiting this tomb it is impossible not to remember that blood calls for blood.
Clytaemnestra could not escape the curse Thyestes laid on the descendants of Atreus: her fate was to turn Orestes, the son she bore to Agamemnon, into a matricide. At the time Agamemnon was killed Orestes was a boy of ten; during the following seven years Orestes lived away from Mycenae among the shepherds of Arcadia. After having reached manhood he went to the Oracle of Delphi to inquire whether he should revenge his father's death; he was told he should do so, but also that he would be chased by the Erinyes for being a matricide (similar to other sagas of antiquity each episode announced a new development).
Orestes returned to Mycenae in disguise, killed Aegisthus and then he raised his sword on his mother; when he did so Clytaemnestra bared her breast in a desperate attempt to stop him, but Orestes beheaded her with a single stroke. You may wish to see the event in a relief of a Roman sarcophagus in Spain. 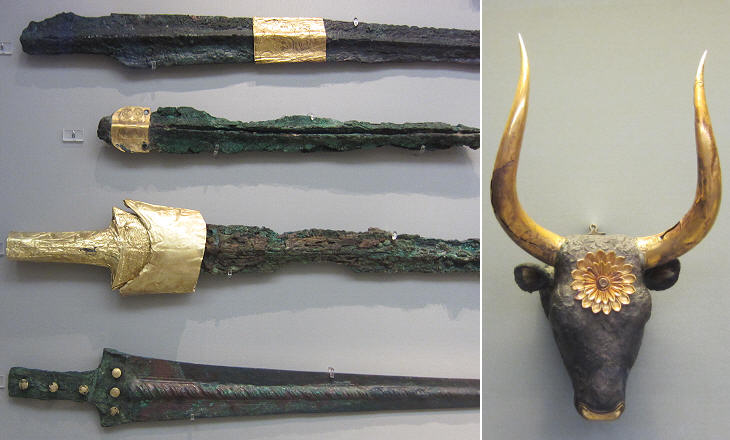 The dead were buried with attributes of their role such as ceremonial swords decorated with chiselled gold. The presence of a bull's head (actually a rhyton a vase for ceremonies) among the votive offerings placed in the graves is regarded by archaeologists as evidence of contacts between Mycenae and Crete where bulls were worshipped. The Seventh Labour of Hercules (the first one outside Peloponnese) was the capture of the Cretan Bull and it is interpreted as representing the conquest of Crete by the Greeks of the mainland; this political and military development is also narrated in the myth of Theseus and the Minotaur. 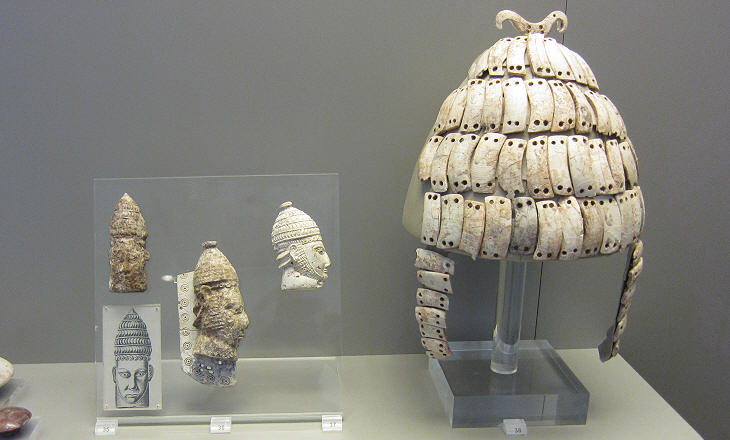 Ivory artefacts at the Mycenae Museum

Contacts with Egypt and Crete led Mycenaean artisans to become acquainted with ivory artefacts; the new material was regarded as being superior to other animal materials known until then (bone and antler) because it had a smooth lustre, it was durable and it could be easily carved. Elephant or boar tusks were used instead of gold to compose unusual crowns, see a similar crown in Crete. 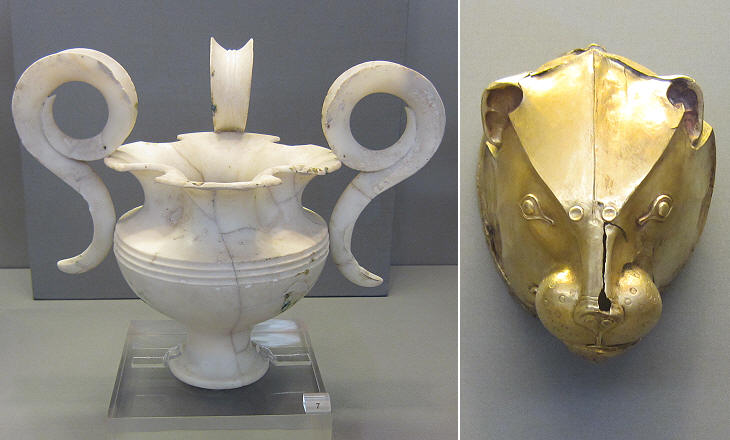 Alabaster was another material imported from Egypt and regarded as being very precious; alabaster was also used for decorative friezes in the tombs and in the royal palace.
Similar to the bull's head also the lion's head shown above was a ritual vase; they were thought to pass the animal's strength on to those who drank from them.
The amount of findings at Mycenae is simply extraordinary (some believe Schliemann faked some of them) and they reveal a level of refinement which is not equally evident in the ruins of the town.

Return to: page one - The Town
Other pages of this section: Tiryns; Ancient Argos