The Latin word monstrum meant a supernatural event or being and it derived from monere (to warn) and monstrare (to show). The word was used by Latin writers to indicate something which caused feelings of wonder and repulsion at the same time: 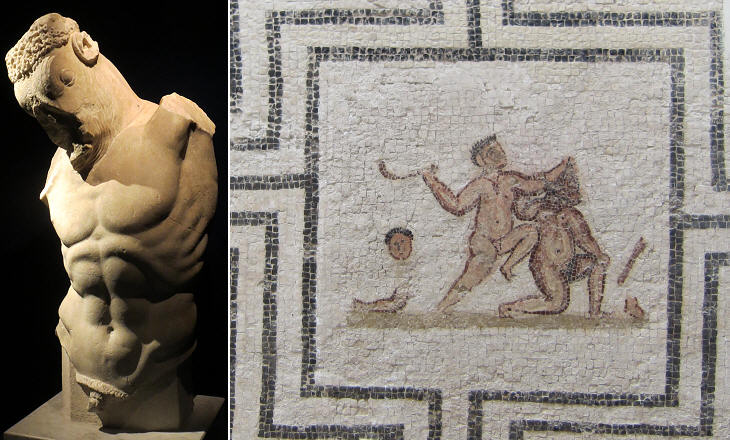 (left) Statue at Museo Nazionale Romano (Ist century AD); (right) detail of a mosaic found at Thuburbo Maius (Tunisia) showing the Labyrinth and the killing of the Minotaur by Theseus

Minos, king of Crete married Pasiphae, but Poseidon made her fall in love with a white bull. She confided her unnatural passion to Daedalus, the famous Athenian craftsman who promised to help her, and built a hollow wooden cow where Pasiphae slipped inside. Soon the white bull ambled up and mounted the cow, so that Pasiphae had all her desire, and later give birth to the Minotaur, a monster with a bull's head and a human body. Minos asked Daedalus to build a maze called the Labyrinth at the very heart of which he concealed Pasiphae and the Minotaur. Minos ordered the Athenians to send seven youths and seven maidens every ninth year to the Labyrinth, where the Minotaur waited to devour them. On the third sacrifice Theseus entered the Labyrinth and killed the Minotaur.
Abridged account from Robert Graves - The Greek Myths - Penguin Books - 1955
The origin of the Minotaur's myth is basically split into two parts: the birth of a man with a bull's head is linked to very ancient ceremonies during which a king, wearing a bull's mask, married a moon-priestess wearing cow's horns. The killing of the Minotaur by Theseus is a metaphor for the end of the supremacy of Crete over mainland Greece. 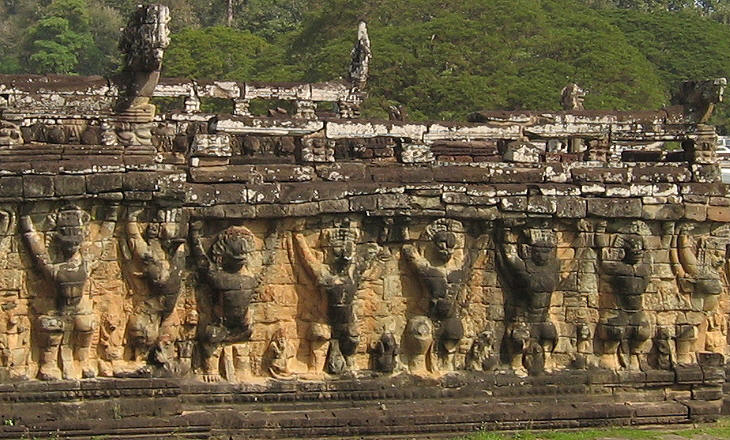 The Minotaur is a rare example of a monster having a human body with the face of an animal, because in Mediterranean civilizations monsters were more usually the combination of human faces with animal bodies. Garuda is a creature of both Hindu and Buddhist myths. It is usually portrayed as a bird, but in Cambodia it was portrayed as a human being with an eagle's beak. 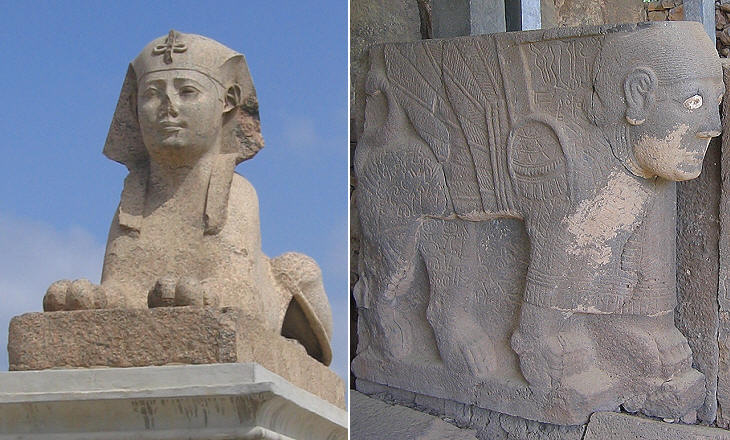 In ancient civilizations the lion was associated with strength and royalty. It had positive connotations and statues of lions were placed at the sides of gates to protect them as at Hattusa and Mycenae. Egyptian sphinxes derive from the guardian role of the lion with the addition of a human male face, probably that of a pharaoh. In other ancient civilizations sphinxes had a female face and wings were added to their bodies. 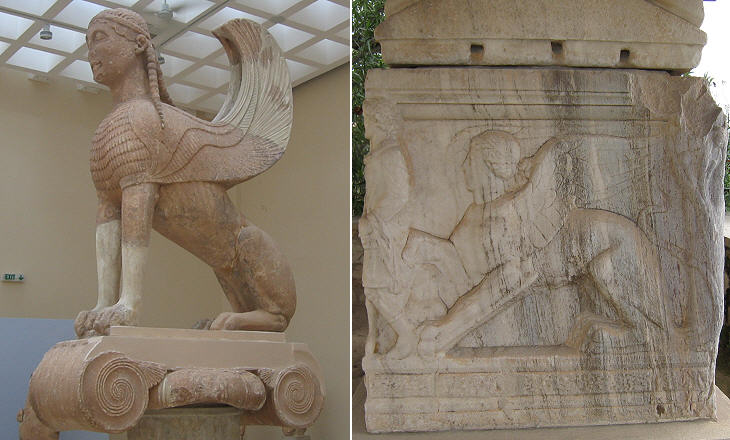 (left) VIth century BC Naxian Sphinx at Delphi; (right) sphinx on the side of a Roman period sarcophagus at Eleusi

In one instance the sphinx had a negative connotation in the Greek myth, but otherwise the way it was portrayed indicates a positive view of the monster. In this negative episode the sphinx was depicted as a cruel creature sent to Thebes by Juno to punish its inhabitants. This sphinx posed a riddle to wayfarers and killed those who were unable to solve it. It disappeared after Oedipus gave the right answer. You may wish to see a painting portraying the episode at Sabratha (Libya). 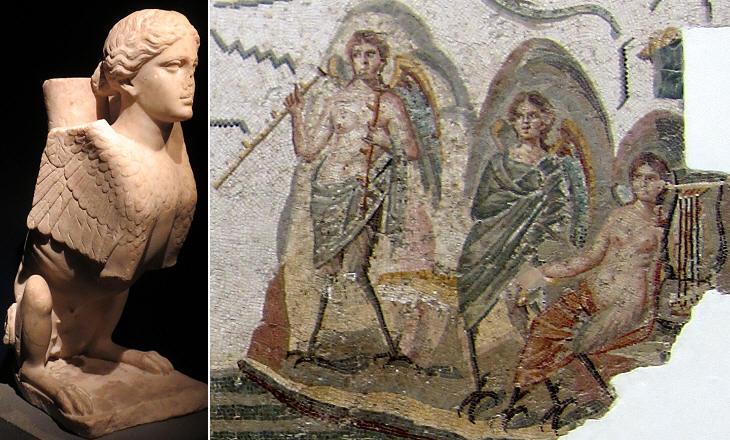 (left) Statue of a Harpy at the Exhibition (IVth century BC); (right) the Sirens in a mosaic found at the House of Ulysses at Thugga (Tunisia)

'Come here,' they sang, 'renowned Ulysses, honour to the Achaean name, and listen to our voices. No one ever sailed past us without staying to hear the enchanting sweetness of our song and he who listens will go on his way not only charmed, but wiser.'
Homer - Odyssey - Book XII - translation by Samuel Butler.
According to one of the many myths surrounding the Sirens who vainly tried to charm Ulysses, Aphrodite turned three young girls into birds because they would not yield their maidenheads either to gods or men. They could not fly because the Muses pulled out some of their feathers. The Harpies instead could fly and actually they had the task of snatching up criminals for punishment by the Erinnyes (furies who avenged crimes of parricide and perjury) and lived in a Cretan cave. 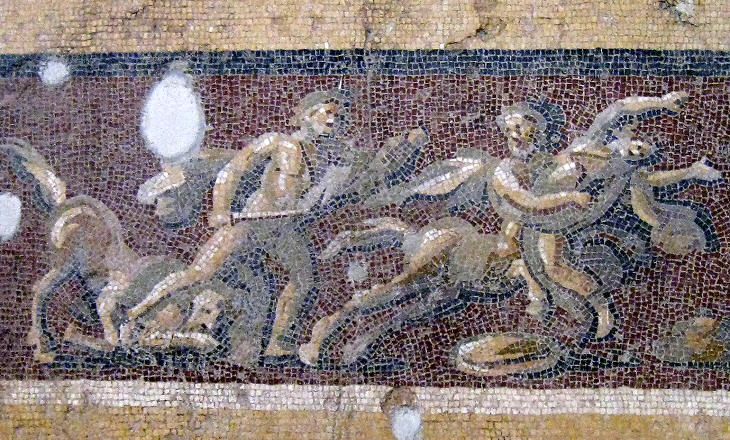 Mosaic found at a Roman villa near Antioch

The Centaurs, half-human and half-horse, were most likely a symbol for uncivilized tribes living on the mountains to the north of Greece. The most celebrated anecdote regarding them is related to their drunkenness at a wedding to which they were invited with the Olympian gods. The episode was depicted on the gable of the Temple to Zeus at Olympia and in many other statues and reliefs as well as in paintings and mosaics. 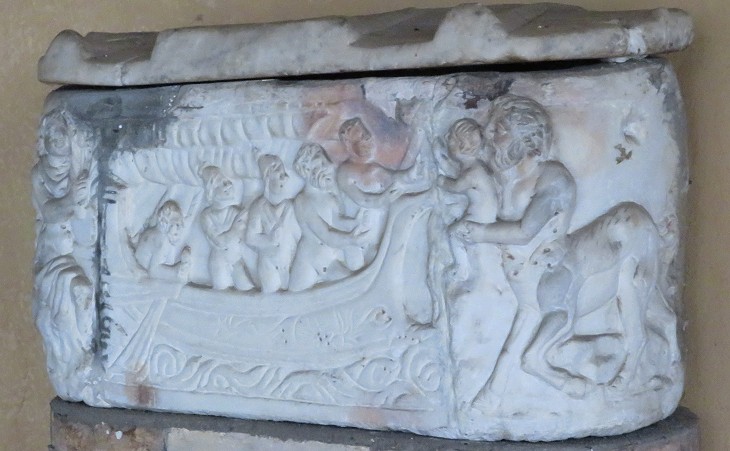 Small sarcophagus in the cloister of S. Paolo fuori le Mura: (right to left) Chiron holds infant Achilles in his arms to show him to his father Peleus; the latter is sailing towards Colchis (the land of the Golden Fleece) together with Hercules and other Argonauts

On that day all the gods looked down from heaven upon the ship and the might of the heroes, half-divine, the bravest of men then sailing the sea (..) And there came down from the mountain-top to the sea Chiron, son of Philyra, and where the white surf broke he dipped his feet, and, often waving with his broad hand, cried out to them at their departure, "Good speed and a sorrowless home-return!" And with him his wife, bearing Peleus' son Achilles on her arm, showed the child to his dear father.
Apollonius Rhodius - Argonautica - Book I - translated by R. C. Seaton
Notwithstanding the bad image of the Centaurs the education of Achilles and other heroes was entrusted to Chiron, a Centaur who was expert in many fields. He was wounded by Hercules by accident and turned into a constellation. 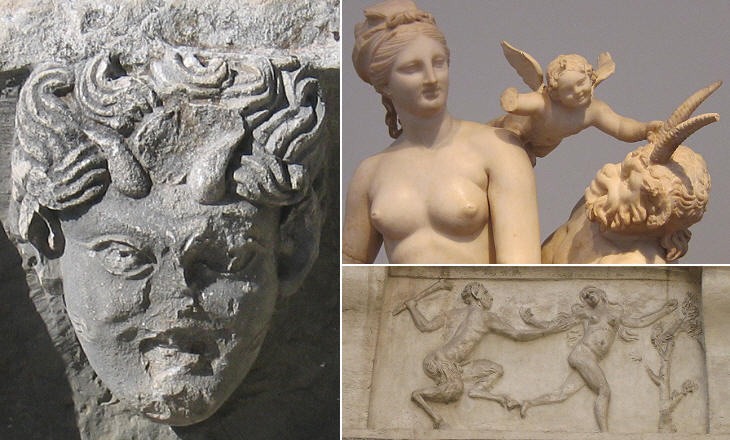 (left) Satyr at the theatre of Myra (Turkey); (right-above) detail of a statue of Aphrodite and Pan found at Delos; (right-below) Renaissance frieze at Palazzo Spada

Satyrs, half-human and half-goat, were similar to Centaurs in nature as they were usually drunken and lecherous. They accompanied Dionysus in processions which are portrayed in mosaics and reliefs (see one at Lyon). According to Ovid, Pan, a god having the aspect of a satyr, boasted he had coupled with all the Maenads, female followers of Dionysus, and he even attempted to do it with Aphrodite. He was dedicated shrines which had the appearance of caves as at Thassos and at Caesarea Philippi. 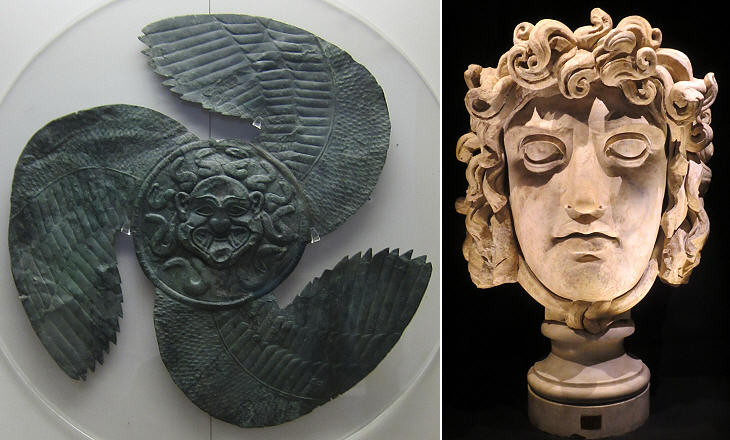 Their name derives from Ancient Greek gorgos, dreadful. They were three sisters, one of whom, Medusa, was mortal and was beheaded by Perseus. They had wings, glaring eyes and serpent locks and their gaze turned men into stone. Because of this feature they were regarded as the guardians of sites. At Petra they protected a tomb, at Didyma the Temple to Apollo, at Leptis Magna the Forum. Cellini, Caravaggio and Algardi are some of the XVIth/XVIIth centuries artists who designed impressive heads of Medusa (it opens in a separate window). 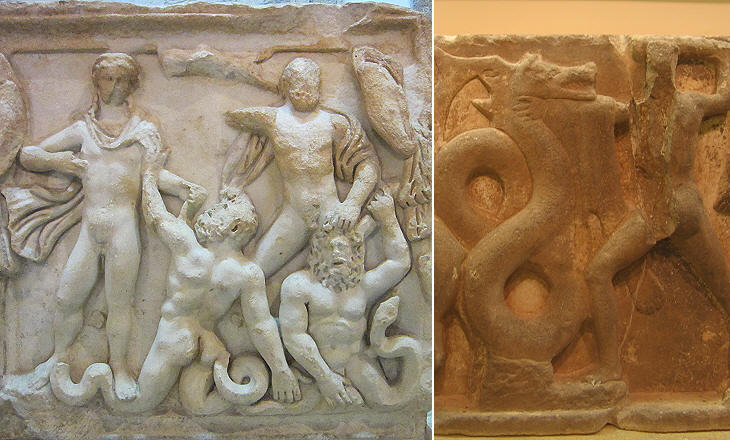 Hercules had to deal with monsters in many of his labours. The features of the monsters were designed to enhance the strength and skill of the hero. He had to fight Hydra, a snake-like monster with many heads, Cerberus, a three-headed dog and Triton, a gigantic merman. 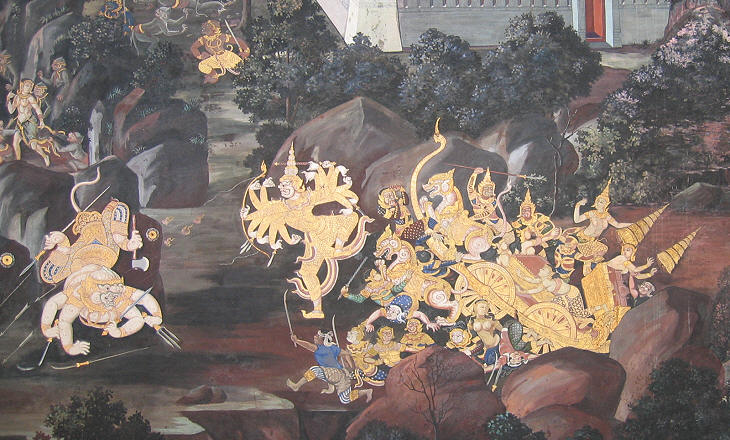 Detail of the decoration of the Grand Palace at Bangkok

Monsters with a high number of heads, arms, legs or eyes are frequent in Eastern civilizations. They may hold a very significant religious role, whereas in the Greek myth the twelve Olympian gods did not have any abnormal features. 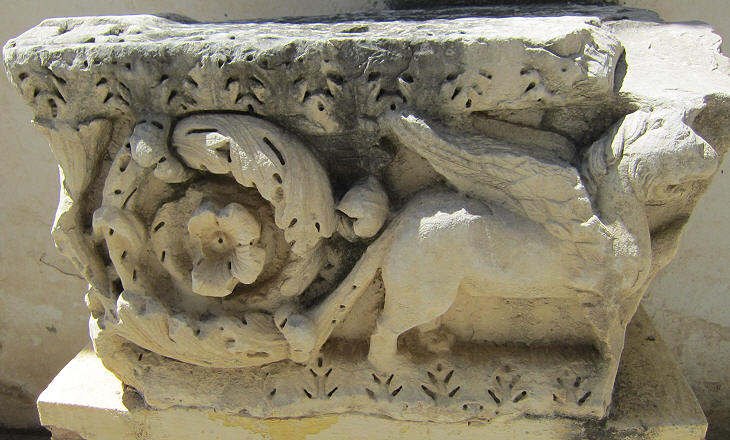 Capital with Pegasus at Mactaris (Tunisia). It was the symbol of Legio III Augusta, the Roman Legion which was stationed in Africa

Pegasus, the winged horse, sprang from the dead body of Medusa, to the great surprise of Perseus. It was fathered by Poseidon, whom for the Greeks was the god of horses as wells as of sea. It lived on Mount Helicon with the Muses (see a mosaic at Neapolis in Tunisia). It helped Perseus saving Andromeda and Bellerophon killing Chimera. See fountains of Pegasus at Villa d'Este and Villa di Bagnaia. Archaeological Museum of Florence: Chimera of Arezzo, an Etruscan Vth century BC bronze statue restored in 1784 by adding the tail (you may wish to see it in a mosaic in the Imperial Palace at Constantinople)

Chimera was a fire-breathing monster which terrorized the inhabitants of Lycia. Bellerophon was charged by King Iobates with the task of killing the monster. He overcame Chimera by flying above it on Pegasus' back, riddling it with arrows, and then thrusting between its jaws a lump of lead which he had fixed to the point of his spear. Chimera's fiery breath melted the lead, which trickled down its throat, searing its vital organs (see a mosaic from Girona). 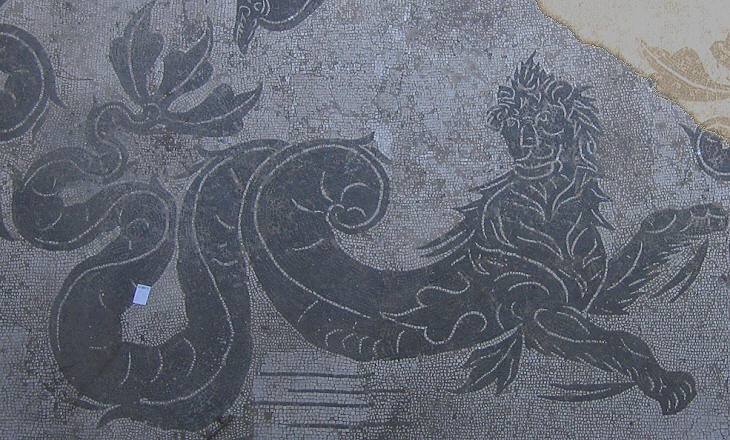 In Late Antiquity mosaics depicting sea creatures became very popular and they often included monsters without a proper pedigree.
The image used as background for this page shows a relief portraying a Harpy at the Exhibition.