All images © by Roberto Piperno, owner of the domain. . Write to romapip@quipo.it.

- The Oracle of Apollo at Didyma
(theatrical masks at Myra)

At ten we had passed a healthy vale by the sea, and then crossing a high ridge, had in view some columns of the temple, which are yet standing. (..) Before us was a small inlet or gulf on the north-side of the promontory Posidium, on which the temple is situated. (..) The temple of Apollo was eighteen or twenty stadia, or about two miles and a half from the shore; and one hundred and eighty or twenty two miles and a half from Miletus. (..)
Richard Chandler - An account of a tour made at the expense of the Society of dilettanti - 1775
From the Temple to Apollo in Miletus a Holy Road reached a gigantic shrine dedicated to the same god and located some twenty miles south of the town. The final section of the road can be seen just before reaching the archaeological area. The road was paved by Emperor Trajan.

Overall view of the shrine

The memory of the pleasure, which this spot afforded me, will not be soon or easily erased. The columns yet entire are so exquisitely fine, the marble mass so vast and noble, that it is impossible perhaps to conceive greater beauty and majesty of ruin. Chandler
A large temple was built in the VIth century BC, but it was destroyed by the Persians to punish the inhabitants of Miletus for their rebellion. Alexander the Great promoted its reconstruction and the new temple was designed to be one of the largest of the Greek World. Because of its size archaeologists speak of a Greek Karnak with reference to that gigantic Egyptian place of worship.
The construction of the temple lasted for centuries and actually its decoration was never entirely completed.
The site is called Didyma, which in Greek means twin; recent excavations along the last section of the Holy Road have identified evidence of a (smaller) temple dedicated to Artemis, the twin sister of Apollo.

Columns of the porch and passage leading to the "adyton"

In the porch the faithful met with the priests in charge of referring their queries to the sibyl; the priests then disappeared into two long corridors which led to the adyton, a space where the general public could not enter (adyton = do not enter).

Courtyard of the "adyton"

Religions try to meet some basic expectations felt by mankind: the desire to know about the origin of the world, the need for ethical values, the hope for some sort of immortality, the wish to influence events. Greeks and Romans alike did not bother very much about cosmogony and afterlife; the focus of the Greek/Roman religion was on trying to influence events by knowing in advance whether a given action would succeed or fail. Another aspect of their beliefs was a long list of actions/things which brought bad luck and thus should be avoided.
This explains why there were so many oracles (from Latin orare to speak) in the Ancient World. Similar to Delphi the adyton was located at a lower level, but unlike Delphi, at Didyma the cell containing the statue of the god was placed in a large courtyard.

Water played a major role at Didyma (and in other ancient shrines, e.g. at the Asklepion of Pergamum). The faithful did their ablutions (ceremonial acts of washing parts of the body) at a well at the foot of the temple, while the sibyl made use of another well in the adyton.

The adyton had an elaborate decoration mainly based on griffins, mythical creatures with the head and the wings of an eagle and the body of a lion. They were sacred to Apollo and were in charge of guarding his gold in Scythia (southern Russia). Some monuments of Rome were decorated with a similar frieze, e.g. Foro di Traiano and Tempio di Antonino e Faustina.

At evening a large flock of goats, returning to the fold, their bells tinkling, spread over the heap, climbing to browse on the shrubs and trees growing between the huge stones. The whole mass was illuminated by the evening sun with a variety of rich tints, and cast a very strong shade. Chandler
The three standing columns are not the result of a modern reconstruction: they have been standing for more than 2,000 years. In the region, columns of similar size can be seen only at the Artemision of Sardis.

Outer decoration of the temple; the image used as background shows another detail of the decoration

The outer decoration of the temple is mainly based on heads of Gorgons. In the Greek myth Gorgons were three sisters (Medusa, Stheno and Euryale) with snakes for hair; they had the power to turn anyone who looked at them to stone. Medusa was beheaded by Perseus. Gorgons were also regarded as patrons of secrecy and the whole process of querying the sibyl and reporting/interpreting her utterances was to be kept secret. In addition a Gorgon's face (Gorgoneion) was regarded as a charm against ills. 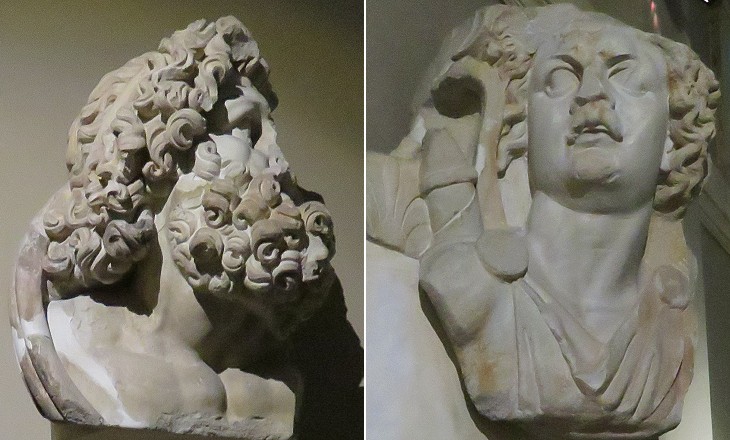 Emperor Theodosius in his efforts to eradicate the ancient beliefs turned the god's cell into a church; subsequently the oracle was abandoned.

Near the archaeological area there is a large mosque: a relief shows that at one point it was a church (one can see a partially erased cross and the inscription is written in Greek).