All doctors know that the Greek island of Kos was the birthplace of Hippocrates, the physician regarded as the "Father of Medicine" and whose oath first dealt with the ethics of medical practice. 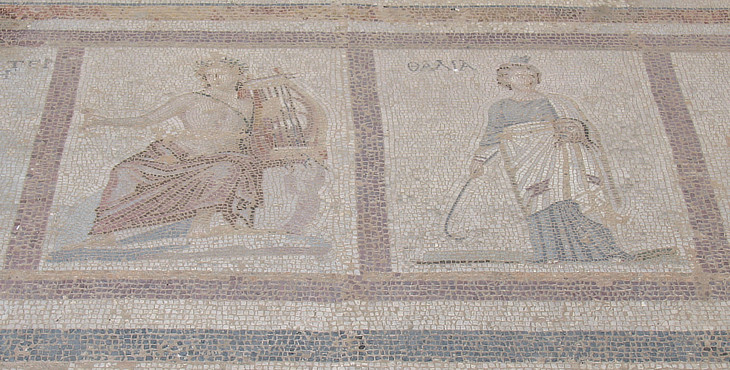 (left) Apollo Citharedus (playing the cittern): Roman mosaic in Kos; (right) a plane (sycamore) in Kos under which Hippocrates is said to have worked: it now surrounds an Ottoman fountain built making use of ancient columns: it is located very near the fortress of the Knights

Asclepius was the Greek God of Medicine: Apollo, his father, was thought to have healing powers too. Coronis, Asclepius' mother, was unfaithful to Apollo by admitting young Ischis to her couch, though already with child by Apollo; the god divined Coronis' infidelity and turned the snow-white feathers of the crow he had asked to guard Coronis black. Artemis, Apollo's sister, killed Coronis with her arrows, but Apollo sent Hermes to cut the still living child from her womb. Asclepius learned the art of healing from both Apollo and the Centaur Cheiron.
Medicine was practised in an Asclepeion, a location dedicated to Asclepius (Aesculapius in Latin).

The Asclepeion of Kos is located three miles from the ancient town and can be easily reached by city bus. Walking there is however a better approach to the site: first because one sees the refreshing sight of how centuries of hate and confrontation may come to an end and secondly because a long cypress alley designed during the Italian occupation of the island (1912-43), provides an appropriate introduction to the holy place. The alley reminds the viewer of a similar one in Villa Adriana. Buses follow another route and reach another entrance to the archaeological site. 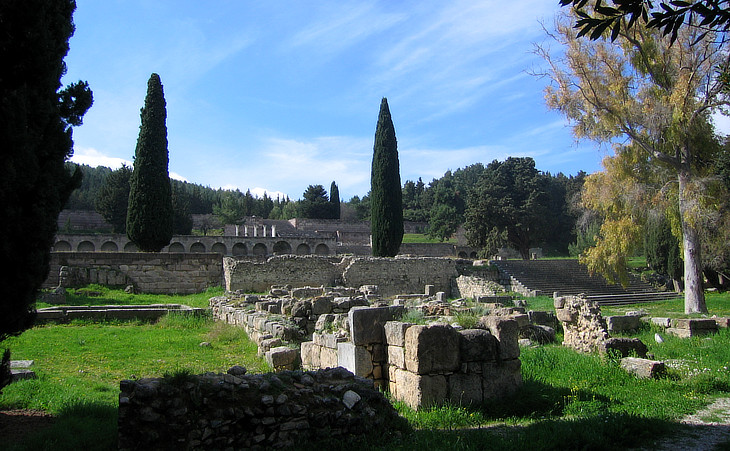 Views of the terraces

In the very first days of the Greek civilization the gods were thought to live inside the trees. According to Pliny the Elder (Historia naturalis: Book XII):
Haec fuere numinum templa, priscoque ritu simplicia rura etiam nunc deo praecellentem arborem dicant; nec magis auro fulgentia atque ebore simulacra quam lucos et in iis silentia ipsa adoramus; arborum genera numinibus suis dicata perpetuo servantur, ut Iovi aesculus, Apollini laurus, Minervae olea, Veneri myrtus, Herculi populus; quin et Silvanos Faunosque et dearum genera silvis ac sua numina tamquam e caelo attributa credimus.
"The trees formed the first temples of the gods, and even at the present day, the country people, preserving in all their simplicity their ancient rites, consecrate the finest among their trees to some divinity; indeed, we feel ourselves inspired to adoration, not less by the sacred groves and their very stillness, than by the statues of the gods, resplendent as they are with gold and ivory. Each kind of tree remains immutably consecrated to its own peculiar divinity, the beech to Jupiter, the laurel to Apollo, the olive to Minerva, the myrtle to Venus, and the poplar to Hercules: besides which, it is our belief that the Sylvans, the Fauns, and various kinds of goddess Nymphs, have the tutelage of the woods, and we look upon those deities as especially appointed to preside over them by the will of heaven" (translation by John Bostock anf H.T. Riley).

At the very beginning the Asclepeion was just a clearance in a sacred wood and even after the construction of terraces and temples the surrounding wood remained an essential part of the holy site (the early days of Rome were associated with a sacred wood too). 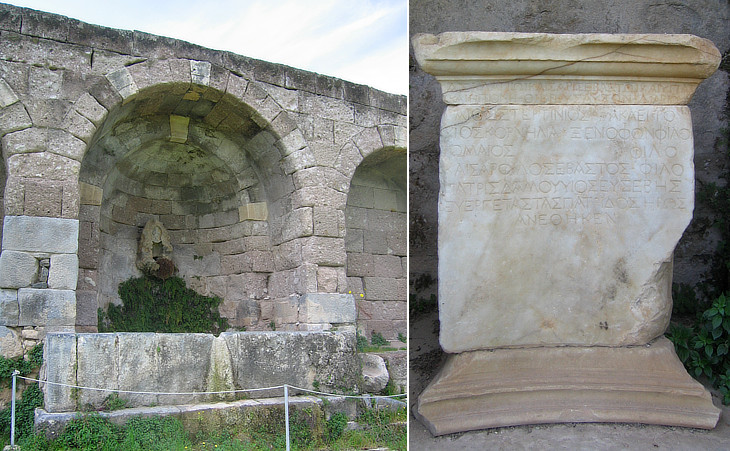 (left) Ruins of the Roman Baths in the lower terrace; temples and altar to Asclepius in the middle terrace; (right) site of the statue to Emperor Nero

Hippocrates was not the only Kos doctor to be highly regarded. In AD 54 Emperor Claudius granted immunity from taxation to Kos: according to Tacitus (Book XII): the emperor proposed to grant immunity from taxation to the people of Cos, and he dwelt much on their antiquity. "The Argives or Coeus, the father of Latona, were the earliest inhabitants of the island; soon afterwards, by the arrival of Aesculapius, the art of the physician was introduced and was practised with much fame by his descendants." Claudius named them one by one, with the periods in which they had respectively flourished. He said too that Xenophon, of whose medical skill he availed himself, was one of the same family, and that they ought to grant his request and let the people of Cos dwell free from all tribute in their sacred island, as a place devoted to the sole service of their god (translation by Alfred John Church and William Jackson Brodribb).
The Koans dedicated more statues to Claudius than to any other emperor.
According to Pliny the Elder (Historia Naturalis - Book XXIX) (Gaius Stertinius Xenophon) inputavit principibus, quod sestertiis quingenis annuis contentus esset, sescena enim sibi quaestu urbis fuisse enumeratis domibus ostendebat. Par et fratri eius merces a Claudio Caesare infusa est, censusque, quamquam exhausti operibus Neapoli exornata heredi HS CCC reliquere. "As for Gaius Stertinius Xenophon, he thought that he conferred an obligation upon the emperors in being content with five hundred thousand sesterces per annum; and indeed he proved, by an enumeration of the several houses, that a city practice would bring him in a yearly income of not less than six hundred thousand sesterces. Fully equal to this was the sum lavished upon his brother by Claudius Caesar; and the two brothers, although they had drawn largely upon their fortunes in beautifying the public buildings at Neapolis, left to their heirs no less than thirty millions of sesterces! (translation by John Bostock anf H.T. Riley)."

Middle terrace: (left) old temple to Asclepius; (right) temple built during the Roman rule (its cornice was decorated with lion's heads which served as spouts: one of them is shown in the image used as background for this page)

Notwithstanding the gratitude Stertinius Xenophon owed Emperor Claudius, he betrayed his patient. According to Tacitus, Agrippina, Claudius' wife, gave the emperor a dish of poisonous mushrooms, and when they merely made him ill she summoned Stertinius Xenophon, who, by pretending to help the emperor's efforts to vomit, actually put a poison-tipped feather down his throat. Some find a confirmation of the physician's behaviour in the fact that he erected in the Asclepeion of Kos a statue to Emperor Nero, Agrippina's son.

View of Asclepius' temple on the upper terrace: in the distance the Asian coast

The Asclepeion of Kos was developed in steps: initially it was just made up of a series of steps leading to an altar; then a temple to Asclepius was built on the right side of the altar (during the Roman rule a temple was added on the left side of the altar). Later on a larger temple to Asclepius was erected on a higher terrace, from which one enjoys great views over the town of Kos and the nearby shores of Asia.

Larger Temple to Asclepius: use of black stones

The lowest of the three steps leading to the larger temple was black and the entrance to the god's cell was also black; most likely this choice had some spiritual meaning.
Since the baths in the lower terrace belong to the IVth century, we know that the Asclepeion was still flourishing during that time period. The site is thought to have been abandoned in the VIth century as a result of earthquakes and of the general decline of the economy. In addition the Asclepeion was regarded as a symbol of the old religion which Emperor Justinian was determined to eradicate. Eventually a small chapel was built on the ruins of the temple: its site is marked by a slab placed on a capital.