- Archangelos - Kremasti - Andimahia
(relief in the fortress of Bodrum)

The Knights did not fortify only the main towns of each island, but with the objective of ensuring no enemy could approach their possessions without them knowing it, they built several other fortresses or castles at key points of the Dodecanese.

At last we ascended to an upland plain, the whole of which was under cultivation, and on one side of it lay the large village of Archangelos. (..) Here we obtained a lodging for the night in the house of a peasant woman. (..) The hill above the village is crowned by a fort built by the Knights; but it is of no great strength or size, and the interior is much ruined: on the side towards the entrance an escutcheon has been let into the wall.
Henry Fanshawe Tozer - The islands of the Aegean Sea. Publ. 1890, but Tozer began his travels in 1874.
Archangelos is a farming village midway between Rhodes and Lindos: it is located at some distance from the sea at the foot of a hill. 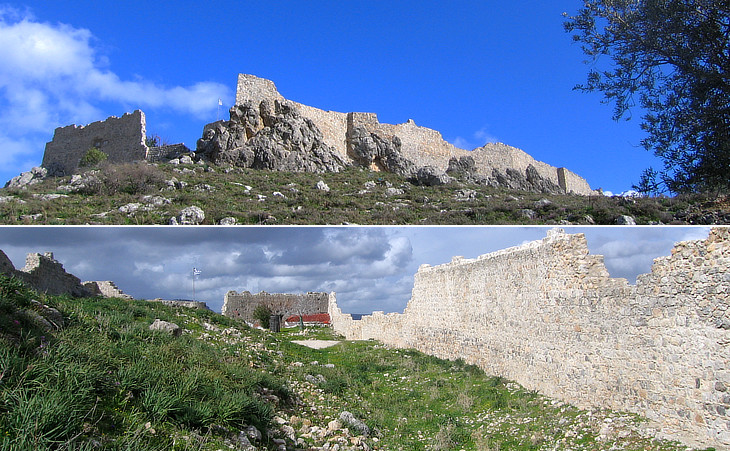 The Knights built at the top of the hill a small fortress: its shape is not regular because it follows that of the underlying rock. The purpose of the fortification was to give protection to the peasants in case of pirates' raids. In addition the sea is visible from the top of the hill so that the arrival of an enemy fleet would have been detected earlier than from Rhodes.

Archangelos was part of a system of fortifications built after 1453 to react to the Ottoman threat. The Knights built also another fortress on the eastern coast at Feraklio between Archangelos and Lindos.

The beach of Kremasti on the western side of the island, opposite the Asian coast, is a very busy one: the old village located one mile from the sea was one of the first conquests of the Knights.

(left) What is left of the tower; (right) view towards the Asian coast

In the neighbouring village of Cremaste there is a ruined castle of this period; and its church is dedicated to the Panagia Katholike. Tozer
The tower at the centre of the old village has not been regarded as being worth some protection; it is now used as temporary shelter by immigrants who cannot afford a better accommodation.
Other fortifications were built by the Knights on the western coast at Kamiros and Monolithos.
We went to a place on the shore marked Kamera in the Admiralty Chart. Here is a ruined modern village. Below, on the shore, was a square tower, which I did not examine. (..) At a quarter of an hour from the village of Monolithos is a castle of the Knights, perched on the top of an isolated rock overlooking the sea. The name of the village, is derived from this rock. The situation of this fortress and its name reminded me of the village in Mytilene called Petra, from being perched in like manner on the top of a rock. The walls of this castle are roughly built. (..) The arms of the Grand Master D'Aubusson appear among the decorations.
Charles Thomas Newton - Travels and Discoveries in the Levant - 1865

The fortress of Andimahia is located on a hill on the southern coast of Kos, opposite the island of Nissiros.

The fortress is very large and it is clearly visible from the ferry linking Nissiros with Kos. It was strengthened with a round bastion, an indication that the Knights regarded it as very important in their defence system. 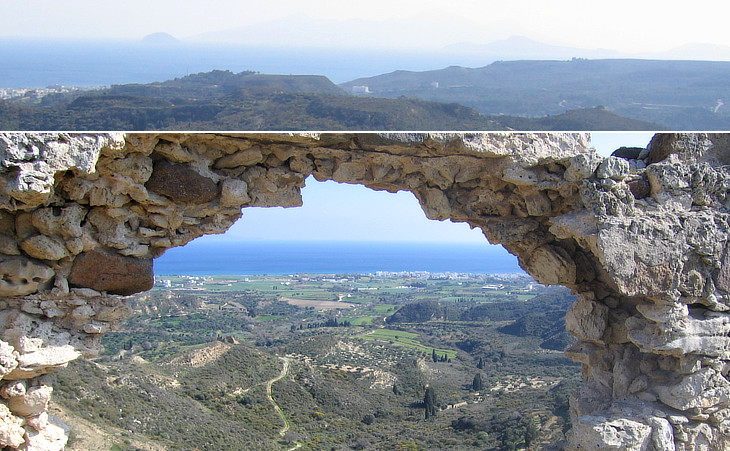 From Antimachia we went to Kephalas. Between these two points the great mountain-ridge of Cos is interrupted, as if by some natural convulsion. Just opposite this isthmus lies Nisyros, which seems as if it had been plucked up by the roots, and flung out of the mountain-chain into the sea, its formation so completely corresponds with the general character of the mountain-ridge of Cos. Hence the ancients, who never lost an opportunity of turning a physical phenomenon into myth, said, or rather sang, that Nisyros was broken off from Cos by Neptune. Newton In 1494 Grand Master (and Cardinal) Pierre d'Aubusson promoted an overall strengthening of the fortress. You can see his coat of arms in the image used as background for this page. 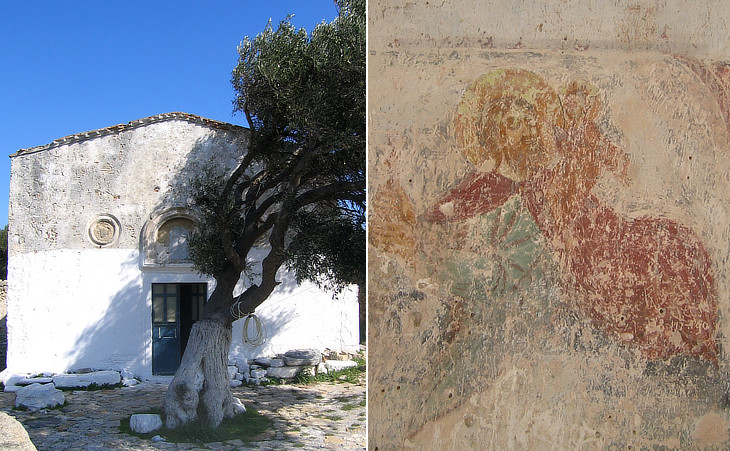