- Symi
(relief in the fortress of Bodrum)

Symi is a small island six miles off the Asian coast: it is very arid: in the past (similar to Castelrosso) its importance was due to a very well repaired natural harbour on its eastern coast. 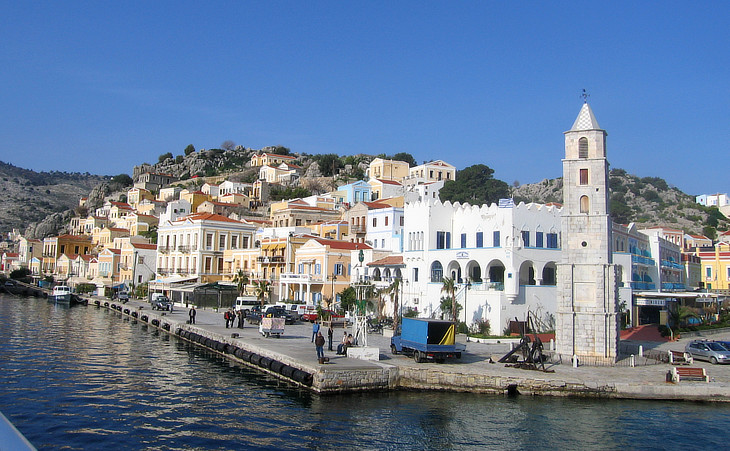 December 2nd. 1815 - Immediately on anchoring we went ashore to the Scala, which contains a few houses and magazines, and luckily found a coffee-house open with a good blazing fire, by which we sat till day-break. I was then delighted by the scenery that surrounded me. The port is a deep and capacious oval, bordered by high rocks that shelter it completely on every side.
William Turner - Journal of a Tour in the Levant - 1820 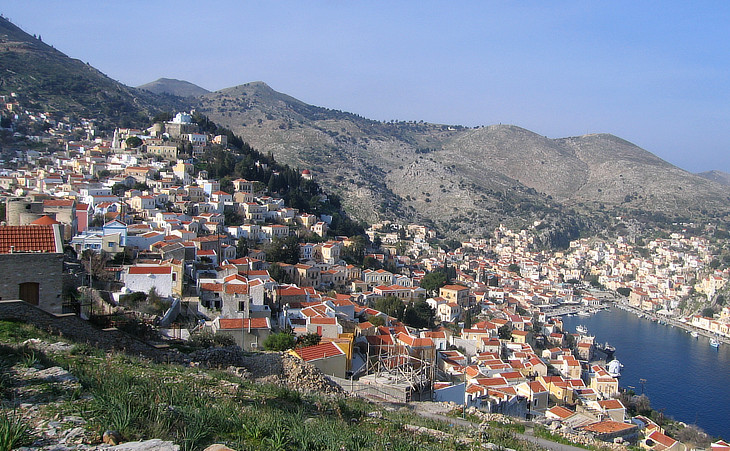 Overall view of the town and the harbour

Near the top of one of these, above the Scala, is the town, to which I ascended soon after sun-rise, by a steep rocky path, at least a toile long. The town is to the north of the island. (..) With respect to antiquity, Symi can boast of the remotest. Homer, in his catalogue, records that Nereus conducted three ships from this island to the Trojan war, and that next to Achilles, he was the handsomest of the Greeks. (..) I went first to the Aga to inquire for the English Consul: he is the only Turk resident in the island, and is appointed by the Bey of Rhodes. (..) The English Consul it was no easy matter to find. (..) He was a Symiote who could speak nothing but Greek. (..) He bad me heartily welcome to his house, in which I was very glad to take up my quarters. (..) The island, consisting almost exclusively of mountains of rock, produces nothing except a little fruit in a few gardens of the richer inhabitants: every necessary of life is imported, and the sea being their only resource, all the men of the place are naturally seamen. There are belonging to the island fifty large saccolevas (a boat used for sponge fishing) and as many small fishing boats; and it would seem that their gains abroad are great. Turner
In 1309 the Knights of Rhodes landed on the island and built a castle on a hill overlooking on one side the harbour and on the other a small valley where some farming could be developed. The harbour is not visible from the open sea and the Knights kept there a fleet of light ships for their raids. A small arsenal built and repaired these vessels: the inhabitants acquired a reputation as carpenters and seamen which lasted until the early XXth century. 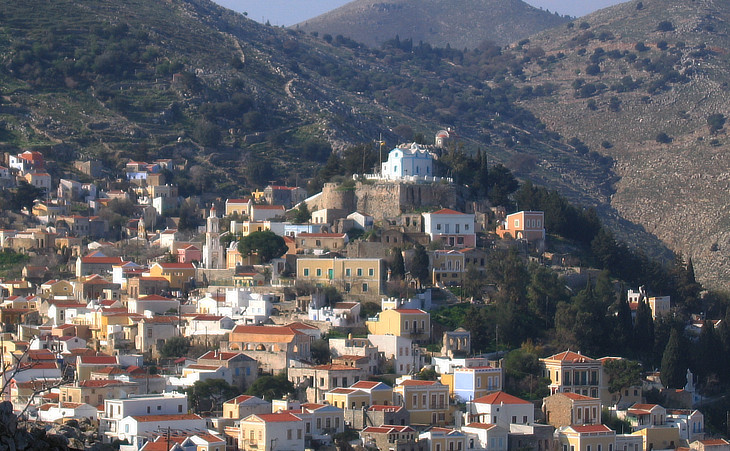 View of the upper town

I went in the morning to the principal coffee-house, a large naked chamber, with broad high-raised platforms on each side, on which were sitting crowds of Greeks playing at drafts, backgammon, and a game called magala. Here I found a Greek doctor dressed as an European, who had studied medicine in Pisa and was a sensible well informed man. I was glad to contract his acquaintance, to ask him a few questions. (..) From questions and observation, I have obtained the following information respecting Symi. The island is only nominally governed by the Aga deputed from Rhodes: The real power is in the hands of about twenty chief Greek families, of whom an unfixed number govern by rotation and without the consent of these the Aga can do nothing. (..) In consequence the islanders enjoy entire liberty, and are subject to no vexations. Turner
The old town surrounded the castle and only in more recent times it expanded towards and around the harbour.

Views of the northern and western sides of the castle: photo taken on "Katari Deytera" (Ash Monday) when the traditional lunch is based on octopuses, shrimps, sea-urchins, etc.

While the men are abroad, gaining by a carrying trade between Smyrna, Constantinople, Salonica, etc, all the domestick affairs of the island are carried on by women, who are the porters, bakers, butchers, shopkeepers, etc, of the place: I never was more astonished than when on telling George to find a porter to bring up my trunk (weighing about forty pounds) from the scala to the town, I saw him enter followed by an old woman of sixty carrying it on her back, and for having brought it up that steep rocky hill of a mile's length - which I would not have done myself for fifty pounds - I was told I was to pay her three paras, and when I offered her twenty, I could hardly persuade the old lady to take them, for she said it was a shame. Turner
The northern and western sides of the castle were protected by the steepness of the hill: there was only one mule-track leading to the old town. The steps you see in the image (far right) were added in the 1920s when the island was under Italian administration.

Remaining walls of the castle

Sunday, December 3d. - Early in the morning I climbed to the ruins of a Venetian (!) castle, built on the peak of the rock on which stands the town, of which, and of the ports, it commands a complete view: I say of the ports, for besides that on which stands the Scala, there are two other capacious ones, admirably sheltered, one on the same (north) side of the island, and one on the east, and there are others on the other side. On the site of the castle the inhabitants suppose the ancient city to have stood; and judging from the usual choice made by the ancient Greeks of positions for their cities, I think their conjecture a very probable one: this site, if defended by resolute men, must have been impregnable in ancient warfare. Turner
The castle was strengthened by Grand Master Emery d'Amboise in 1507 by adding a round bastion. It was greatly damaged during WWII and the portal at its entrance and its upper part were lost. 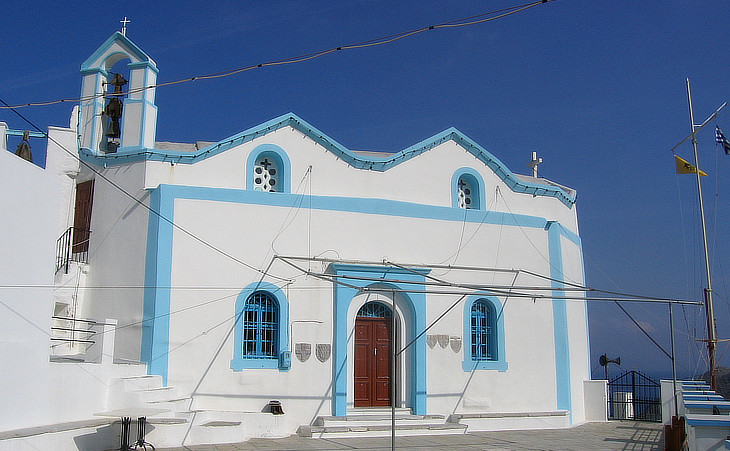 Church at the top of the fortress

The only inhabitants of the island, (except the priests of three Greek convents,) live in the town, (there being no villages) which is built near the top of a high rocky mountain, and contains from 1,800 to 2,000 houses. The streets are in general from three to five feet wide, unpaved, hilly, rocky, steep, and dirty; but the houses are neat, white-washed outside, and comfortable within: they are in general paved within with small stones as at Rhodes, and the chambers of the rich have two elevated platforms at the two extremities, to which they ascend by three or four steps, and on which they have their divans by day, and their beds by night. (..) The island is subject to the ecclesiastical government of the Archimetropolite of Rhodes, who visits it twice or three times a year. Turner
There are two small churches on the site of the castle: the larger one has been painted with the colours of the Greek flag. 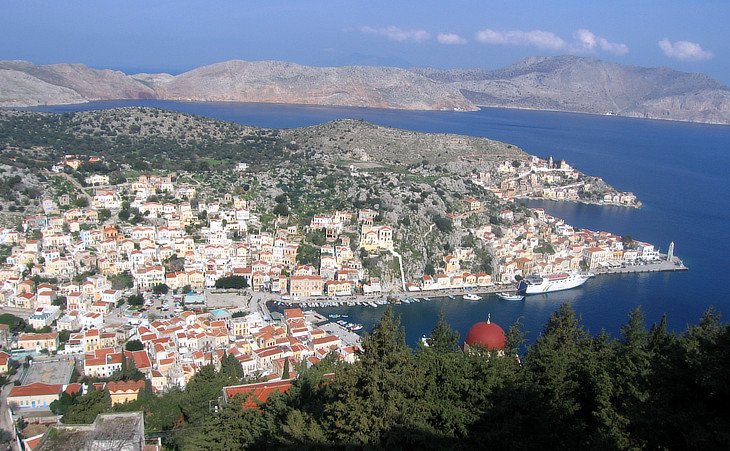 Views from the church: the northern part of the island and the Asian mainland behind it

The view commanded by the hill on which it stood was delightful; before us to the north was the port, so entirely inclosed that its water was without a ripple, while the sea, was agitated by a gale without; (..) and the view was finished by the mountains of Caramania (the name given to the Southern Coast of Asia Minor which for some centuries was ruled by the Emirs of Karaman), which frowned round us on every side. Turner 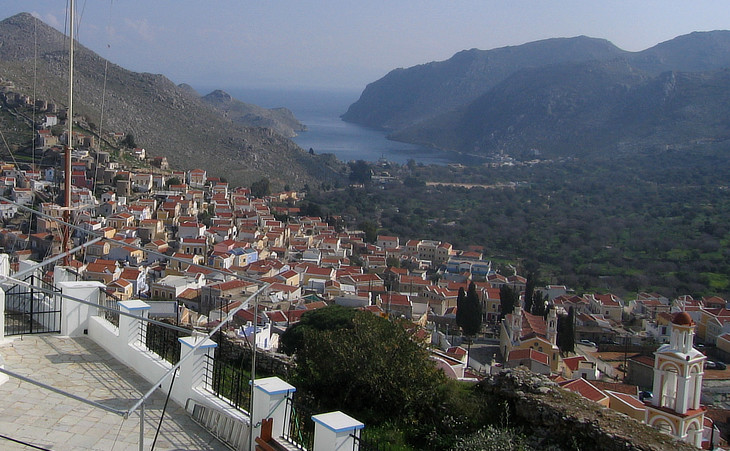 Eastern valley and harbour seen from the church

On the other side was a small valley (east of the town) about one hour in circumference, which was all laid out in small gardens, divided by stone hedges, and planted wift a few fig, olive, lemon, Orange trees, vines, etc of which the vegetation (almost the only vegetation in the island) formed a fine contrast with the craggy rocks that over-hung it; this valley was terminated by the large port east of the town. Turner