- Nissiros
(relief in the fortress of Bodrum)

Nissiros has the typical almost circular shape of a volcanic cone: the life of the volcano is in its last stage: the crater has just a few fumaroles, openings in the ground from which sulphurous gases emerge.

Due to the nature of the island its soil is very fertile and it is full of vegetation in particular almond-trees; for the same reason it does not have coves or bays which could be used as harbours. Mandraki, the village on its northern coast, notwithstanding its name meaning small harbour, did not have appropriate mooring facilities even for the ships of the past.

View of the Castle

Nissiros became a possession of the Knights of St. John soon after they completed the conquest of Rhodes in 1308. Because of its smallness it was assigned, in line with a practice common in the feudal system, to a knight who ruled it on behalf of the order. Only in the XVth century and in particular in its second half the rock overlooking Mandraki was fortified.

Remaining walls of the castle

Towers and walls protected only the eastern (land) side of the rock because the cliffs facing the sea were high enough to discourage assaults from the other sides. The coats of arms on the remaining walls belong to Grand Masters Milly (1454-61) Orsini (1467-76) and d'Aubusson (1476-1503).

The site of the castle of the knights is called the monastery by the locals, due to the old monastery built within it, while they call (Paleo)Kastro the ancient fortified acropolis of Nissiros, which is located one mile south of the castle. 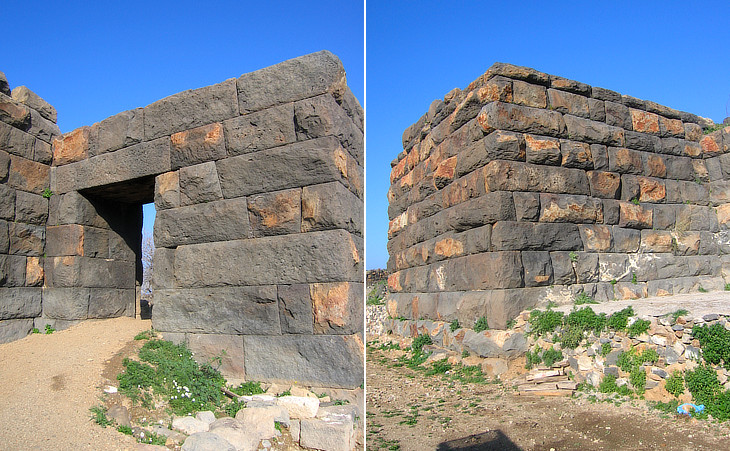 Details of Paleokastro: (left) one of the towers; (centre) wall showing in its lower part an earlier layer; (right) a "Florentine" corner

The walls of the ancient acropolis were built by placing next to each other carefully cut stones: at some locations it is possible to see an earlier layer of the wall built with a less refined technique. Towers at each angle of the walls increased the strength of the fortification.
The restoration of the towers has perhaps gone too far: the corner of one of them is more typical of a Florentine Renaissance palace than of an ancient artefact.

View of Mandraki from Paleokastro: in the distance the islet of Yialis and (far left/barely visible) Kos