- Introduction
(relief in the fortress of Bodrum)

On the thirteenth we came near the east end of the isle of Rhodes, where there was so great a current coming from the north east between the island and the continent, that the sea broke in at the cabbin windows, even in calm weather. (..) This island is also noted in history, as having belonged to the knights of St. John of Jerusalem.
Richard Pococke - A Description of the East and Some Other Countries - 1745
The city of Rhodes is situated close to the northernmost extremity of the island, facing the mainland, with a north-eastern aspect. (..) The later glories of the place, when it became the stronghold of the Knights of St. John, and one of the bulwarks of Christian Europe against the Ottomans at the height of their power, have almost eclipsed its ancient fame.
Henry Fanshawe Tozer - The islands of the Aegean Sea. Publ. 1890, but Tozer began his travels in 1874.
From 1309 to 1523 Rhodes, the largest island of the Dodecanese, was occupied by the Knights of St John of Jerusalem. They transformed the island capital into a fortified city able to withstand sieges as terrible as those led by the Sultan of Egypt in 1444 and Mehmet II in 1480. Rhodes finally fell in 1522 after a six-month siege carried out by Suleyman II.
From the UNESCO synthesis of the universal value of the Medieval City of Rhodes which in 1988 was added to the World Heritage List.
In 1291 Acre, a port in northern Palestine, fell into the hands of the Sultan of Egypt: it was the last remnant of the Christian Kingdom of Jerusalem: its loss led Pope Boniface VIII to call the first Jubilee Year, in 1300, which granted special indulgences to those sinners who visited Rome and prayed at St. Peter's tomb, thus replacing the pilgrimages to Jerusalem.
Two Christian military orders showed all their valour in the defence of Acre: the Templars and the Hospitallers (Knights of St. John). The latter order had as its primary objective providing shelter and medical care to pilgrims, but it also protected them during their journey, which accounts for its military organization: the knights who joined it came mainly from southern France: they were usually cadets of noble families who looked for an opportunity to serve their faith and show their gallantry. The Order was named after the first hospice which was dedicated to St. John (most likely St. John the Baptist). 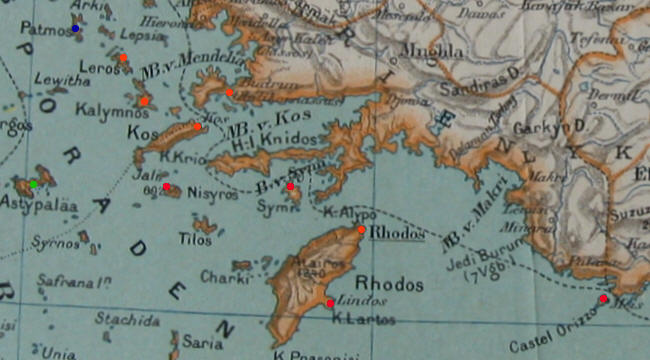 After the capitulation of Acre the Hospitallers went to Cyprus which at the time was a Christian kingdom ruled by the Lusignan family. The Order was able to reorganize its structure and its ranks, but it lacked a mission; a reconquest of the Holy Land was out of the question and the King of Cyprus regarded with some suspicion the Knights' presence on the island. In 1306 Vignolo de' Vignoli, a Genoese adventurer who had a foothold on the island of Rhodes made a proposal to Grand Master Foulques de Villaret (the head of the Order) that they join forces to conquer the island. Rhodes was a possession of the Byzantine Emperor, so the Grand Master's decision was not exactly within the scope of the Order: Pope Clement V however provided him with the religious endorsement he needed by assigning Rhodes to the Order of St. John.
The conquest of the island was not an easy one; the Byzantine Emperor was not able to send troops, but the inhabitants of the main town (Rhodes) managed to check the Knights' assaults: only on August 15, 1308 did the defenders capitulate, but the Knights had to concede them the right to retain their Orthodox faith.

Coats of Arms of the Grand Masters

The image used as background for this page shows a coat of arms of Grand Master (and Cardinal) d'Aubusson in the fortress of Kos.