- Castelrosso (Kastelorizo)
(relief in the fortress of Bodrum)

Castelrosso is a very small island located 72 miles to the east of Rhodes and only two miles off the Turkish coast. In ancient times it was called Megisti (Greatest) with reference to a group of islets next to it. Its current name derives from the castle built by the Knights of St. John who occupied the island in 1306 as a useful base prior to landing on Rhodes.

View of the bay

The only valuable resource of the island was its very well repaired bay on the route between Rhodes and Cyprus.

The island belongs to Greece and is the easternmost point of the country; due to tense relations between Greece and Turkey a large part of it is under military control. Hopefully since the 1990s the two countries are on a "building trust" path: the Greek sentinels who from the old castle are in charge of checking with binoculars the enemy's move, spend their day fiddling with cellular phones. 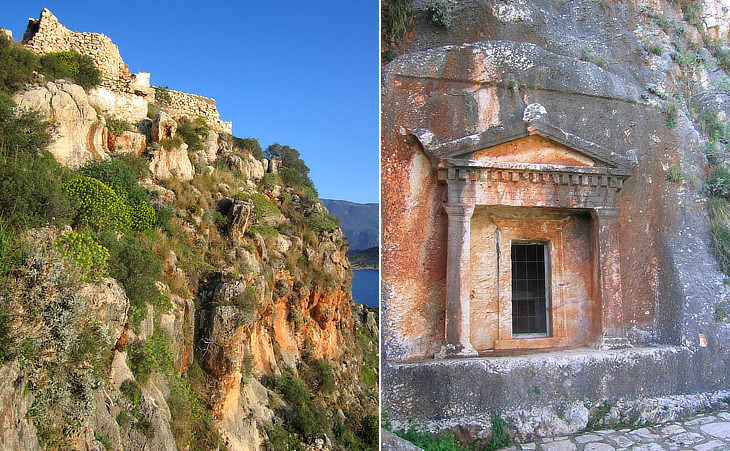 (left) The red rocks below the fortress; (right) Lycian tomb

Castelrosso in Italian means red castle and it is generally thought that the name is a reference to its red rocks; in some old maps however it was called Castel d'Orizzo or Castel Ruggio which some believe to be a reference to Grand Master Juan Fernando Heredia (1377-96) who strengthened the castle. It is not to be confused with Castelrosso di Negroponte.
Ancient Megisti was part of Lycia, a region of today's Turkey known for its rock cut tombs, one of which is located on the cliff below the castle.

Southern (left) and northern (right) sides of the remaining tower

The Grand Masters of Rhodes considered Castelrosso as an exile location and they sent there the knights who breached the rules of the Order. In 1440 the island was raided by the Mameluke Sultan of Egypt and the castle was greatly damaged; the Ottomans briefly seized the island in 1479; in 1522, during the war which led to the capitulation of Rhodes, they occupied it on a permanent basis. 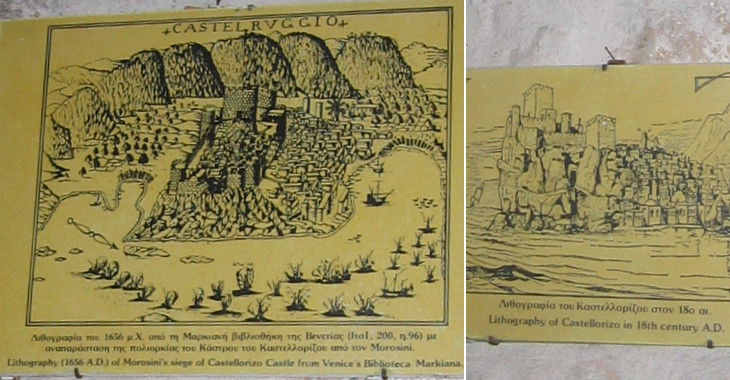 In 1570 the Ottomans landed on Cyprus (at the time a Venetian possession); they easily conquered Nicosia and Kyrenia. The Venetian navy moved out of Crete in order to bring supplies to Famagusta, the main town of Cyprus which the Ottomans had not yet managed to conquer. The Venetians occupied Castelrosso and used it as an advanced base for their navy; with the fall of Famagusta in 1571, the island returned to Ottoman hands.
The Venetians led by Morosini raided the island again in 1658 and dismantled the castle: the raid was carried out to create a diversion during the siege of Candia.
In the XIXth century Castelrosso knew a period of great prosperity as an intermediate call on the route between the Aegean Sea and the Near East. Apart from a small Ottoman garrison, the governor and a few civil servants, the inhabitants were all Greek: in 1912, during the Italo-Turkish War, there was a rebellion against the Ottoman rule: this started a long period of trouble which worsened during WWI when Castelrosso was occupied by French troops and the Ottomans shelled it from the mainland. Eventually the island was assigned to Italy and included in the Dodecanese possession; its good days however were gone forever. A survey made by Italian authorities found that half of the houses were abandoned: in addition the bay was too small for modern ships and maritime routes no longer followed the coast. 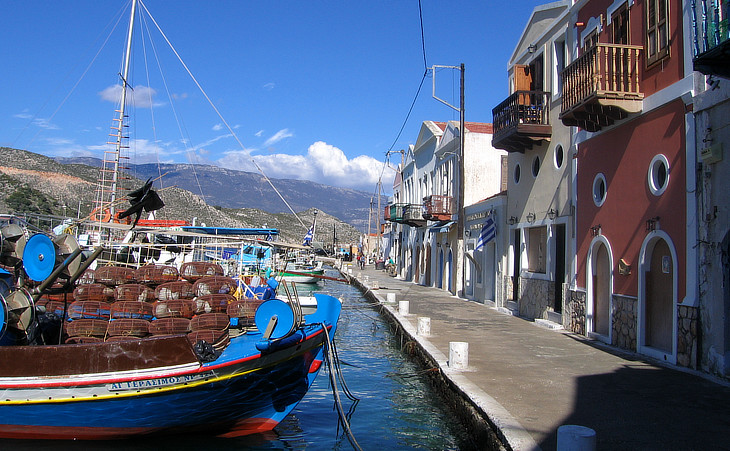 (left) Remaining part of the town; (right) the waterfront

WWII brought even greater damage than WWI: the bay was used by the Italians for their raids against Alexandria; in 1941 it was taken by the British forces and retaken by the Italians two days later; in 1943 it was again occupied by the British who declared it a military zone and transferred the civilians to Cyprus; a fire destroyed most of the town; then the Germans dislodged the British.
Today the island is a charming place not yet changed by an excessive number of tourists. It was chosen by Italian Director Gabriele Salvatores as the set for his movie Mediterraneo, winner of the 1991 Oscar for Best Foreign Language Film.