Nicosia is surrounded by walls which form as far as I could see and as I was told a hexagon (actually a hendecagon, an eleven-sided polygon); they are very broad being double and having the middle space filled with trodden earth. The upper half slopes like a pyramid and at intervals some parts project to defend the others. They are of unequal height in some parts of thirty and in some of forty feet. (..) A few Venetian cannon remain on the ramparts and these are immoveable from the ruined state of their wooden carriages. (..) The Greeks told us that to encompass the city requires an hour and a half on horseback which would give it the not improbable circuit of four and a half miles.
William Turner - Journal of a Tour in the Levant - 1815. 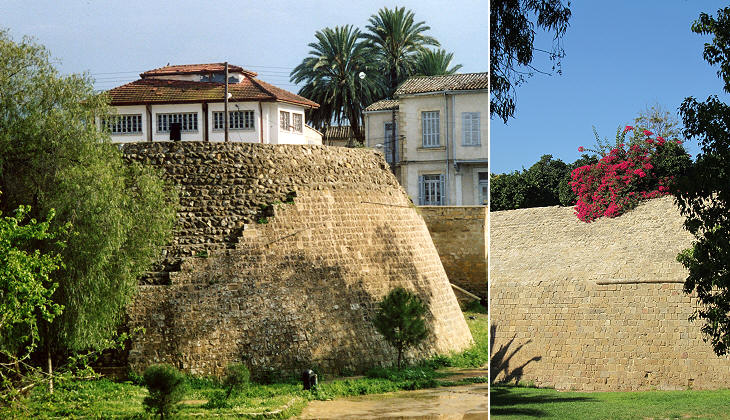 (November 1738) Nicosia is the capital of Cyprus, where the governor resides; it is fortified with very large ramparts, but has no fossee, and consequently is a very indifferent fortification; the ramparts are faced with the hewn stone of the old walls; the circumference of them is about two miles. The walls of the antient city, which were built with semicircular towers, may be traced all round, and they seem not to have been much less than four miles in compass.
Richard Pococke - A Description of the East and Some Other Countries - 1745
Nicosia was the capital of Cyprus during the rule of the Lusignan family (1192-1474); its location at the centre of the island was in line with the feudal system introduced from France. The Venetians preferred to move the residence of their governor to Famagusta, the main port of the island; they did not care much about the fortifications of Nicosia until 1565 when the Ottomans made an attempt to seize Borgo (Malta). The Venetians realized that the medieval walls of the town did not ensure an adequate protection against cannon warfare and they were too long for the small local garrison to defend. A new enclosure was designed which had the shape of an eleven-pointed star with a bastion similar to an arrowhead at each end. All buildings outside the new walls were expected to be pulled down. 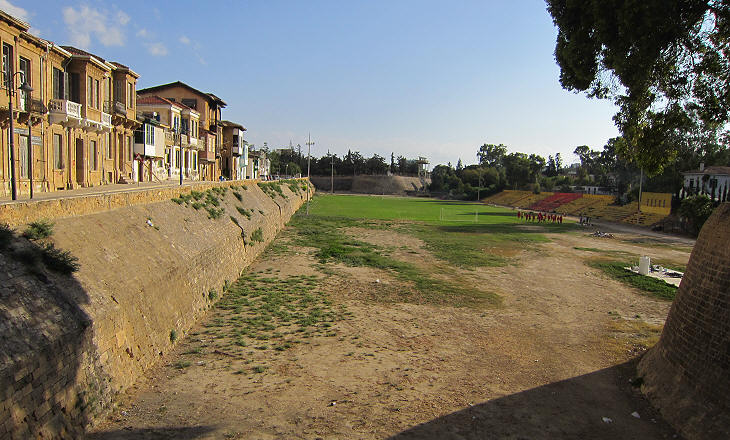 Walls between two bastions in the Arabahmet neighbourhood

The walls were yet to be completed when in March 1570 Sultan Selim II sent an ultimatum with insulting terms to the Council of Ten in Venice, demanding the immediate cession of Cyprus: a few months later an Ottoman army landed near Salina (Larnaca), on the southern coast of the island, and laid siege to Nicosia on July 25. On September 9 the Ottomans managed to conquer one of the bastions and overwhelmed the Venetian garrison; Lala Mustafa Pacha, the Ottoman commander, deliberately acted with great cruelty with the objective of sending a message to the defenders of Famagusta and Cirenes (Kyrenia), the other two Venetian fortresses on Cyprus: Niccolò Dandolo, the Venetian commander, was beheaded and his head was sent to Marcantonio Bragadin, the commander of Famagusta in a tin box. The enclosure had only three gates. They were designed in order not to weaken the defensive system. Their inner side had a proper façade and was decorated with the coats of arms of the officers who had promoted its construction. The external gate was very plain and it was almost hidden in the inner angle of an arrowhead bastion. This can best be seen at Candia, the walls of which are very similar to those of Nicosia, but are in better shape. 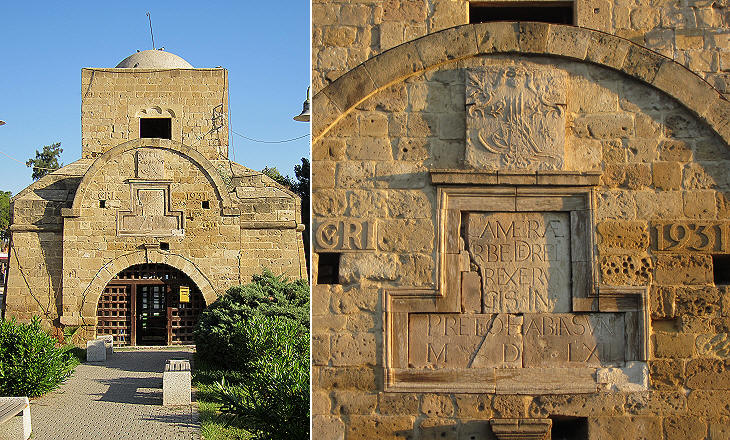 The northern gate which today embellishes the large street which interrupts the walls is a fake in the sense that only the inscription and the tughra are original (you may wish to see the original gate in a separate window). A third gate, of which only the long underground passage remains was situated in the south-western part of the enclosure and it was the arrival point of the road from Paphos. 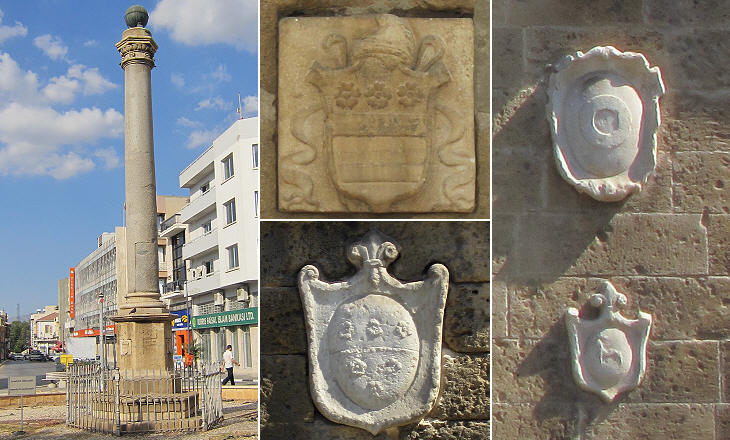 The Venetians placed a column supporting a winged lion in Piazza S. Marco in Venice and they did the same in all the main towns of their territories. At Nicosia they utilized a granite column from Salamis, an ancient town near Famagusta. Apart from this column and the imposing new walls the Venetians did not build other monuments in Nicosia. Turner remarked in his book: It is astonishing how few Venetian remains there are in Nicosia.

An abandoned lintel near the Cathedral with three coats of arms; the central one was most likely that of the Kingdom of Cyprus; the right one is of the Lusignan family whereas the left one belonged to a local noble family

The image used as background for this page shows a relief near the Cathedral with another coat of arms of a local family. The Lusignans ruled Cyprus for nearly three centuries and they did so by introducing the feudal system which meant that other families from France played a major role in the running of the state. The Ibelin family held important positions including that of seneschal, a royal officer in charge of the administration of justice; similar to the Ibelin, the Giblet held key positions; these and other families took sides in various quarrels which occurred in the House of Lusignan. Henri de Giblet was one of the three knights who in 1369 assassinated King Peter I in his own bed. 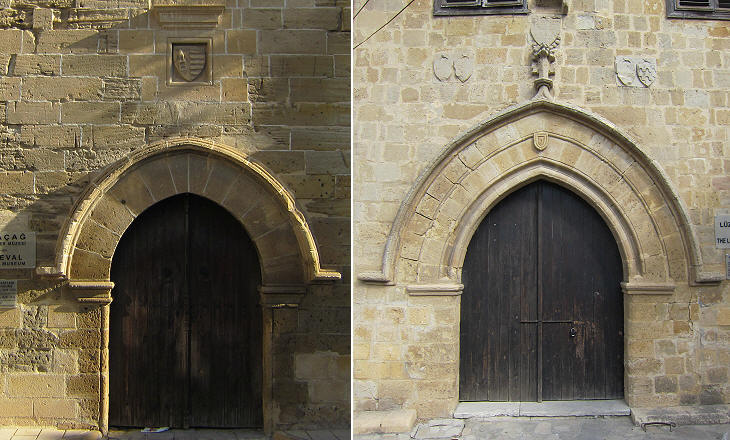 There are still remaining in the city several very magnificent houses, which are of the times of the kings of Cyprus; some of them have been repaired by the Venetians, according to the rules of modern architecture; and there is a most beautiful Corinthian door-case of a house which, they say, belonged to the Venetian general. Pococke
The influence of the local noble families subsided in the last years of the kingdom when Italian and Catalan merchants and bankers replaced them as advisers to the king and were assigned the most important positions. The Kings of Cyprus usually resided at La Cava Castle (The Quarry, actually an ancient cistern) on a hill outside Nicosia for greater security. In 1570 the Venetians blew up the building which could have been used by the Ottomans. 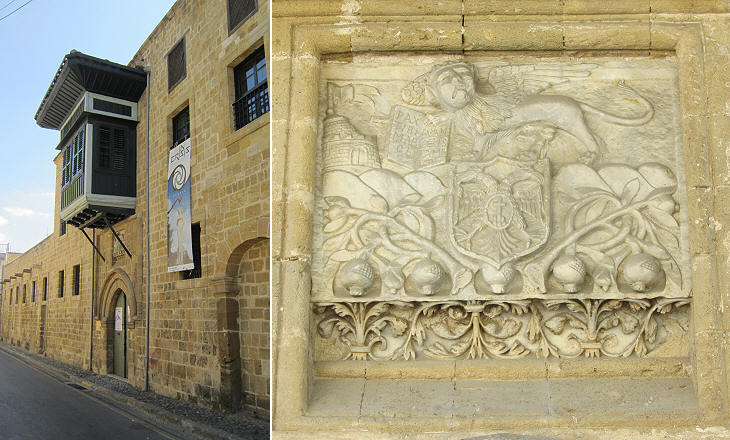 (left) Kornesios House; (right) relief over the entrance showing in the upper section a crowned Winged Lion, the symbol of the Kingdom of Cyprus during Venetian rule and in the lower one religious symbols such as the double-headed eagle of the Orthodox Church, the Golgotha and pomegranates, usually symbols of Resurrection, but occasionally of the Church. It is possible that the upper section was made at a later time as its background plane is deeper

Kornesios House was built at the time of the Lusignans. It then housed a Venetian institution. It was turned into an Ottoman mansion by Hadjigeorgakis Kornesios, Dragoman of the Greek community on Cyprus in 1799-1804, who was in charge of collecting taxes on behalf of the Sultan. Dragoman usually designates an interpreter, but in a broad sense it applies to leaders of a minority community as well. 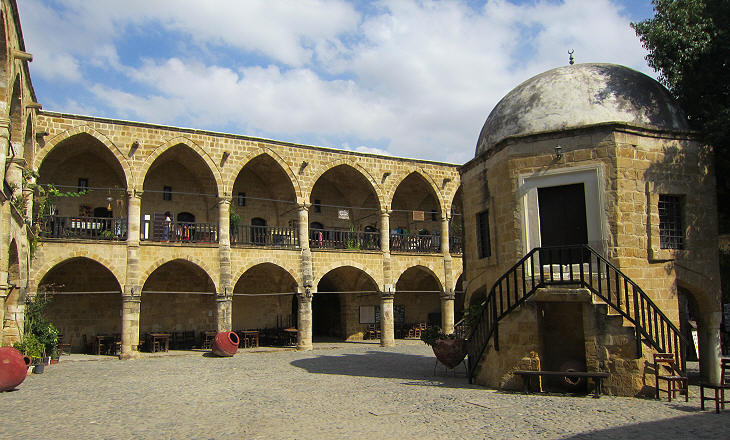 During the Lusignan and Venetian rules Cyprus was an outpost of Europe in the Levant which meant it was an important trading centre. The Ottoman conquest made the island a negligible portion of a vast empire. The caravanserai which was built soon after the conquest of Nicosia is perhaps the only major addition the Ottomans made to its monuments. The population of the town declined and what was a cosmopolitan city became a village of peasants albeit surrounded by imposing walls.
All the present houses are of mud which like those of Larnaca require yearly reparation to keep out the rain. (..) The gardens within the walls are well cultivated and abound in fig, olive, mulberry, orange, lemons and pomegranate trees. Turner 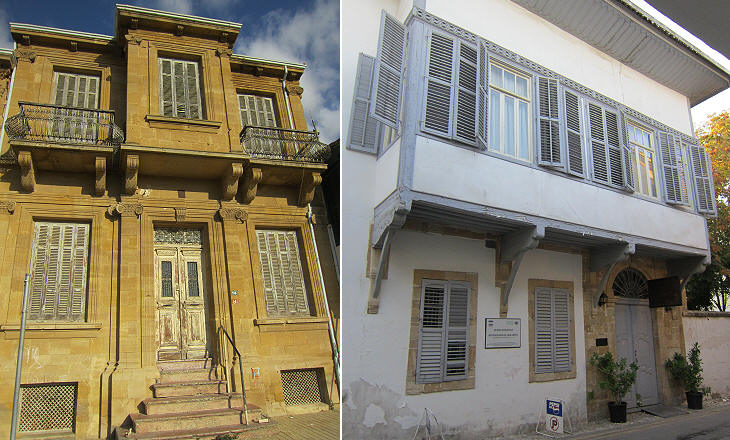 At the 1878 Congress of Berlin, Britain helped the Sultan to reduce the effects of a disastrous war against Russia. In return she was given the administration of Cyprus. The island was again well placed along trade routes because of the 1867 opening of the Suez Canal. Nicosia experienced a period of rapid development. New houses were built in the Arabahmet district in the north-western section of the town. Greek and Turkish families lived side by side, but the design of their houses was different. The Greeks decorated them with pilasters and capitals whereas the Turks retained the projecting rooms of Ottoman tradition (see the houses of Safranbolu which have retained their original design). 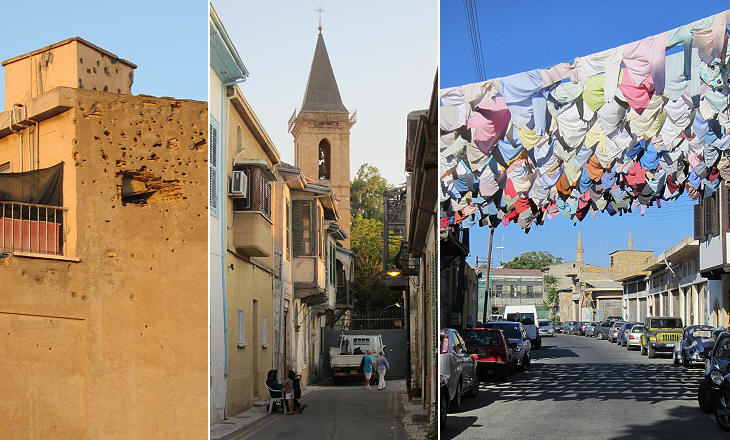 Wandering near the Green Line (UN buffer zone): (left) building with holes made by bullets; (centre) a dead-end street; (right) a temporary installation by Finnish artist Kaarina Kaikkonen. "Her installation in Nicosia is called "A Connection, and comprises shirts of many sizes and colours which represent connections between people and countries. The allegorical message of this installation is particularly important for the capital of Cyprus: Ermou Street  the road in which the installation takes place  is an otherwise neglected neighbourhood, very close to the UN buffer Zone, but one which has great historical and architectural value. The shirts are attached between the only modern building of the area, The Shoe Factory, and the derelict houses across the road, signifying thus the connection of the old and the new, the neglected and the preserved, as well as the multicultural human dimension and subtle political distinctiveness of the area." (Pharos Arts Foundation) (see another installation by Kaarina Kaikkonen in Rome)

In 1974 Nicosia was partitioned along ethnic lines. The previous version (2002) of this page covered only the northern/Turkish sector of the town, as there were constraints to moving back and forth between the two sectors. In 2012 these constraints did not exist any longer. The two Mayors of Nicosia have worked together to reduce the impact of the division in sectors, at least for foreign visitors. Tourist maps show the monuments of the whole town and on purpose in this page they have been described without references to Turkish or Greek sectors.

Move to other pages of this section:
Famagusta - The Walls
Famagusta - Main Churches
Famagusta - Other Monuments
Nicosia - Churches and Mosques
Cirenes (Kyrenia)
An Excursion to Bellapais
Larnaca
or see some castles of the Crusaders in the southern part of Cyprus.