- Ancient Towns on Cyprus
(Petra to Romiou, where Venus was born) 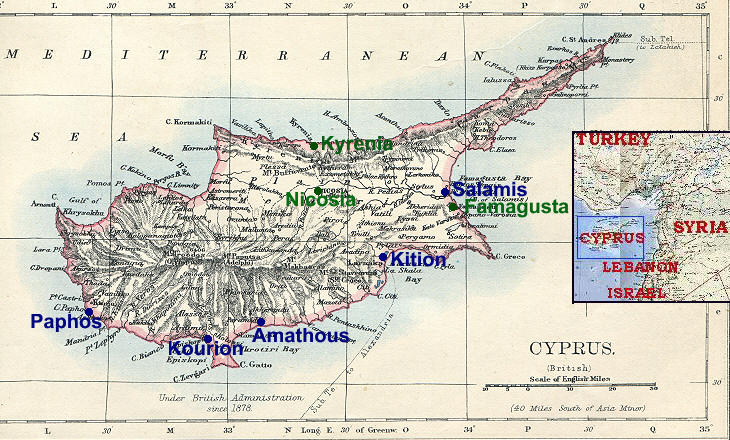 (November 1738) Cyprus, on account of its situation, and the cheapness of all sorts of provisions in the island, is the place where almost all ships touch on their voyages in these parts; and by this way a correspondence is carried on between all the places of the Levant and Christendom.
Richard Pococke - A Description of the East and Some Other Countries - 1745
Cyprus is situated at the eastern end of the Mediterranean Sea opposite the coasts of today's Turkey and Syria. The first inhabitants came from the Asian mainland; archaeologists have found arrows and spears with obsidian heads at very ancient villages; because this stone was not available on Cyprus its presence indicates that trade with the mainland developed at a very early stage. 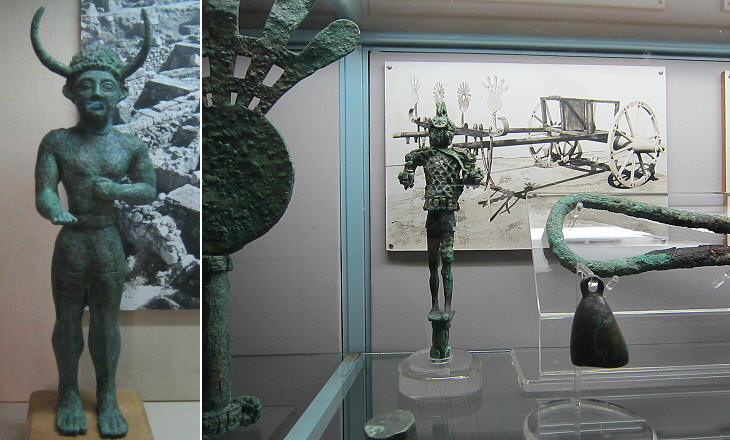 Cyprus has also been very famous for its minerals, and for many sorts of precious stones, which were probably found in the mines. (..) It is said that this island received its name from the cypress trees, which it is certain grow on it in very great abundance. Pococke
It is possible that the island was named after copper (Lat. cupra), the metal which in the IVth millennium BC could be found in places on the surface of the ground. Later on it was mined in the Trodos Mountains and shipped in ingots from Enkomi, near Salamis. Bronze metallurgy was favoured by the availability of copper (but tin was imported) and many bronze artefacts have been found. Cyprus is now divided into sixteen cadelisks; and it is probable that among them may be found the capitals of the fifteen kingdoms, into which, some say, the island of Cyprus was at first divided. Pococke
The development of pottery on Cyprus is due to contacts with Crete and Mycenae in Peloponnese. Owing to Greek influence a local fertility deity was associated with Aphrodite and shrines dedicated to the goddess were built at Palaia Paphos, Amathous and other locations. Similar to Greece, Cyprus was organized in city-states which occasionally grouped into a federation to face external threats. 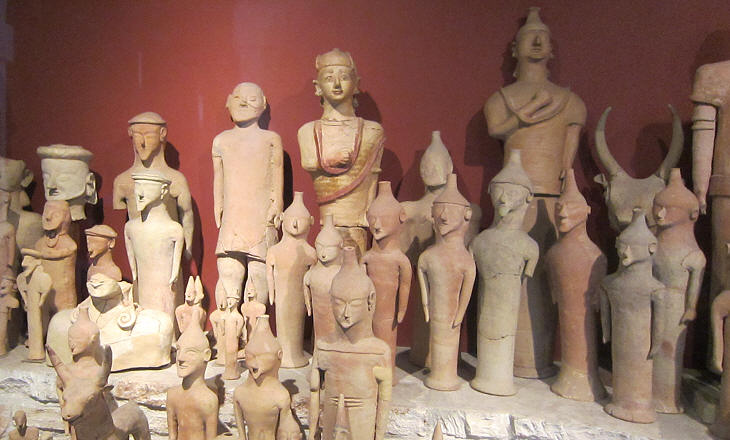 The first bulls were imported from Asia and the animal with its long horns became the object of worship similar to what occurred on Crete. It was probably seen as the king of the animals before being replaced in this role by the lion. The city-states of Cyprus were forced to acknowledge the sovereignty of the great continental empires (Hittites, Egyptians, Assyrians), but this did not impact on the way they handled their internal matters. 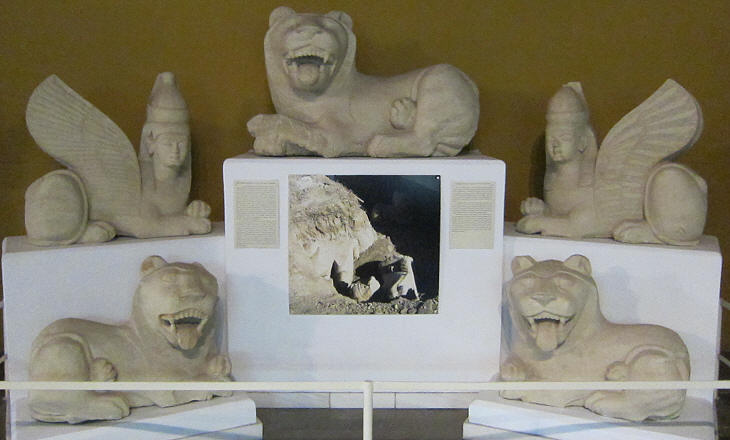 In the VIth century BC the Persians conquered Egypt, Syria and most of today's Turkey. Cyprus became a battlefield between Greeks and Persians, with the former launching expeditions to occupy the city-states supporting the Persians. 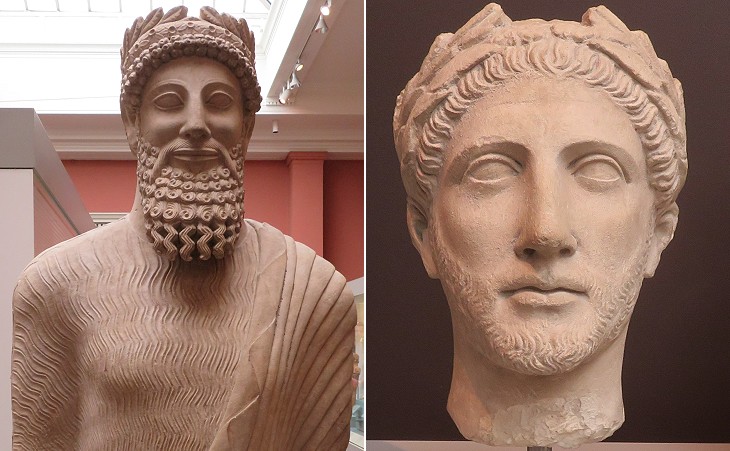 British Museum: statues found in a sanctuary to Apollo at Idalion, an ancient town near Nicosia and showing the passage to Hellenized patterns: (left) ca 450-425 BC; (right) ca 350-250 BC

Although the Greeks were unable to occupy the island, Cyprus became more and more Hellenized and the Greek alphabet was adopted. In the late IVth century BC Alexander the Great defeated the Persians; the partition of his empire which occurred at his death assigned Egypt and Cyprus to Ptolemy I. 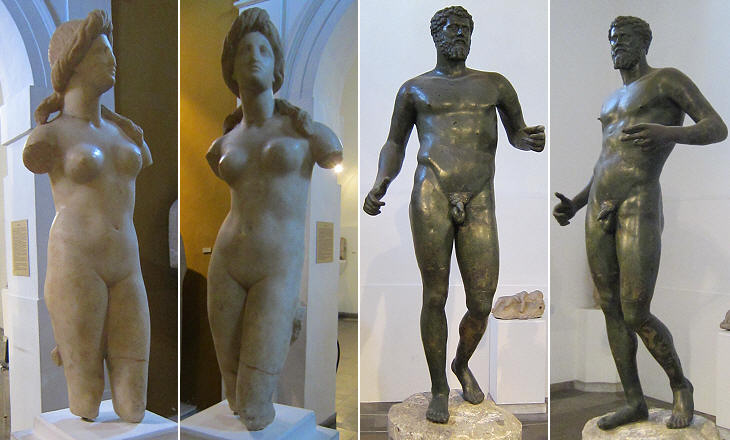 In 58 BC Cyprus was included in the Roman province of Cilicia, but it was only after the defeat of Mark Antony and Cleopatra at Actium in 31 BC that the island was occupied by Roman legions. Cicero was one of the first governors of the province and when in Cyprus he resided at Paphos on the south-western coast of the island. Most of the monuments and works of art shown in this section belong to the Roman period. 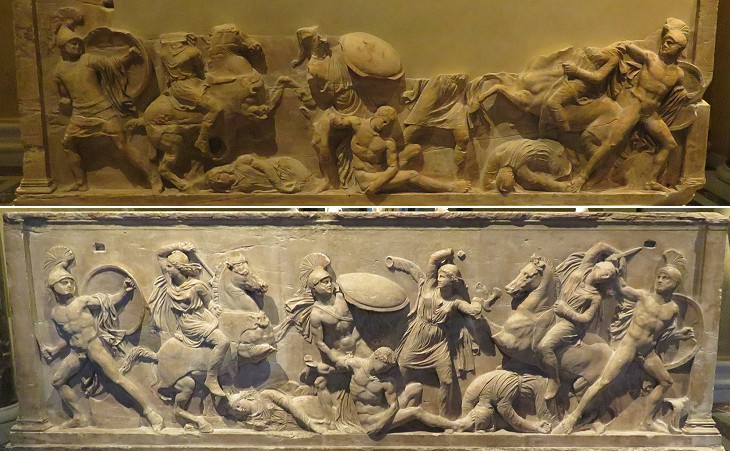 Kunsthistorisches Museum of Vienna: two almost identical long sizes of a sarcophagus depicting a fight between Greeks and Amazons which was found at Soloi

The first searches for ancient statues and reliefs were carried out by the Venetian governors of the island. In 1558 a fine sarcophagus was shipped to Venice where it was immediately regarded as a masterpiece of Greek art; it was bought by Hans Fugger, of the family of merchants and bankers of Augsburg. Eventually it was acquired by the Habsburg. The reliefs have similarities with those of the Mausoleum of Halicarnassus which were found in 1857. 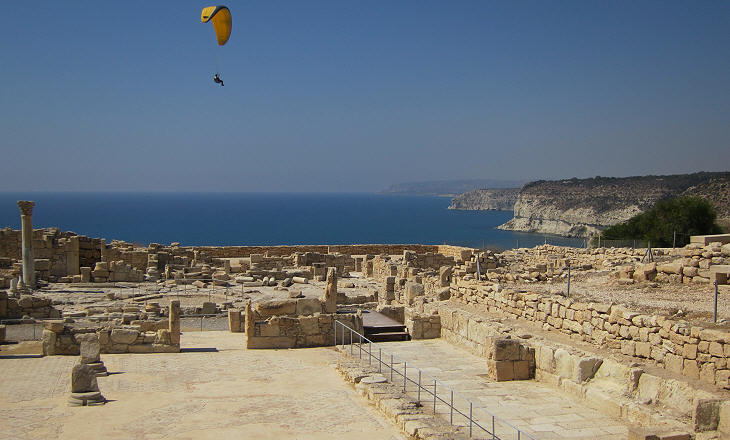 The main archaeological sites of Cyprus are situated on the southern and eastern coasts of the island. They provide a haven from the large sea resorts which were built in recent years. In general they are well maintained and have special facilities to allow close observation of mosaics without damaging them. Unfortunately at Paphos, Kourion and Salamis the ruins of the ancient theatres have been replaced by modern structures. 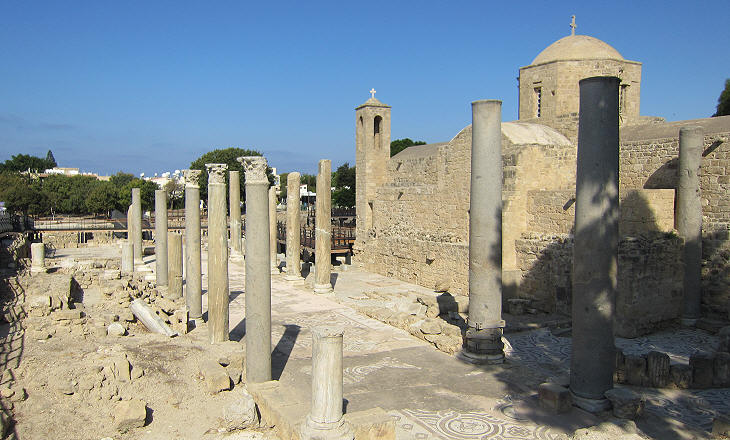 Cipollino and granite columns at Panagia Chrysopolitissa in Paphos

Some of the columns and capitals of the ancient towns can be found in early Byzantine churches or in Renaissance monuments built by the Venetians at Nicosia and Famagusta. 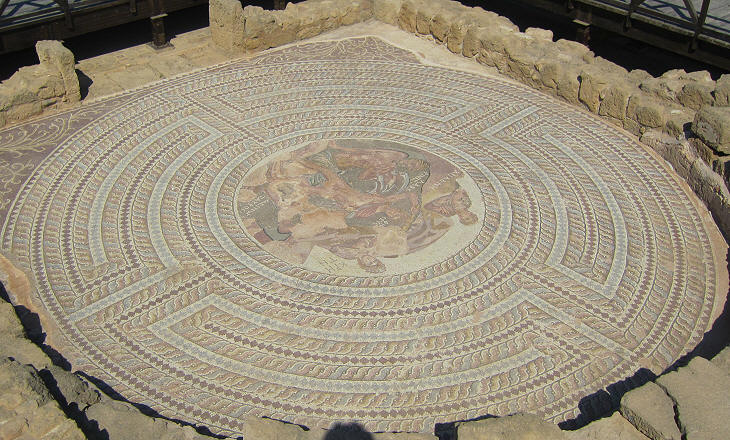 Coloured mosaics were widely employed to decorate the houses of wealthy people throughout the whole Roman Empire. The Museum of Antioch, one of the main cities of the Empire, displays an impressive collection of mosaics found on the mainland opposite Cyprus, but a group of houses found by chance at Paphos show that talented and skilled mosaicists were active on the island too.

The image used as background for this page shows a detail of a column at Kourion.