- Salamis
(Petra to Romiou, where Venus was born)

Between the two chains of mountains that stretch along the island, there is a large plain seven or eight miles wide, and between thirty and forty long, beginning about Famagusta; (..) This plain seems to have been the antient kingdom of Salamis founded by Teucer; the capital of it, which bore the same name, was at the east end of the plain on the sea. (..) This place is now called old Famagusta, and is about four miles distant from the modern town: There are remains of an aqueduct to this city.(..) (..) There are still large heaps of ruins on the spot of the antient city, and remains of the foundations of the walls, which seem to have been between three and four miles in circumference.
Richard Pococke - A Description of the East and Some Other Countries - 1745 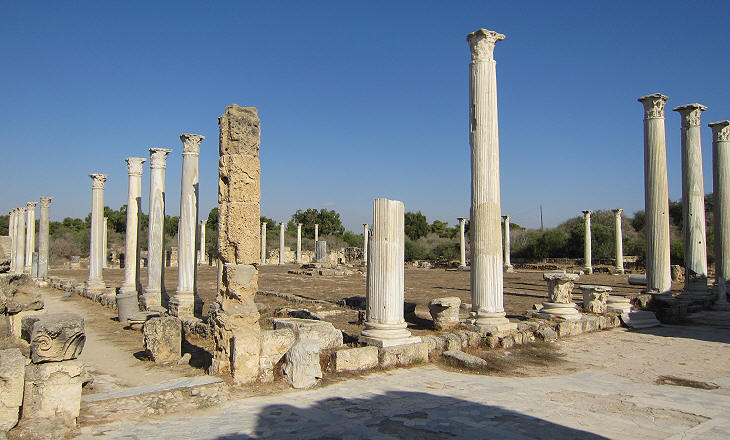 Gymnasium, initially believed to be a forum

On the north of the new town, just within the gate, there are several grey granite pillars lying on the ground, and two or three Corinthian capitals of grey marble cut in a very beautiful and particular manner. Pococke
The great white marble colonnade, originally more than 30 ft. high, at the north-east corner of the site, is perhaps the most imposing fragment from the Roman city. It is an object of particular interest as a work of art, although its origin and purpose remain unknown. In the Byzantine age this magnificent portico  much mutilated in all probability  formed the eastern side of an Agora or Forum built out of the remains of more ancient buildings.
George Jeffery - A Description of the Historic Monuments of Cyprus - 1918
First systematic excavations started in 1890. 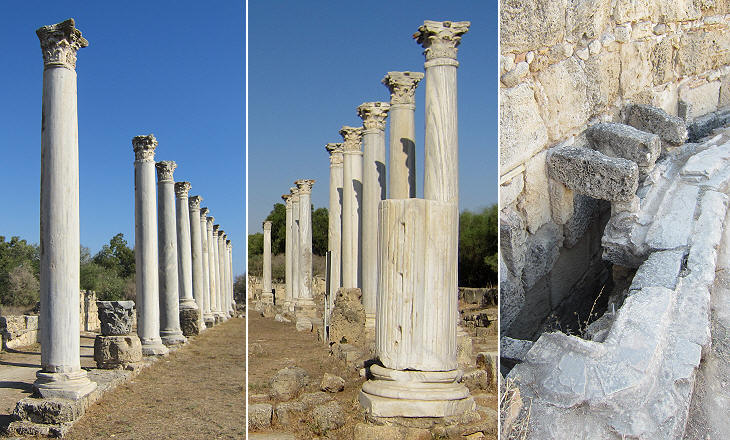 The Jews destroyed the old city of Salamis in the time of Trajan. Pococke
The use of coloured marbles is typical of the IInd century AD and the gymnasium was most likely built at the time of Emperor Hadrian, after Salamis had been greatly damaged in 116, during a revolt of the large Jewish community living on Cyprus.
In the Middle Ages most of the white marble columns of Salamis were calcined to make mortar, whereas granite columns were utilized to decorate churches and palaces at Famagusta and Nicosia. 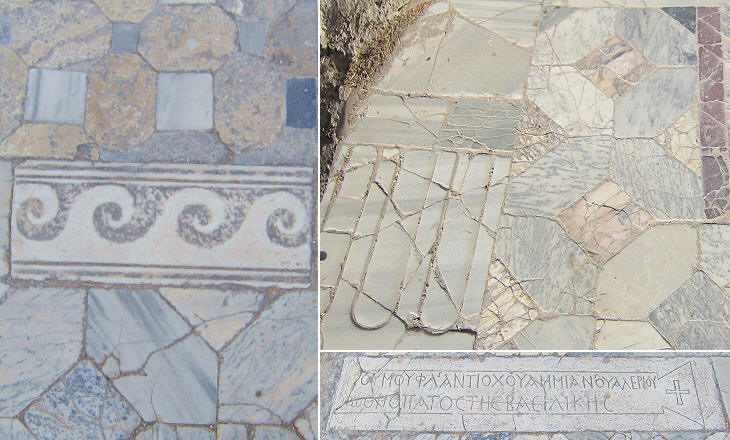 Gymnasium: details of the floor of the eastern portico

It was afterwards called Constantia, probably from the emperor Constantius; it was again destroyed by the Saracens under Heraclius, and probably it was not afterwards rebuilt. Pococke
A major earthquake hit Salamis in 331 and in the following year another earthquake struck Paphos, the capital of Cyprus on the south-western coast of the island (Salamis is on the north-eastern coast). Emperor Constantius II decided to rebuild Salamis and to move the residence of the governor there. The town was renamed Constantia. The eastern portico of the gymnasium was paved with marbles taken from fallen buildings. 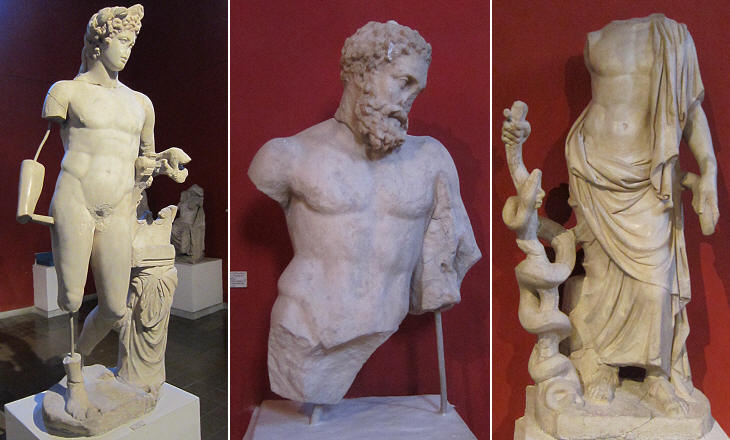 National Archaeological Museum of Nicosia: statues from Salamis: (left to right) Apollo, Hercules and Aesculapius; the image used as background for this page shows a statue in the Gymnasium of Salamis

The foundation of Salamis was probably linked to exports of copper, a metal found in abundance on Cyprus. This was shipped from Enkomi, a port situated to the south of Salamis which at one point was silted (today its ruins are situated some miles inland; interesting bronze artefacts have been found there). Salamis replaced Enkomi and Alexander the Great gave the town a sort of monopoly of copper trade. Salamis continued to flourish during the Roman rule and most of the statues found there were made in the IInd century AD. 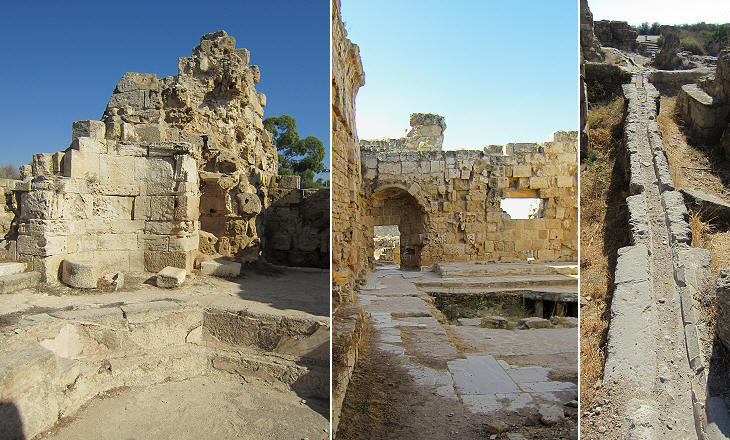 The Gymnasium was adjoined by baths which were repaired after the 331 earthquake. The baths were supplied with water by a long aqueduct, which according to an inscription was built at the time of Emperor Nero. Water was stored in a large cistern on the highest point of the town (see page two). 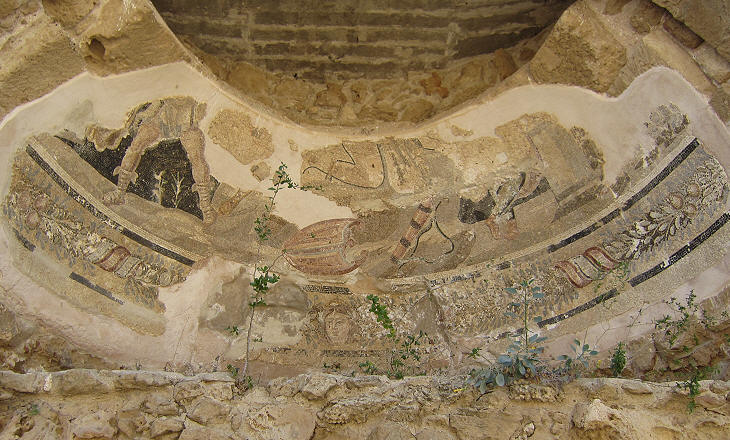 Baths: fragment of a mosaic portraying Apollo (left) in the act of shooting arrows at Niobe's children (in the lost section of the mosaic); the quiver near the shield is a symbol of Diana, Apollo's sister

The baths were decorated with mosaics portraying episodes of the Greek myths. A large fragment shows they were of excellent quality. The myth of Niobe is a symbol of punished pride: she despised Leto who had only two children (Apollo and Diana), whereas her offspring numbered ten (or fourteen), but the gods killed all her children and Niobe was turned into a weeping rock. 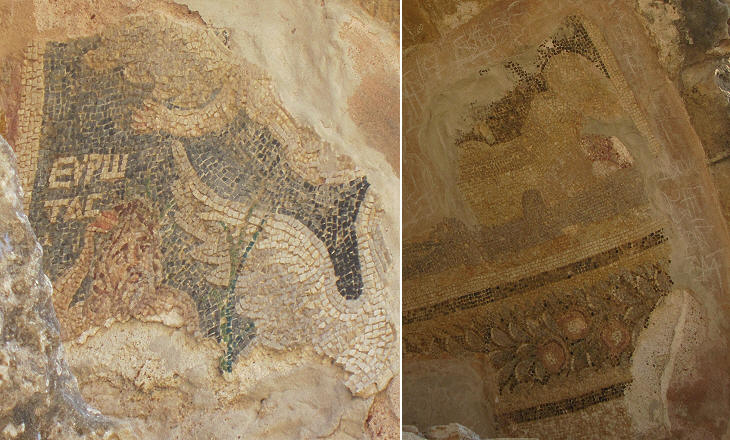 According to the most usual account Zeus companioned with Leda in the form of a swan. She laid an egg from which were hatched Helen, Castor and Polydeuces. From Robert Graves - The Greek Myths.
This tale was often depicted with other peculiar loves of Jupiter, e.g. in Thysdrus in Tunisia and Italica in Spain. 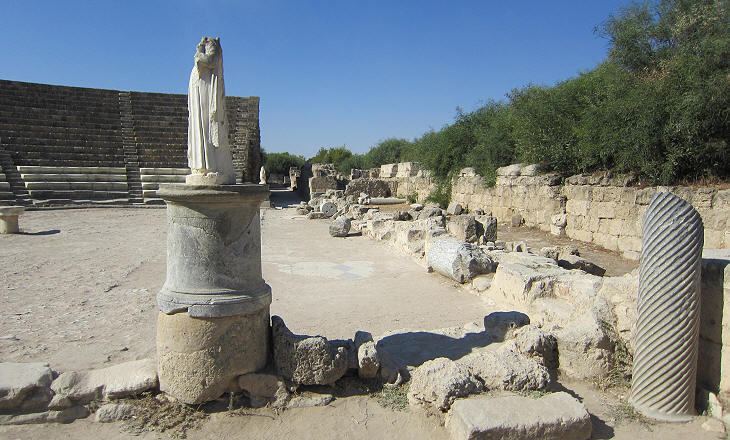 For a long time archaeologists concentrated their efforts on the area near the Gymnasium and the baths and they found evidence of a theatre, of a stadium and of an odeon, a covered hall for music and poetry contests. In recent years archaeologists have identified other baths, a colonnaded street and other Roman monuments which are spread over a large area. These monuments, together with two churches are shown in page two. This part of Salamis was abandoned in the VIIth century because of Arab raids; the reduced population of the town gathered inside a small fortified area, before eventually relocating to Arsinoe (Famagusta), a small port a few miles south.

Move to page two or to:
Introductory Page
Paphos
Amathous and Kition
Kourion