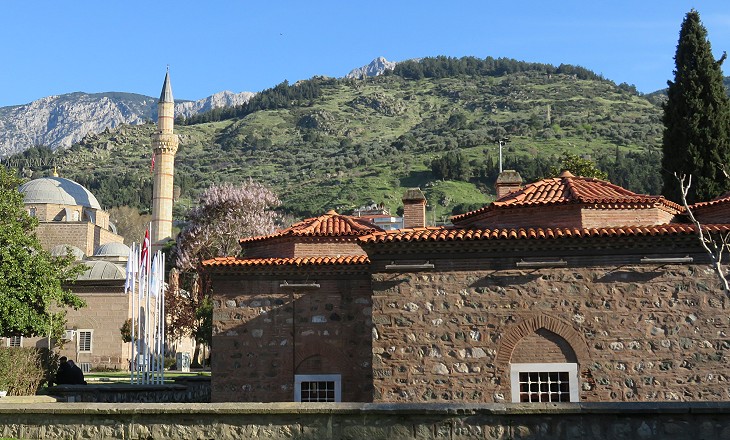 The situation of Magnesia is at once singular and picturesque upon a gradual ascent formed by an accumulation of earth, which shelving from the steep has left it entirely bare. As the ancient city partook more largely of the ruin that was spread over the Asiatic provinces by an earthquake in the fifth year of the reign of Tiberius, being nearly overwhelmed, it is possible that mount Sipylus assumed its present form.
James Dallaway - Constantinople Ancient and Modern with Excursions to the Shores of the Islands of the Archipelago and to the Troas - 1797
The view of Magnesia on approaching the town is the finest I have yet seen in Asia Minor. The steep ridge of Sipylus terminating abruptly at the left again reminded me of Sagalassus.
Francis Vyvyan Jago Arundell - A Visit to the Seven Churches of Asia - 1826 Girls looking for daisies on the hills at the foot of Mount Sipylus on April 4, 2015

I had an inclination to see the inland situation of (A)Natolia before I left its coasts and therefore set out on the ninth of March for Magnesia which is 8 hours travelling from Smyrna. I set out at sun rise accompanied by a Drogman (interpreter), an Armenian servant and a guide. We were all well armed which is customary in this country and frequently necessary in the shortest journey. We took horses from the caravan which goes every Wednesday and Sunday from Smyrna to Magnesia. (..) I seized the opportunity to see what plants the spring had brought forth. Saffron (Crocus Sativus Linn.) was the first and the most remarkable I found. The Hyacinth (Hyacinthus Orientalis) and Star Flower (Ornithogalum) were the other spring flowers I found here.
Fredrik Hasselquist - Voyages and Travels in the Levant in the Years 1749, 50, 51, 52. Translated into English in 1766. Hasselquist was a Swedish botanist and a scholar of Carolus Linnaeus. He travelled in the Levant to gather information about the natural history of the region. 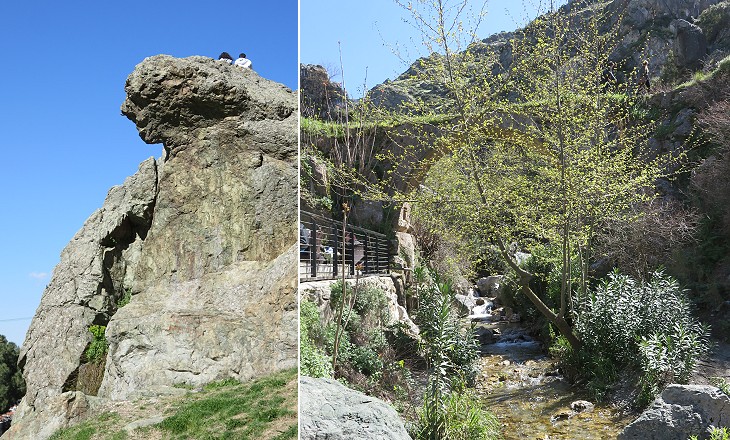 (left) Niobe's Rock. It recalls the profile of a weeping/screaming woman (with some imagination); (right) nearby Caybasi stream which is crossed by an old bridge known as Kirmizi Kopru (Red Bridge)

The famous story of the transformation of Niobe, the daughter of Tantalus, had for its foundation a phaenomenon extant in mount Sipylus. I shall give an account of this extraordinary curiosity. The phantom may be defined, an effect of a certain portion of light and shade on a part of Sipylus, perceivable at a particular point of view. The traveller, who shall visit Magnesia after this information, is requested to observe carefully a steep and remarkable cliff, about a mile from the town; varying his distance, while the sun and shade, which come gradually on, pass over it. I have reason to believe he will see Niobe.
Richard Chandler - An account of a tour made at the expense of the Society of dilettanti - 1775
Achilles then went back into the tent and took his place on the richly inlaid seat from which he had risen, by the wall that was at right angles to the one against which Priam was sitting. "Sir," he said, "your son is now laid upon his bier and is ransomed according to desire; you shall look upon him when you (take) him away at daybreak; for the present let us prepare our supper. Even lovely Niobe had to think about eating, though her twelve children - six daughters and six lusty sons - had been all slain in her house. Apollo killed the sons with arrows from his silver bow, to punish Niobe, and Diana slew the daughters, because Niobe had vaunted herself against Leto; she said Leto had borne two children only, whereas she had herself borne many - whereon the two killed the many. Nine days did they lie weltering, and there was none to bury them, for the son of Saturn turned the people into stone; but on the tenth day the gods in heaven themselves buried them, and Niobe then took food, being worn out with weeping. They say that somewhere among the rocks on the mountain pastures of Sipylus, where the nymphs live that haunt the river Achelous, there, they say, she lives in stone and still nurses the sorrows sent upon her by the hand of heaven. Therefore, noble sir, let us two now take food; you can weep for your dear son hereafter as you are bearing him back to Ilius - and many a tear will he cost you."
Homer - The Iliad - Book XXIV - Translation by Samuel Butler
See a group of statues portraying Niobe and her children which was found in Rome in 1583. 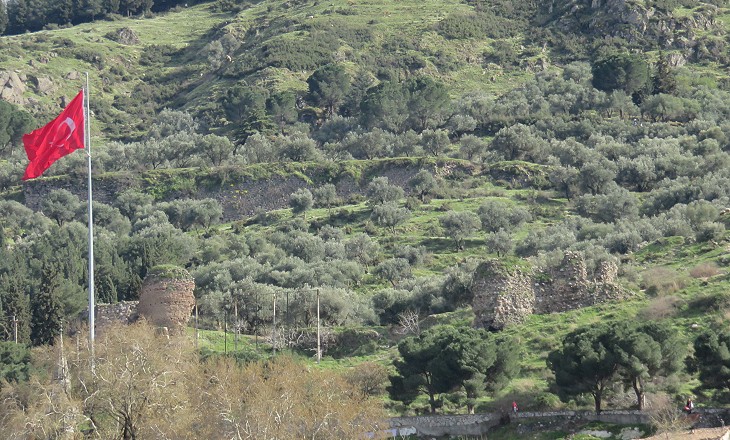 Upon a cliff occupying the exact centre, and much lower than the others, are ruinous embattled walls girding the summit, which are the outworks of a fortress of singular strength on the site of the acropolis, and erected by the princes of the Nicean dynasty, upon the Gothic model, in the thirteenth century. Dallaway
The Byzantine walls on the hills south of the town are the main evidence of Manisa's past, because the location of the Roman monuments has never been identified. 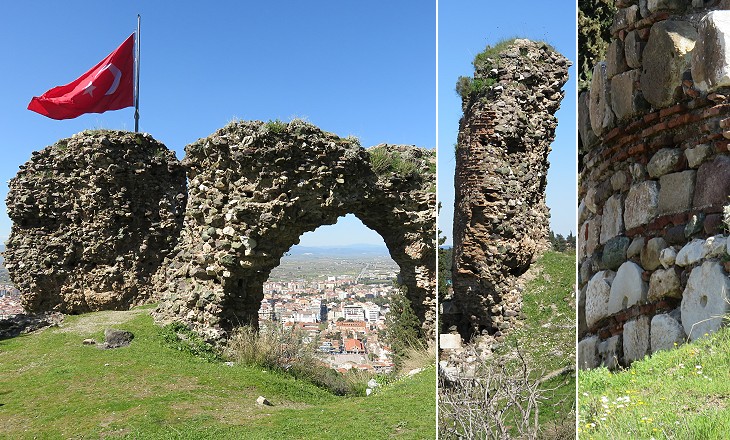 The castle-hill is exceedingly high, the ascent steep and tiresome, with loose stones in the way. By the track is a fountain, with a broken inscription, and earthen pipes, which convey water down to the city. It is a mean fortress, abandoned, and in ruins. Chandler
The Byzantine walls were built in different periods; the oldest ones are those in opus caementicium, a sort of concrete which has proved very solid and was faced with small bricks. Eventually other walls were built making use of materials taken from ancient buildings. See a page on Roman construction techniques. 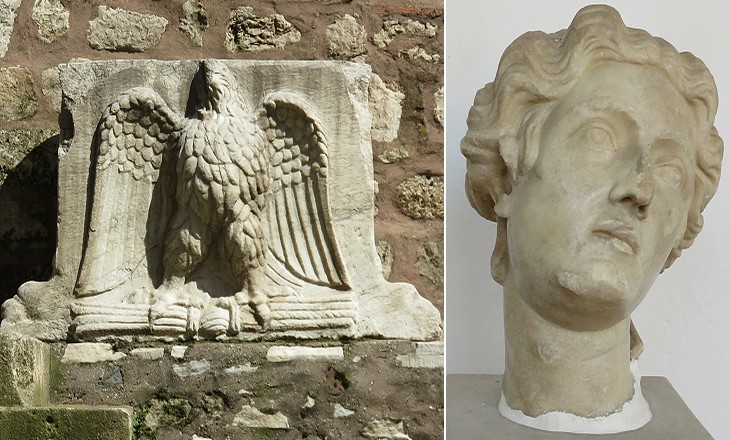 Archaeological Museum of Manisa: (left) a marble relief of a Roman eagle, from the ancient synagogue of Sardis. The eagle holds fasces, a bundle of wooden rods which was a symbol of power; (right) head of a woman

We were, in fact, several centuries too late for antiquities at Magnesia; for when any public work was erected by the Turks, all the external blocks of marble of great edifices were rehewn, and modelled to their taste. The shafts of columns only, not their heterogeneous capitals, have escaped such barbarism. Dallaway
Manisa is situated in the valley of the River Gediz (ancient Hermos) which is a natural passage between the Aegean Sea coast and the tableland. Its Archaeological Museum houses many interesting reliefs and statues found in ancient towns in the River Gediz valley, chiefly at Sardis. 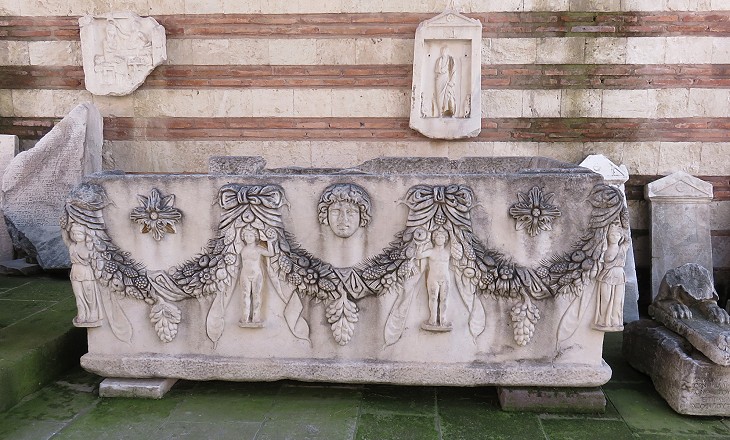 The common decorative features of the series to which our sarcophagus belongs are the repeated design of garlands of fruit or foliage. The festoons are bound by ribbons held up by animal heads or cupids standing on brackets or pedestals. The space above the garlands might be carved with rosettes or Medusa heads, and the pendant consists of a bunch of grapes.
Anna Marguerite McCann - Roman Sarcophagi in the Metropolitan Museum of Art, New York - 1978.
During the IInd/IIIrd century AD many sarcophagi were made by workshops in Asia Minor and then sold in other parts of the Roman Empire. Their manufacturing/marketing process is an early example of factory production (rather than made to order) system. Sarcophagi with festoons, because of the genericity of their decoration, had a wide market and constituted the commonest type of expensive sarcophagus of the time. You may wish to see similar sarcophagi found at Iasos and in Libya or a page on Roman funerary rites. 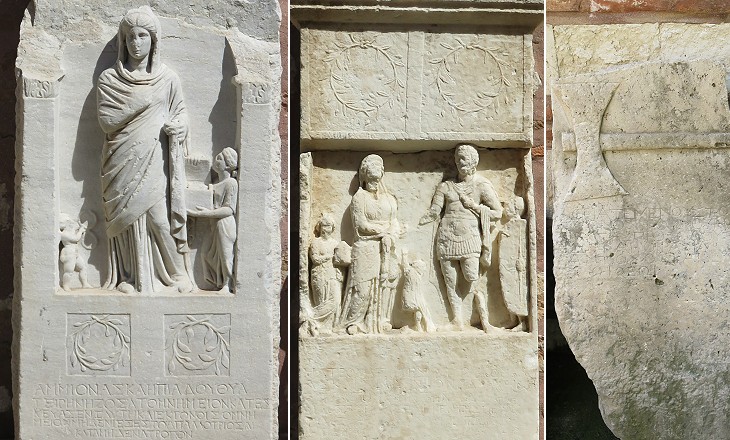 Archaeological Museum of Manisa: gravestones one of which shows a "labrys" (double-headed axe), most likely a sign of devotion to Zeus Labraundos, a local god who was portrayed holding this weapon; see a similar relief at Milas

Small gravestones were usually made to order and their decoration had references to the age, sex and status of the dead. They often included inscriptions which shed light on the life of the deceased and on interesting aspects of society. 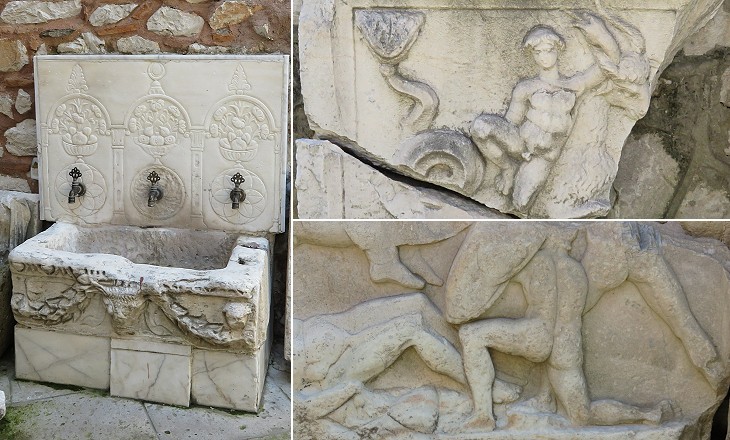 Archaeological Museum of Manisa: details of sarcophagi, one of which was included in an Ottoman fountain

The image used as background for this page shows an ancient capital in Ulu Cami, one of the three Great Mosques of Manisa which are covered in page two; page three shows other monuments of the town.