Milas, ancient Mylasa, was one of the most important towns of the region known as Caria. For some time it was ruled by the Persian governors of Halicarnassus (Bodrum); later on it fell into the sphere of influence of Rhodes. In 129 BC it became part of the Roman province of Asia.

Milas is one of the few ancient towns of the region which was not abandoned during the Middle Ages: a few memories of its ancient past can be seen here and there in the modern town. Only a few stretches of the walls have not been pulled down or incorporated into houses.

Gate of the Axe: today (left) and in an XVIIIth century watercolour (right)

Luckily one of the Roman gates has survived to our time: it had the shape of a triumphal arch and it was decorated with a small Labrys, a double-headed axe: it was a symbol of Zeus who used it to invoke storms.

In the IInd century AD a very wealthy citizen of Milas built an interesting funerary monument on a hill overlooking the town. It is thought to be a replica on a smaller scale of the Mausoleum at Halicarnassus, a lost Wonder of the Ancient World. "Gumuskesen" is a Turkish word meaning silver purse or box, maybe because the white marble of the monument had a shining appearance when seen from a distance.

Storks have a predilection for ancient monuments; they did not miss a beautiful Corinthian column which is the only remaining one of a temple built on a high platform. It is located near the very busy market at Milas.

(left) Ancient stones on the wall of a mosque; (centre) ancient column in the porch of another mosque; (right) garden of the local museum

Milas knew a second period of prosperity towards the end of the XIIIth century when it was ruled by the Mentese emirs; the mosques built in that period were decorated with slabs taken from ancient buildings and also some columns were used to support porches and halls. A small museum houses the findings of recent excavation campaigns.

Arches of the Roman aqueduct

In town one can see arches of a Roman aqueduct which have been used as walls of houses or as stables; other arches give a Roman countryside touch to the landscape east of Milas. 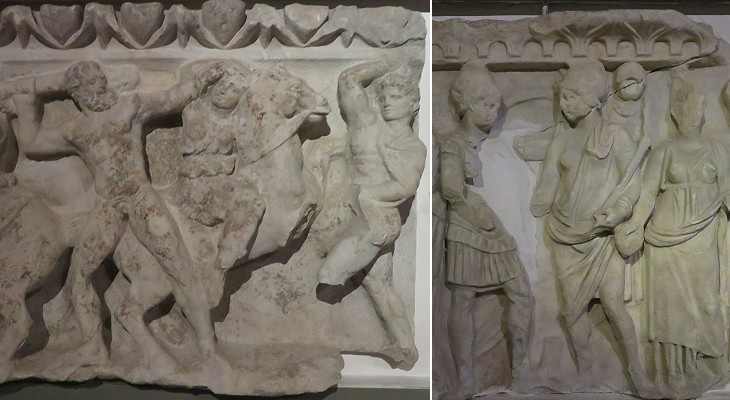 Archaeological Museum of Istanbul: details of the decoration of a Temple to Hecate at Lagina, an ancient town near Milas: (left) battle with the Amazons; (right) a Carian soldier and a personification of Rome shaking hands. The frieze is dated late IInd/early Ist century BC

The Mentese emirs strengthened a fortress built by the Byzantines a few miles south of Milas on the road leading to the sea, most likely to protect the town from Arab raids. The emirs placed their residence inside the fortress which became the capital of their state.

Becin Kalesi: (left to right): the tower protecting the entrance; ancient lion heads on the walls of the tower; steps of a temple; a stone which had an inscription

At the beginning of the XVth century the emirs moved their residence to a new location near ancient Miletus. In 1426 this small state was incorporated into the Ottoman Empire.

While inside the fortress very little is left, some buildings near the fortress give an idea of the architecture of that period.

The image used as background for this page shows the capital of a pillar at the Gumuskesen Mausoleum.