along the ancient aqueducts
(arches of Aqua Claudia)

It. porta means door, gate so one may believe Porta Furba to be one of the openings in the Walls of Rome. It is a gate in the sense that it has the appearance of a gate, but the walls of Rome are miles away. 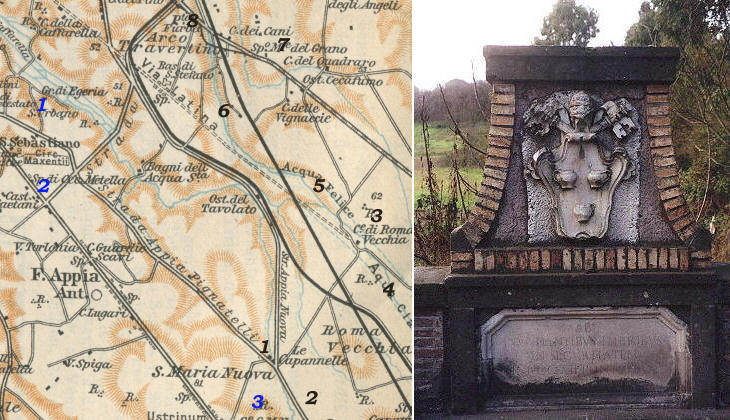 This walk starts at the junction between Via Appia Pignatelli and Via Appia Nuova where a coat of arms celebrates the improvements made by Pope Innocent XII to an existing path which linked Via Appia Nuova to ancient Via Appia and to Porta S. Sebastiano; from the inscription "Ab inundantibus imbribus in securitatem" we learn that the path was subject to being flooded; the improvements were made for the Jubilee Year 1700.

Tempio della Salute is the name given by Giovanni Battista Piranesi to a IInd century AD Roman tomb along Via Appia Nuova approximately one mile from its junction with Via Appia Pignatelli. The comparison between the etching by Piranesi and the actual monument shows how Piranesi dramatized the view by exaggerating the size of the ancient building and by adding some picturesque elements such as the shadow of a pyramid. The tomb is similar to other brick tombs along nearby Via Appia Antica. 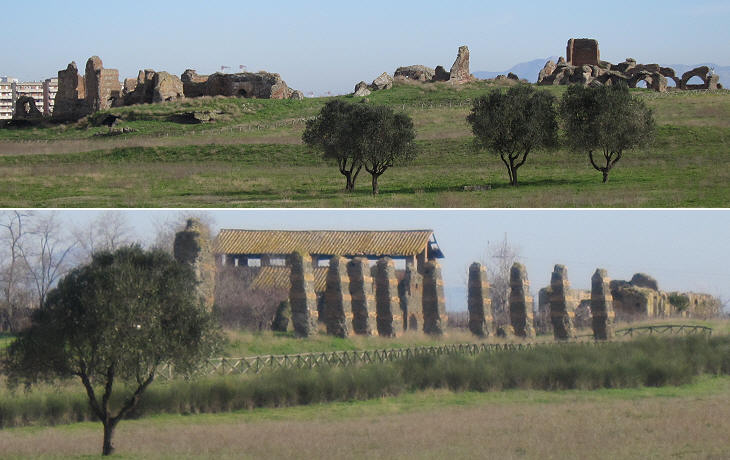 (above) View of the three main buildings; (below) ruins of the "carceres" which marked the starting line of the private circus

Roma Vecchia (Old Rome) was the name given to a series of imposing ruins spread between Via Appia Antica and Via Tuscolana (the latter runs almost parallel, 2 miles north of the former). They were thought to be the remaining evidence of a town which existed before Rome. Archaeological research has attributed these ruins to large villas built in the IInd century AD; Villa dei Quintili is located near Via Appia Antica, while Villa dei Sette Bassi borders on Via Tuscolana.
Sette Bassi is a corruption of Septimius Bassus, an owner of the villa at the time of Emperor Constantine. The wealth of the landlords is testified to by the presence of a private circus for chariot races; the carceres (cages) from which the chariots started the race were placed on a staggered line to take into account the impact of the circus curve (see how they were opened in a floor mosaic at Lyon). (above) View of the private aqueduct; (below) an isolated building which is thought to have been a guesthouse

The villa was supplied with water by a short aqueduct which branched off Aqua Claudia, the imposing aqueduct which carried water to the imperial palaces on the Palatine hill; this leads to the belief that the initial owners of the villa were relatives or close friends of Emperors Hadrian and Antoninus Pius, as the construction of the villa has been dated to their reigns. Ruins of building "A"

The main buildings are located near Via Tuscolana; the first one had a square shape with rooms around an internal courtyard with porticoes; the other two were added a short time later and they included reception halls and baths. 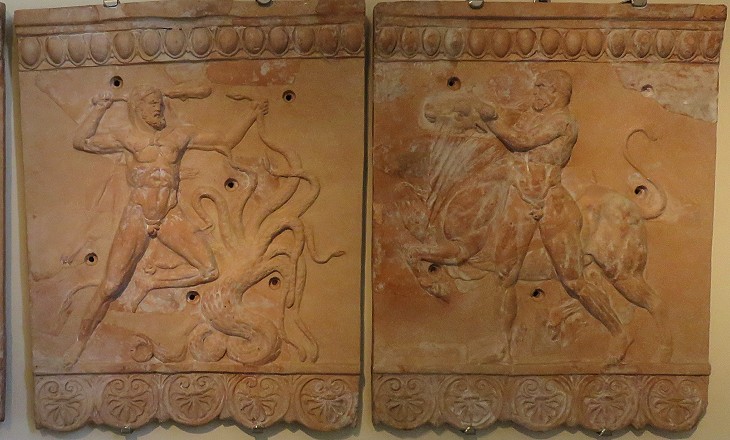 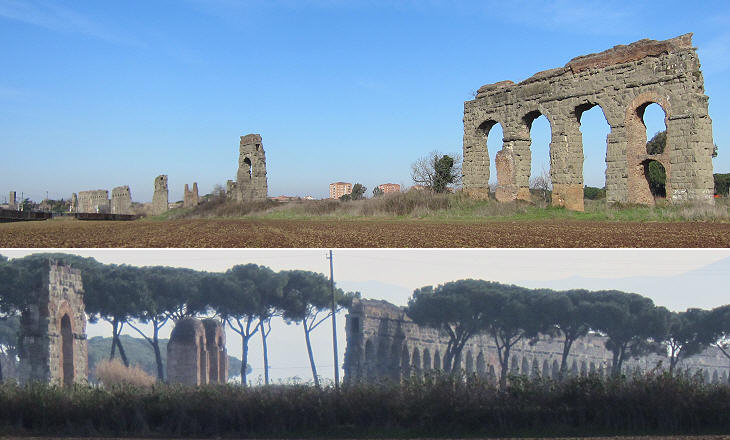 Views of Aqua Claudia: towards Tor Fiscale (above) and towards Villa dei Sette Bassi (below)

Dim in the clouds, the radiant aqueducts
Turn their innumerable arches o'er
The spacious desert, brightening in the sun,
Proud and more proud, in their august approach:
High o'er irriguous vales and woods and towns,
Glide the soft whispering waters in the wind,
And here united pour their silver streams
Among the figured rocks, in murmuring falls.

John Dyer - The Ruins of Rome - 1740
The ruins of the aqueducts were a common feature of all Grand Tour paintings showing the Roman countryside; in particular the ruins of Aqua Claudia, the aqueduct initiated by Emperor Caligula and completed by Emperor Claudius were depicted in the background of J. W. Goethe's portrait by W. Tischbein. 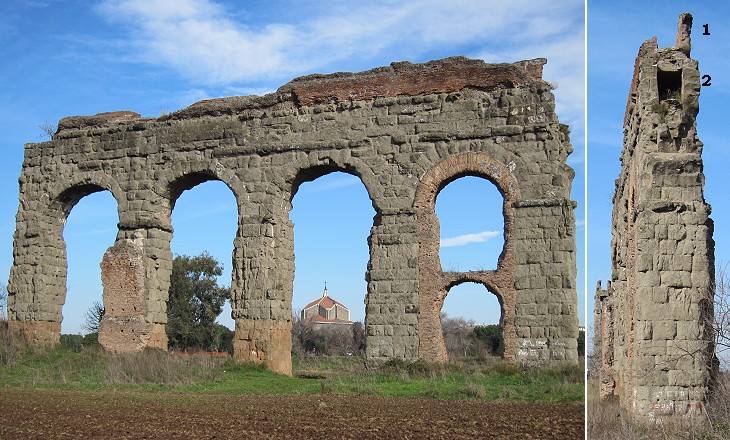 The arches carried the water of Aqua Claudia and Anio Novus from springs near Subiaco in the Apennine Mountains. The two aqueducts joined together some seven miles east of Rome; the completion of the aqueducts was celebrated with a triumphal arch, which eventually was turned into Porta Maggiore, one of the gates of Rome.
Ancient engineers did not neglect the artistic aspect of the aqueducts; they employed different kinds of stones to obtain colour effects (which have been taken into account in the design of a modern church near the aqueduct). 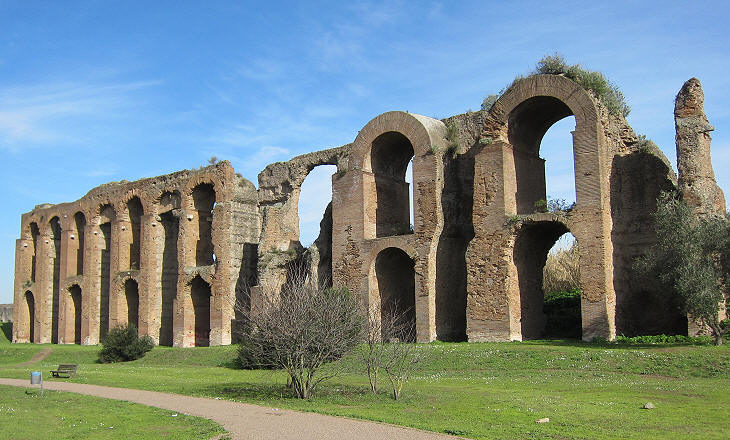 For the construction of very long aqueducts (45 miles in the case of Aqua Claudia), the Romans developed a series of instruments which anticipated those utilized by modern topographers; because the movement of water was due to gravity, it was necessary to ensure conduits had an appropriate and constant gradient throughout the whole length of the aqueduct: the gradients of Roman aqueducts ranged between 2 and 4:10,000; measurement equipment had to be very precise and foundations and arches very solid to achieve this level of tolerance. 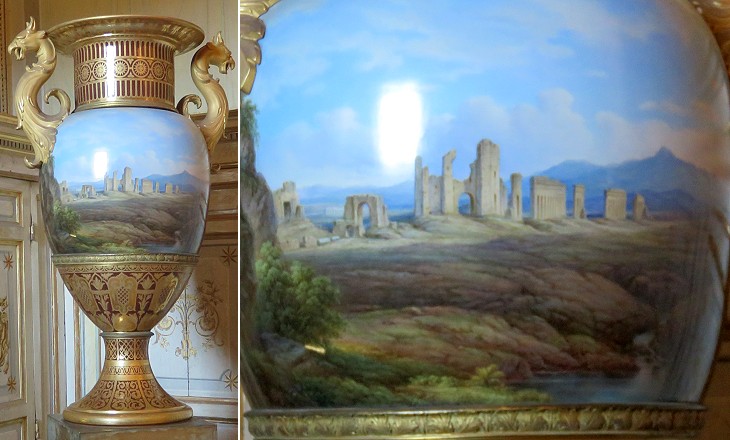 Musei Vaticani: porcelain vase donated by German Emperor Wilhelm I to Pope Pius IX with a view of the aqueducts 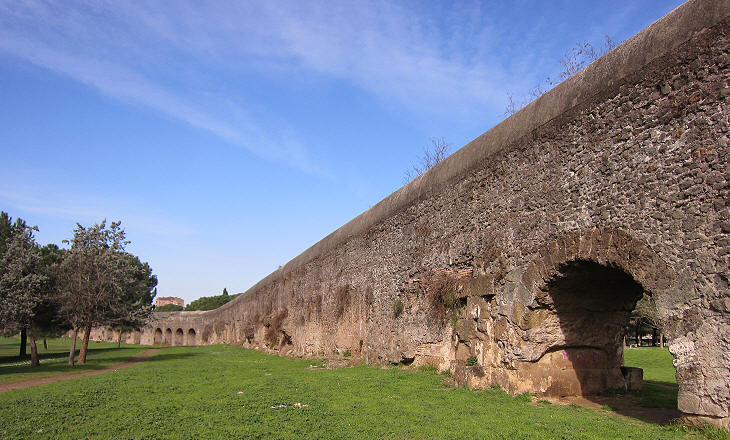 Similar to an ancient Roman Emperor, Pope Sixtus V (Felice Peretti) gave his name to a new aqueduct he built immediately after his election in 1585; Acqua Felice (It.) and Aqua Claudia (Lat.) run parallel towards Rome for many miles, but the low arches of the modern aqueduct are not as evocative as those of the ancient one.

Acqua Felice, by bringing water to the northern hills of Rome (Esquilino, Viminale, Quirinale), helped their development and increased the value of Villa Peretti, the Pope's large estate between S. Maria Maggiore and Piazza di Termini. It ended with a monumental fountain. 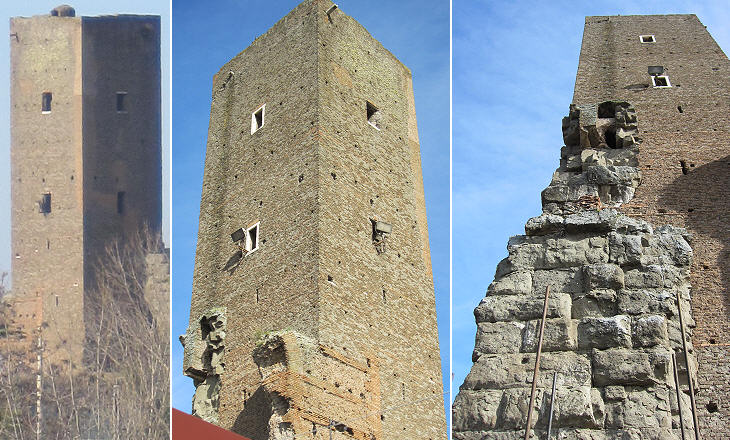 Tor Fiscale is one of the highest medieval towers one can see in the Roman countryside; it was built above an arch of Aqua Claudia; the area where it stands was known as Campo Barbarico, because during the Greek-Gothic War, the Goths established their camp in this location and they fortified it by closing the arches of the aqueduct; the conduits were damaged in order to turn them into battlements. At the end of the war Rome was so impoverished and its population so reduced that Aqua Claudia was not repaired. 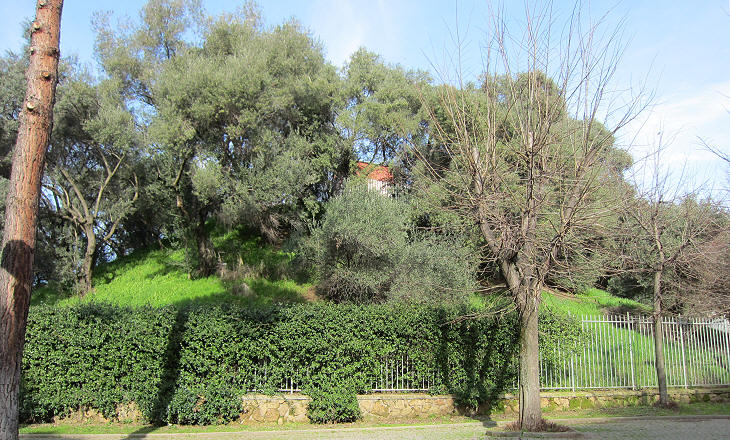 Monte del Grano (Hill of Wheat for its resemblance to a "modius", the Roman bushel)

Monte del Grano is an ancient large circular mausoleum which was deprived of its travertine decoration in the XIVth century; it is located on the northern side of Via Tuscolana; some archaeologists believe it was built for Emperor Alexander Severus, who, not far from this site, built an aqueduct. A corridor leads to a large underground hall where a sarcophagus with an assumed portrait of the Emperor and of his mother was found in the XVIth century (now at Musei Capitolini). The sarcophagus contained the Portland Vase (now at the British Museum). Etching by Giovanni Battista Piranesi showing the sarcophagus which was found at Monte del Grano; the box was decorated with a relief showing scenes from the life of Achilles 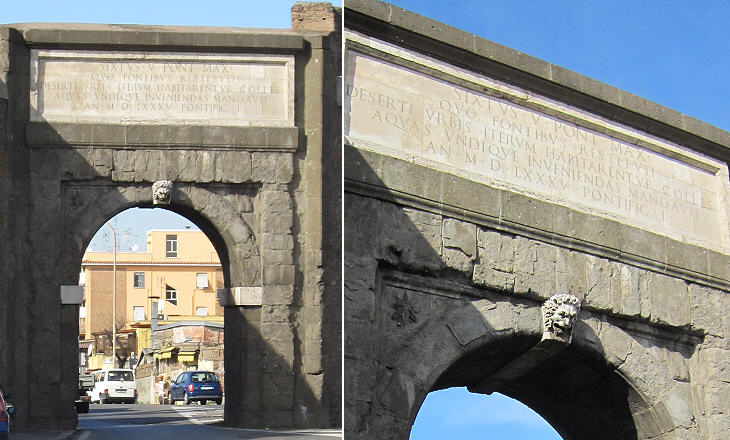 Pope Sixtus V celebrated the completion of Acqua Felice with a long inscription on the arch which crossed Via Tuscolana; the appellation of Furba, given to the arch/gate is obscure; the Italian adjective furbo means cunning and it does not seem very applicable to a gate; perhaps it was referred to cunning brigands, who robbed the passers-by at the gate.
Pope Sixtus V celebrated the completion of its aqueduct in a similar way near Porta S. Lorenzo. 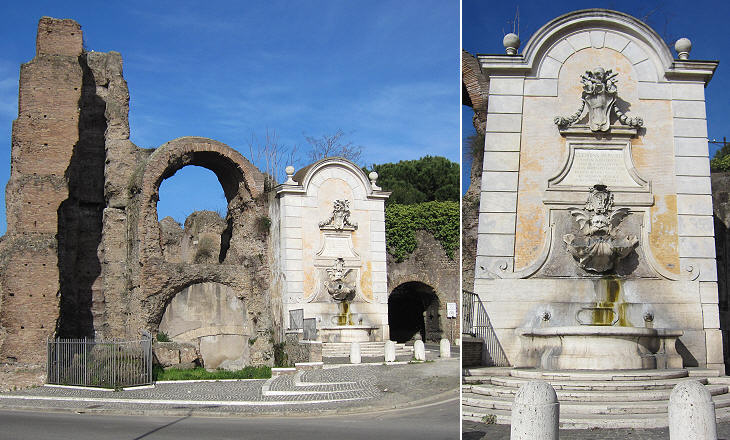